Give them any excuse, the people in Köln (Cologne) love to party at any time. It’s a wonder but no surprise this is where I find some of the happiest people in the country. As the calendar flips to a new year, the time heralds the annual shenanigans of the Kölner Karneval. For residents and visitors, two of the best-known landmarks in the city are the Kölner Dom (Cologne Cathedral) and the Hohenzollernbrücke (Hohenzollern Bridge).

Churches have always been at this location since Roman times when early Christians gathered to worship. Construction of the present cathedral began in 1248, and finally completed six centuries later in 1880. The ever-present appearance of scaffolding is a testament to ongoing renovations and reconstruction. The cathedral is the city’s second tallest structure, and can host up to twenty thousand people as an important historical and contemporary pilgrimage site. As one of the finest examples of Gothic architecture in the world, the Cologne Cathedral is a UNESCO World Heritage Site, recognized and inscribed since 1996. 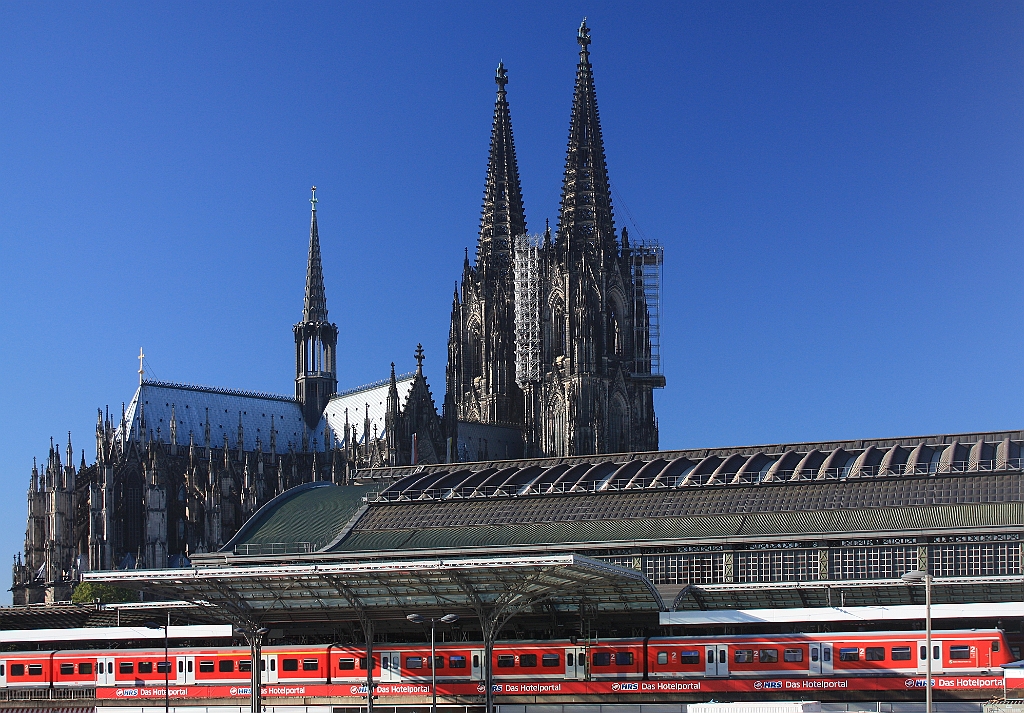 Cathedral towers above the city’s central station, from Breslauer Platz 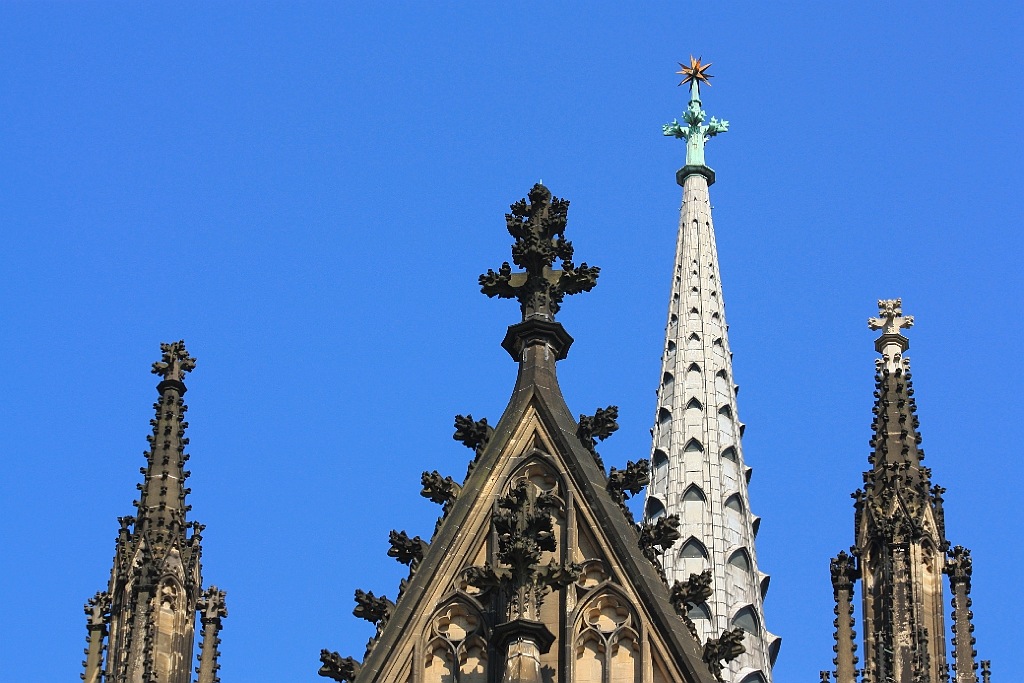 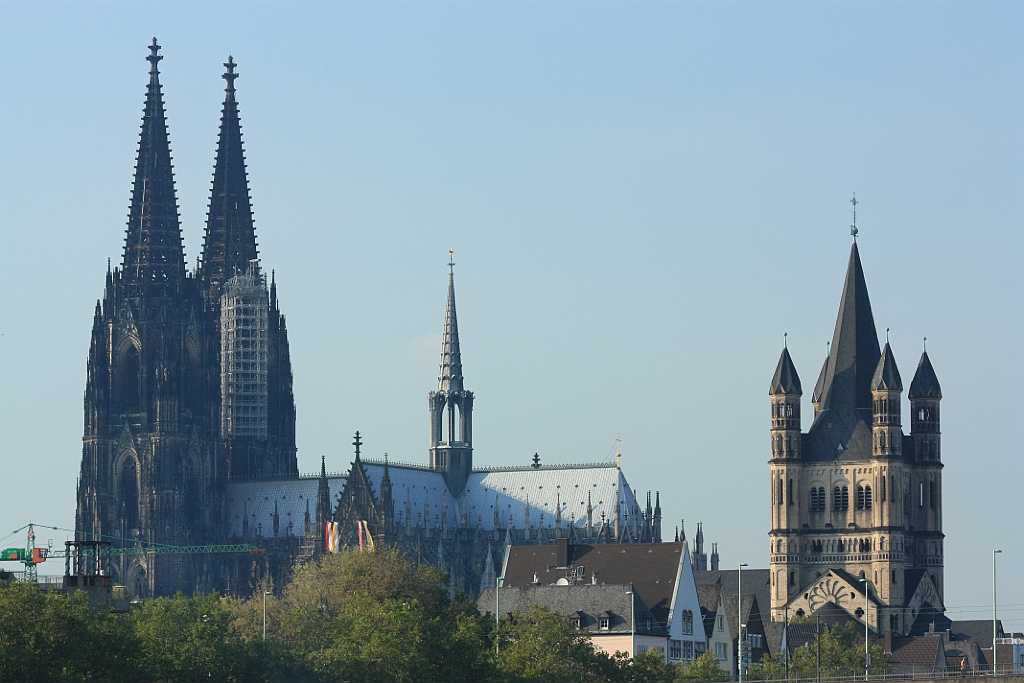 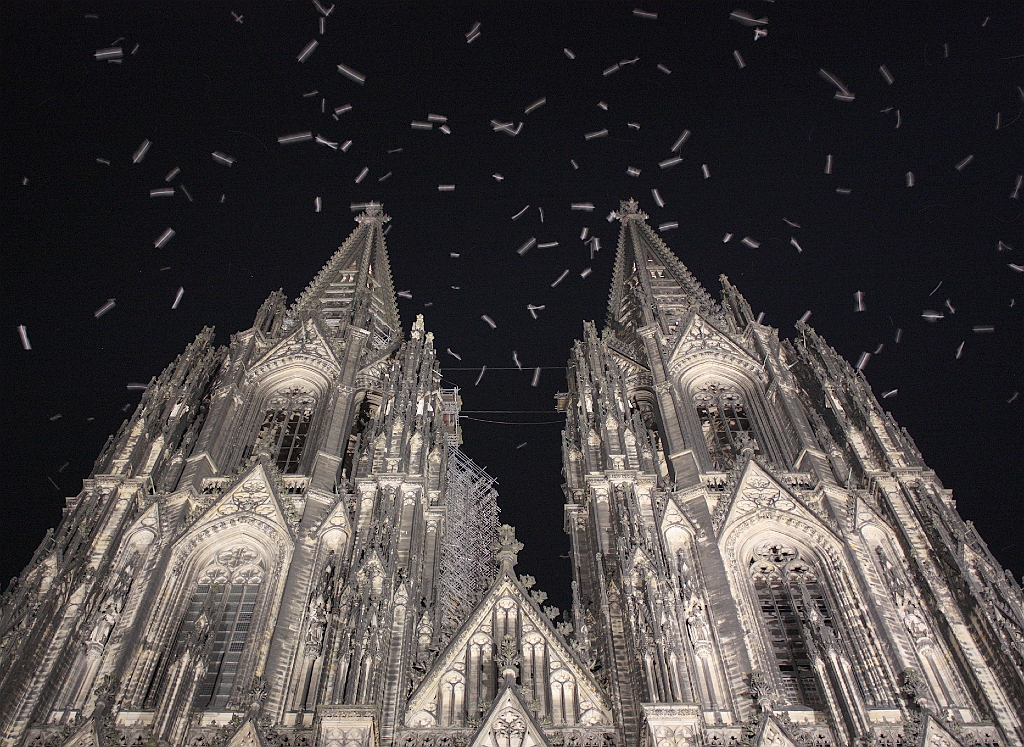 Over 1200 trains cross the Rhein river daily on the Hohenzollern Bridge which celebrated in 2011 its 100th anniversary1. The Deutsche Bahn rail bridge connects both sides of the Rhein river with the city’s central station (Hauptbahnhof) to the west and the city’s exhibition and trade fair complex (Messe) at Deutz to the east. The Hohenzollern Bridge was built between 1907 and 1991, carrying trains, cars, and streetcars. Reconstruction was completed in 1959 after destruction in the Second World War. Carrying only trains and pedestrians, the present-day bridge provides great views of river traffic, as well as access to views of both cathedral and bridge, by day or at night. 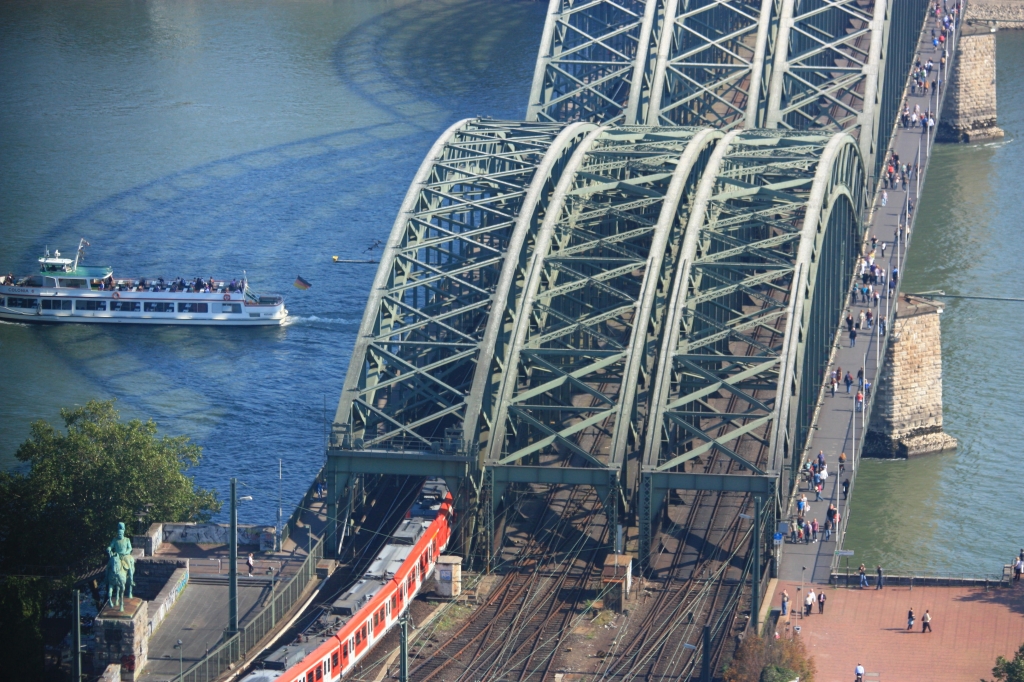 Hohenzollern Bridge, from high up in the Cathedral 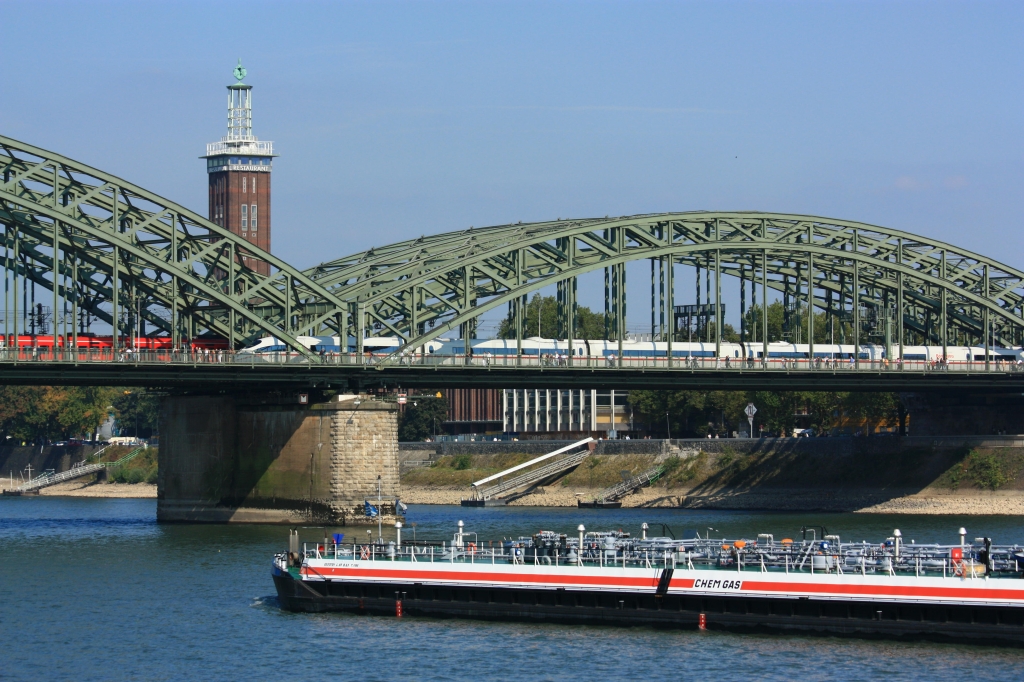 Multimodal transport: on foot, by boat, or by train 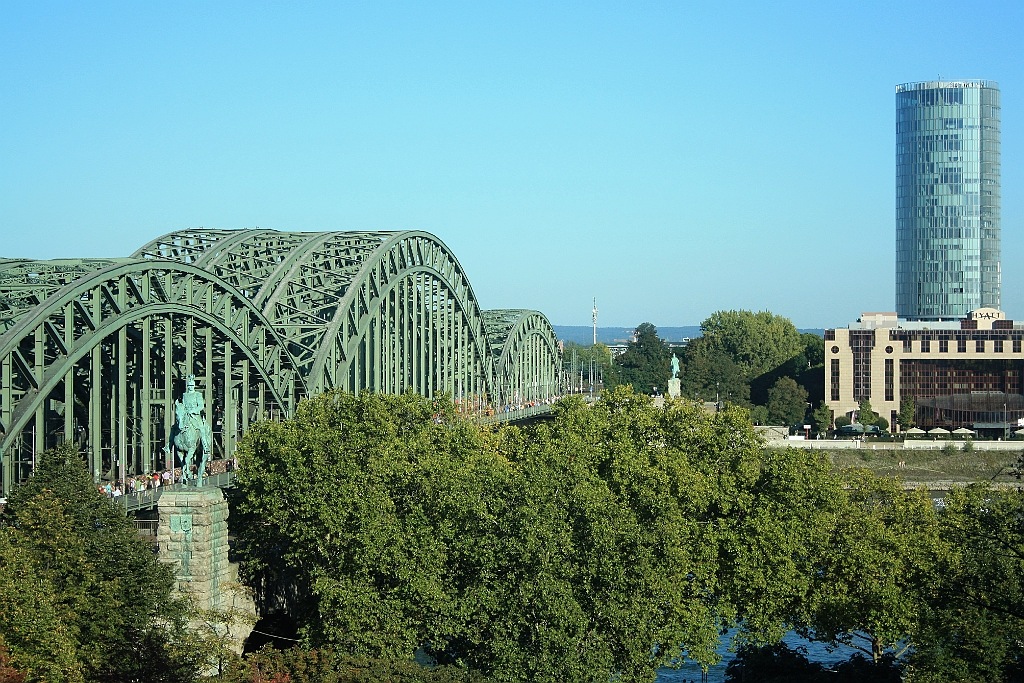 Hohenzollern Bridge east to Messe/Deutz, from inside Museum Ludwig 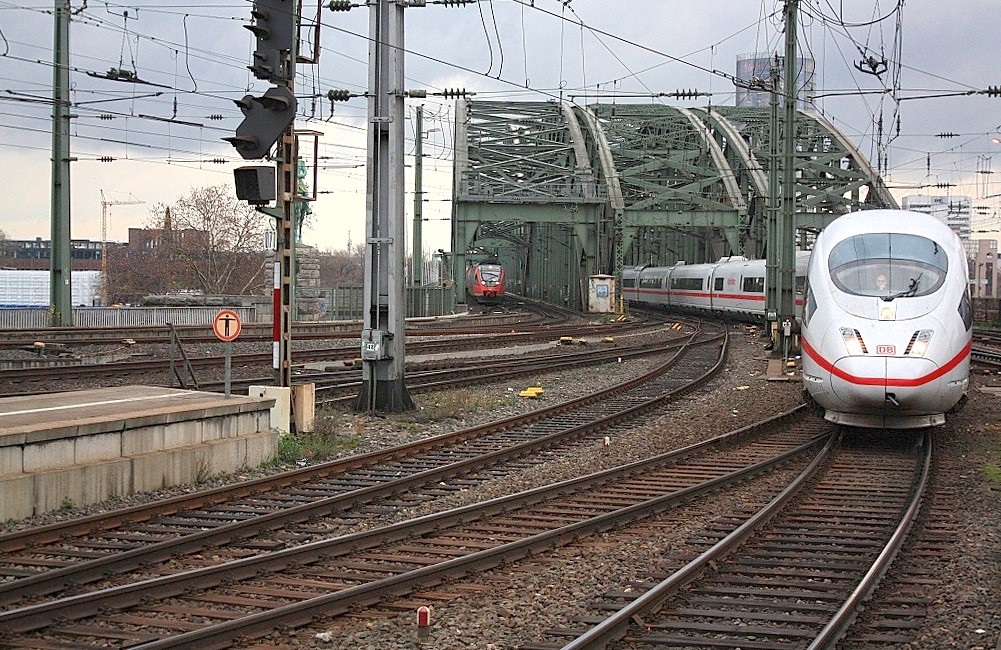 I made the photos above between 2009 and 2013. This post appears on Fotoeins Fotopress at fotoeins.com as http://wp.me/p1BIdT-16t.