You’re excited – you’ve finally arrived in Germany. You’ve decided to travel the country by train, but you’re not familiar with the German language, and you may find the signs puzzling and difficult to read.

The following is a short visual descriptive guide to signage at German train stations to help get you on your way. Examples below are taken from Frankfurt am Main Hauptbahnhof (central or main train station), although descriptions should apply similarly at other stations.

Below are descriptions to:

Where is my train?

Information on the departures board appears as white block lettering on a dark blue background. From left to right in the photo below, there are six primary columns of information:

The departures board above shows Regional Bahn train RB 15231 leaving at 830pm (2030h) for Aschaffenburg from platform 12, with stops at F-Ost (Frankfurt Ost) and Maintal Ost. There’s no additional information which means the train is scheduled to depart on time. 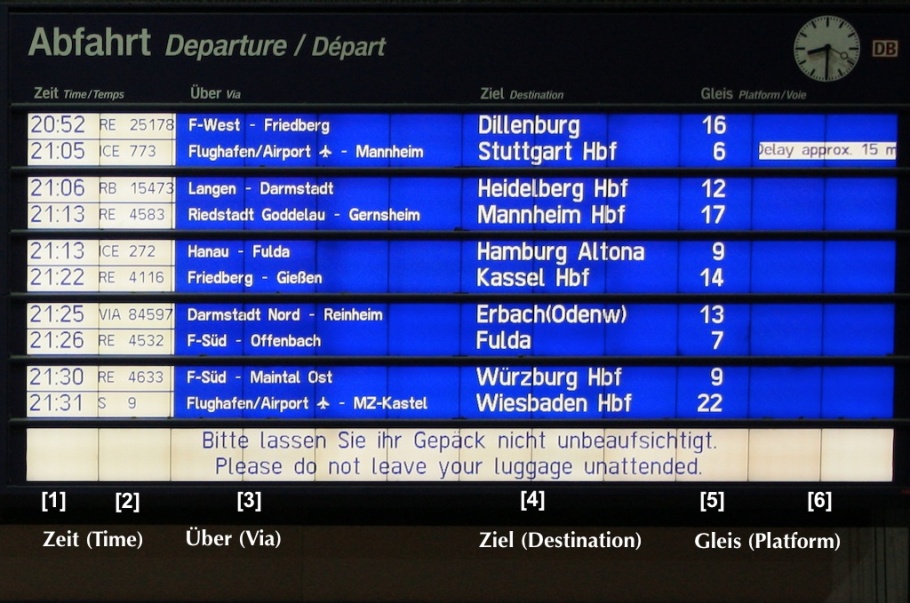 The other departures board shows InterCity Express ICE 773 leaving for Stuttgart from platform 6 at 905pm (2105h), with stops at Frankfurt Airport (Flughafen) and the city of Mannheim. There’s an additional note that the train is about 15 minutes late, putting the departure time to about 920pm.

Above every platform are overhead digital signs to confirm what travelers might see on the central board. The signs also appear as white lettering on a blue background. Occasionally, two trains will share the same platform which the signage will also reflect. Highlighted sections will correspond to the appropriate train; take note that you board the correct train.

The following are examples of daytime departures from platforms 8 and 9.

From platform 8, InterCity Express train ICE 76 leaves at 1158am for Kiel Hauptbahnhof (Hbf), with stops in Kassel-Wilhelmshöhe, Göttingen, Hannover, and Hamburg Hauptbahnhof. There’s a five-minute delay, pushing the departure time to about 1203pm.

Every platform is “divided” into sections, which are also labeled with overhead signage (A, B, C, etc.) indicating where you are along the platform. The electronic sign also shows how the train itself is divided. 1st-class cars are in section A, the dining car is in section B, and the rest of the train consists of 2nd-class cars from sections C through E. 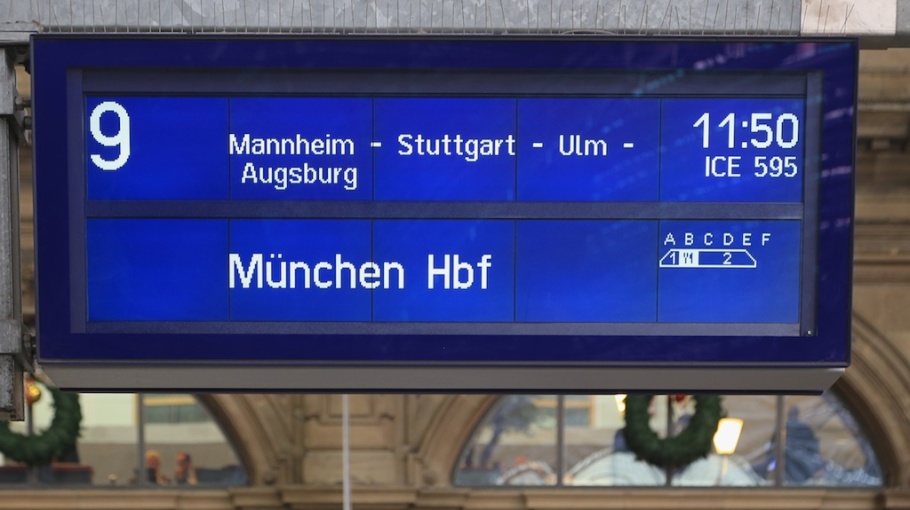 From platform 9, InterCity Express train ICE 595 leaves at 1150am for München (Munich) Hauptbahnhof, with stops in Mannheim, Stuttgart, Ulm, and Augsburg. The sign above shows that first-class cars are along section A, the dining car along section B, and the rest of the train consists of second-class cars from sections C through E.

What is my train?, at night.

It’s 917pm, but the 910pm train from platform 8 hasn’t departed. I’ve labeled the train ICE 526, overhead signage indicating platform sections ‘A’ and ‘B’, as well as the familiar red and blue Deutsche Bahn ticket machines. It’s preferable (and often cheaper) to purchase a ticket before boarding the train; the ticket machines have multilingual options and sell tickets for regional and long-distance trains.

In fact, ICE 526 heading to Dortmund Hauptbahnhof is approximately 5 minutes late, which means this train is about to leave at any moment. The train makes stops at Flughafen Frankfurt am Main Airport and in Köln (Cologne) at Messe/Deutz station. Note that 2nd-class cars are located along sections A and D, dining cars at sections B and E, and 1st-class cars at sections C and F

Some of the latest installed information signage includes multiple trains: the current train at the track, and the next two trains to appear at the same track.

In the image above from Dresden Hauptbahnhof, we see that at track 2 train IC2446 is scheduled to depart at 1720h (520pm) for Hannover Hauptbahnhof, via Leipzig and Halle an der Saale. The next two trains are also on display. Train RB31 to Elsterwerda-Biehla originally scheduled to leave track 2 at 1708h is delayed by 5 minutes (+5) and is leaving from track 1 instead. At 1744h, train RB31 is arriving from (von) Coswig near Dresden.

Where is my coach or car?

If you’ve purchased a ticket with assigned seating in a specific coach or car, you have to locate the correct coach for the train. Every station platform has a large sign “Wagenreihungsplan” or “Wagenstandsanzeiger”, describing how coaches are sequenced for each train leaving from that platform.

Coaches in green are 2nd-class cars, coaches in yellow are 1st-class cars, and coaches in red are dining cars. Every coach is labeled by a number. The short black arrow next to the train’s locomotive engine indicates the direction of the train leaving the station. In the sign shown above, coaches next to platform sections C, D, E are at the “front” of the departing train at Frankfurt station.

But where am I; where is the location of this “Wagenreihungsplan” signage? The answer is given by the red dot and red vertical line; they indicate I’m standing between platform sections B and C.

Train IC2297 leaves platform 12 at 820pm (2020h) for Stuttgart. However, there are three rows for the same train number, indicating different coach sequences for different days of the week. The train indicated by the black asterisk is assigned for departures Monday to Wednesday (Montag bis Mittwoch) inclusive. Where the red vertical line intersects this row shows that the “Wagenreihungsplan” signage is located opposite 2nd-class coach number 6. The coach sequence is different for Thursday (Do) and Saturday (Sa) departures.

At times, you may hear a public announcement and/or see a notice on the overhead track signage about changes to the coach sequence: namely, 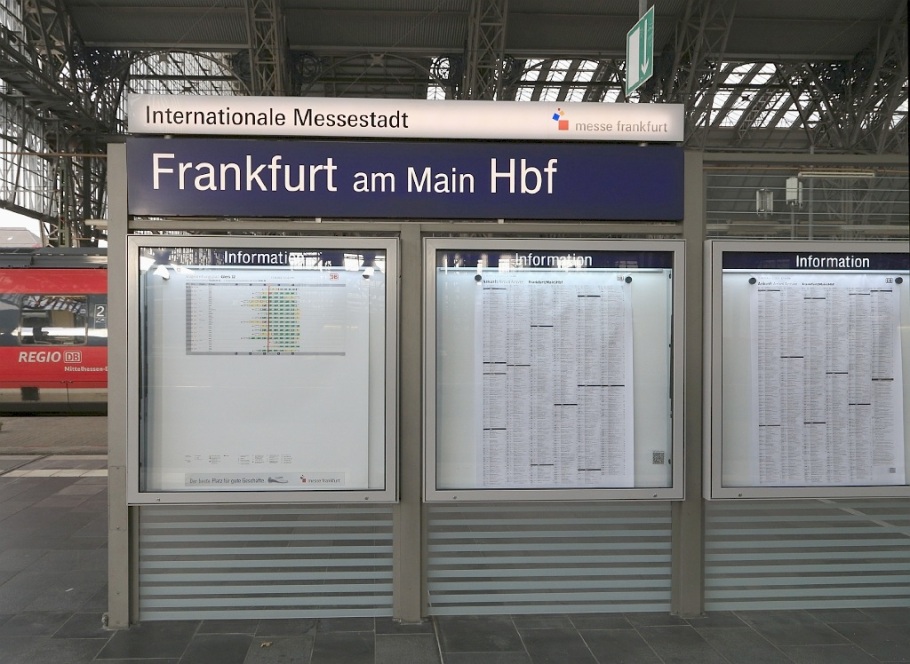 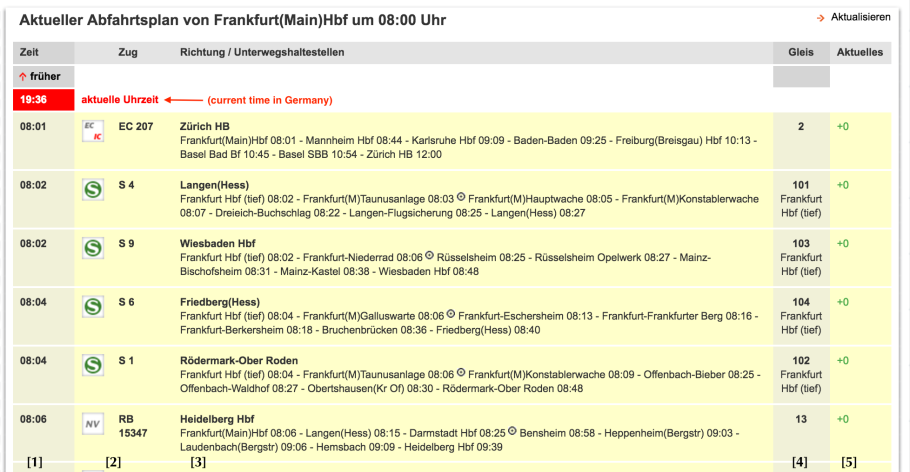 8am departures information (in yellow), Frankfurt am Main Hauptbahnhof.

Shown left to right are the labeled columns:

Departures examples from above:
at 801am, train EC207 will depart on time for Zürich from track 2. The train is scheduled to arrive at Basel central train station (Basel SBB) at 1054am and end in Zürich at 12pm. At 804am, regional S-Bahn trains will depart on time: S6 to Friedberg from track 104 and S1 to Rödermark from track 102. Both S-Bahn trains leave from “Frankfurt Hbf, tief” which is the lower or underground levels of the train station.

The Deutsche Bahn website also provides an updated to-the-minute online version of an arrivals and departures board here in German or here in English. Up-to-date information is given two hours in advance from your present time, including information about the assigned platform for arriving/departing trains and whether trains are early or late. Just like the printed-paper displays, arrivals and departures are shown on light-grey and yellow backgrounds, respectively.

I made the photos above at Frankfurt am Main Hauptbahnhof on 10 October 2009 and 20 November 2014. This post appears on Fotoeins Fotografie at fotoeins DOT com as http://wp.me/p1BIdT-6k7.

5 Responses to “How to read signage at German train stations”