I’m in Germany for the 18th consecutive year this May. But, back “home” bookends the bulk of my time in Austria with key visits to Innsbruck, Salzburg, and Vienna.

I’ve purchased a 2nd-class Eurail Austria-Germany Pass (adult) with 10 (+ bonus 1) non-consecutive days of travel inside an interval of two months. With my preference for open-ended travel over advanced purchase of individual point-to-point tickets, I will save over 500 dollars. Here I describe:

1.   One Pass or Multiple Tickets?

I’ve listed in the table below point-to-point fares. I checked fares for individual “legs” at Germany’s Deutsche Bahn and Austria’s ÖBB websites, taking note of the full range of 2nd-class fares in both “Spar” (saver offers) and “Flex” (flexible) price categories. The latest fare check occurred on 7 March 2018 with over 8 weeks to arrival. I estimated distances using Deutsche Bahn’s “Kursbuch” and Google Maps.

Assigned seating is not included in train fares; a reservation for a specific seat (Sitzplatzreserveriung) on a given train costs extra. I do not generally reserve a seat, but I also run the risk of boarding a very full train and I might have to stand for the entire duration.

For the most savings, I could purchase individual saver-fare tickets well in advance. The alternative would be flexible-fare tickets which are less restrictive but more expensive. The price difference between “saver” and “flexible” fare categories generally increases with longer distance journeys, especially beyond 200 km.

But I don’t want to be tied to a schedule to a specific train at a specific time; the rail pass has no such restrictions. If I decide at the last minute to stay longer or to leave early, maximum flexibility with the rail pass is the most important. I will save over 500 dollars (Canadian) on this trip with the Eurail Austria-Germany Rail Pass (2nd class).

If you’re unsure about whether a rail pass is right for you, determine your itinerary, and check the fares on the Deutsche Bahn website, as well as other national rail websites if you’re travelling to other countries. For example, you can read in English Deutsche Bahn’s conditions for saver fares and flexible fares, as well as Austria Rail’s conditions for Sparschiene and other tickets. For those living outside Europe, you can purchase your choice of rail pass from Rail Europe or Eurail.

* For rail between Salzburg and Vienna, the Eurail Austria-German rail pass is valid on both ÖBB and Westbahn trains; see participating rail companies for the Eurail pass. Check out Westbahn’s transport conditions (especially point 7.3) and their upgrade regulations.

Before boarding the first train, I head to the train station to look for the “Reisezenturm” (travel centre) with counters manned by agents who can validate my rail pass. Staff at the separate “DB Information” booth provides information about trains, but they cannot validate the rail pass; personal experience has shown they’ll direct you to the “Reisezentrum.” At the “Reisezentrum”, I get a ticket from an automated dispenser for my place in the queue. When my number is shown on the overhead display, I walk up to the assigned counter. Most agents will speak English if you ask “Sprechen Sie Englisch?” In most cases, your conversation will go something like this.

Agent, after filling out details and stamping the rail pass: “Bitte schön. Schönen Tag!” (Here you go. Have a good day!)

Shown is a 11-day Eurail rail pass for trains within Austria and Germany. Blue boxes show key details: Adult, Flexi 10+1 days within 2 months, 2nd class, for 357 Euros. The red numbers indicate parts of the rail pass which only an agent at a train station filled out:

As the passenger (purple “P” in the picture above), I write in the day and month for every day I want to use the rail pass. Trains are staffed by agents including fare inspectors, and they will “stamp” the column on the day of travel.

Not all trips “controlled” (stamped); final journey K-FRA on 4 June. 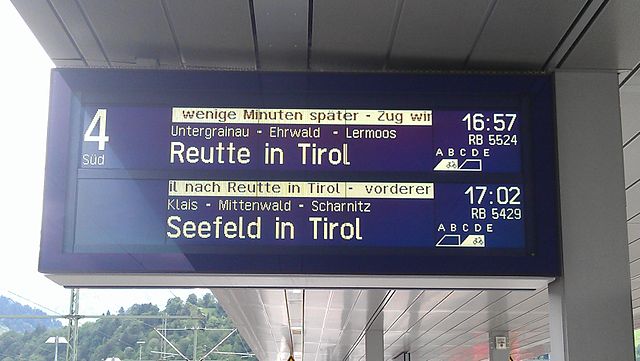 •   How to read signage at German train stations
•   The nebulous transition (racing the Rhein)
•   Summary of train travel, by The German Way

I have not received any compensation for writing this content, and I have no material connection to Deutsche Bahn, Österreichischen Bundesbahnen, or Eurail. This post appears on fotoeins DOT com as https://wp.me/p1BIdT-brL; last edit 14 Dec 2018.