Above: former wall at the northeast corner of the Roman fort Castra Regina. Photo by Dr. Bernd Gross (image no. 7, Wiki CC3).

Regensburg is situated in central Bavaria, and is 1 and 1.5 hours from Nürnberg (Nuremberg) and München (Munich), respectively, with the train. While meandering through the Regensburg’s Old Town, it’s easy to forget most of this area was once occupied by a Roman fortress about 1800 years ago.

In 179 AD/CE, the Roman Empire established the fortress “Castra Regina”, or “fortress by the river Regen”, where the Regen enters the Danube river. The Danube became in effect a part of the Roman Empire’s northern frontier (“Danube Limes”). Emperor Marcus Aurelius recognized the need for extra security in the northern imperial province of Raetia where the Danube’s course reached its northernmost point. To ward off incursions by northern Germanic tribes, up to six thousand soldiers from the Third Italic Legion were stationed at the fortress.

At peak operation, the fortress encompassed an area 540 metres by 450 metres (24 hectares, or 60 acres) with a wall up to 10 metres (33 feet) high made of large sandstone blocks, 18 towers, 4 double-tower gates, and a wide trench. Within the grounds were barracks, headquarters building (principia), commanding officer’s own residence (praetorium), a military hospital (valetudinarium), granary (horrea), workshops, and stables. Civilians and support tradesmen built a settlement to the west of the fort. By the 5th-century, constant raids and migrations forced the Romans to abandon the area. A civilian settlement eventually grew over the fortress which is today’s Altstadt (Old Town)1.

The free-of-charge open-air museum includes restored remnants of the old Roman fortress complete with information displays in both English and German. The primary information location is at the parking garage at Dachauplatz (which is closed at night); the other three locations are accessible outdoors at any time.

This location in Regensburg as one of many along the Roman Empire’s Danube Limes (border) has been on the Tentative List of UNESCO World Heritage Sites since 2015.

The map below shows the location of the Castra Regina encampment and locations of the “document Legionslagermauer” in the city’s Old Town. Click on the “arrow-window” icon at the upper-left corner of the map for additional details.

The Porta Praetoria in Regensburg and the Porta Negra in Trier are said to be the only two remaining original Roman city gates in Germany.

Porta Praetoria, from the west (HL) 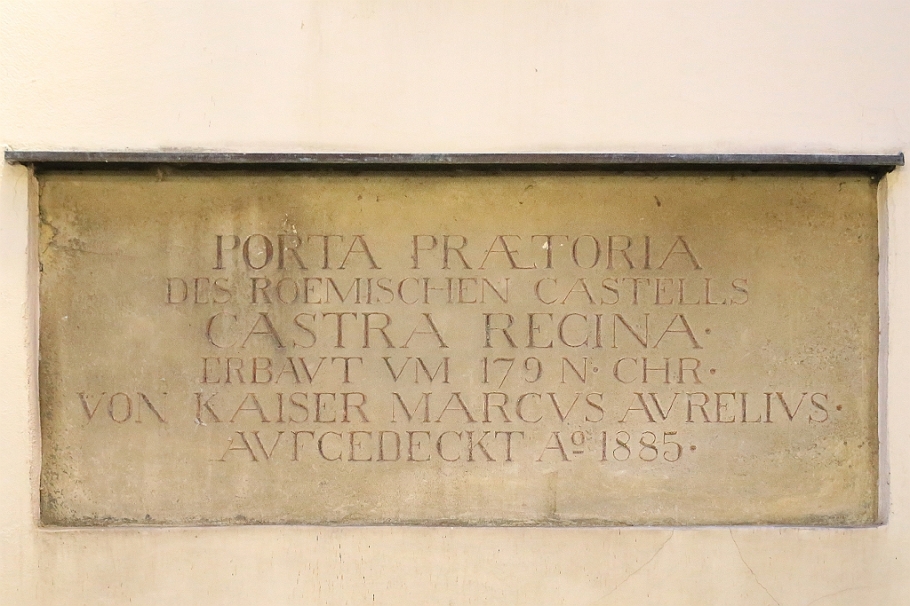 Uncovered and freely accessible wall fragments from the Roman fortress along the east section, the northeast corner, and southeast corner make up what is now the “document Legionslagermauer”. 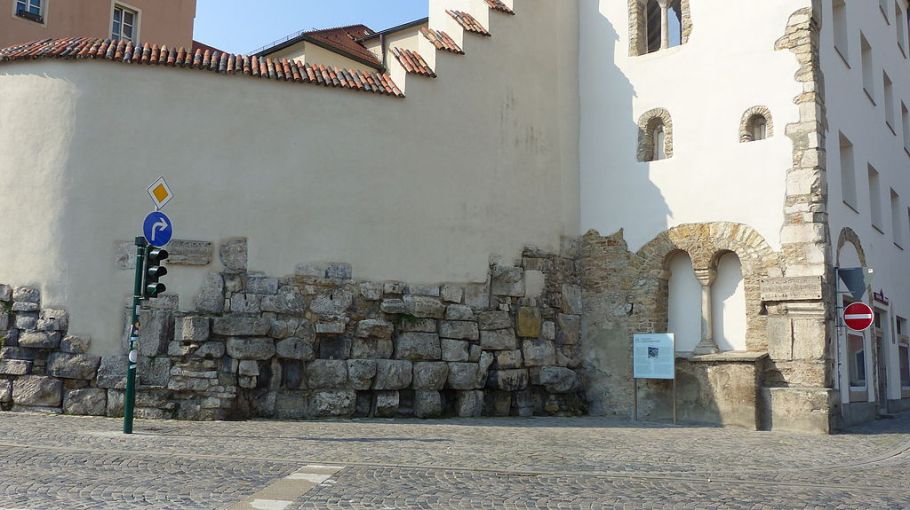 The parking garage for Markthalle Regensburg at Dachauplatz was built to incorporate the longest remaining sections of the fortress’ stone wall. This location also houses primary information displays for “document Legionslagermauer.” 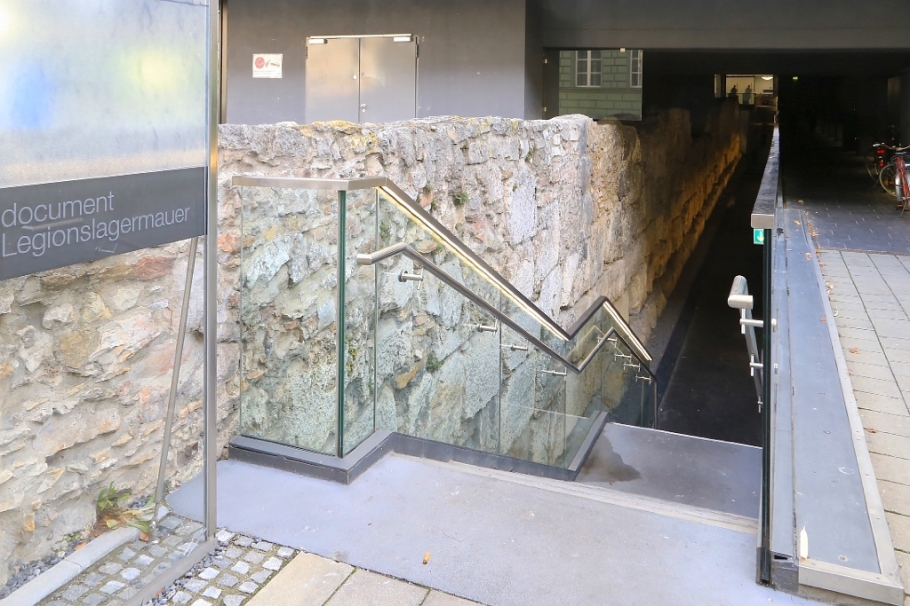 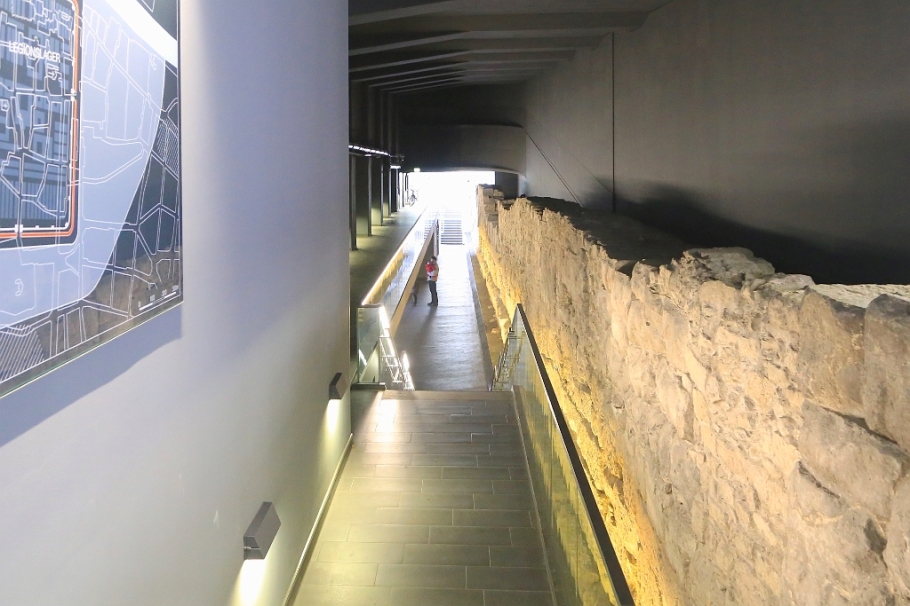 Uncovered and excavated in 1955 and 1961, walls at the fortress’ southeast corner were further renovated in 2013 to include new walkways and illumination. In places along this section there are medieval alterations to the original Roman construction. 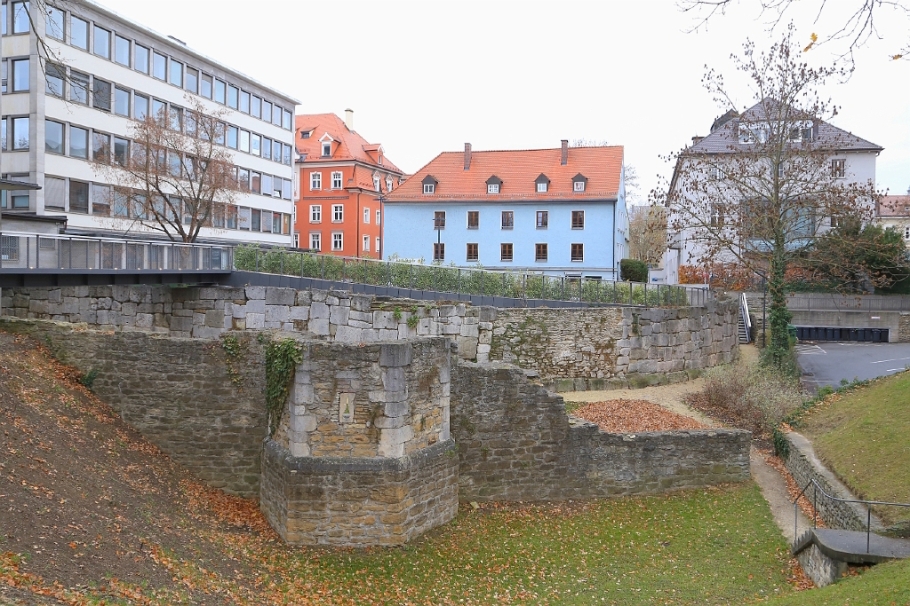 Some thirty years before Castra Regina’s completion, the following map around 150 AD/CE shows the Roman Empire’s northern territory in what is now southeast France, southern Luxembourg, southern Germany, western Austria, Switzerland, Liechtenstein, and northern Italy. Civitas Remorum (Reims, France) is at the upper-left; Lugdunum (Lyon, France) is at the lower-left; and Patavium (Padua, Italy) is at the lower-right. At the upper-right is Castra Regina (Regensburg) at the Empire’s northern frontier in the Roman province of Raetia whose capital was Augusta Vindelicorum (present-day Augsburg). 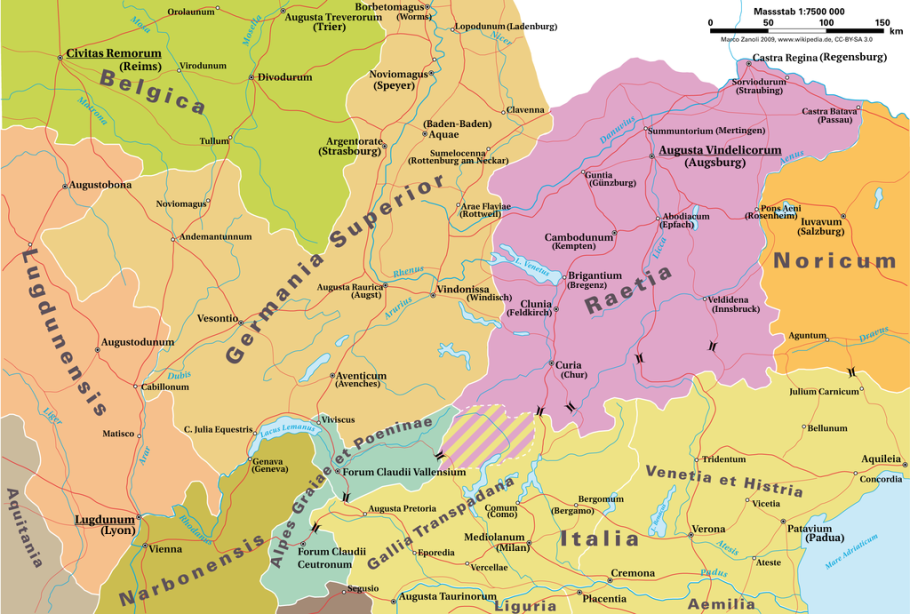 Northern Roman provinces, c. 150 AD/CE. Map by Marco Zanoli (Wik CC3). Castra Regina is located at the upper right of the map. Provincial administrative capitals are underlined, and I’ve added some present-day city names in parentheses. North is at the top of the map.

1 Regensburg’s Old Town along with Stadtamhof on the north side of the Danube have been inscribed on the UNESCO World Heritage List since 2006.

Thanks to Regensburg Tourism and Hotel Central Regensburg for their support and hospitality. I made the photos labeled “(HL)” with a Canon EOS6D mark1 on 13-15 Nov 2015. This post appears on Fotoeins Fotografie at fotoeins DOT com as http://wp.me/p1BIdT-808.

14 Responses to “Regensburg: remnants of Castra Regina on the Danube Limes”