How times have changed: I wouldn’t have given Dessau a second thought a time ago. But after speaking with representatives from Saxony-Anhalt and after spending a few days in the city, I’ve better understood the historical and cultural significance, and those who feel strongly about culture and history should give Dessau a chance.

Dessau is a German city of about 80-thousand people in the federal state of Saxony-Anhalt, and is known as the second capital of Bauhaus in the early 20th-century movement of modernism for design and architecture which has been given inscription as World Heritage Site.

If you’re in town to check out various Bauhaus sites, there’s a 2nd heritage setting over a vast green space. East of the Bauhaus Masters’ Houses are a set of Roman ruins marking the edge of Georgengarten (George Gardens); further in the park is the Schloss Georgium (Georgium Palace). Since 2000, both Georgengarten and Schloss Georgium are part of the UNESCO World Heritage Site that’s shared with the neighbouring city of Wörlitz.

Prince Leopold III Friedrich Franz (also known as Prince Franz, 1740-1817) was Duke of the Anhalt-Dessau principality, an Anglophile, and a cultural progressive for his time. Inspired by his experiences in his tour of multiple European countries, he asked his friend and architect Friedrich Wilhelm von Erdmannsdorff to transform and shape Anhalt-Dessau using ideas and principles of the Enlightenment to landscape design to build English-style parks along with structures in the early classical and neogothic architectural style. From about 1780 onwards, riverside forests, inland water passages, spacious low-lying meadows dotted with guard houses and pavilions characterize the appearance of the green space. In all, there are over 140 square kilometres (54 square miles) in the Gartenreich (Garden Realm, Garden Kingdom) which surround the former residences for the historical Dukes of Anhalt-Dessau.

In response to the park in nearby Wörlitz, Prince Johann Georg (John George) of Anhalt-Dessau, brother of Prince Franz, commissioned in 1780 the construction of a palace and garden which bear his name. The Georgengarten (George Gardens) is a beautiful English-style park in the Garden Realm, and the Schloss Georgium (George Palace) is now home to the Anhaltische Gemäldegalerie (Anhalt Picture Gallery). Established in 1927, the gallery’s core collection includes German and Dutch master paintings from the 15th to the 19th-century; check online to see if renovation activity has been completed and the palace reopened. The restored Orangerie (Orangery) now houses special exhibitions for the Anhalt Picture Gallery. Adjacent to the Orangery were former horse stables which is now home to the restaurant Gaststätte am Georgengarten.

With close proximity to the Bauhaus main building and the Masters’ Houses, a walk through George Gardens is a great way to clear the mind, enjoy the trees, get some fresh air, admire the layout of the green space today, and see why Dessau has listings for two UNESCO World Heritage Sites. 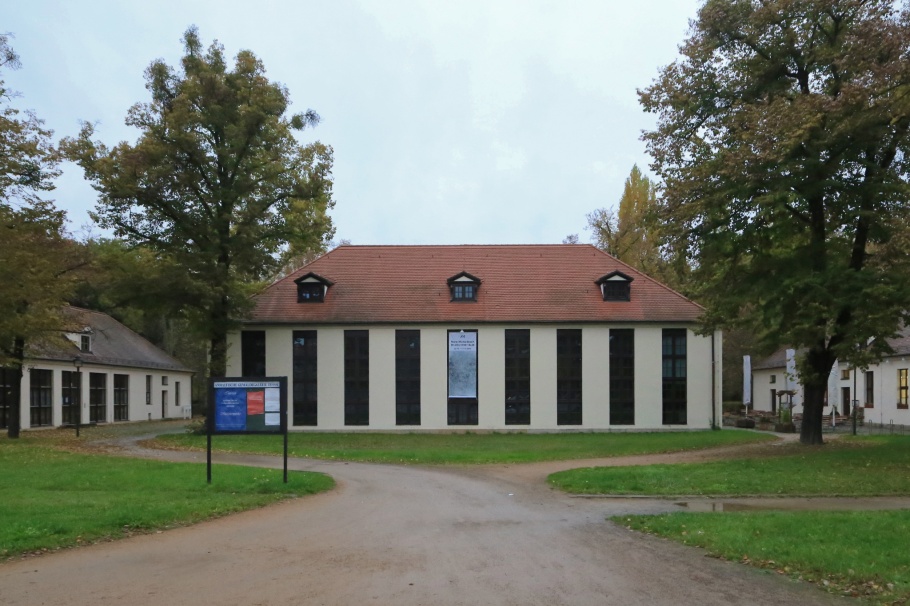 Front of the Orangerie building.

Back of the Orangerie building.

Georgium Palace (Schloss Georgium), with statues of Venus and Apollo in front.

Facing northeast, through the Sphingenportal (Sphinx Gate) to the Mausoleum in Tierpark.

At Dessau Hauptbahnhof (main train station), head to the west exit (Westausgang) and walk northwest along Seminarplatz to the Jobcentre building at Kleiststrasse. Turn right at Kleiststrasse and walk northeast to the multilane road called Puschkinallee. Cross Puschkinallee and you arrive at the former Orangerie building; the walk is 0.5 kilometre (0.3 mile). The park’s green space is free to enter; check the website for updates if you want to visit the buildings.

Thanks to IMG- and Sachsen-Anhalt-Tourismus, the city of Dessau-Rosslau, and the City-Pension Dessau-Rosslau for their patronage and access to facilities. IMG- and Sachsen-Anhalt-Tourismus supported my visit to the German federal state of Saxony-Anhalt from 25 October to 3 November 2016 inclusive. I made all photos above on 28 October 2016. This post appears on Fotoeins Fotografie at fotoeins.com as http://wp.me/p1BIdT-9gz.