Above/featured: it’s as if I just pointed out a famous meeting place to her right (left for the reader).

Prague’s Old Town Square is one of the most visited landmarks, dominated by the two tall spires of the Church of our Lady before Týn, Old Town Hall, and a prominent sculpture dedicated to Czech icon Jan Hus at the centre of the square.

At the southeast corner of the square is a building called (Dům) U Kamenného beránka or “At the Stone Lamb” at address Staroměstské námesti 551/17 #. To the right of the building’s main entrance is a memorial plaque with an inscription in both Czech and English. The memorial plaque was created by Czech sculptor Zdenĕk Kolářský and unveiled in 1998. Looking closer, you’ll recognize Albert Einstein’s face and his famous physics equation stating mass-energy equivalence and written in cursive script: E = mc2.

Over a 16-month period from 1911 to 1912, Albert Einstein lived in Prague with his family and was full professor of theoretical physics at the German Charles-Ferdinand University. Einstein enjoyed hanging out at a number of cafes for conversations, exchanges, and music, and he was a frequent visitor to this building where Czech liberal and intellectual Berta Fanta operated a literary-philosophical salon or lounge. The salon saw visits by many intellectuals, both domestic and international. “Domestic” writers Franz Kafka and Max Brod would have come here for the discourse as well, but it turns out little is actually known about whether all three arranged to meet or would have met here at the same time. 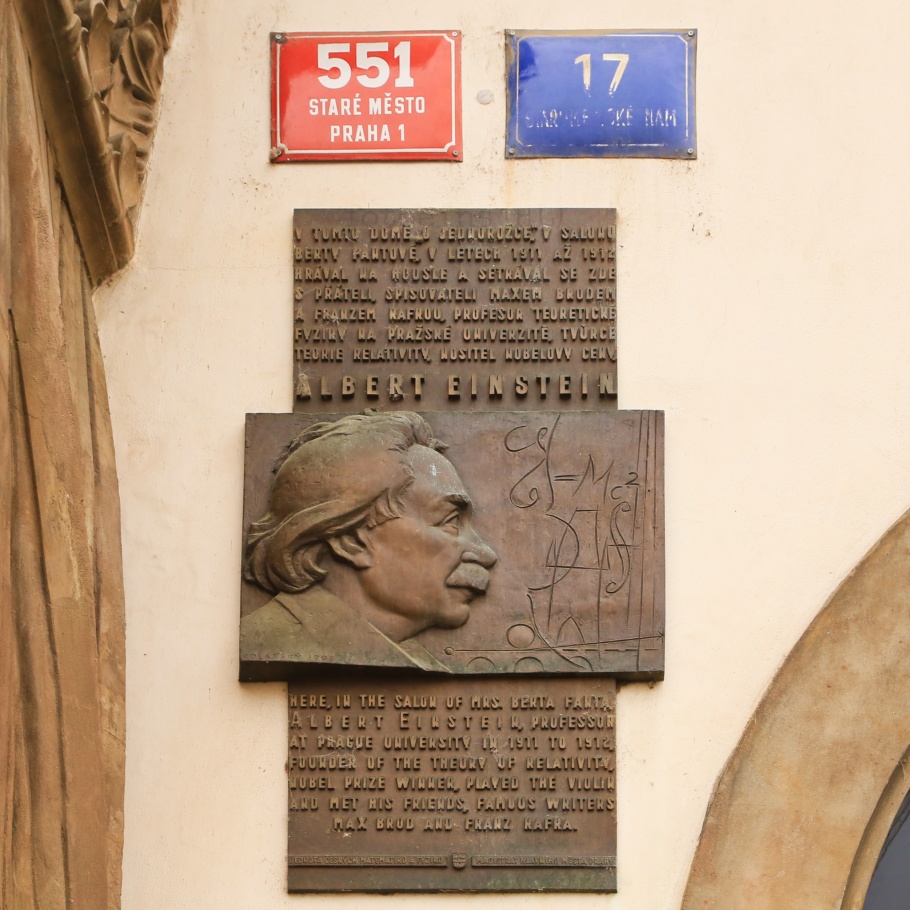 “Here, in the salon of Mrs. Berta Fanta, Albert Einstein, professor at Prague University in 1991 to 1912, founder of the theory of relativity, Nobel Prize winner, played the violin and met his friends, famous writers Max Brod and Franz Kafka.” However, their respective writings reveal little of their meetings.

•   Berta Fanta: eine Vorreiterin der Frauenbewegung (A pioneer of women’s movement): in German from the Prager Zeitung, 17 Jun 2015.
•   Einstein’s time in Prague: Prague Post and short bio, both in English.
•   Max Brod’s documents to Israel’s National Library: in English on DW, 22 May 2019.
•   Statues – Hither and Thither.

# As the inscription on the memorial plaque describes, this building was also called U Jednorožce (At the Unicorn, Zum Einhorn), which is not to be confused with Dům U Bílého jednorožce (At the White Unicorn, Zum Weissen Einhorn) across the way at Staroměstské námesti 603/15. The red and blue street number signs indicate descriptive and orientation numbers, respectively, with a piece of Habsburg history to the numbers’ origins.

Prague’s Old Town Square is within the area of inscription for UNESCO World Heritage Site. I made the photos above on 6 November 2016. This post appears on Fotoeins Fotografie at fotoeins.com as http://wp.me/p1BIdT-9bT.

5 Responses to “My Prague: Brod, Einstein, & Kafka at Fanta Salon”