I had read about this unusual clock years ago; the unusual mathematics connection was an additional “plus”.

I leave the crowds at Gedächtniskirche and Breitscheidplatz and head on over to the SixT car rental outlet on Budapester Strasse. What’s standing in front is most certainly a curiosity, even as passers-by look at me curiously.

The Berlin Clock is known in German as “Berliner Uhr”. The alternate name is “set theory clock” or “Mengenlehreuhr”, a German compound word consisting of “Menge” for quantities (sets), “Lehre” for theory, and “Uhr” for clock. The Guinness Book of Records claimed “the Berlin Clock was the first clock in the world operating according to the principles of set theory1“.

Created by inventor Dieter Binninger, the clock first stood at the corner of Kurfürstendamm and Uhlandstrasse in West Berlin from 1975 to 1995. Local business arrangements were made with Binninger’s widow for a long-term loan including maintenance costs, and the clock was moved in 1996 to its present location at the Europa-Center.

Here is how one reads the Berlin Clock: 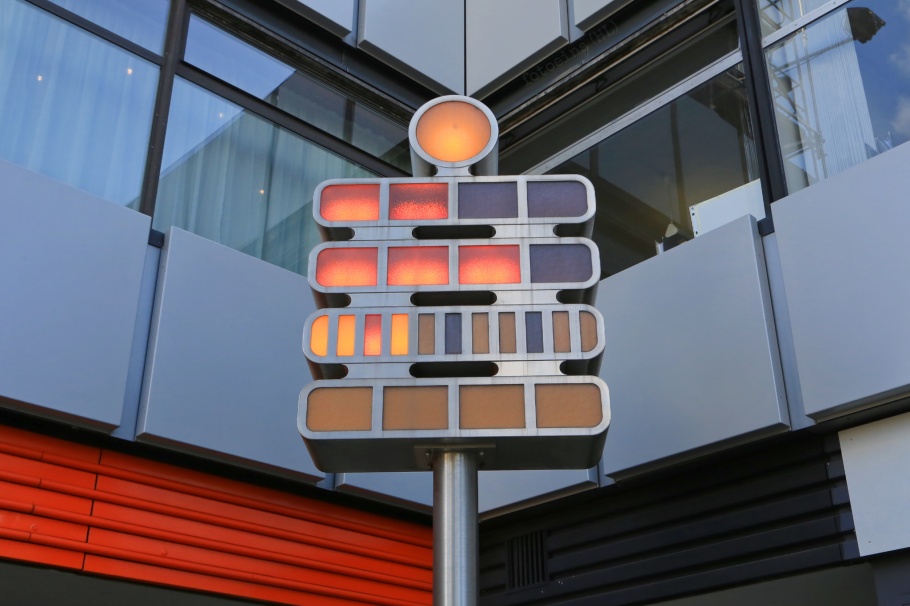 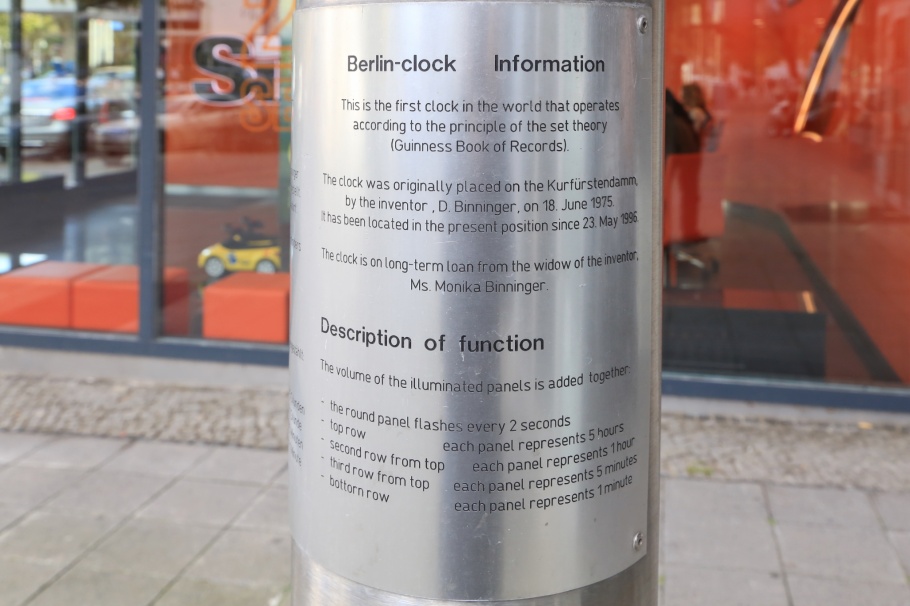 Apparently, the Berlin Clock (or at least the two words “Berlin Clock”) is an important clue to solving at least one of the encrypted messages within Kryptos, Jim Sanborn’s enigmatic sculpture installation at the headquarters of the U.S. Central Intelligence Agency. Some are looking at the Berlin Clock more closely to help unlock the mystery, although Sanborn himself suggests that there are many interesting clocks in Berlin. ( Wired | New York Times )

For a live example of the set theory clock at your present location, click here.

1 Set theory is a branch of mathematics concerned with the properties of groups or sets of objects. The Berlin Clock operates on a modified base-5 system. The latter is related to the base-10 system of numbers in typical usage and is a specific example of the relationship between number systems and set theory.

I made the images and video above on 12 October 2017. This post appears on Fotoeins Fotografie on fotoeins.com as http://wp.me/p1BIdT-akJ.

3 Responses to “My Berlin: An Unusual (Set Theory) Clock”