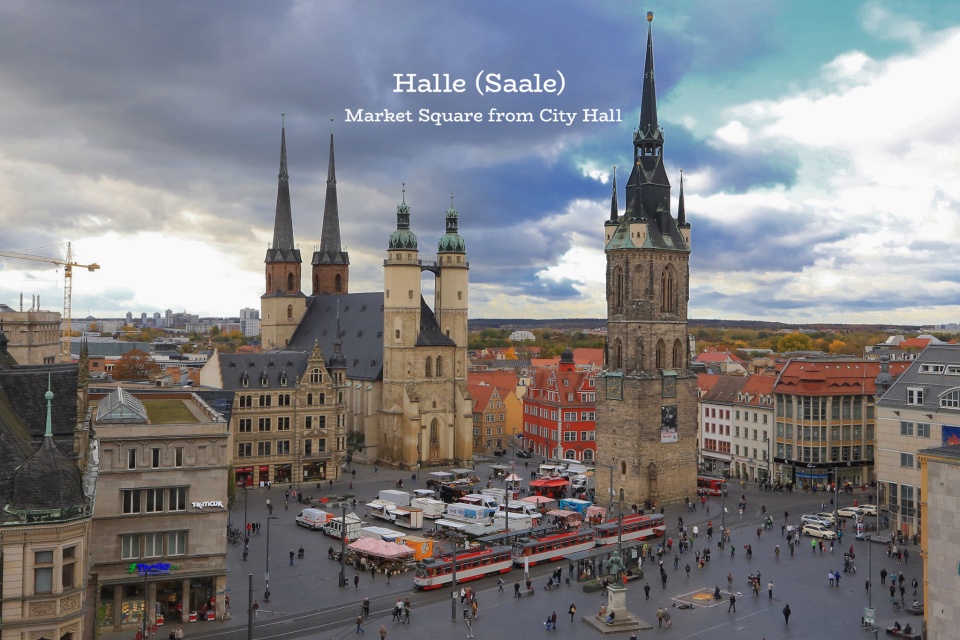 Featured: “5 towers” with 4 (spires) from St. Mary’s Church (left-centre) and 1 from the Red Tower (right-centre). Händel monument is at lower centre.

Located in the present German federal state of Saxony-Anhalt, the city of Halle along the Saale river is one of the larger cities in east-central Germany. Making salt was of great historic and economic importance that the name of the city “Halle” is derived from the old Celtic/Brythonic word hal, meaning “salt”. The name of the river “Saale” is derived from the old German word for “salt”1. With salt bringing wealth to the city through trade, Halle became a trade city or “Handelsstadt.” With the birth and upbringing of composer Händel in the city, Halle also became a cultural city or “Händelstadt.”

Halle’s present-day population at 240-thousand people is neck and neck with the 241-thousand people in the the state capital city of Magdeburg, 75 kilometres to the north. But proximity means Halle is also connected with Leipzig, only 31 kilometres to the southeast in the state of Saxony. Halle and Leipzig are connected with the S-Bahn Mitteldeutschland train service, and the two cities share an airport located about halfway in-between.

The city’s Cathedral or Dom (background) first began as a church for the Dominican monastery founded in 1271. In 1520, Cardinal Albrecht of Magdeburg ordered the renovation and extension of the building into a larger Stiftskirche (monastery or collegiate church). The modified Dom was the only Gothic-style structure in the city and a centre of art and religion in central Germany right up to the Reformation. Between 1531 and 1537, the Neue Residenz (foreground) complex was built in the early-Renaissance style and originally designed to be a Catholic university. The church lost its prominence after Albrecht left Halle in 1541 with the Reformation movement in full swing. With recent renovations, the building today serves as Protestant church to the Evangelisch-reformierte Domgemeinde community. 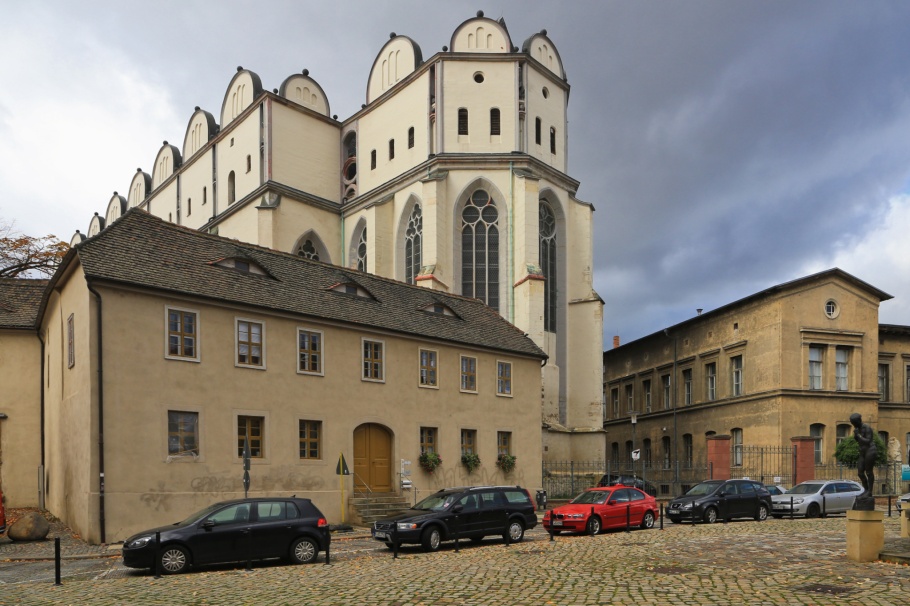 In 1695, August Hermann Francke founded what would become the Francke Foundations as a means to begin in Halle and continue the tradition of social- and education-work with the Reformation- and Protestant-ethic in mind. “Cabinets of curiosities” was a common European hobby in the 17th- and 18th-century as a means of encapsulating the entirety of the world. With his Cabinet of Artifacts and Natural Curiosities, Francke assembled a collection of cultural and natural items gathered from around the world as an instructional tool for students. Growing in size, this collection was further organized and catalogued, and eventually opened to the public as a museum from about 1734. As part of the collection of “Artefacts” (things made by hand), this cabinet shows items from Asia pertaining to the art of writing. 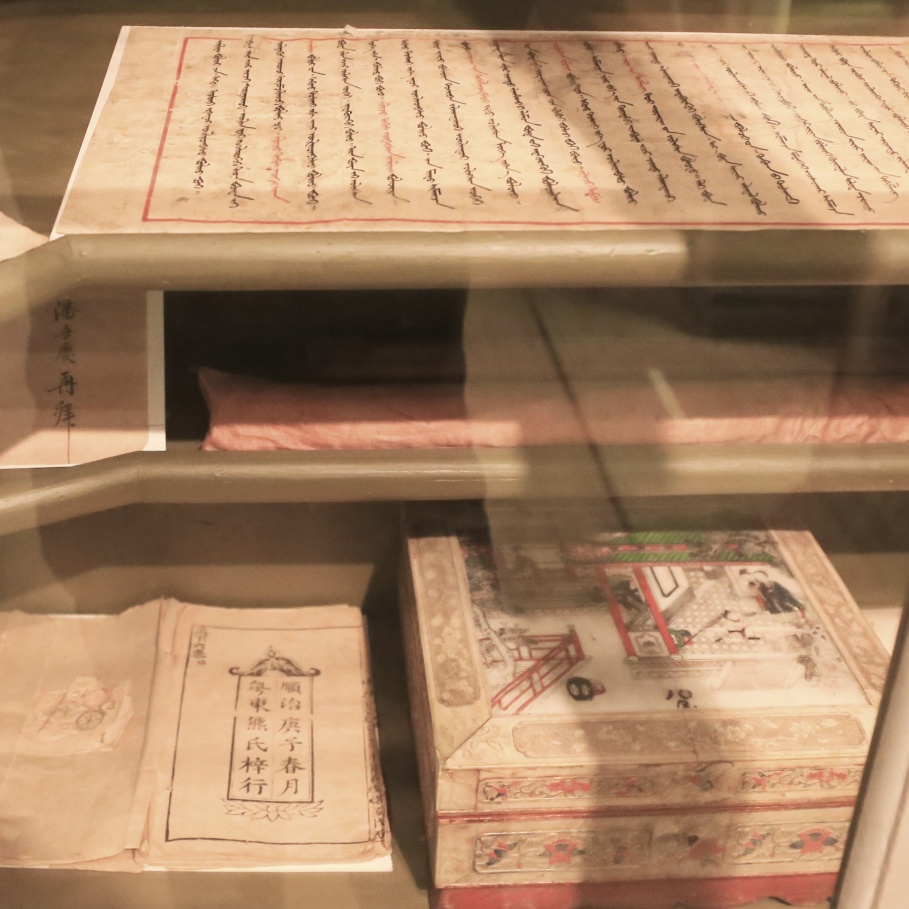 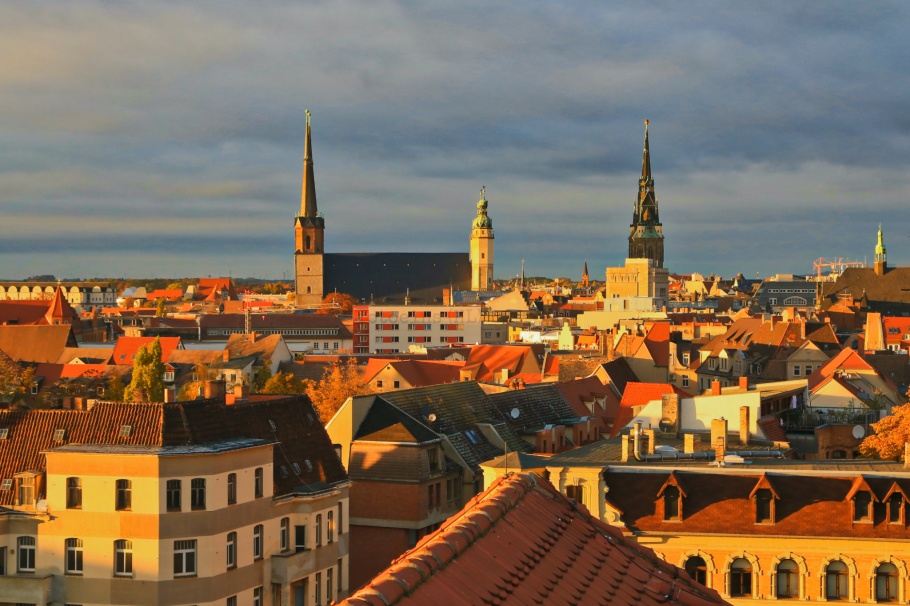 Northwest view in afternoon light from the top of the Francke Foundation, towards Marktkirche Unser Lieben Frauen and Roten Turm – 31 Oct 2016.

In the renovated building where composer Georg Friedrich Händel was born in 1685, the Händel-Haus now houses a museum dedicated to Händel’s early life, before he departed for Hamburg, Italy, and London. The museum also includes a significant collection of antique musical instruments. Shown here is a “cembalo” (Italian for harpsichord) built in 1599 by the renowned Rucker family in Antwerp. Not seen in this view is the inscription on the top panel of the instrument: “Hans Ruckers – me fecit – Antverpiae – Anno 1599”. This is the oldest surviving two-keyboard harpsichord built by the Ruckers, whose reputation was to harpischords as Stradivarius was to violins. When he lived in London, Händel owned a Ruckers harpischord. 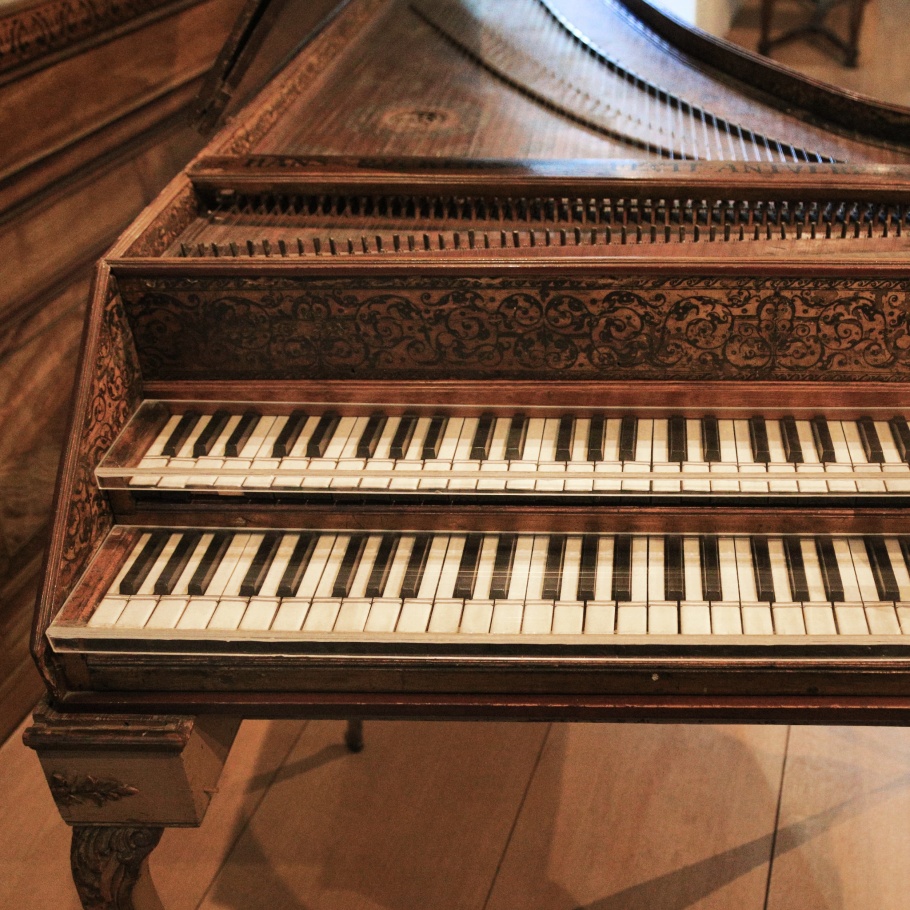 The city’s residents put together and set up a monument to their hometown composer Händel in the market square in 1859. Built by Hermann Heidel, the 3.2-metre high monument shows Händel leaning on a conductor stand on which his famous Messiah oratorio is displayed. 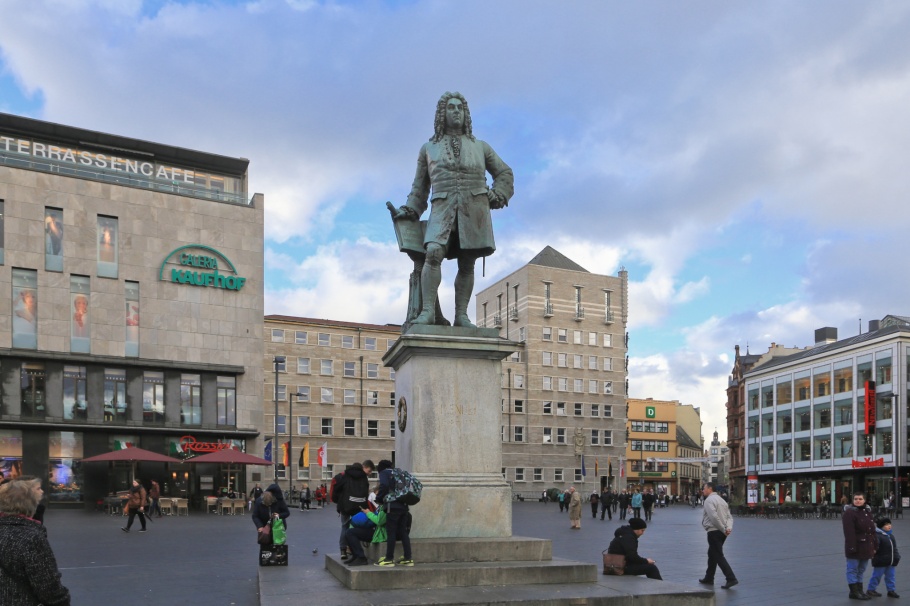 On the west side of St. Mary’s Church is Hallmarkt square which for hundreds of years served as the centre of salt production in the city of Halle. Under the present-day plaza Hallmarkt1 were four springs from which brine was extracted and processed into salt. The city owes its historic wealth and success in large part to the “white gold” and to the “Halloren” who worked the salt mines. In 1999, the sandstone Göbel fountain was installed and inaugurated at Hallmarkt, with figures highlighting various legends and stories from the city’s history including the cheeky appearance of a rapturous and naked Cardinal Albrecht of Magdeburg with his arms around his Italian mistress. 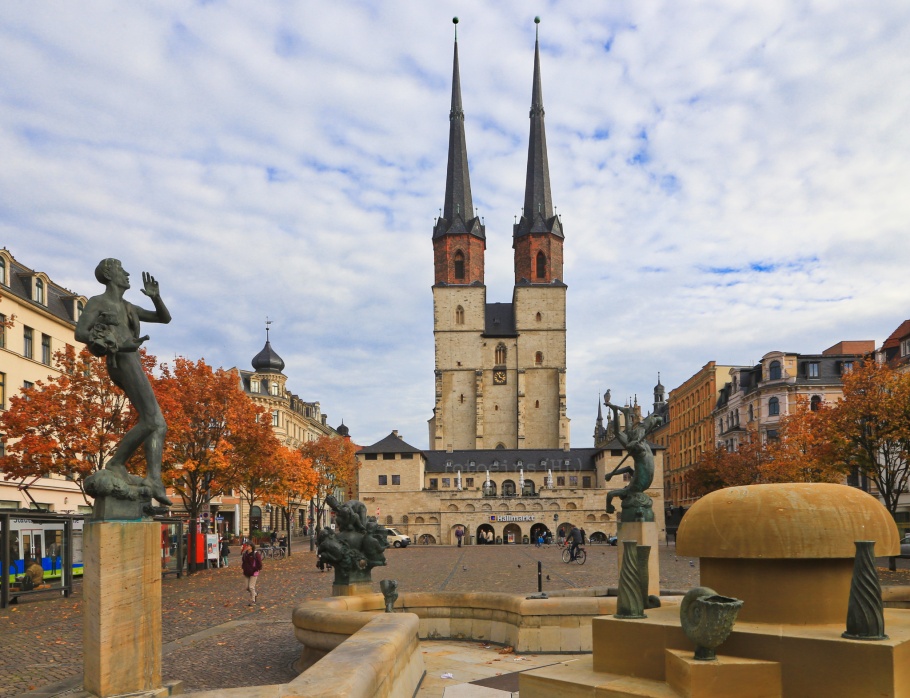 A. Stollberg applies a delicate dark-chocolate drizzle as a final touch on these Halloren Schokoladenkugeln (chocolate balls): they were delicious. If we could, we would’ve stayed here at the counter gleefully sampling chocolate! Since the early 19th-century, the Halloren Schokoladenfabrik AG company has been making chocolate: they now have non-alcoholic and alcoholic varieties; white, milk, and dark varieties, and additional flavours too numerous to describe. 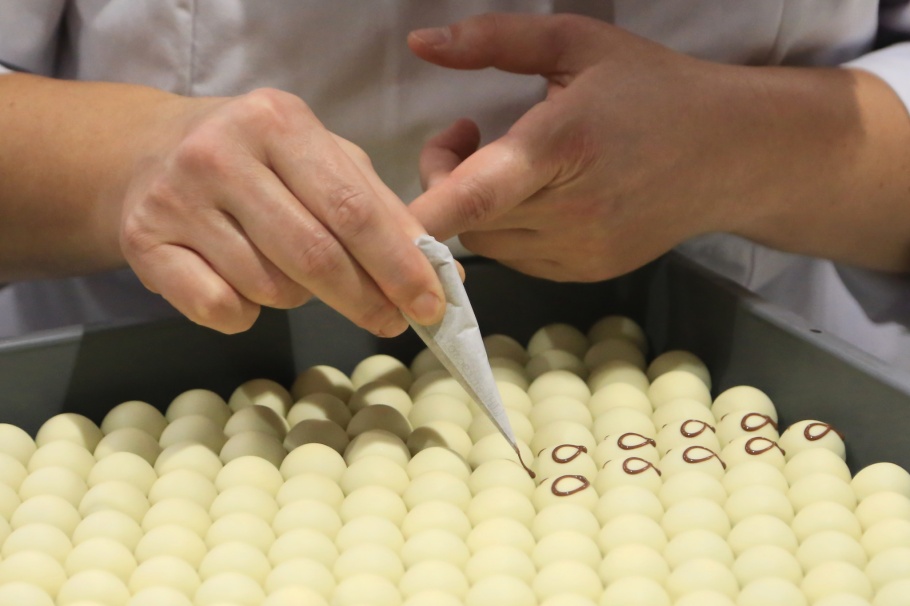 The sun shines on Marktplatz (Market Square) in the Händelstadt. At left are two Gothic towers and two Romanesque towers for the Marktkirche St. Marien (St. Mary’s Market Church, built 1530-1554). Martin Luther’s death mask and hands (apparent molds) are located in the church. At centre is the free-standing Gothic Roter Turm (Red Tower) with working clock and bells, which was built 1418-1506. 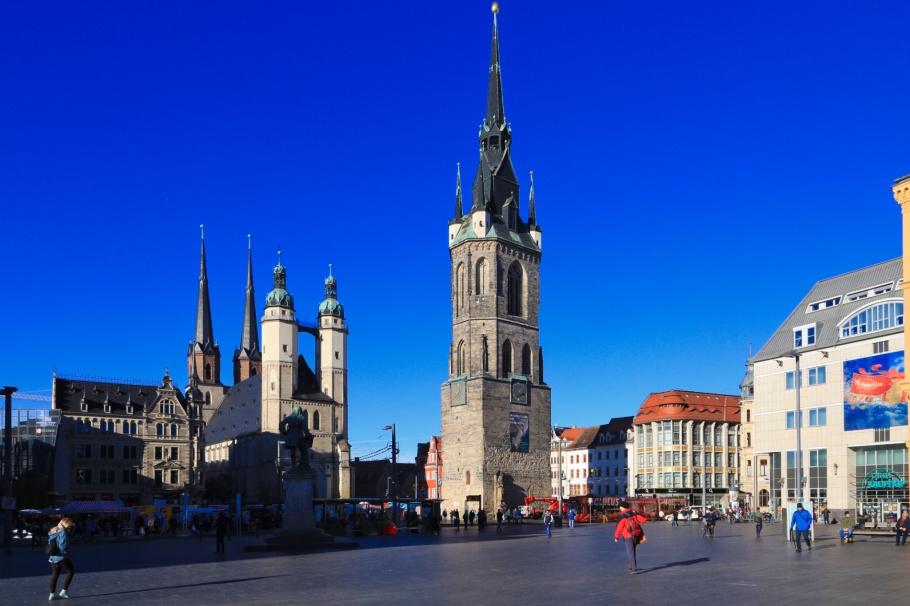 In February 1546, Martin Luther died in Eisleben during a trip to the city of his birth to mediate a dispute among members of a local family. Upon request from Luther friend and former student, Justus Jonas, artist Lukas Furtenagel created a plaster mask of Luther’s face and hands at his deathbed. A funeral procession on foot departed for Wittenberg by way of Halle. In Halle, Luther’s body was kept at the Marktkirche (Market Church, also known as St. Mary’s Church) for the day. Justus Jonas was the first Protestant pastor at the church, and most likely the reason why the Halle church came into possession of the death relics. While the mask and hands have gone through several versions (e.g., mask with closed-, open-eyelids), visitors today can view them both in a small room inside the church. 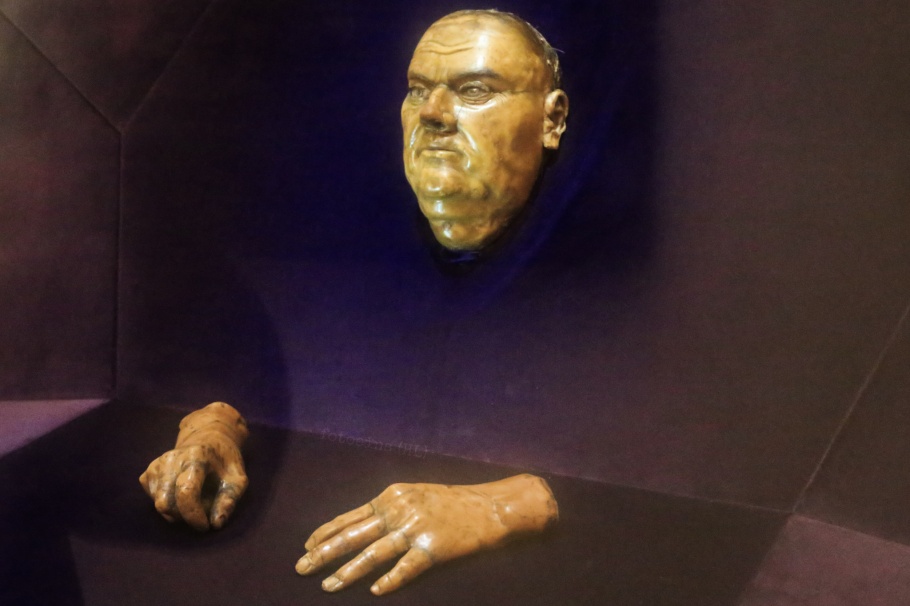 Abraham Ortelius compiled, wrote, and published in 1570 a world atlas and summary of 16th-century cartography in “Theatrum Orbis Terrarum” (Theatre of the World) which remained in demand until the early 17th-century. The excerpt shown is from the 1584 printing of Ortelius’ work; the book is stored in Marienbibliothek (St. Mary’s Library) in Halle. The map shows what was understood of North America at the time; the east coast of Canada and U.S., the northern Gulf of Mexico, and the northern Caribbean are “taking shape.” In 1535 on his second voyage from France into what are now the Gulf of Saint Lawrence and the Saint Lawrence River, Jacques Cartier and his crew sailed up river to Stadacona (Québec City) and Hochelaga (Montréal). It’s interesting how details from Cartier’s voyages were noticed by Ortelius some three decades later. However, as Europe knew North America in the late 16th-century, there’s incompleteness for Newfoundland and the Labrador coast, incomplete mapping of Atlantic Canada, and the absence of the Great Lakes and the Mississippi River. Believed to be the oldest publicly accessible Protestant library in Germany, the Marienbibliothek contains over 30-thousand books mostly between the 15th- and 18th-centuries, including some of Martin Luther’s works. The library was established in 1552 by Sebastian Boetius (1515-1573) when he became the superintendent at St. Mary’s Church. 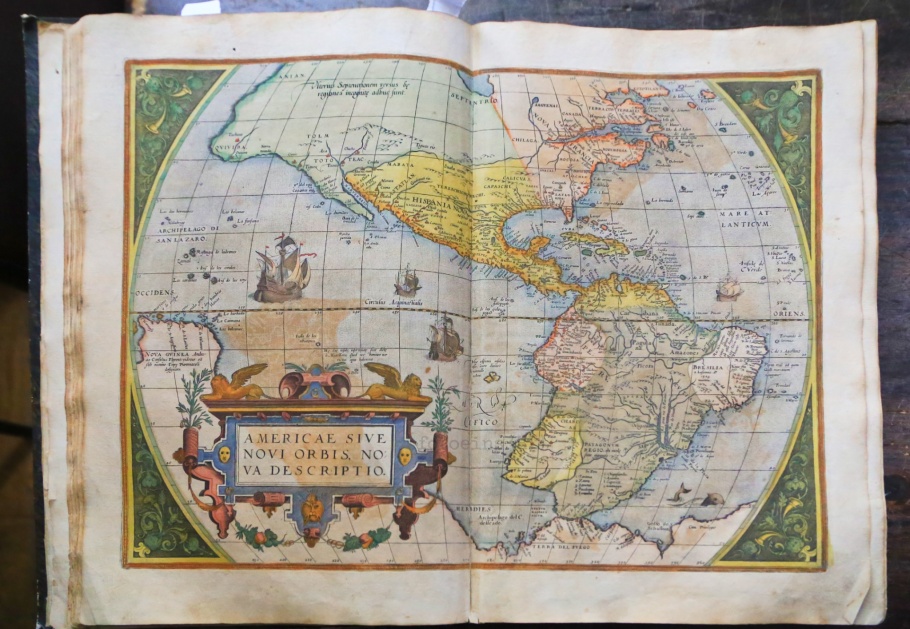 A picture of North America, from “Theatrum Orbis Terrarum,” by Abraham Ortelius (1584). 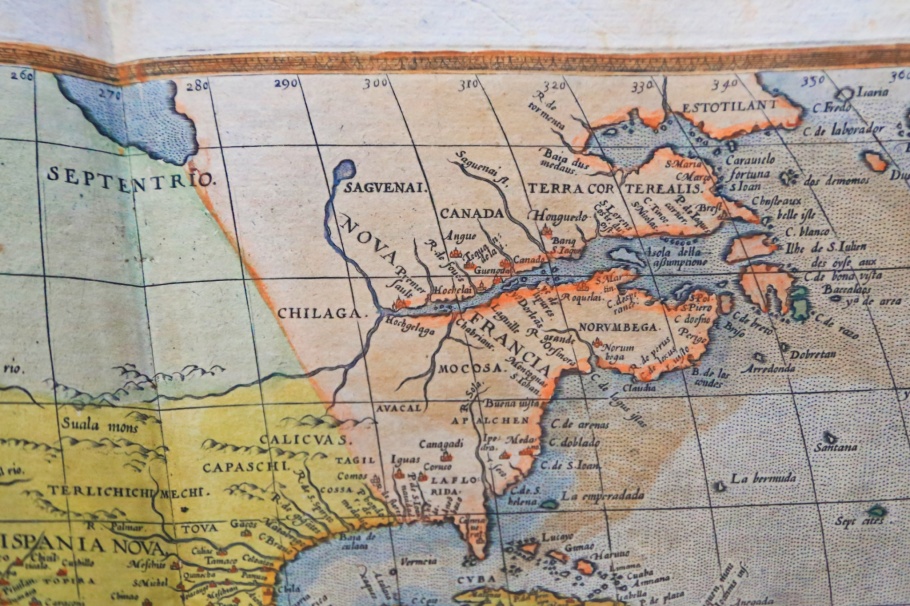 Founded in 1722 and in full operation until 1964, the Saline works produced salt known as the “white gold”, providing the city of Halle its wealth and success. Today, the Technisches Halloren- und Salinemuseum continues to produce salt using traditional boiling and panning methods at a modest haul of 70 tonnes (over 154-thousand pounds) per year. The Salinemusum is the smallest salt producer in Germany and the only museum in Europe to produce organically-certified salt regularly for tourism for visitors to buy and commerce to bakers, butchers, and grocers in Halle. The museum also houses historical exhibitions of the city and the “Halloren” who worked the salt mines. Shown are 3 types of products from the small salineworks: bath salts (Badesalz), and cooking salts coarse- (Mühlensalz) and fine-grain (Feinsalz).

I wrote more about the Saltworks here. 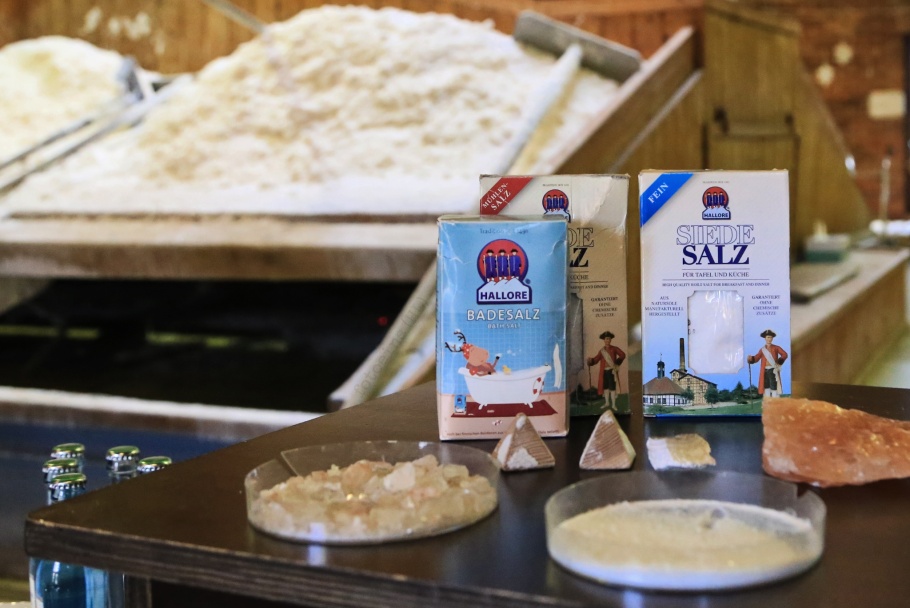 Commissioned by Cardinal Albrecht and designed by Nickel Hoffmann, the Stadtgottesacker cemetery in the German city of Halle was built between 1558 and 1594, and modelled in the Italian Renaissance style after the “Campo Santo” (holy field). This was the city’s only cemetery until 1851. Among those buried here are Christian Thomasius, the founder of Halle’s university, the university’s professors, and August Hermann Francke who founded his learning and teaching foundations in the city. 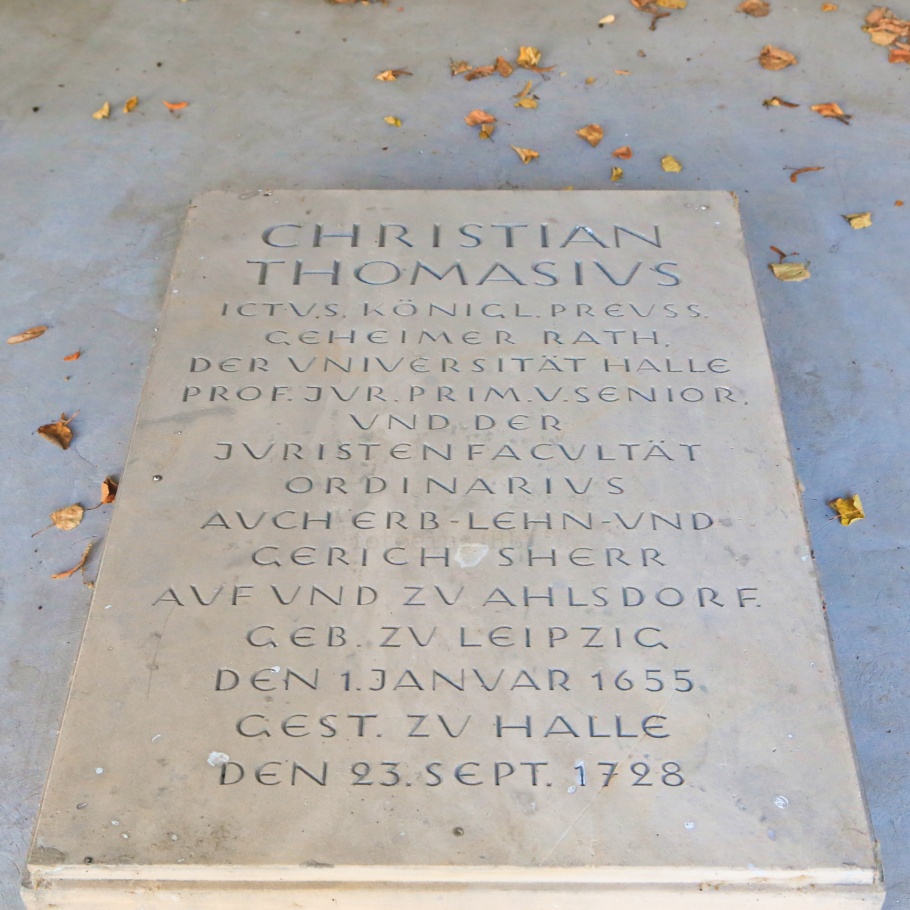 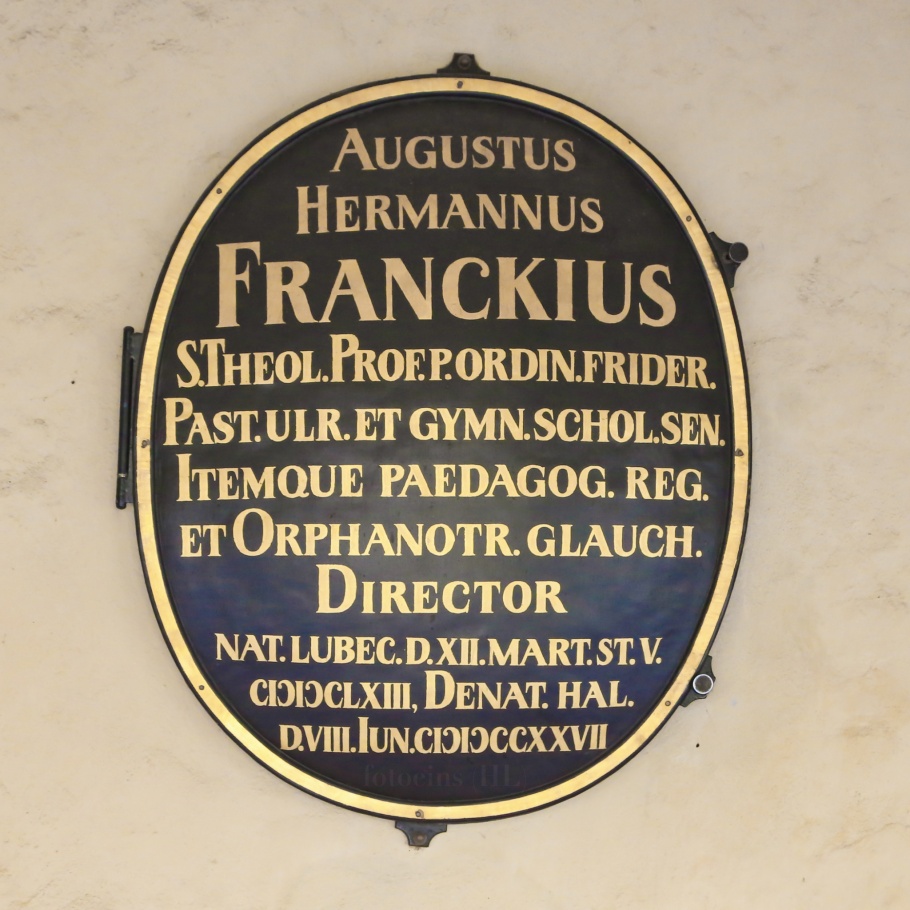 The State Museum for Prehistory in Halle is home of the Nebra sky disk, which is the oldest depiction of the night sky dating to about 1600 BC/BCE. However, the museum’s collection also includes other important archaeological finds including one shown in the picture. Found near Salzmünde in the Saalekreis area around Halle, this shard of ceramic pottery is dated to 5400-5100 BC/BCE. The depiction is of a deer hunt, given similar depictions on other pieces of ceramic in separate finds and the proximity of buried antlers with human remains in some burial sites. I’ve added line segments to emphasize the discovered etches and grooves in the ceramic#. Even when sustenance and survival remained primary concerns, significant events or occasions clearly merited a kind of “cultural momento” for the time. Thanks to J. Kruse and the Museum for access and their permission to photograph, and to Stadtmarketing Halle and IMG Sachsen-Anhalt for their support. 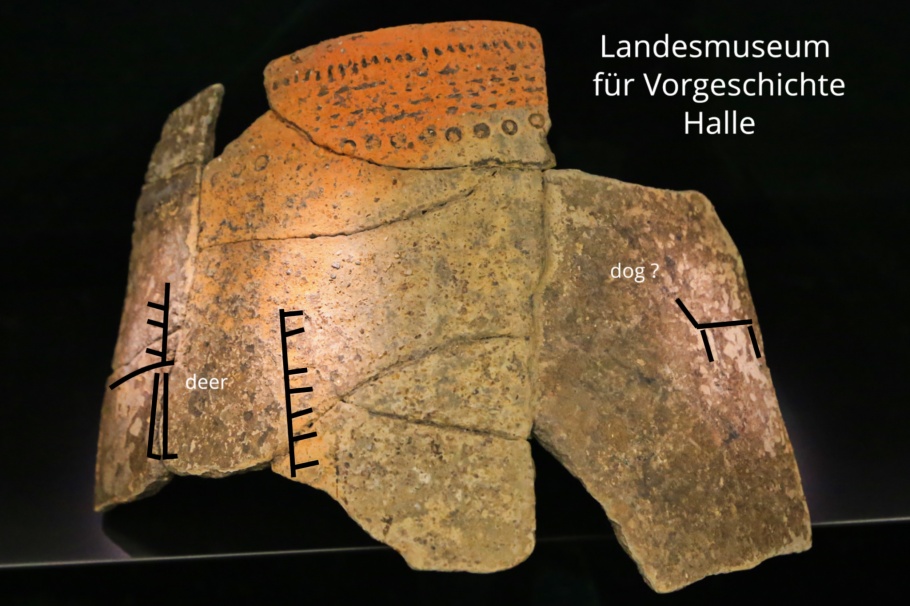 This post about Halle in Saxony-Anhalt is not to be confused with Halle in the state of North Rhine-Westphalia (just west of Bielefeld).

For their time and generosity, thanks to the kind staff at Tourismus and Stadtmarketing Halle, at the Saltworks Museum, at St. Mary’s Library for access and those beautiful books, at the Halloren Chocolate Factory for the guided tour, at the State Museum for access and permission to photograph, at the Händel House for their time, at Dorint Charlottenhof Halle (Saale) for their hospitality, and at IMG- and Sachsen-Anhalt-Tourismus for their support throughout the federal state.

7 Responses to “My Halle (Saale): 12 highlights in the Händelstadt”