Based on what we see in person and online, the quickest version of street art may be defined by the variety of art appearing on side walls of buildings, big and small. Most will think about paint, graffiti, and murals, all of them in the here and now. But we shouldn’t forget any art that’s out on the streets and publicly accessible.

Below are a handful of examples of public art in the city of Vancouver; the following is a visual expression of my fondness for sculpture whose origins sweep back to the 1st-half of the 20th-century.

“A Tale of Two Children”

Renowned artist Ken Lum completed a permanent work commissioned by the City of Vancouver in 2005 for the public works yard. The work “A Tale of Two Children: A Work for Strathcona” is not only a nod to his formative years growing up in Vancouver’s Strathcona neighbourhood, but also provides different views regarding children and their changing and precipitous views regarding self-worth within a society that views them with prejudice. Several of Ken Lum’s works appear throughout metropolitan Vancouver.

Facing north in the outside passage of the Marine Gateway commercial complex, “Salish Gifts” appear at left and “Golden Tree” is in the background. “Salish Gifts” consists of four concrete baskets each with its own bronze lid, installed at Marine Gateway in 2015. The sculpture was created by Musqueam artist Susan Point, telling stories of her Musqueam people and importance of the nearby Fraser River to the Musqueam with key symbols (e.g., birds, fish, grass). Many of Point’s works appear throughout southwest British Columbia and Puget Sound, including “Salmon” (below).

The sculpture with gold finish “Golden Tree” by Douglas Coupland is a copy of the 800-year old “Hollow Tree” in the city’s Stanley Park and installed in 2016 at the Intracorp MC2 development. Coupland hopes the sculpture is a bridge between the history of the original tree with the present-day. Other works by Coupland also appear in the city of Vancouver. 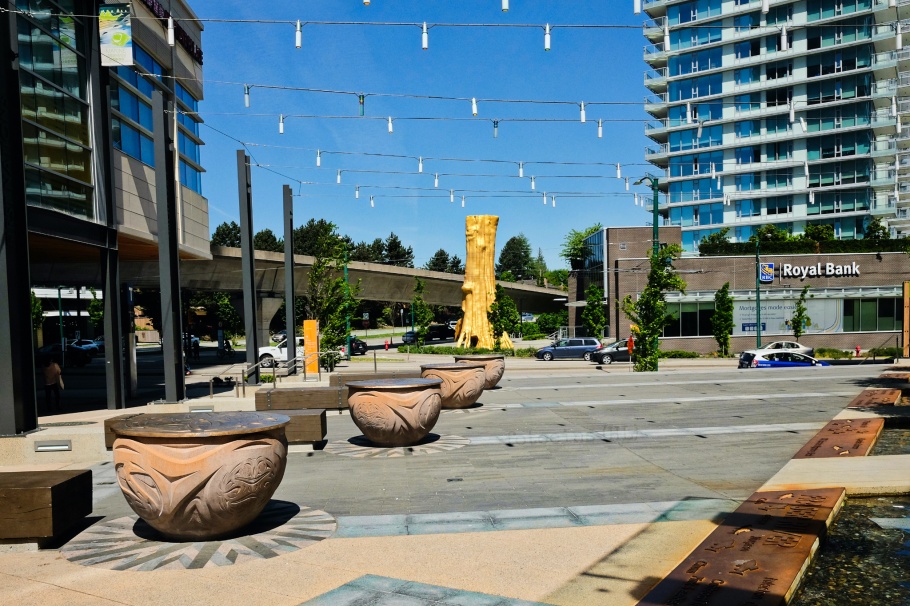 Designed by Charles Marega, two concrete lion statues “guard” the southern gate or portal of the Lions Gate Bridge on the Stanley Park side. The statues were installed in 1939 after the bridge’s opening in late-1938. The Lions also refer to twin peaks on the North Shore Mountains; however, the prevailing indigenous name for the mountains is “Two Sisters”.

On the Point Grey campus of the University of British Columbia stands the Reconciliation Pole, carved by Haida hereditary chief and master carver 7idansuu (Edenshaw), known also by the name James Hart. The 17-metre (55-foot) pole was raised on 1 April 2017. Above the “residential school” are several standing figures holding each other’s hands. Their feet aren’t shown, representing the lack of grounding and abundance of abuse. A blight on the nation’s history, the Canadian government stole an estimated 150-thousand indigenous children from their families, forcing them into residential school-institutions across the country. Countless people, family generations, and intact regional cultures were destroyed, amounting to a systematic state-sanctioned program of cultural genocide. The Reconciliation Pole is a small step in a national process of remembrance, healing, forgiveness, and reconciliation among non-indigenous people, First Peoples, and the federal government. 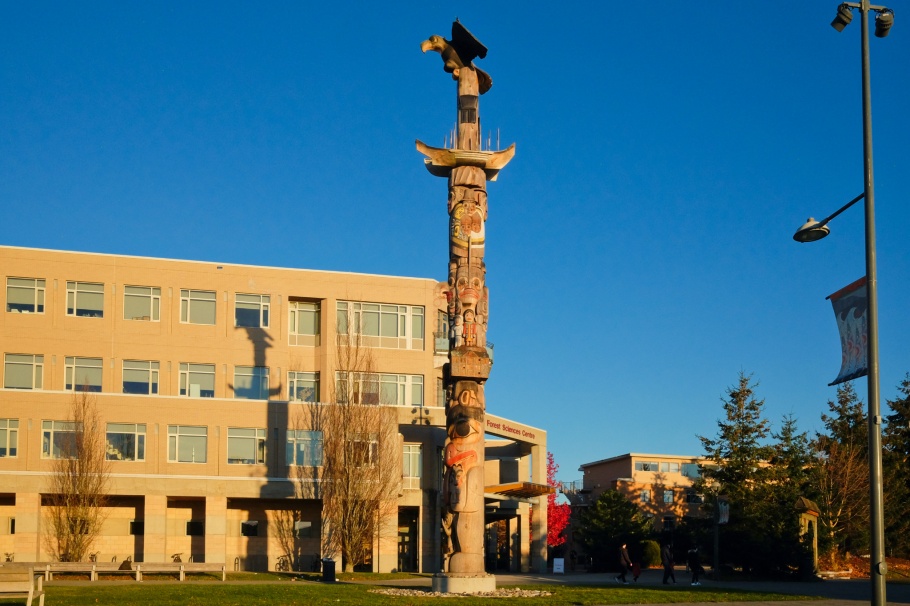 In Vancouver’s Coal Harbour, street maintenance hole covers with “Salmon” designs in bronze were designed by Musqueam artist Susan Point. These beautiful eye-catching covers were installed by the City of Vancouver in 1995. The modern waterfront in Coal Harbour laced with high-density residential towers was once someone’s fishing grounds a mere 150 years ago.

A neon installation is up on the back wall of a building in the middle of Chinatown. Installed in 2020, Chinese-Canadian artist Paul Wong created “Saltwater City – Vancouver / 咸水埠温哥华” to honour the legacy of Chinese-Canadians in the history of Chinatown, in the history of the City of Vancouver, and to the development of the province of British Columbia. The first three Chinese characters (咸水埠) translates directly to “Saltwater City”, the nickname applied to Vancouver by the first Chinese arrivals. The last three Chinese characters (温哥华) is a transliteration of the word “Vancouver”. Echoes of this Chinese phrase are familiar; memories apply to frequent usage by my parents at home and by my parents’ generation out in the streets of Chinatown.

I made all photos above with a Canon EOS6D mark1 (6D1) and a Fujifilm X70 fixed-lens prime (X70) in metro Vancouver BC. Acknowledgements go to Patti for LAPC no.170 in the week of 16—22 Oct 2021. This post appears on Fotoeins Fotografie at fotoeins DOT com as https://wp.me/p1BIdT-lG7.

16 Responses to “Public art in Vancouver”