I have a confession.

Red wines and I have rarely gotten along.

With the exception of the Chilean Carménère, reds generally feel I’ve been pouring scarlet poison down my gullet, burning and tearing the esophageal lining on the way down to my stomach, into a slow boil, scalding and churning with fury.

Dear crimson nectar, you’re all hot and alluring dressed in your tannins, but I cannot have you any more. The subsequent days of post-red churning-gut syndrome are over. I’ve left you for the clean, smooth, sharp, sexy blondes, because frankly, I’m having a lot more fun with the whites. I admit I’ll occasionally stray to the familiar Carménère, but I will always bring white wine back home.

As part of the pre-conference activities for the Germany National Tourism Board, I’m traveling with a group of travel industry trade and press on a three-day tour in eastern Sachsen (Saxony) to explore the culture and traditions, including the long tradition of arts and culture in Dresden, fine porcelain in Meissen, and the Sorbian minority in Lausitz (Lusatia).

Winemaking continues to be an important cultural tradition in eastern Germany with history going back over eight centuries in nearby Meissen. Along rolling hills next to the Elbe river, Saxony prizes its primary vineyard and winery at the Sächsisches Staatsweingut (Saxon State Wine-Growing Estate) where production, marketing, and sales take place at Schloss Wackerbarth.

Located in Radebeul about halfway between Dresden and Meissen, Schloss Wackerbarth (Wackerbarth Castle) began as Count Wackerbarth’s place for peace and quiet by 1729. Several owners came and went, along with the launch in 1836 of the neighbouring Niederlössnitz (later “Bussard”) champagne factory using French techniques. For over a century, the Bussard name remained synonymous with Sekt or sparkling wine, until the company’s termination in 1947. German reunification meant funds and resources for renovation and new construction, and Schloss Wackerbarth eventually bought the Bussard trademark rights. White wine and sparkling wine became production mainstays with both modernized efficient tank-fermentation and classic turn-by-hand bottle-fermentation. With their reopening in 2002, the estate’s strong drive continues towards direct reach to the customer – from vineyard to production to gastronomy to immediate purchase – all on the same grounds.

The Schloss Wackerbarth wine-producing estate is Saxony’s oldest and Germany’s 2nd oldest facility producing sparkling wine. White wine makes up over 80% of their total sales; the most popular white is their Riesling which makes up 25% of total sales. Naturally, their next most popular product is their Sekt. Their most popular red is the Spätburgunder (late Burgundy) accounting for 2% of total sales. For now, the Saxon State Wine Estate isn’t worried about sales in other countries; they’re sustaining good customer base and healthy bottom-line with intra- and interstate sales in Germany. 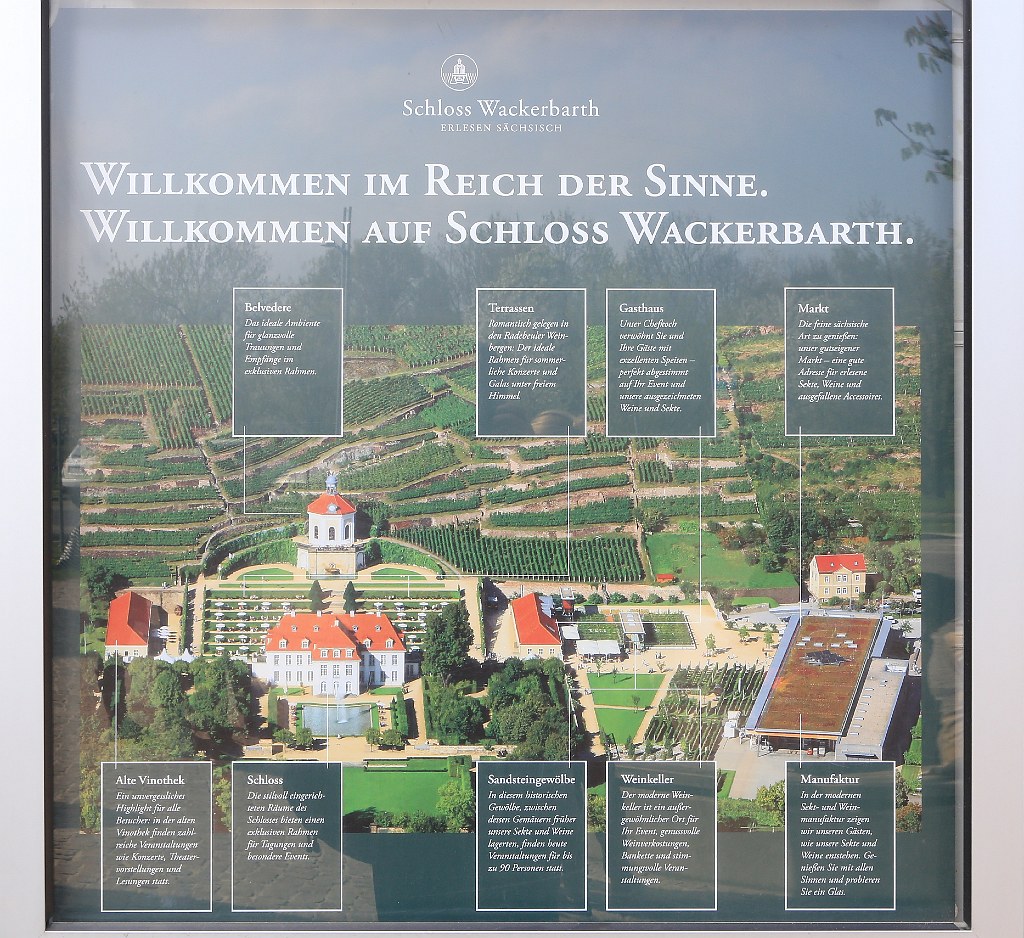 Willkommen im Reich der Sinne. | Welcome to the realm of the senses … 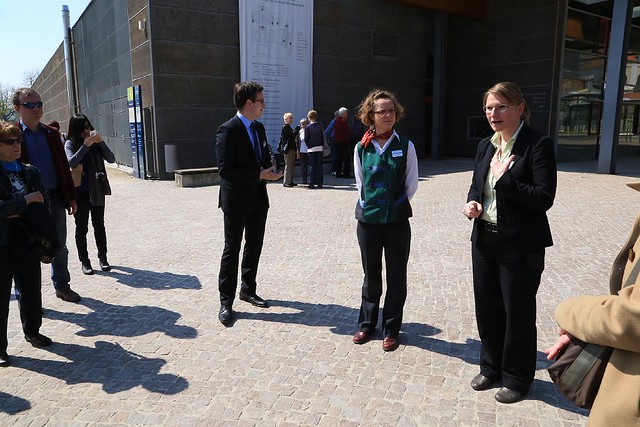 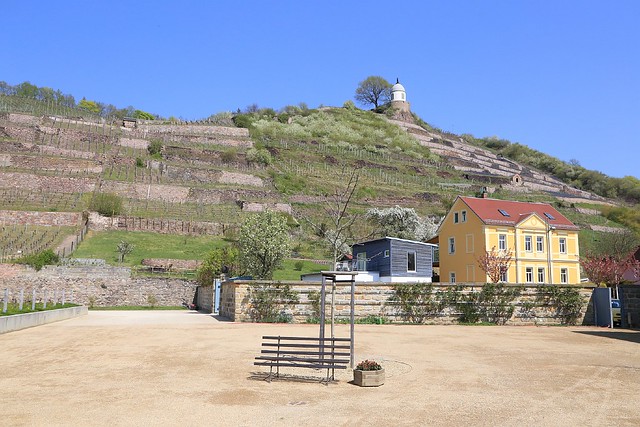 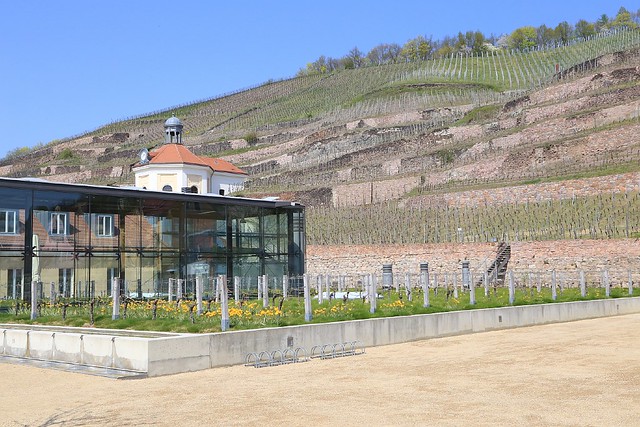 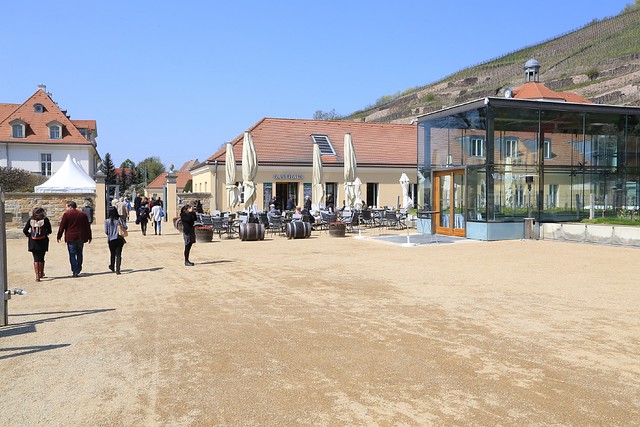 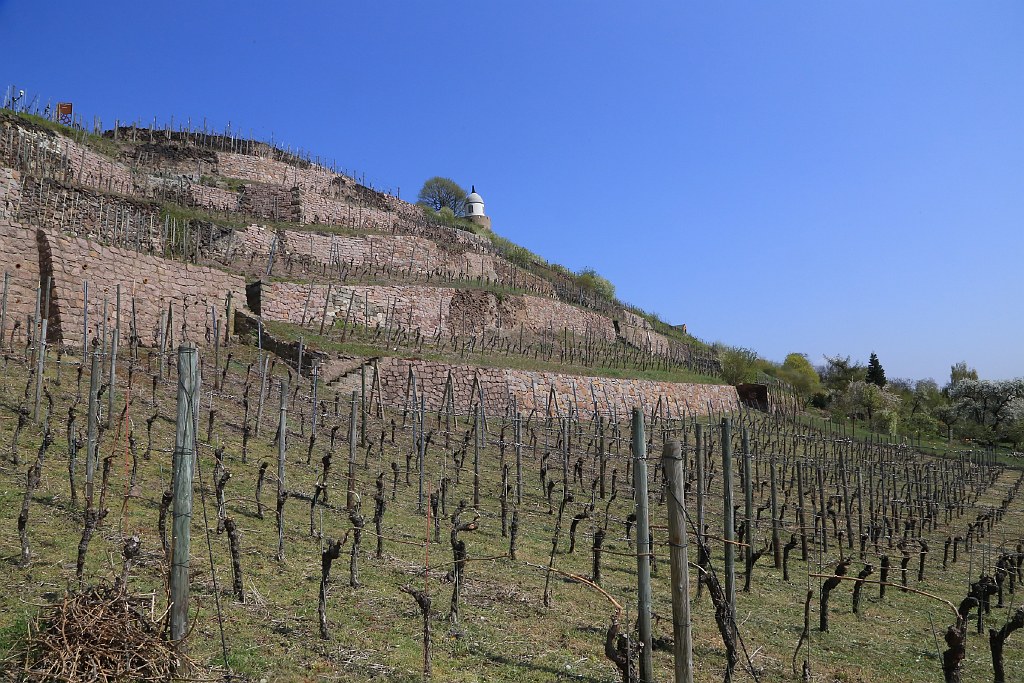 A little early, but still pretty 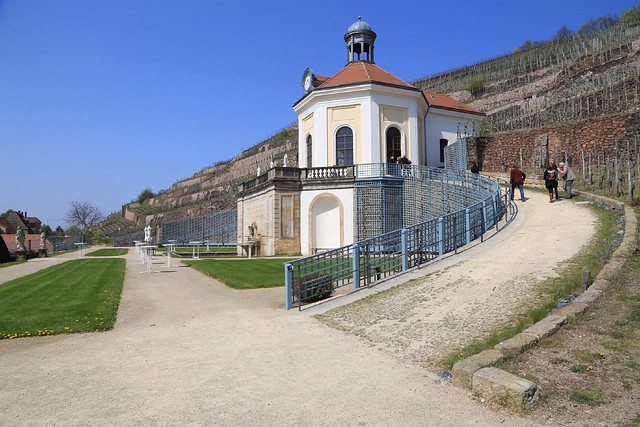 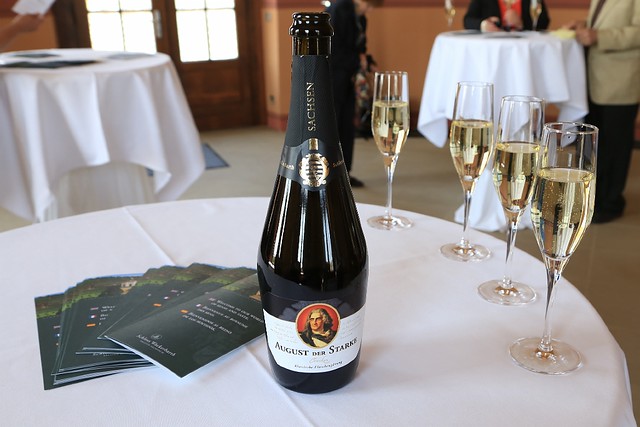 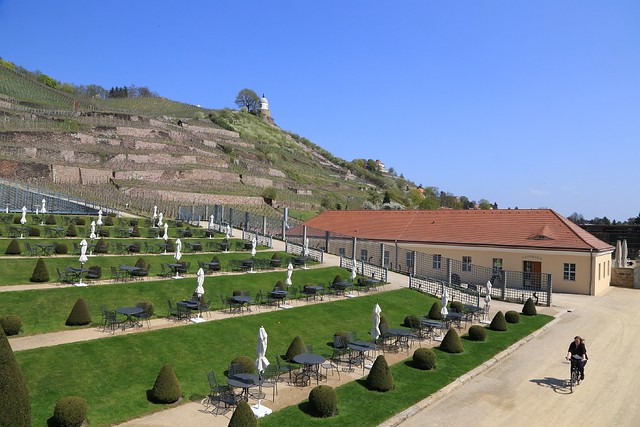 Biking past the terrace 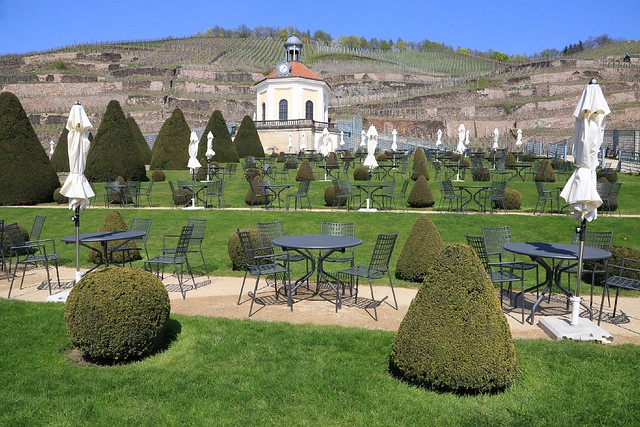 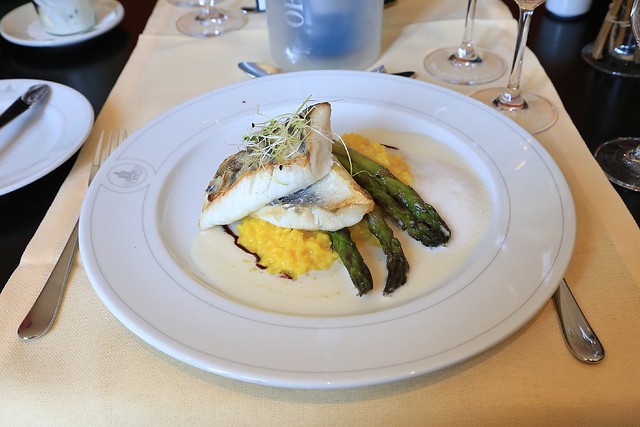 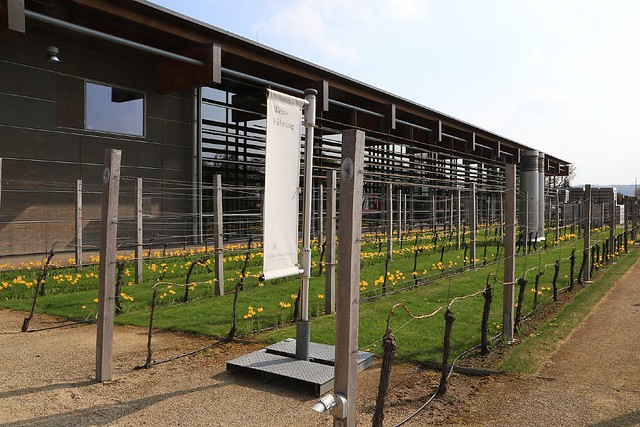 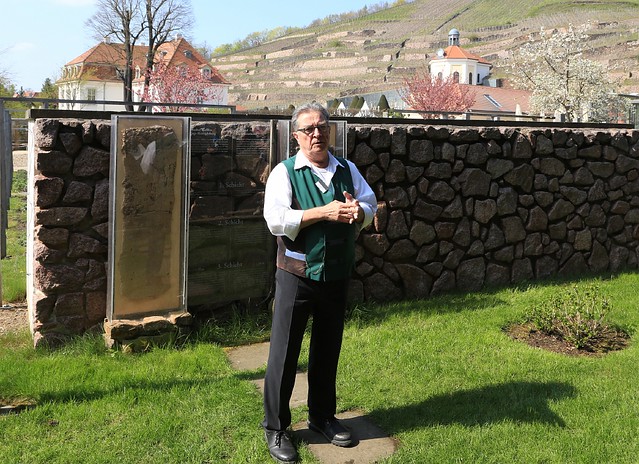 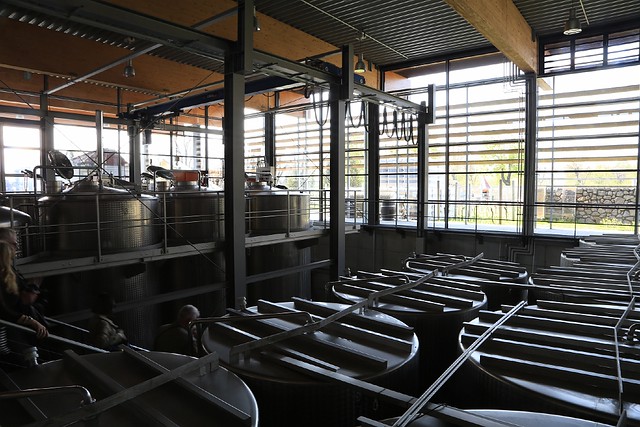 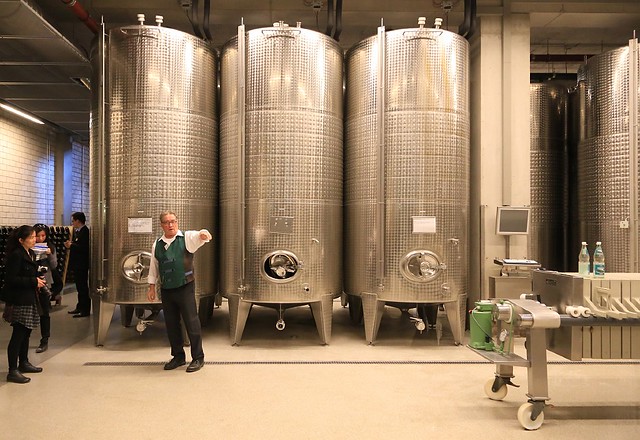 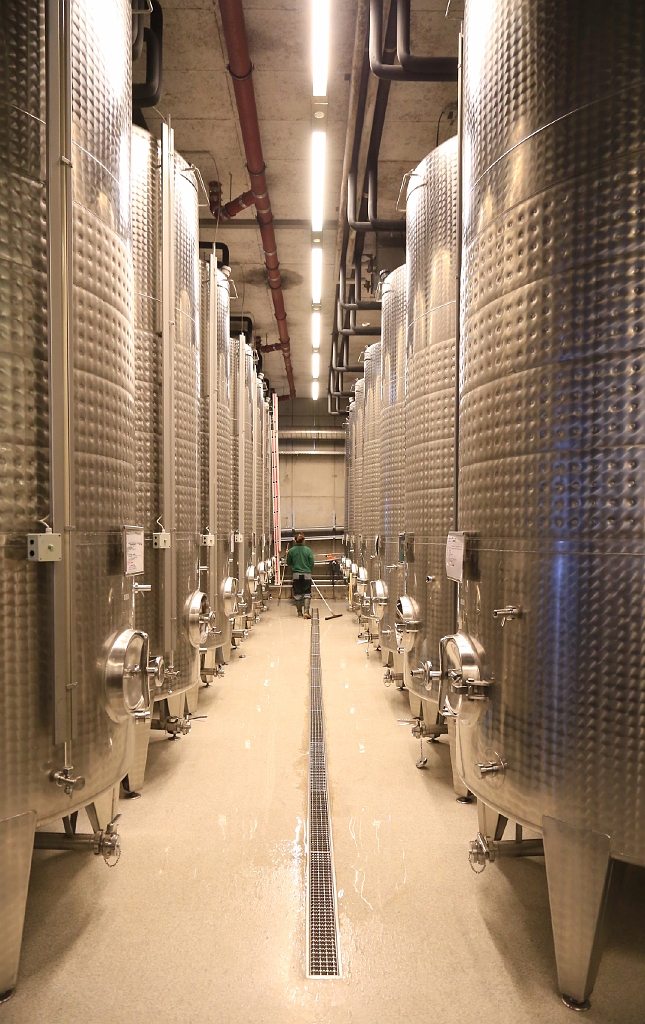 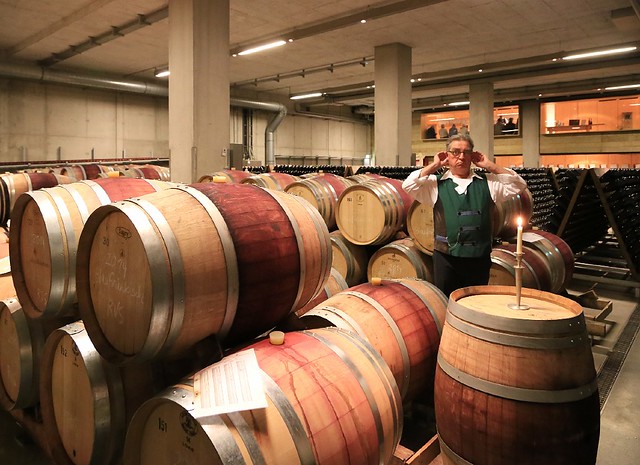 From barrels to bottles 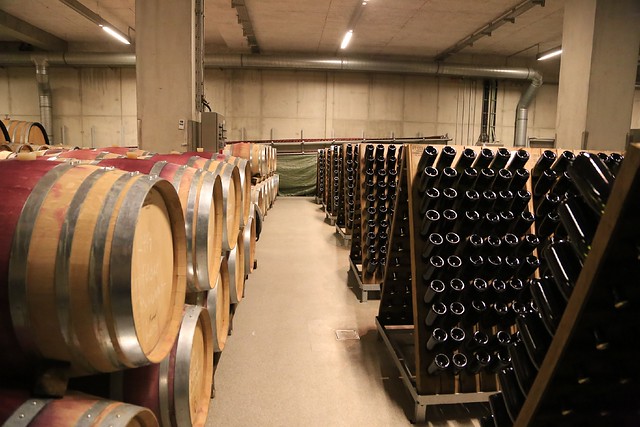 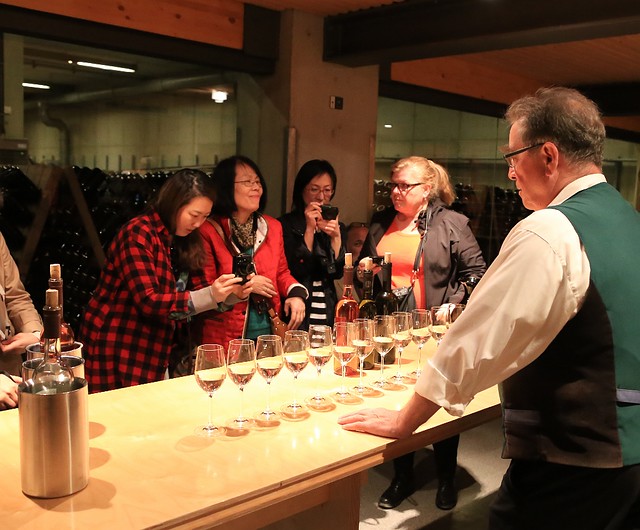 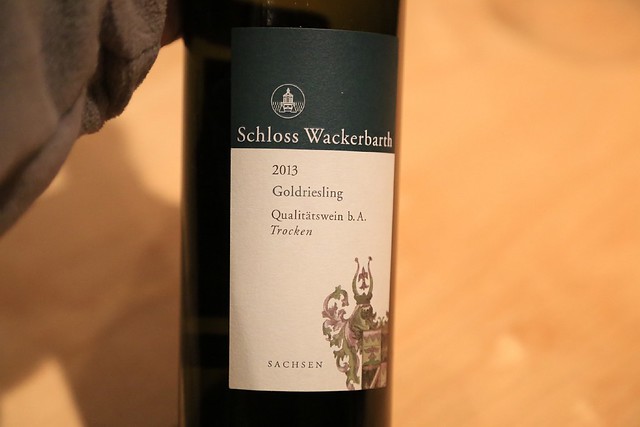 With S-Bahn service from Dresden city (central train station), the S1 train to Meissen is about 30 minutes to train stop ‘Radebeul-Zitzschweig’. From the latter, it’s about 1.6 km (1 mi) east to the winery, which is a short 15- to 20-minute walk; alternatively, you can take tram 4 “backtracking” towards Dresden for a very short ride to tram stop ‘Schloss Wackerbarth.’ (Google map for more details). Schloss Wackerbarth is also part of Deutsche Bahn’s “mittenrein reisen” train-and-visit program in Saxony (information in German).

•   Celebrating Saxony’s culture: beer and the Sorbian minority
•   The bright side of Dresden
•   About GTM15

I’m grateful to Germany Tourism, Tourismus Marketing Gesellschaft Sachsen mbH, Tourismusverband Sächsisches Elbland, and Schloss Wackerbarth for supporting and providing activities to the Sächsisches Staatsweingut. I made all photos above on 23 April 2015. This post is on Fotoeins Fotopress at fotoeins.com as http://wp.me/p1BIdT-6R7.