Coming to a close is my time in Berlin, as well as my year on the road. It’s (northern) winter solstice, and I’ve decided to make a quick day trip south to Dresden. Because of limited daylight compounded by overcast skies, it’s no surprise my time here is too short, and I make a note to come back (which I make good 3 years later). Meanwhile, with fading light on Königsufer on the bank of the Elbe river, I get a brilliant view of Dresden’s Old Town, highlighted at centre by the Sächsisches Ständehaus, Residenzschloss (palace), and Kathedrale Sanctissimae Trinitatis (cathedral); Augustusbrücke bridge is at right.

END_OF_DOCUMENT_TOKEN_TO_BE_REPLACED

The Leipzig Spinnerei is a former cotton mill (Baumwollspinnerei) in the western industrial suburb of Plagwitz. The massive site at an area of 10 hectares (over 1 million square feet) with rows of factory buildings began operation in 1884 and eventually became the largest cotton mill in Europe with thousands working and living on-site. After the site ceased to produce spools of cotton thread shortly after reunification, artists took advantage of the cheap empty space, and transformed the area into studios, galleries, and exhibition halls. Much has been written about the impact and examples of art and space on Leipzig as the “new Berlin” as well as the “New Leipzig School.” The site as art and culture space opened its doors in 2005.

END_OF_DOCUMENT_TOKEN_TO_BE_REPLACED

When I lived in Germany, I remembered the ads for Radeberger Pilsner, and I wondered about some of the venues shown. I realized the buildings were in the famous city of Dresden on the Elbe river in southeast Germany, and the city of Radeberg was only 15 kilometres from Dresden. Images of the Dresden’s landmarks have been an important part of Radeberger brewery’s advertising campaign to show the beer’s exceptional quality and to associate that very same quality by (physical) proximity with the symbolism of Dresden’s historic landmarks.

As one of the city’s most well-known landmarks, the Semperoper (Semper Opera House) appears in countless images representing Dresden. The Semperoper is the showpiece structure at Theaterplatz (Theater Square) looking over the river Elbe in the city’s Altstadt (Old Town). The first version of the building opened in 1841 with the design provided by Gottfried Semper. After destruction by fire in 1869, the second version of the building, also to Semper’s design, was completed in 1878. Only the Semperoper’s outer facade remained in 1945 during the final stages of the Second World War. Built once again to Semper’s original designs, the third and present version of the Semperoper opened to great acclaim on 13 February 1985. The interiors were reconstructed according to original plans and designs, whereas stage machinery and technical and engineering requirements are all updated to the best standards in audio quality.

With the leading title “Sächsische Staatstheater-Staatsoper und Staatsschauspiel Dresden”, the opera house is home to the Saxon State Opera, the Saxon State Theatre, the Semperoper Ballet, and one of the world’s oldest orchestras, the Staatskapelle Dresden, founded by Prince Elector Moritz von Sachsen in 1548.

The Semper Oper is a natural part of any walking tour of Dresden, as Theaterplatz is minutes from the Zwinger, Residenzschloss, and the Frauenkirche. I’m awed by the night tour, a chance to see up close the building’s Baroque style exterior and the classic ornate interior. Everybody speaks in calm hushed voices, the unspoken agreement to be mindful and respectful of this venue. Despite the presence of other people in other tour groups, it feels like I have the Opera House to myself at 11pm.

Classic shot of the front by day

Classic shot of the front at night; also featured on the “night watch”

Some columns real marble (cool to touch); some faux-marble plaster (warm to touch). Full replacements were too expensive for the GDR/DDR at the time

S. Kurpiers, one of the stage managers and our guide for the evening

Separate guided tour to our left; there are 4 balconies

Another tour to the right

Looking up; lip of the 2nd balcony appears at top

Thanks to Semperoper for opening their facility to the public at night, and thanks to S. Kurpiers who kindly guided our tour of the venue. Thanks also to Germany Tourism, Saxony Tourism, and Dresden Tourism for their support and hospitality. I made all of the photos above on 22 April 2015 with the Canon EOS6D. This post appears on Fotoeins Fotopress at fotoeins.com as http://wp.me/p1BIdT-7sx.

The following is an advertisement for Radeberger brewery from 2014. The advert for their Pilsener ends with an image of Dresden’s Semper Oper at night and the slogan “schon immer besonders” (always special).

For me and my fellow travel media colleagues, the tall glass is a welcome sight. I never liked Radeberger sold in North America, but here in the original brewery in the city of Radeberg, that freshly drawn Pils tastes like sweet nectar.

END_OF_DOCUMENT_TOKEN_TO_BE_REPLACED

You’re visiting Dresden, either on a day-trip from Berlin or Leipzig, or you’re staying in Dresden for a couple of nights. By day, you’ll see, for example, the Semper Oper and the Zwinger, and you’ll walk through the Neustadt. At night after dinner, you might catch the golden glow cast by lights on the architecture.

But by late-November in the Saxon state capital city, you will likely encounter at least one of the following Christmas markets in the city:

END_OF_DOCUMENT_TOKEN_TO_BE_REPLACED

After tracing the likes of The Peaceful Revolution, Martin Luther, Bach, and Mendelssohn in Leipzig, the sparkle of bright lights and the promise of mulled wine beckon. Emerging from the Markt S-Bahn train station, the sounds of the underground give way to the din of crowds. The city’s central Marktplatz (Market Square) is home to the Leipziger Weihnachtsmarkt (Leipzig Christmas Market) and people are out en masse despite the cold bite in the evening air.

END_OF_DOCUMENT_TOKEN_TO_BE_REPLACED

Inspired by a similar photograph in a hotel room, I’m at Willy-Brandt-Platz at the bus- and tram-stop in front of the Westhalle at Leipzig Hauptbahnhof (Central Station). I’m deliberate in experimenting with photographs made over a variation in settings. What I like is the tram moving into the frame from the left, the light stripes parallel to the lines of the building in the background, and leading to the waiting crowds at the right. And the Christmas consumer streak continues …

Thanks to Leipzig Tourismus und Marketing GmbH (LTM) and InterCityHotel Leipzig for their kind hospitality. Access to public transport was kindly provided by LTM and the MDV Mitteldeutscher Verkehrsverbund regional transport authority. I made the photo above on 2 December 2014 with the Canon 6D, EF 24-105 zoom-lens, and the following settings: 1/4s, f/4, ISO640, 28mm focal length. This post appears on Fotoeins Fotopress at fotoeins.com as http://wp.me/p1BIdT-6jv.

In a present-age of speed, screens, and instant gratification, there are reasons to hold onto something tangible in your hands, something as simple as a cup, a plate, a bowl; all high-quality products made in the slow time-honoured way developed over centuries as an important local and, now national, cultural tradition.

First time porcelain production began in China going back at least 1000 years BCE with the subsequent centuries yielding hard durable highly-valued products in white, blue-and-white, and green. With European naval powers reaching Asia in the 16th and 17th-centuries, porcelain found new customers and high demand as “white gold” on par with gold and silver. Admiration and envy got many in Europe to thinking: all we need are some chalky deposits, some water, and some big hot ovens, and we’ll be rich … apart from chemistry, the correct firing or curing temperatures, experimentation, and skill. Until the early 18th-century all porcelain came from China, which is how the present-day phrase “(fine) china” arises.

The European debut to porcelain-making began in 1710 in Albrechtsburg castle in Meissen. When the big guy (who pays your wages or is holding you prisoner) says: “go ye therefore and make me some ‘gold'”, one tends to heed those orders. Frequently in need of funds, Augustus the Strong imprisoned and ordered the alchemist Johann Friedrich Böttger to produce “gold”, but with mathematician and physicist Ehrenfried Walther von Tschirnhaus’ guidance, the two gentlemen did the next best thing and produced Europe’s first “white gold.” Porcelain manufacturing moved from the castle to the present location outside of Meissen’s old town in 1863.

We enter the Meissen Couture and its porcelain museum for a look behind the scenes. Why worry about modern techniques like 3-d printing when you’ve got motivated people willing to put in the hours; their hearts, minds, and souls into their craft? The basic creative instinct and personal touch live on in the town of Meissen in Germany’s Saxony.

END_OF_DOCUMENT_TOKEN_TO_BE_REPLACED

I’m out and about, at 8 on a Wednesday morning in late-April.

In the midst of the (in)action.
A creaky door opens and closes.
Clanging sounds of pots and pans.
From around the corner, a dog barks.
A word from a woman to her young daughter, on their way to school.
A delivery van slowly makes its way down the narrow cobbled-stone streets.

And a morning passes, in the middle of Neustadt in the German city of Dresden. 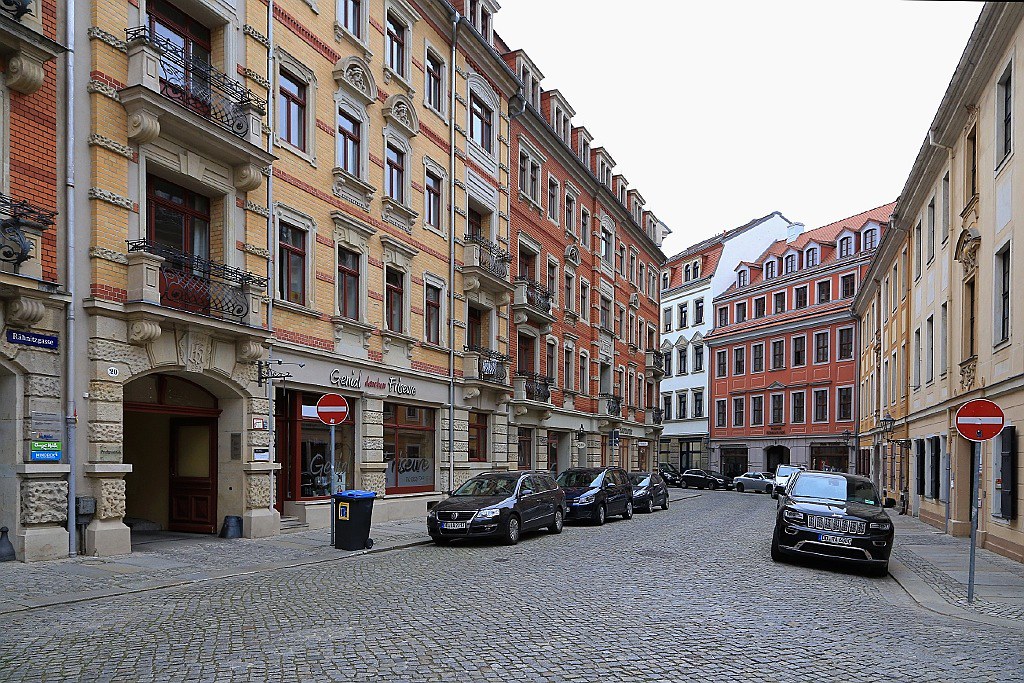 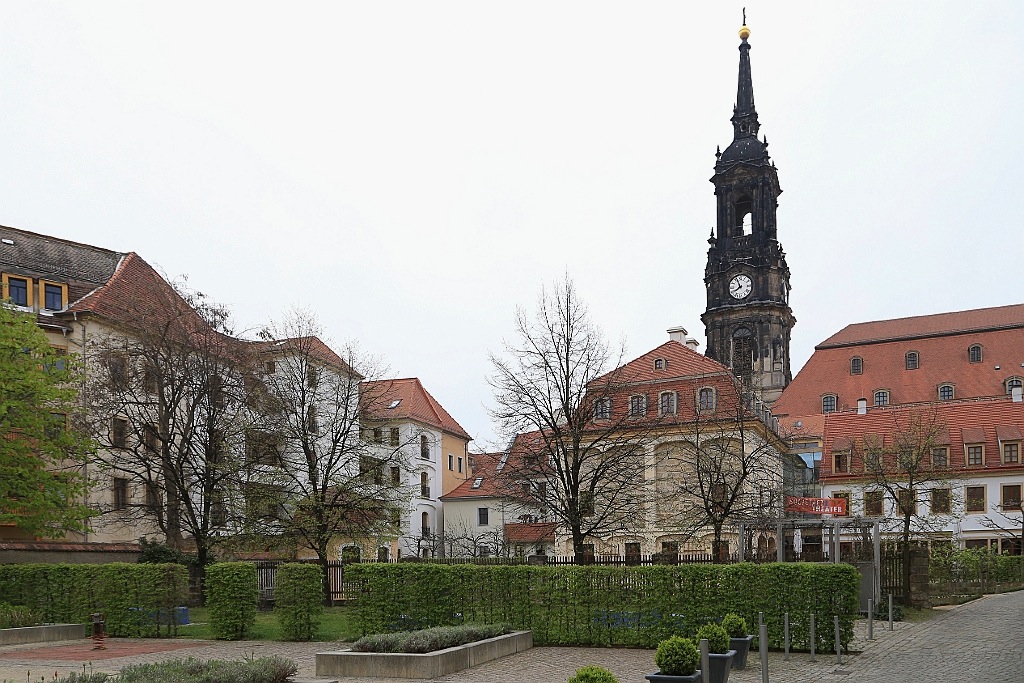 I made this photo above on 22 April 2015 with the Canon 6D and the EF 24-105 L IS zoom-lens. I’m grateful to Germany Tourism and Dresden Marketing for supporting activities in the area. This post appears on Fotoeins Fotopress at fotoeins.com as http://wp.me/p1BIdT-6Qc.