With its founding date as “Augusta Vindelicorum” by the Roman Empire in 15 BC/BCE, Augsburg is one of the oldest cities in Germany, and has ties with Martin Luther and the Reformation which marks its 500th anniversary in 2017.

Months after making his 95 Theses known to church authorities and the public, Martin Luther was called to the free imperial city of Augsburg in 1518 by Cardinal and papal legate and representative Cajetan to answer charges of heresy, for challenging the morality of indulgences, and for questioning the supreme authority of the Pope. Cajetan urged Luther to recant or revoke his statements (“revoca!”), but Luther held firm and refused to obey Cajetan.

The following identify locations in Augsburg where Luther made his stand against Cajetan and the Catholic Church and where an important document describing key principles of the Reformation were unveiled and read in official capacity.

Here in October 1518 Luther refused to deny his Theses as demanded by Cajetan. The town palace, financed and constructed by the wealthy Fugger merchant-family, began in 1512 and completed in 1515.

Carmelite monks built this church in 1321 AD/CE. In 1518 between the 7th and 20th of October, Luther stayed in the Carmelite monastery at St. Anna’s church over the course of his meetings with papal legate Cajetan. 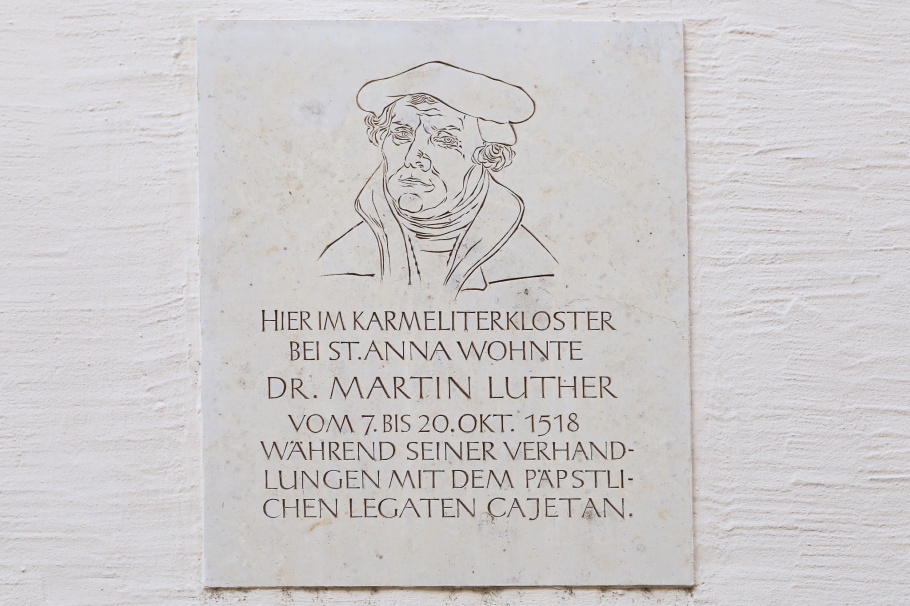 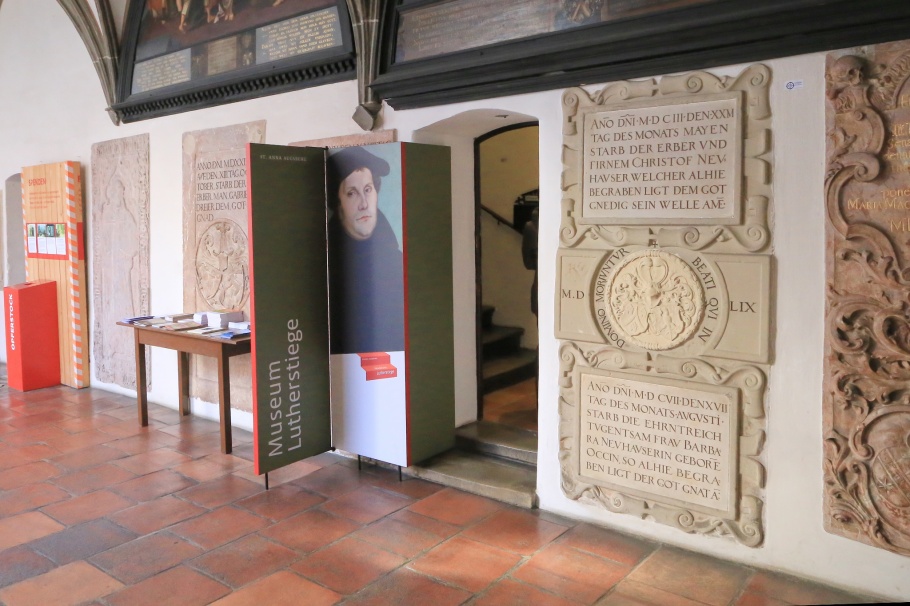 The cathedral was built on the foundations of a medieval church going back to the end of the 10th-century AD/CE. After the debate between Luther and Cajetan resulted in an unsatisfactory conclusion for either side, Luther posted at the cathedral’s portal a notice of dissent opposing Rome’s heresy trial against him.

Only the tower (as seen below) remains from the original episcopal palace at the centre of power and rule for the Bishopric of Augsburg which had been present since the Middle Ages. In May 1530, an imperial parliament (Diet) convened in Augsburg, and on June 25, the episcopal Palatinate proclaimed the Augsburg Confessions here in their primary chamber. The Augsburg Confessions are considered statements of faith for the Lutheran church, and an important historical document of the Reformation. The late-Baroque style building now houses government offices for the administrative district of Schwaben, one of seven districts in the German federal state of Bavaria.

The tower is all that remains of the former bishop’s residence. The colours of Bavaria, Germany, and the European Union now fly outside. 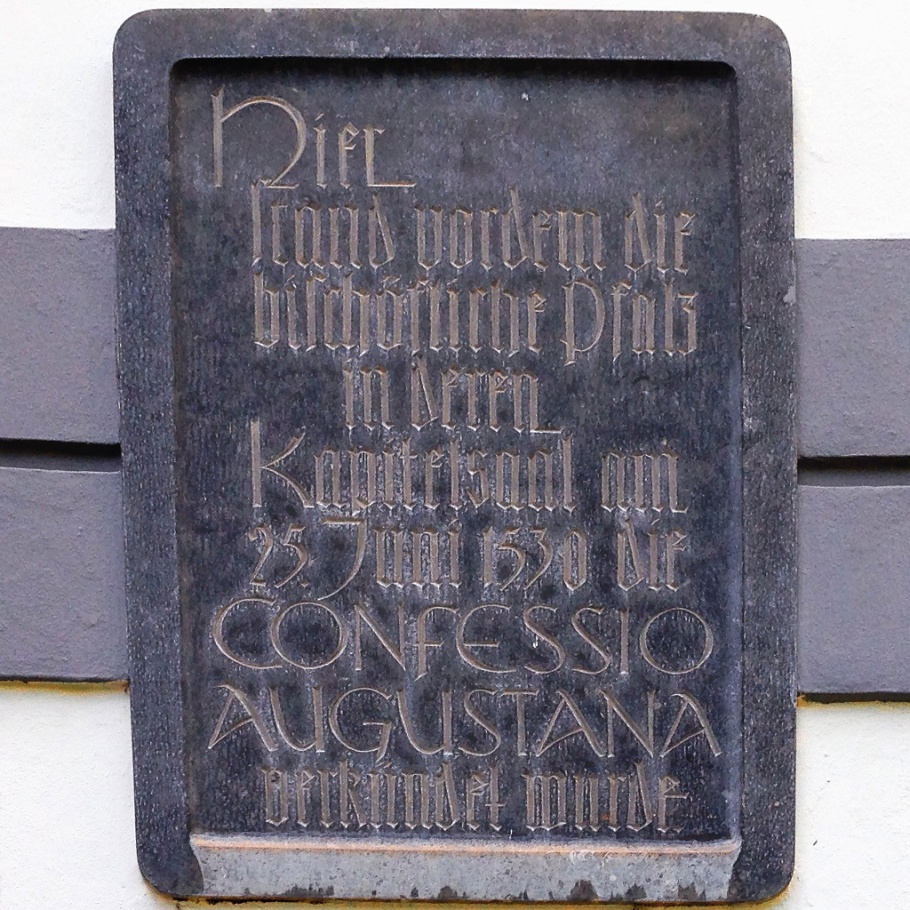 A church in some form has been present at this location since the 10th-century AD/CE. With arrest charges looming after refusing to surrender in debates with Cajetan in 1518, Luther escaped the city through a portal or gate in the city walls at this location on the night of October 21. Or so goes the legend, with the appearance of an additional plaque of “Da hinab!” or “down there (through the gate)!” 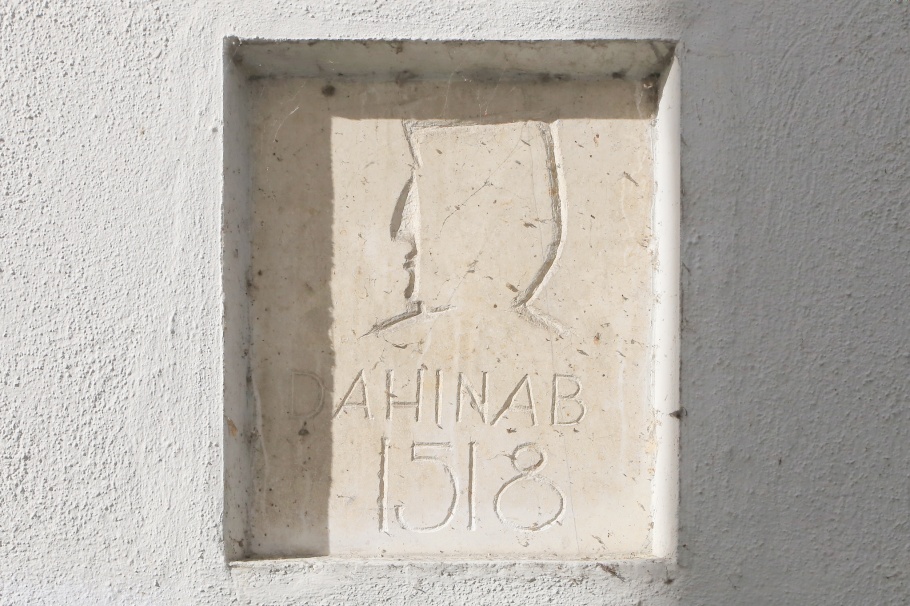 The legend of “Da hinab!”

Click on the arrow-window icon at the upper-left corner of the map below for the legend. All of the locations are easy to reach on foot or with public transit. Tram stops with the AVV transport authority are indicated as green circular icons. I’ve included a 2.5-kilometre path to catch all five locations.

Thanks to Augsburg Tourism for their support, Kristen Gast (née Strejc) for her time on the guided city tour, and to Hotel Am Alten Park for their hospitality. I’m also grateful to the staff at the Fugger und Welser Erlebnismuseum for pointing the way to Galluskirche. With the exception of one photo, I made the remaining photos between 10 and 12 March 2017. This post appears on Fotoeins Fotografie on fotoeins.com as http://wp.me/p1BIdT-9uj.