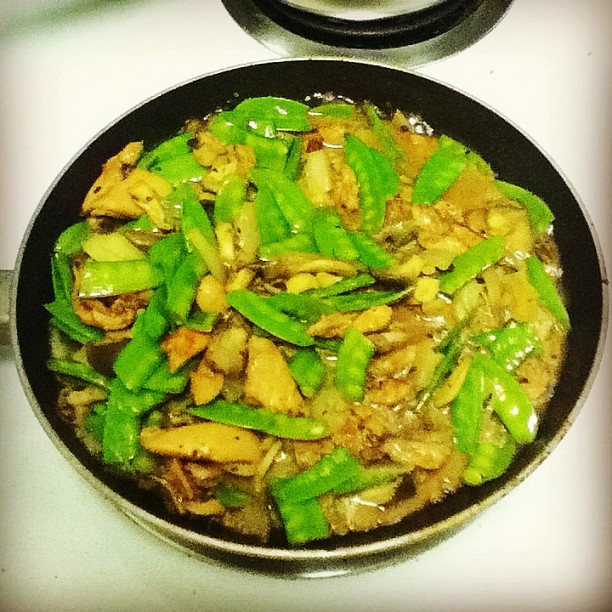 I’ve had versions of this dish before, hundreds of times, either at home or at a restaurant. When I decided to make this dish, I didn’t start with any recipe: it was all about ingredients, memory, and experience.

When I posted a picture of the final product (which was delicious), I was urged to describe my makeshift recipe. The most common question (re. demand) was: “how’d you make that?”

I describe here what I’ll make from scratch …

The following serves two to three people, and I generally like having this dish over white rice, but your choice of long grain, basmati, jasmine, or brown rice will do.

For the rice, you’ll need a medium-sized pot. Place the cups of rice and water into an uncovered pot. On full heat, bring the water to a boil, and boil away the remaining water. Cover the pot, turn the heat down to half, and cook for about 5 minutes. Uncover the pot, use a fork to run through the rice, which should be fluffy (neither too wet/soggy or dry/crunchy). Turn the heat to minimum (or off), cover the rice again, and let sit.

For the main dish, you will need a wok, skillet, or medium-sized frying pan.

Dice the garlic and ginger, and put them together into a small bowl or container.

Chop the vegetables, and put each vegetable into their separate bowl or plate: the onion into quarter-arcs about an inch (2 cm) in size, and mushrooms into bite-sized pieces.

To prepare the snow peas, what I like to do first is “string” them: I tear off by hand the tips of each of the snow peas, and quickly peel back, similar to a banana. This process removes the tough chewy tips as well as the stringy fibrous sides of the vegetable. Once the tips are removed, cut the snow peas in half along the short dimension.

Finally, into each vegetable, I’ll put a teaspoon’s amount of diced garlic and ginger.

Prepare the chicken into bite-sized pieces and place them into a bowl. Into the bowl, place two teaspoons (or a tablespoon) amount of diced garlic and ginger, one teaspoon of sesame oil, one-half to one teaspoon of soya sauce, and two heaping tablespoons of black bean garlic sauce. Mix thoroughly the chicken, garlic, ginger, seasme oil, and sauces. The marinade can take as little as the time required to cook the vegetables below.

In a fry-pan or wok, place a half- to full-teaspoon of cooking oil, which can be canola, sunflower, or vegetable oil. I do not recommend using olive oil, as the olive oil imparts a completely different (and unintended) flavour to this dish, which if you don’t already know by now is not Mediterranean!

The onions should be cooked until the appearance goes from opaque to a glossy translucent. The mushrooms are cooked until some of the water comes out of the mushrooms, keeping the mixture moist. If there’s a lot of “juice” coming out of the mushrooms, collect a couple of teaspoons into a separate bowl; you’re going to make a sauce with that below. With snow peas you have to be careful not to overcook them: my rule of thumb is between 30 and 60 seconds with frequent tossing. When cooked, the colour of the snow peas appears emerald-green. Cooked snow-peas appear to glow and be a little bit translucent; a quick bite into one of them will tell you if they’re cooked and yet retain a crunch.

After frying, you can put all of the cooked vegetables into a single bowl.

With a teaspoon of vegetable oil, stir fry the marinated chicken on high heat. Stir frequently, and check on the chicken by taking a piece out and cutting with knife and fork. Is the inside a consistent white and opaque? If the inside portion is still pink and translucent, more cooking time is required.

If there was “juice” from the mushrooms when you were cooking them above, you will have set aside a couple of teaspoons into a bowl. Even if you didn’t extract any mushroom juice, you can still make a sauce in a bowl, consisting of : two tablespoons of corn starch (or white flour), enough water to dissolve the corn starch, a tablespoon of oyster-flavoured sauce, and one to two teaspoons of black bean garlic sauce. Mix thoroughly, and set the bowl aside.

Once you’re satisfied the chicken is fully cooked, put all of the vegetables back in, and stir. Slowly stir in the sauce mixture. Turn the heat down to about half.

As the water heats and evaporates, the sauce thickens. Wait a couple of minutes, turn the heat down to minimum, and you’re now ready to eat. Serve this dish over a bed of rice, in either a bowl or a plate.

I made the photo above with a 4th-generation iPod Touch on 26 January 2013. This post appears on Fotoeins Fotopress at fotoeins.com as http://wp.me/p1BIdT-2Z0.