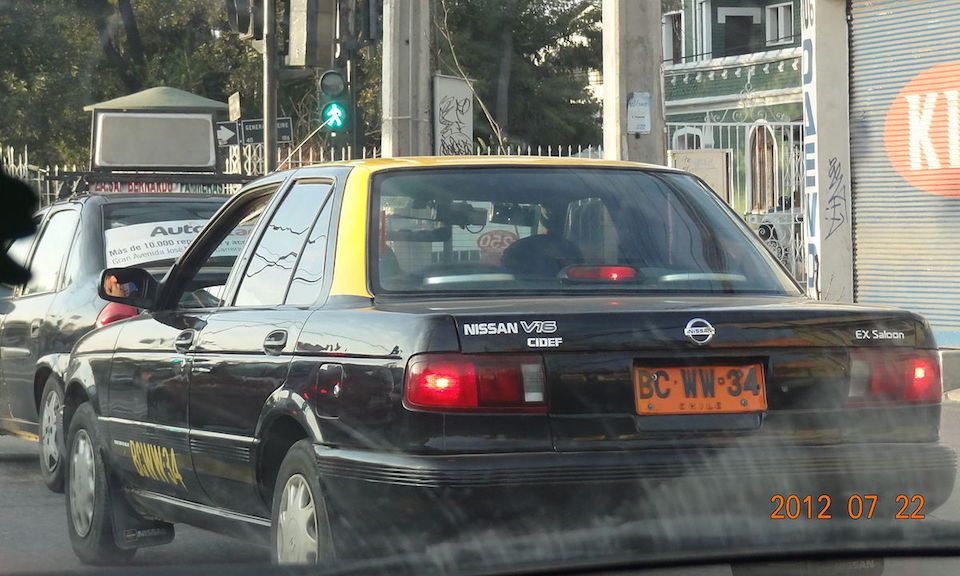 Imagine a cold foggy day in early-June, which is close to the end of fall here in the southern hemisphere. In the southeastern Pacific region along the Chilean coastline on which the town of La Serena lies, a wave of moist air can descend quickly from the ocean to sit snugly over town as a thick white puffy blanket.

On Friday, June 6, 2008, I was on my way from La Serena, Chile to a week-long meeting in Cambridge, England. I awoke on that Friday morning, puzzled by the unusually “dark” morning light. I pushed the drapes aside, and I was in a world of trouble.

I opened the front door and stepped outside onto the front porch – the fog was so thick I couldn’t see beyond about 10 metres (30 feet). I knew no airplanes would either land at or depart from La Serena airport in the thick grey soup, because at the time, the airport operated only under visual flight rules (VFR).

I asked around for possible options: taking a bus, driving a rental car to Santiago airport, or getting a taxi. The fog wasn’t budging by noon, and I made my decision. Instead of heading out to the airport in time for the scheduled early-afternoon flight, I asked a friend to drive me to the town’s bus station.

Throughout the country, long-distance transportation by bus is relatively inexpensive, is used by many, and works well. Although there are rail carriages carrying coal or other minerals, there are no longer any passenger train service between Santiago and the northern reaches of the country. Travel from La Serena to Santiago means plane, car, or bus.

I arrived at the La Serena bus station at about 1215pm. Through fault only of my own, this turned out to be about 15 minutes too late, because I had waited until the last possible minute to leave for the bus station.

I went around to the booths for various bus companies, asking when the next bus would leave La Serena to Santiago. Unfortunately, buses were leaving at either 130pm or 145pm, which was too late. Depending on the traffic on the Panamerican highway and through the outer suburbs of the capital region, the bus typically takes 6 to 7 hours to the terminus in downtown Santiago. With my flight from Santiago leaving at about 9pm, the math didn’t add right for me; I didn’t have enough time to go cross-town from downtown to the airport in time for check-in.

I was in a quandary, because I needed to catch my departing flight that evening from Santiago. The distance between La Serena and Santiago is about 475 kilometres on the highway. What to do, what to do … and I walked out the front-entrance of the bus station, considering my options.

Three vacant taxis were parked in front, their drivers in conversation. I then asked in broken-Spanish: “Excuse me, how much is a fare to the airport in Santiago?”

You know that moment when time slows down and you can see an individual leaf fluttering in a tree, or the up and down flap of a bird passing by. There’s also the moment where you can clearly see the thought bubbles go up over people’s heads, the words within the bubbles which are roughly translated as: “!!!”

In real time, only a few seconds had passed. One of the three gentlemen answered: “200 thousand mille (pesos)”, which at the time was about 400 US dollars. Without hesitation, I replied: “Great, let’s go!”

You know that moment when time slows down and … I can see the gears turning in their heads, and the bubbles in their heads suddenly popped, as they were clearly surprised that I’d been “silly enough” to take one of them up on their offer to drive me the 400 kilometres to Santiago.

At 1245pm, I stepped into one of the taxis, and we soon made our way south on the Panamerican highway. I offered to pay half of the fare up-front, and the other half upon arrival in Santiago. I have to admit that for about a minute I thought I was going to get robbed, and then dumped out of the taxi in the middle of nowhere.

About an hour south, the fog cleared, and it was crystal clear on the highway. Through most of the drive, I occasionally looked out the window to see if there was a plane with LAN-colours flying overhead on its way from La Serena to Santiago.

The taxi-ride itself was uneventful, I sat in the backseat, looked out at the scenery, dozed here and there, but I didn’t converse much with the driver. However, he received two interesting calls on his mobile in the first couple of hours.

I think his wife called first, because I imagined the first conversation to have gone something like this:

I think his drinking buddies called next, as I imagined the translation of the subsequent conversation to have gone something like this:

“Hey there … yeah, I can’t go out for a beer tonight … I’m taking a gringo to Santiago airport … yeah, the fog really messed things up … the guy’s paying me 200 thousand mille, can you believe it? … yeah, I know I’m buying a few rounds when we’re out for a beer … I’ll be back tomorrow night … yeah, talk to you later.”

I’ve taken the bus many times before, but the signage all state a maximum speed-limit of 100 kilometres per hour for buses on the highway, but the taxi’s crushing that limit in the middle stretches of the highway. From previous visits, I’m familiar with the scenery, the beautiful coast-hugging highway, weaving around the cliffs, saying hello to the waves crashing against the rocks from the Pacific.

Apart from a short break to tap a kidney, I stepped out of the taxi at the departures level of Santiago airport at 545pm – not bad for a brisk 5-hour taxi-ride. I hope the guy got back home to his wife okay, and bought many rounds for his buddies.

After check-in and clearing both passport-control and security, I walked into the American Airlines lounge, and connected the laptop to the internet. One of my colleagues was logged onto Skype, and I had to ask, I had to know : did the fog ever clear over La Serena?

She replied: no, still thick as ever, nothing got through the thick grey soup.

For the first time in hours, I exhaled a deep sigh of relief. Finally, I was on my way.

This really did happen on 6 June 2008 and I forked over 400 American dollars for a 5-hour 475-kilometre taxi ride. The top (featured) photo is from Wikipedia with the CC3 license. This post appears on Fotoeins Fotopress at fotoeins.com as http://wp.me/p1BIdT-as.