On 26 February 1919, U.S. Congress passed legislation “An Act to Establish the Grand Canyon National Park in the State of Arizona” which was signed by President Woodrow Wilson. With official designation, the national park encompasses over 1-million acres (almost 405-thousand hectares) and several thousand years of history of habitation in the area by indigenous peoples including the Havasupai, Hualapai, Hopi, Navajo, Paiute, and the Zuni who consider the Grand Canyon as their ancestral birthplace. UNESCO inscribed the Grand Canyon National Park as World Heritage Site in 1979.

The geology at the Grand Canyon, however, is much much older than 100 years. By geologic standards, the Grand Canyon itself is relatively “young” with the Colorado River carving into the rock about 5 to 6 million years ago. However, the Vishnu basement rock in the Grand Canyon is over 1.7 billion years old; “only” 38 percent as old as Earth’s oldest rocks at 4.5 billion years old. For a rough comparison, if a person celebrated their 50th birthday today for a total age of 18262.5 days, the equivalence of the basement rock forming occurred about 19 years ago, and erosion by the Colorado River taking shape only 24 days prior to the 50th birthday.

We spent three days in October 2018 exploring parts of the Grand Canyon National Park. After our drive from Flagstaff to Vermilion Cliffs, we pushed forward to the North Rim and the winding scenic drive took us to Point Imperial and Cape Royal in time for the day’s final illumination. With a night spent at the beautifully serene Cliff Dwellers Lodge, we retraced our drive back to Cameron, then turning west to Desert View and parts of the eastern end of the South Rim. With our new ‘base’ established in Flagstaff, we drove the following day to the main entrance of the Grand Canyon National Park (via Valle and Tusayan), and we spent the day in the western and central parts of the South Rim. The 1126 km (700 mi)# we covered over the three days was 22 percent of the entire 5049 km (3138 mi) we accumulated through parts of New Mexico and Arizona.

Four of Mary Colter’s buildings on the South Rim (Desert View Watchtower, Hermit’s Rest, Hopi House, and Lookout Studio) have been inscribed as U.S. National Historic Landmark properties in the National Register of Historic Places since 1987 (reference no. 87001436).

Millions of people visit the Grand Canyon National Park every year, but only ten percent of all visitors journey to the North Rim, which is why we had to come here first, before various facilities closed for the season.

Continuing our day’s drive from Flagstaff beyond Vermilion Cliffs, we head west along the Fredonia-Vermillion Cliffs Scenic Road (US-89A), followed by a distinct change of greenery scenery on the Kaibab Plateau-North Rim National Scenic Byway (AZ 67), south towards the North Rim.

At an elevation of 2683 metres (8803 feet), Point Imperial is the highest overlook not only at the North Rim, but also for the entire national park. The following two images were our first-ever sight of the Grand Canyon. 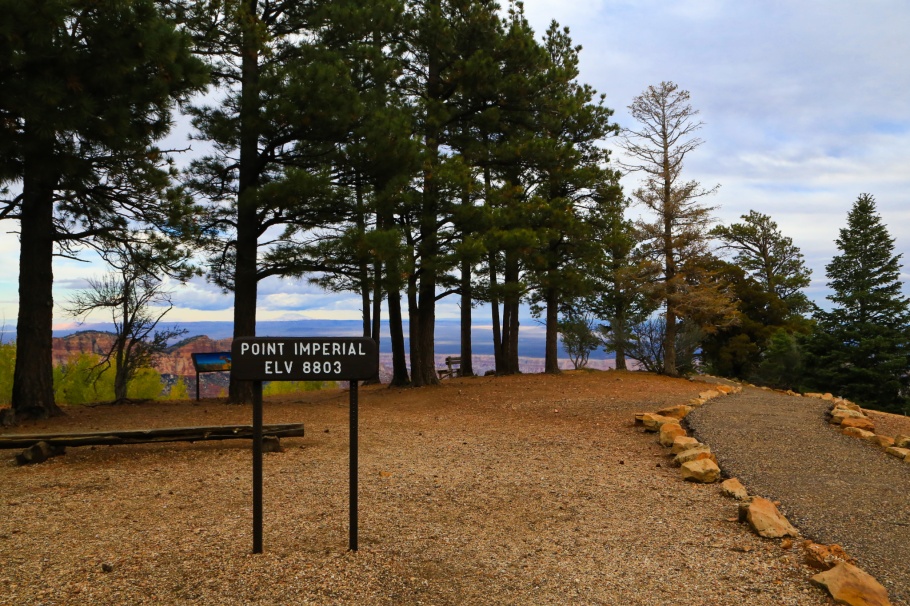 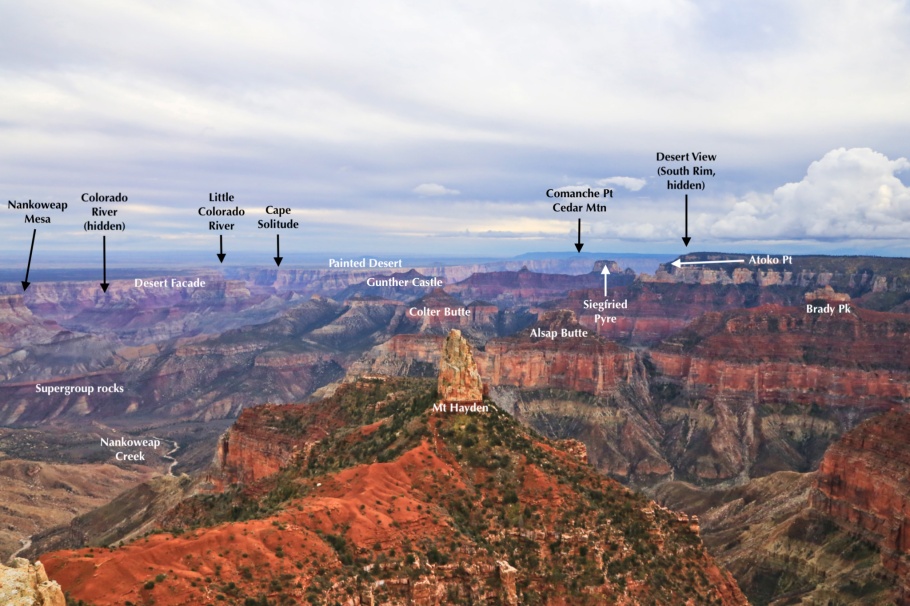 We rushed south to Cape Royal (2397 m / 7865 ft) in time for sunset. After parking the car, I’d forgotten about and underestimated the remaining hike from the parking lot to Cape Royal proper. The already overcast conditions seemed to get worse, but we arrived in time to see the final orange light of the day strike the rippled steepled face of Vishnu Temple. When the sun finally dipped below the horizon, the brewing thunderstorm to the west, dark ominous clouds collecting overhead, and past experiences as visiting astronomer to mountain-observatories in winter storms* meant a hasty retreat to the car and return to Marble Canyon. 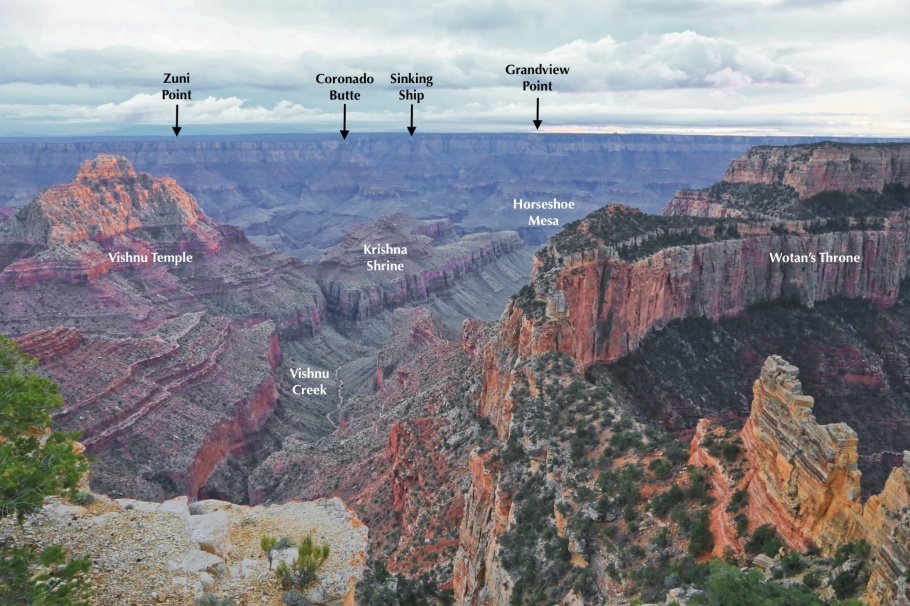 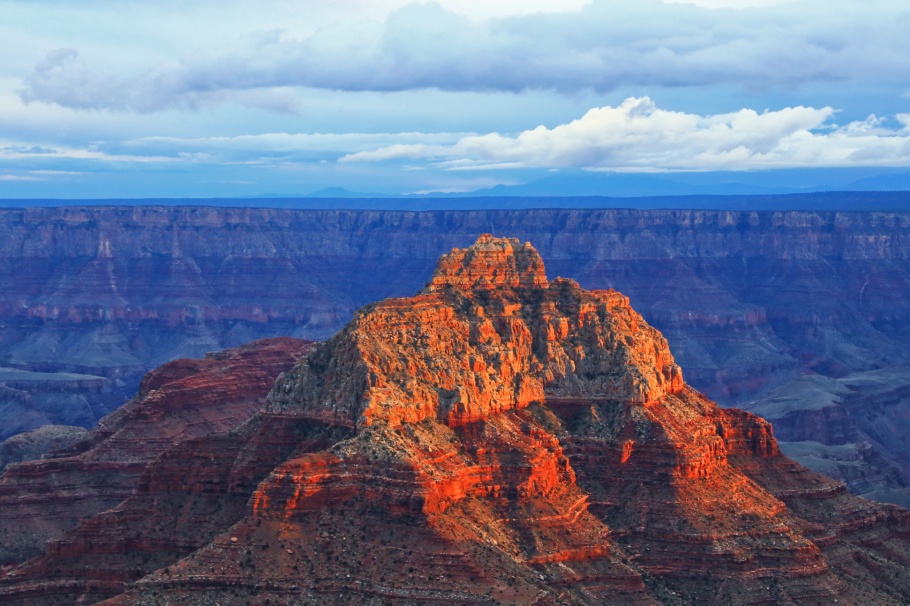 From Cape Royal: Vishnu Temple in sunset glow, with the South Rim in background and already in shadow.

The following day we awoke to clear brilliant blue skies in the Vermilion Cliffs and Marble Canyon area. We headed south to Cameron, then west to the Desert View. Desert View was our first-ever sight of the Grand Canyon from the South Rim.

Desert View Watchtower was designed and built by Mary Colter for the Fred Harvey Company in 1932 as a viewpoint and rest area for visitors. She wanted the tower as acknowledgement to other similar towers in the American Southwest. The foundation connected the building with the cliffs, the colour and texture of the exterior rocks matched the terrain. 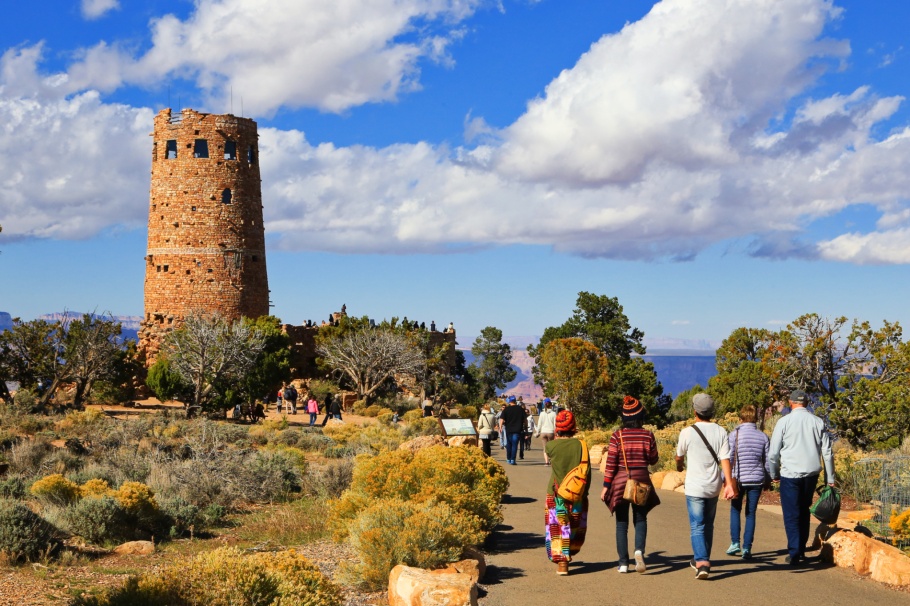 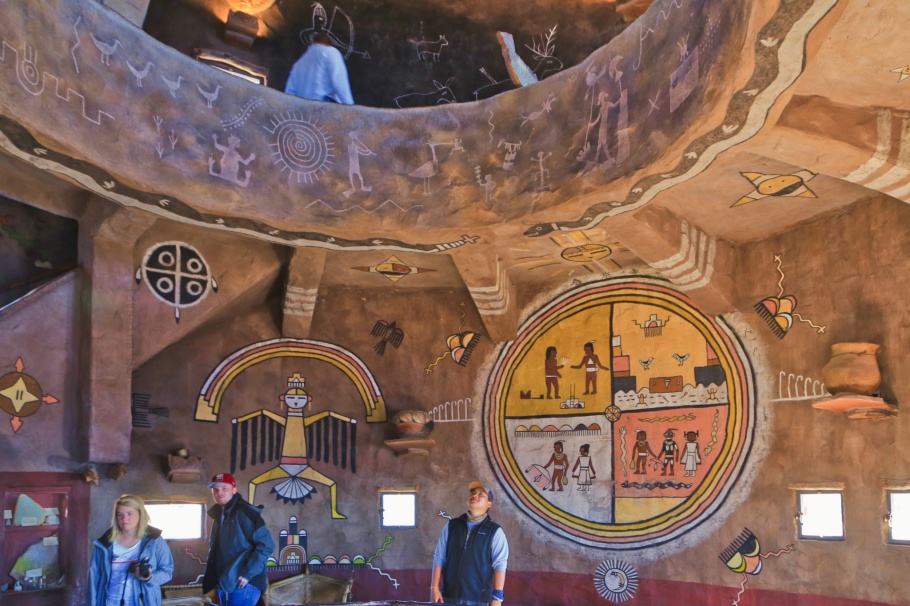 Desert View Watchtower: the interior space was designed to be evocative of kiva architecture. Reflections of Hopi heritage are seen in the painting and petroglyphs at left-centre by Hopi artists Fred Kabotie and Chester Dennis. Fred Harvey Company artist Fred Geary painted the upper floors with designs copied from original sites in the American Southwest. 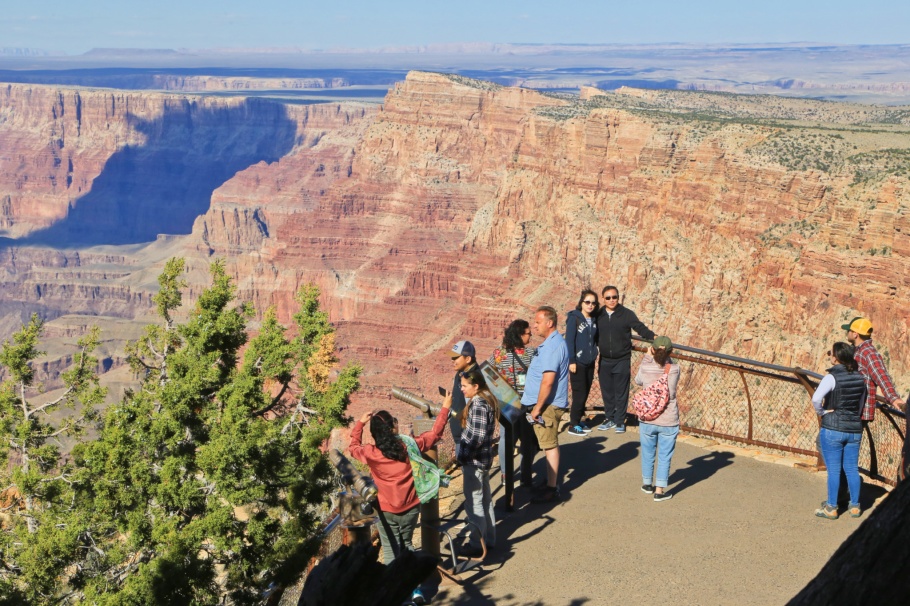 Like other visitors stunned by the view, I’m inside the Desert View Watchtower looking out as witness to complete fascination. 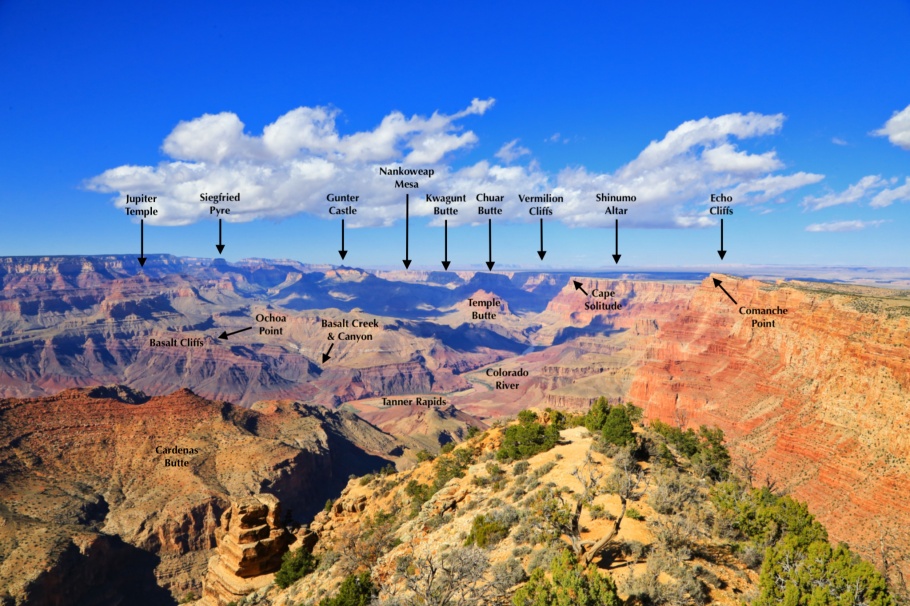 Visible from Lipan Point is the Unkar Delta where archaeologists have uncovered remnants of past Puebloan habitation from over one thousand years ago; many local indigenous people consider the Grand Canyon their ancestral home. Also visible are rocks of the Grand Canyon Supergroup, tilted by over 10 degrees because of tectonic forces fracturing the rock and pushing them up and over basement rock. Supergroup rocks were laid down at a time when the basin for the Pacific Ocean opened at ages between 0.75 and 1.2 billion years. The tops of the tilted Supergroup rocks are cut off by the Great Unconformity.

It’s at Lipan Point where we observed how earth and sky come to a still when the day draws to a close and bathes the landscape first in bright yellows, changing over to warm oranges, and finally to deep purples. 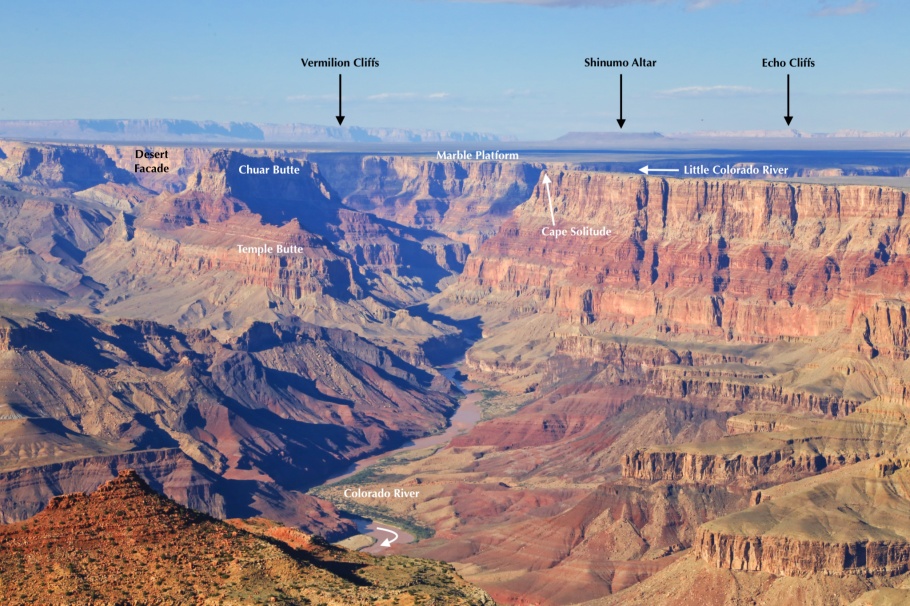 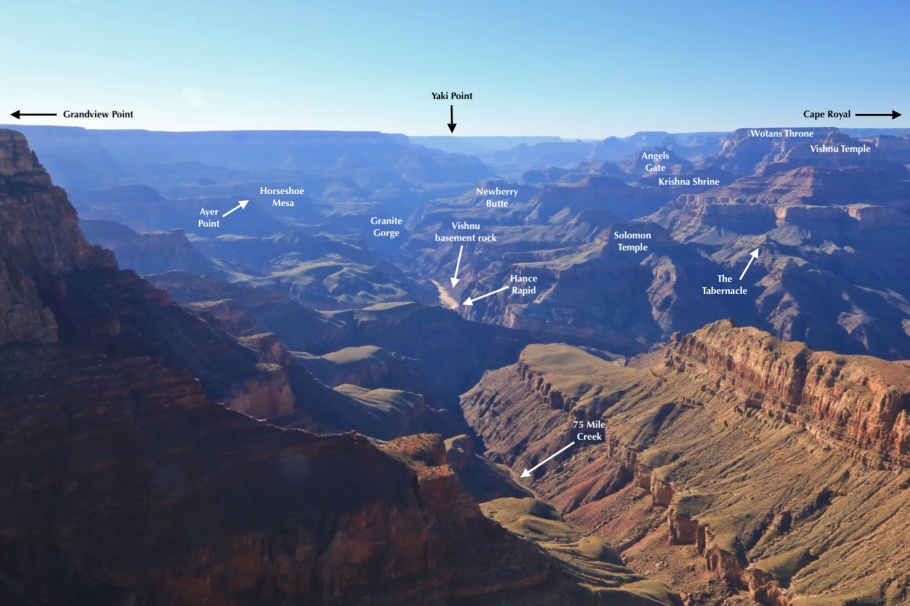 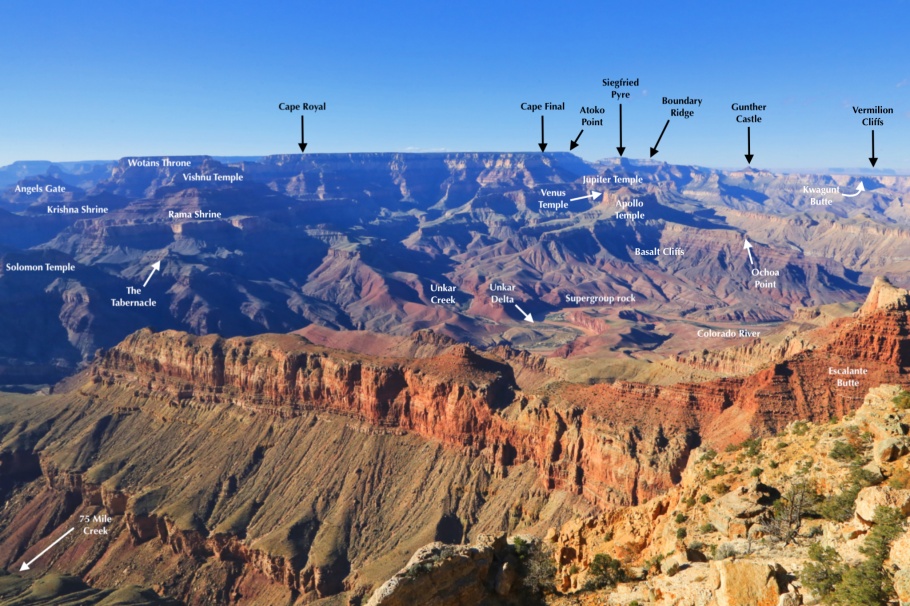 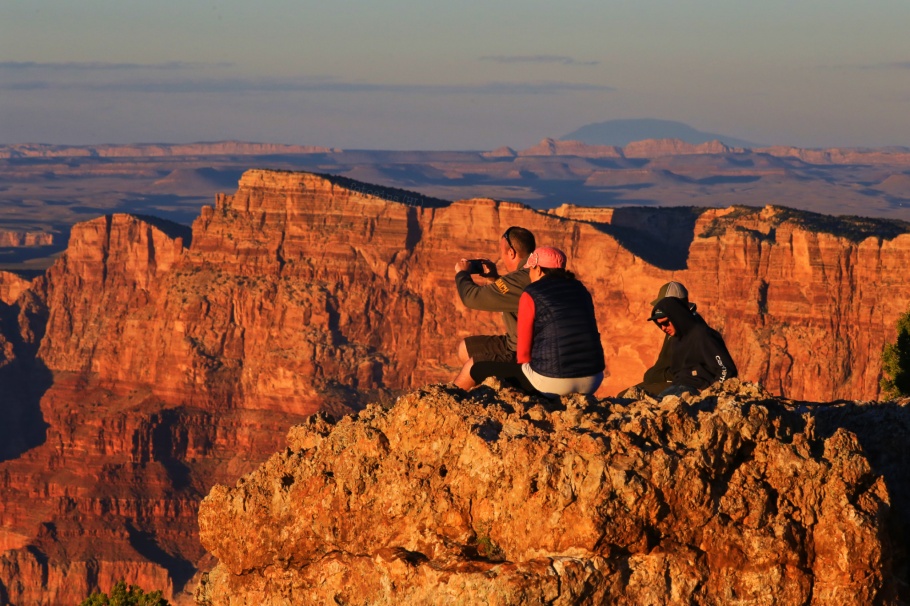 Sunset from Lipan Point, facing east to the orange-illuminated cliffs of the Palisades of the Desert. 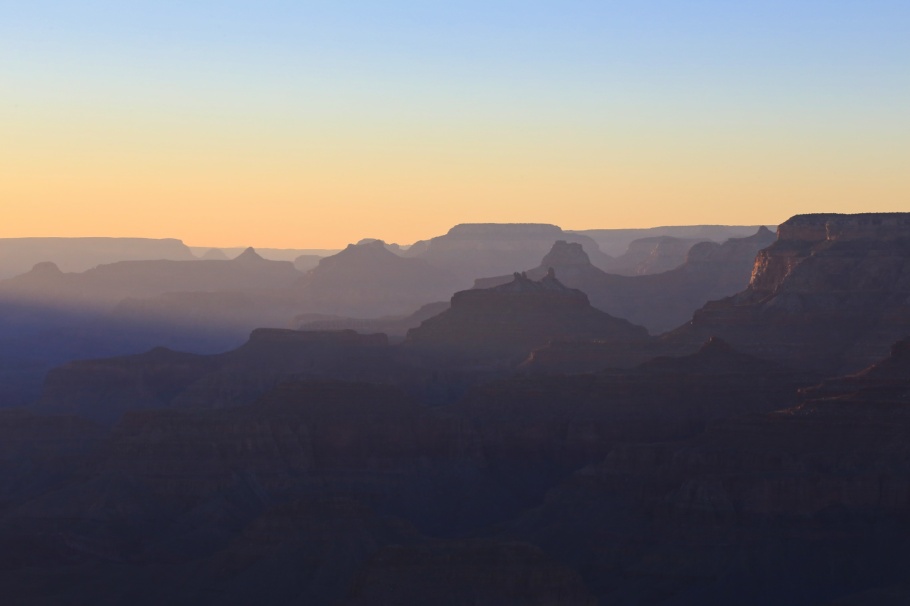 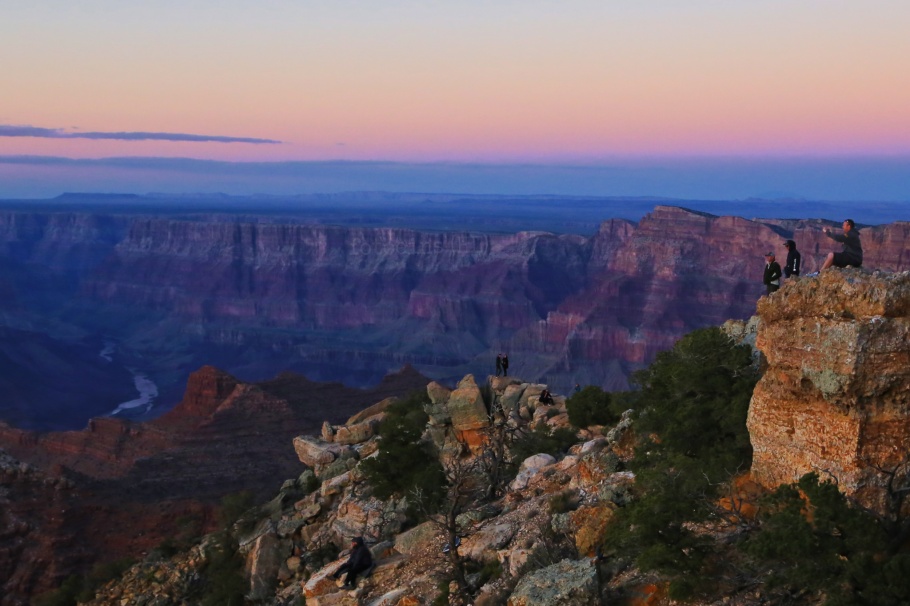 After sunset from Lipan Point: Earth’s shadow rises at sunset.

Beautiful clear and comfortable conditions greeted us on our third and final day, as we drove northwest from Flagstaff on highway US-180 and AZ-64 to the Grand Canyon Village area (via Valle and Tusayan). We spent an unrushed afternoon with the shuttle bus exploring the section of the South Rim between Hermit’s Rest and the Village. By late-afternoon, we wanted to have a look at the famous buildings designed and built by Mary Colter.

At Hermit’s Rest, a plaque reads: “Hermit’s Rest, constructed in 1914. Named for Louis Boucher, a prospector and miner, Hermit’s Rest is built into the side of this hill where Hermit’s Rim Road ends and Hermit’s Trail begins. Using native stone and wood, Mary Jane Colter designed the building to provide modern comforts garbed in primitive quaintness for the convenience of the traveler. The Santa Fe Railroad built the Hermit’s Rim Road as an alternative to the Bright Angel Trail, which was a toll road at that time.” 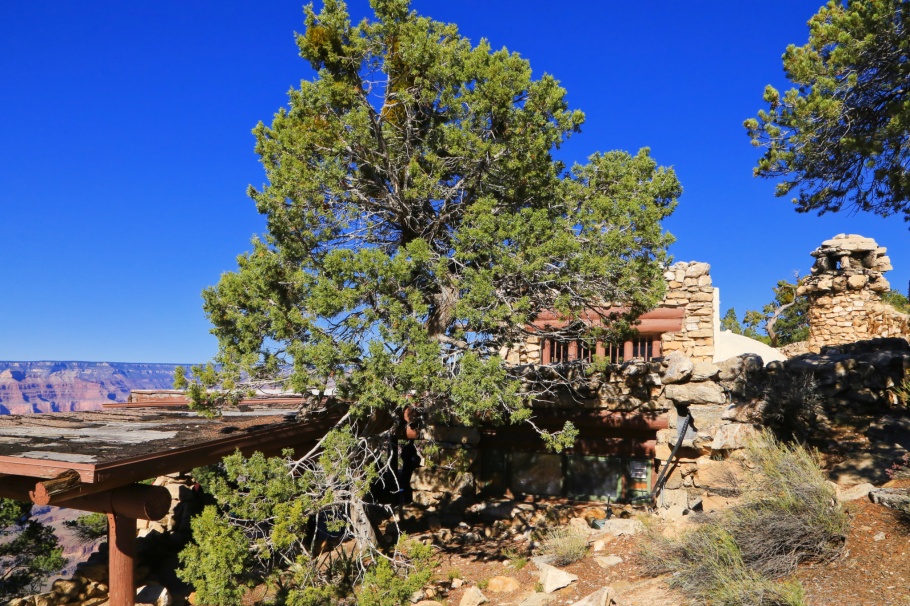 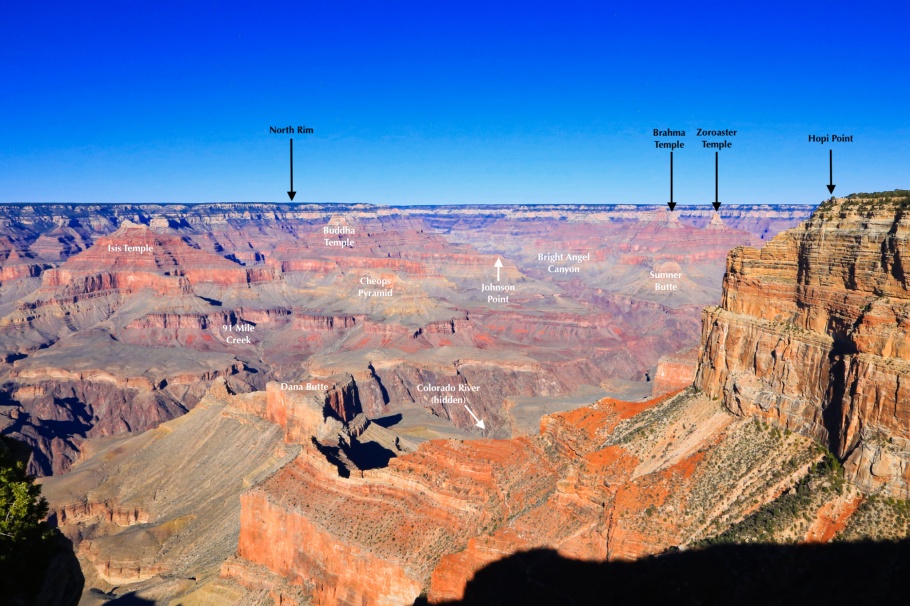 Within the Grand Canyon Village is a historic district which includes famous park buildings many which are listed as U.S. National Historic Landmarks or within the National Register of Historic Places. Many were designed to provide comfort and convenience to the increasing number of visitors in the 20th-century. The buildings themselves are noted for the construction, design, and integration with the surrounding landscape. Leaving her mark throughout the Grand Canyon (see Desert View and Hermit’s Rest above), American architect Mary Colter also left her mark in the Village with Bright Angel Lodge, Hopi House, and Lookout Studio.

We ended the day at the South Rim and our time at the Grand Canyon with last light striking the “temples” to the north. After dark, we were at Yavapai Point to visit before closing the Geology Museum to learn about the geology and chronology of the Grand Canyon. 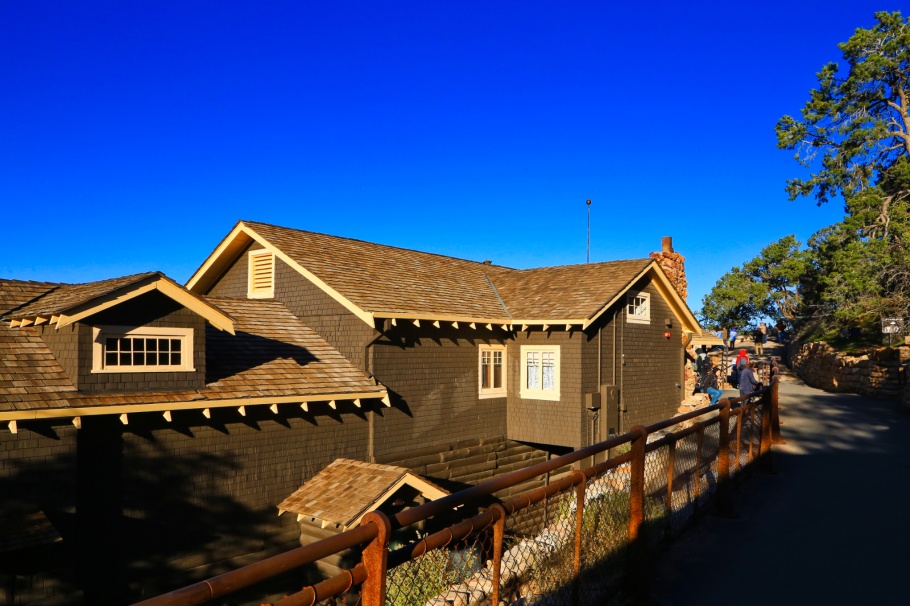 Kolb Studio, built by the Kolb brothers in 1904. 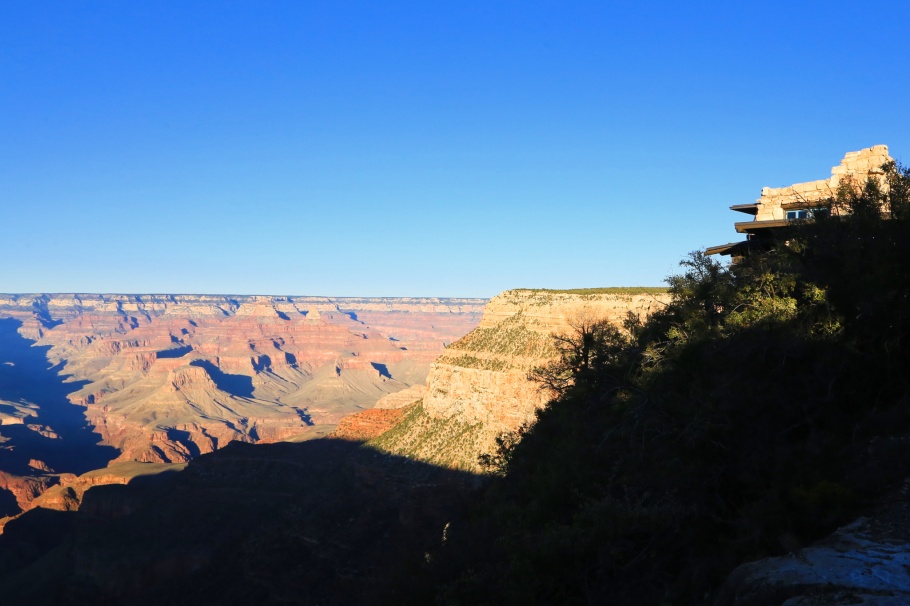 Lookout Studio, out across to Bright Angel Canyon at far left. 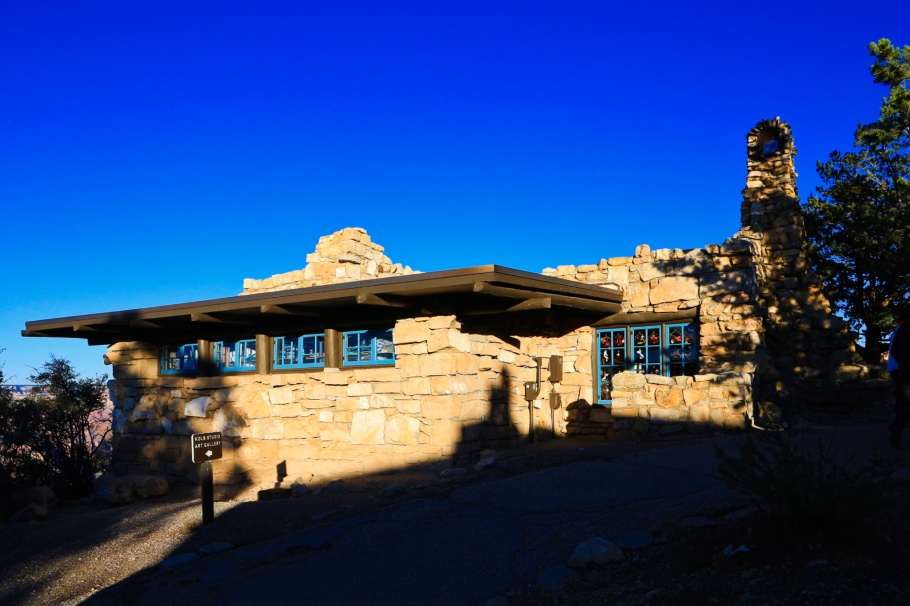 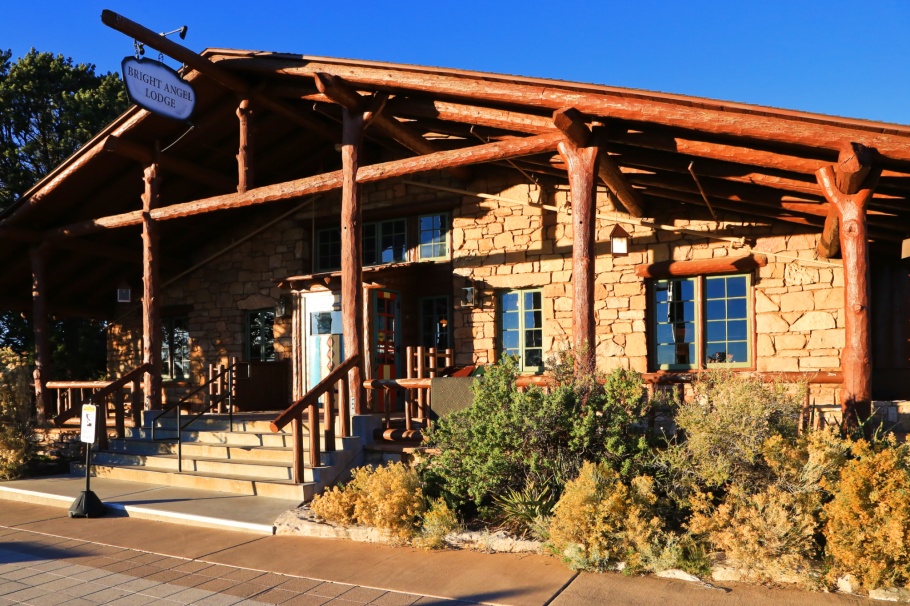 Bright Angel Lodge, designed by Mary Colter and completed in 1935 for the Fred Harvey Company. 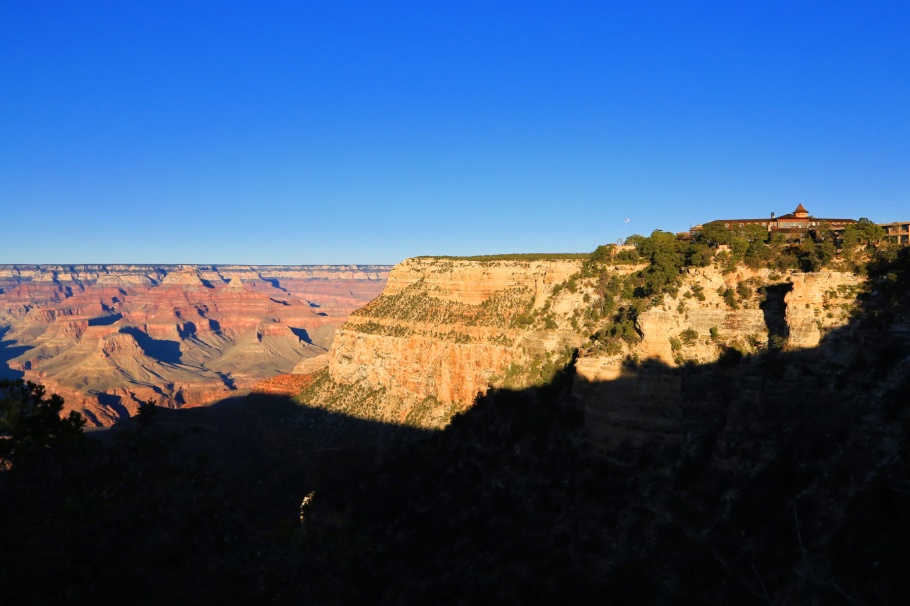 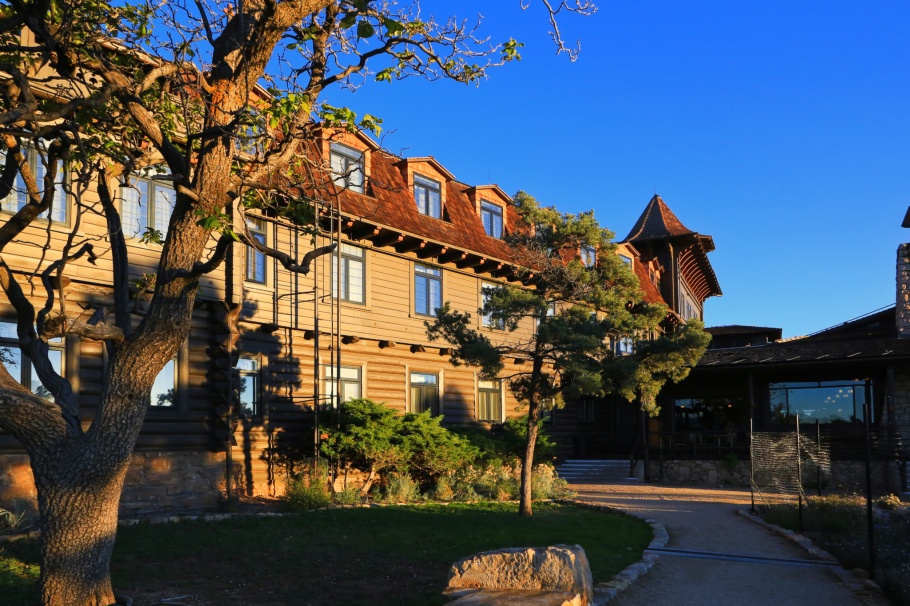 El Tovar Hotel, U.S. National Historic Landmark since 1974: designed by Charles Whittlesey and completed in 1905 as a destination hotel by the Atchison, Topeka and Santa Fe Railway who owned and operated the rail spur to the Grand Canyon’s South Rim. 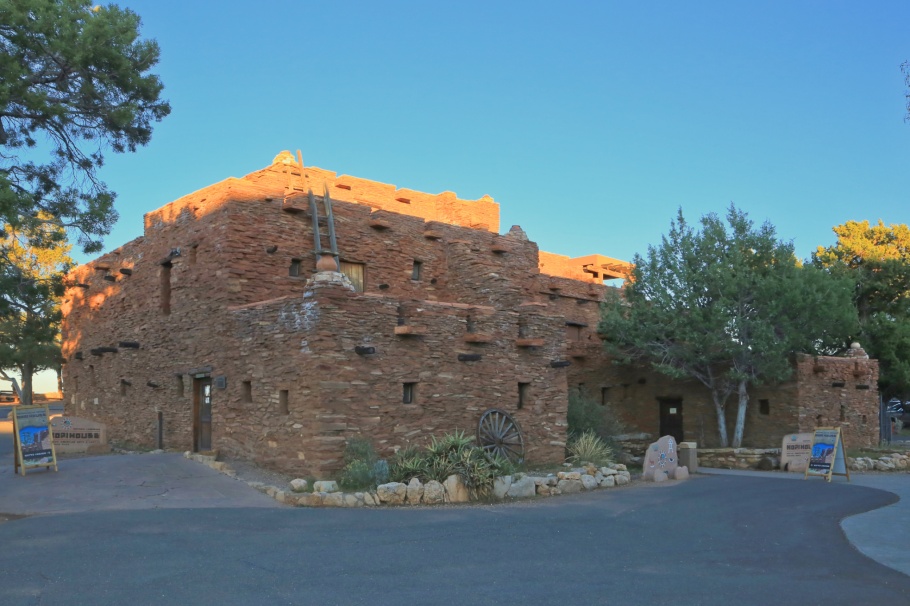 The plaque for Hopi House reads: “Designed as living quarters for Hopi artisans and as a place to sell Hopi crafts and souvenirs, this building represents the efforts of the Fred Harvey Company to revive Southwest Indian arts and crafts. Designed by Mary Jane Colter and constructed in 1905, the building was modeled after part of the Hopi village, Old Oraibi, at Third Mesa, retaining much of its original appearance.” U.S. National Historic Landmark, 1987. 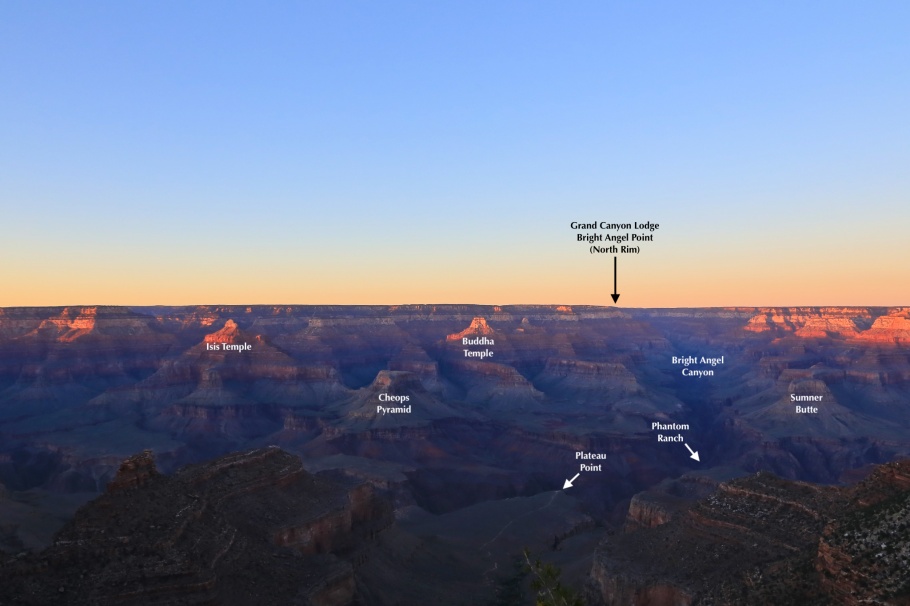 # Estimated one-way distances for a total of 563 km consisting of the following legs: 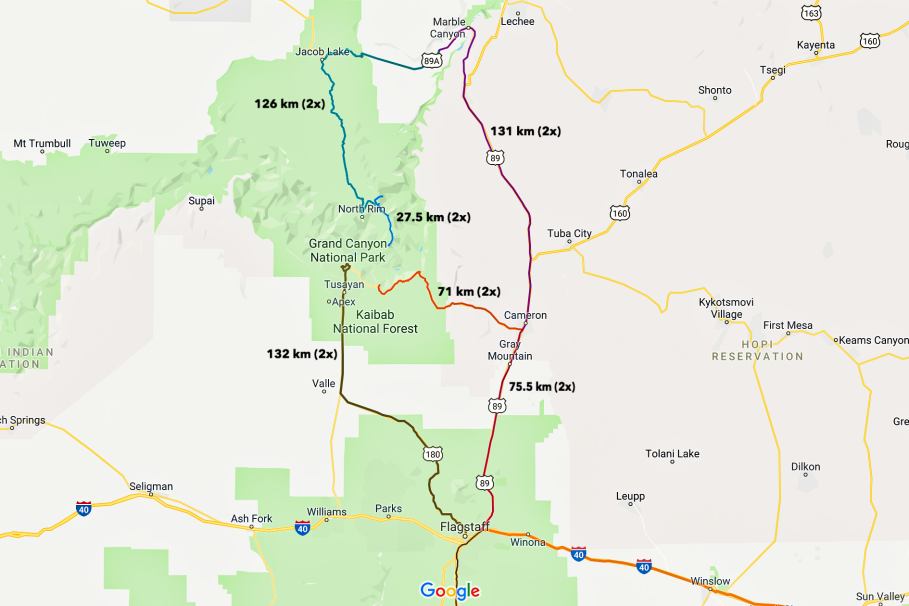 * I’ve spent a disproportionate and delightful amount of time at Cerro Tololo and Cerro Pachón in north-central Chile.

I made all photos above with a Canon 6D mark1 on 13, 14, and 15 October 2018. Line-of-sight measures in distance and azimuth were obtained with Google Earth. Thanks to AB for making this memorable trip possible. This post appears on Fotoeins Fotografie at fotoeins DOT com as https://wp.me/p1BIdT-c9U.