After a mid-May morning in the Alpbach alpine valley, I spent the afternoon on rail to Brenner via Innsbruck, with both legs of the Innsbruck-Brenner stretch on the S-Bahn Tirol S4* train. I used my Eurail Pass the entire day.

Squeezed between the Stubai- and Zillertal-Alps in the Wipptal (Wipp valley), Brenner Pass stands at an elevation of 1370 metres (4495 feet) above sea level and is one of the lowest mountain passes in the Alps. The low mountain pass meant that humans have known about, climbed, and traversed this area for thousands of years. It’s also why the Romans incorporated this pass from the 2nd century AD/CE as a part of a critical north-south trade and security link between the heart of the empire to the south and the frontier provinces to the north.

By the Middle Ages, the pass was a part of the Holy Roman Empire on the “Via Imperii”; this imperial road stretched from Rome to Stettin via Florenz, Verona, Innsbruck, Augsburg, Nürnburg, Leipzig, and Cölln (Berlin). In the mid 15th-century, most long-distance trade between Augsburg and Venice was transported through Brenner Pass; by the early 16th-century, a north-south postal route was founded.

Empress Maria Theresa of the Habsburg Empire ordered in 1777 an upgrade and development of the road through the pass to mitigate the dangers of summer landslides and winter avalanches on the important trade route. Recognizing good timing and an opportunity, German writer Johann Wolfgang von Goethe travelled through Italy between 1786 and 1788, fulfilling a lifelong dream. Goethe would have started from Munich and travelled on the road for two days with a stop in Innsbruck before entering Italy. From his notes, he published in 1816 “Italian Journey” which became a best-selling book of its time and paved the way for Germans to satisfy their romantic dreams by travelling to Italy. The Brenner Railway line was inaugurated in 1867, heralding a faster connection between Innsbruck and Bolzano and the first rail line through the Alps. Construction of the 38-kilometre Brenner Autobahn between Innsbruck and Brenner Pass began in 1959 and by April 1971, drivers got to experience the full width of a speedy highway, now known as the A13 in Austria and E45 in Europe.

From its origins, the road today is a vital link between northern and southern Europe, providing trade shipments by truck and rail transports. Concern about environmental impact by record numbers of trucks (about 2 million every year#) is also why the European Union initiated construction of the Brenner Base Tunnel to divert more freight onto rail and further cut rail journey times between Austria and Italy by about an hour.

It’s difficult to imagine a time in the recent past where this border was heavily guarded and all traffic was stopped and checked, with stories of smugglers secretly climbing over the border mountains in the dark and stories of death from exposure and misadventure. With Austria’s formal acceptance of the Schengen Agreement and entry into the Schengen Area, all border controls here were abolished on 1 April 1998.

Separate European nations with unguarded borders was once thought impossible. It’s a modern idea that cannot be underestimated and for which I’m thankful: I arrived by plane in Frankfurt, Germany where I entered the European Union. Because Germany, Austria, and Italy are within the Schengen area, I was able to travel freely among these nations. From Stazione Brennero, I walked out into town and across the border from Italy to Austria and back again, without checks or controls.

From Innsbruck into the Wipptal

Europabrücke / Europa Bridge. This 815-metre long bridge was a key to the construction of the Brenner Autobahn in the early-1960s. At a height of 190-metres, the bridge is the fourth highest in Europe.

BBT Baustelle construction site at Wolf, Steinach am Brenner. The Brenner Base Tunnel (BBT) will connect Innsbruck, Austria and Fortezza, Italy, with the world’s longest rail tunnel at a length of 55 km (34 mi) to carry freight and passenger rail underneath Brenner Pass, further cutting the travel time between Austria and Italy by an hour. 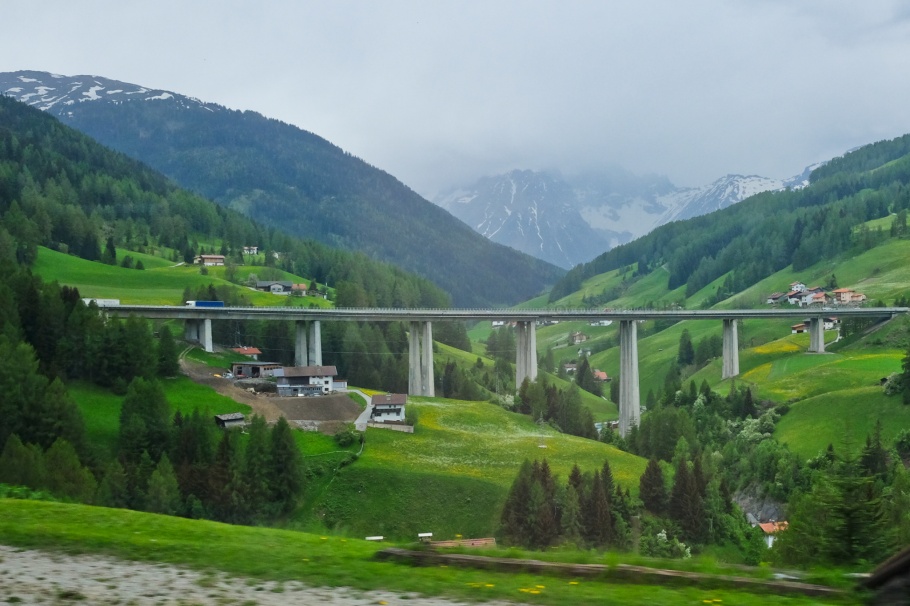 On-board southbound train, facing southwest to A13 overpass over Gries am Brenner. In the valley beyond is Obernberg am Brenner with Gstreinjöchl (2540 metres) obscured in low cloud in the background.

On-board southbound train approaching Brennersee, facing south. At lower left is the Fischzucht Vötter fish farm in Lueg, and at right is Austria’s A13 highway. Near centre in the background is Wolfendorn-Spina del Lupo whose 2774-metre summit is partly obscured by cloud. 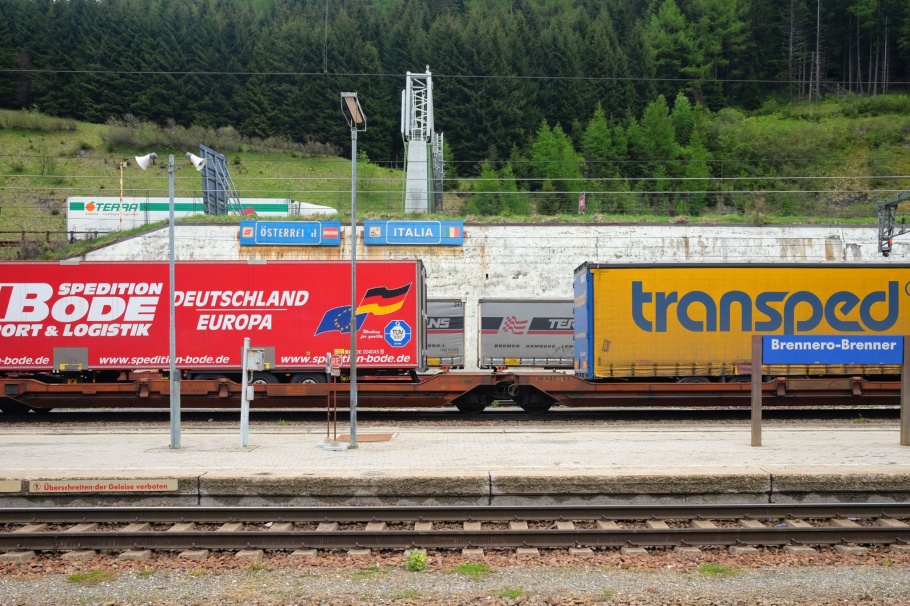 Our S-Bahn Tirol train from Innsbruck arrives at Stazione Brennero, at the divide between Brenner, Austria and Brennero, Italy. 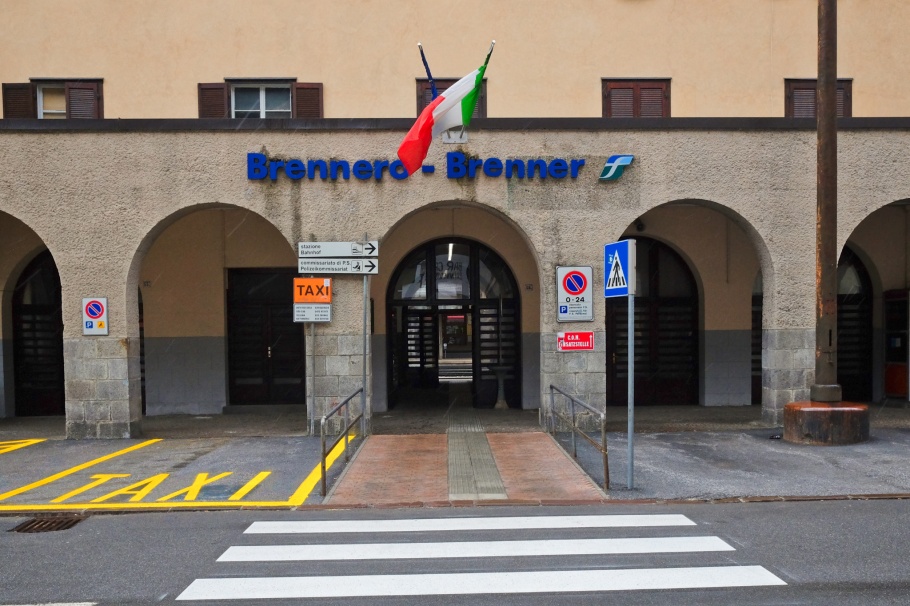 Goethe on his Italian Journey with memorial plaque at Via San Valentino 24. 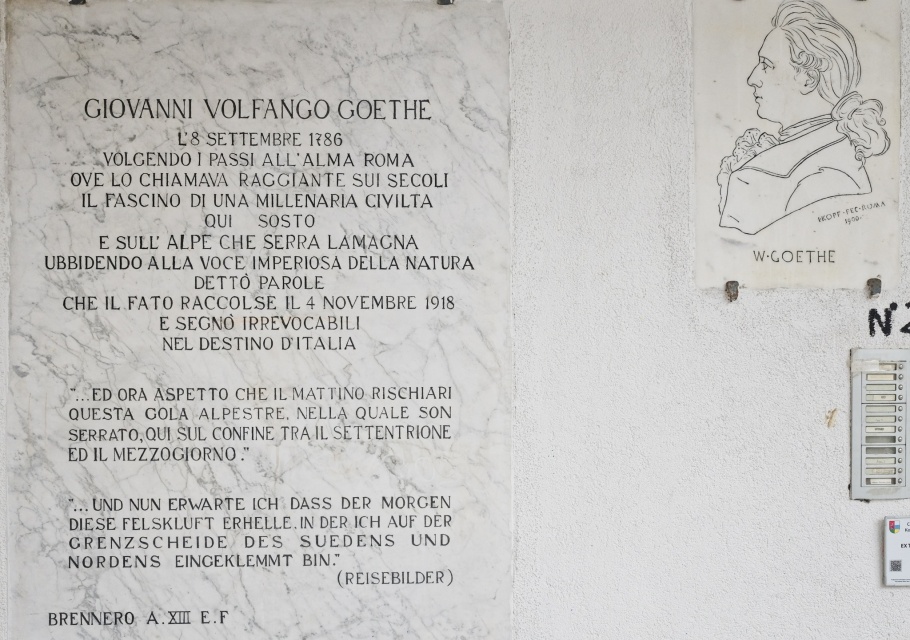 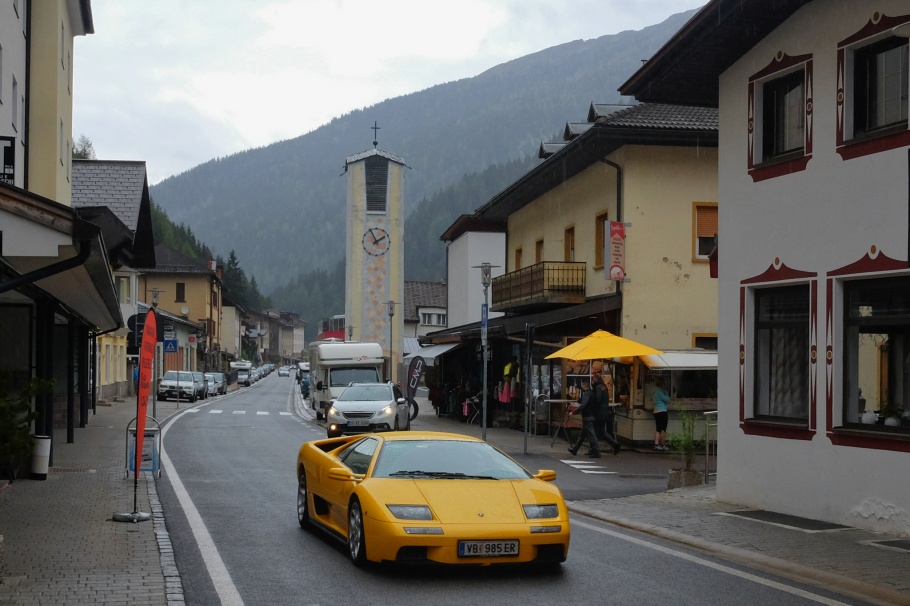 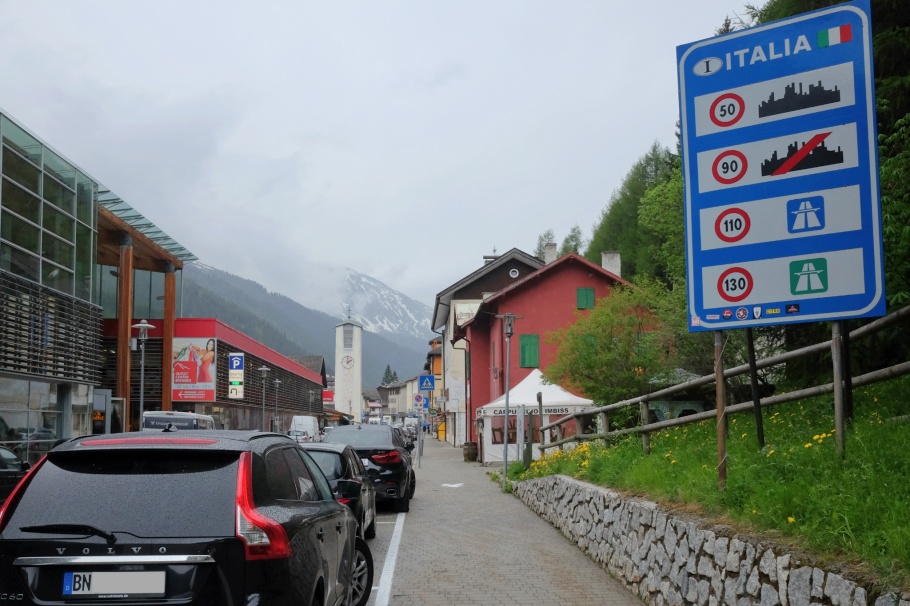 Facing north just inside Austria (Republik Österreich) in Brenner, with clothing store Grenzgänger Trachtenmode next to Austrian road B182. The blue plaque at left indicates the building location is within the Republic of Austria.

Located in Austria just inside the border with Italy, there used to be border controls and patrols here. The geographic location of Brenner Pass (+47.0073993, +11.5066996) is a couple of metres left of the parked “Polizei” police vehicle at lower-centre in front of the Shell gas station.

Beyond the Shell gas station in Austria’s Brenner is the kebab-shop döner-stop Brenner Kebab-Grill (left). 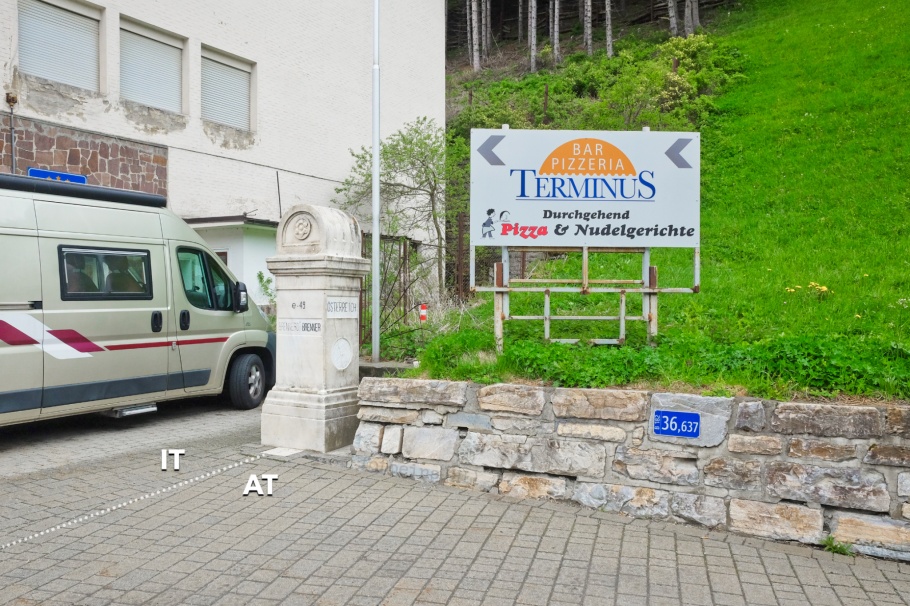 Border marker “e-49”. The border (Staatsgrenze / Confine di Stato) is indicated as a dotted line with “AT” and “IT” to show where Austria and Italy lie, respectively. The grass line going up to the right also follows the border. The blue plaque on the brick wall indicates the end of Austrian road B-182 at kilometre 36 point 637.

Facing south, where Austria road B-182 ends and Italy road SS-12 begins. The border marker “e-49” is at right from which I’ve marked the border as a dotted line. At right is a blue plaque indicates that the building is located in Italy.

Border marker “e-49”: Brenner, Österreich (Austria). Note the black line in the centre of the white square at the base of the column.

Border marker “e-49”: Brennero, Italia (Italy). Note the black line in the centre of the white square at the base of the column. 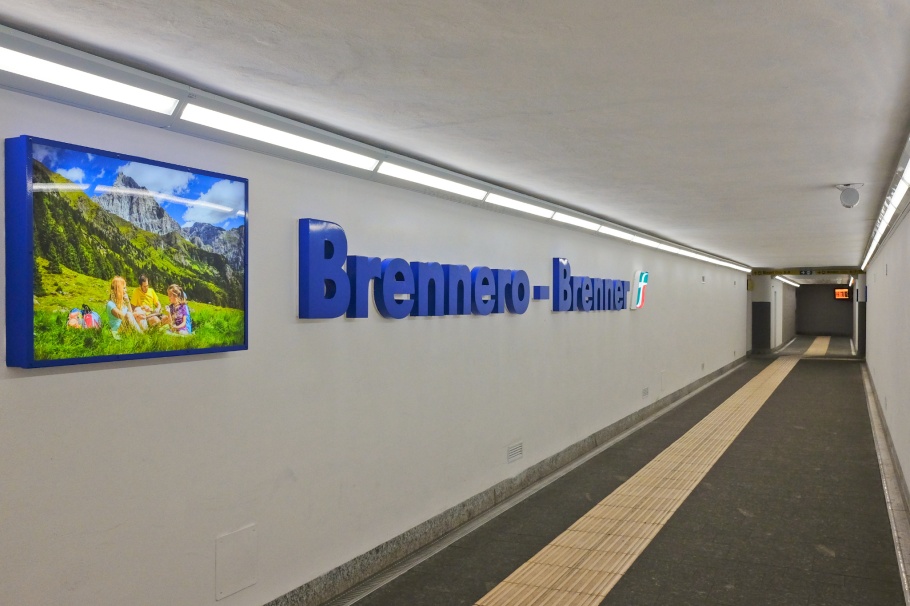 Facing south; at right is the north short-track TRN with ÖBB/VVT S-Bahn Tirol train preparing to return northbound for Innsbruck.

I made all photos above on 14 May 2018 with a Fujifilm X70 fixed-lens prime. Alle Fotoaufnahmen sind von Wasserzeichen versehen worden. This post appears on Fotoeins Fotografie at fotoeins DOT com as https://wp.me/p1BIdT-cc8.

6 Responses to “My Tirol: Brenner Pass”