Where: Scharnitz, at the northern edge of Austria’s Tirol, next to the Austro-German frontier.
What: Porta Claudia, mid 17th-century fortifications directed by and named after Claudia de’ Medici.
BTW: Scharnitz Pass is technically not a mountain pass.

I’m interested in geography, historical relics, and the topography of European borders.

Scharnitz Pass is one of the lowest crossing points over the Alps at an elevation of only 955 metres (3130 feet) with the Wetterstein mountains on one side to the west and the Karwendel mountains to the other side in the east. The pass might better be described as a “gorge”, given how the Isar river traverses the valley floor between the two sets of mountains. Naturally, a road at this location would’ve been ideal as a vital north-south route for trade and communication, which is why the Romans built the stone road, Via Raetia, through the river valley. A 200-metre section of this old Roman road remains in the woods outside the nearby town of Klais. The location of the pass/gorge is also why the Romans built a guard station “Mansio Scarbia” here to control traffic between the northern outer provinces and the rest of the inner empire to the south.

One of the earliest records from the 8th-century AD/CE documents the establishment of Scaraza Monastery, known also as Scarantia#. The name evolved to “Scaraz”, “Scarbia”, “Scarnize”, and eventually “Scharnitz”. Today, between 1300 and 1400 people live in the Austrian town of Scharnitz in the Tirolean region of Seefeld. The town lies on the road between Innsbruck and Munich and next to the international border between Austria and Germany; the strategic importance of this modest town has never gone away.

“Porta Claudia” is the name of former fortifications on high ground at a narrow curve over the Isar river valley. In the midst of the pan-European Thirty Years War, Claudia de’ Medici, the Regent of Austrian Tirol, ordered in 1632 the construction of a strategic defensive rampart at the Tirol-Bavaria border to protect Tirol’s northern border from invasion by Swedish forces. The Bavarians overran the rampart in 1706, but fortifications were expanded in 1766. Johann Wolfgang von Goethe wrote about passing through Scharnitz in 1786 on his journey into Italy. In 1805, Napolean’s army laid siege and destroyed the fortifications, freeing the path for joint French-Bavarian armed forces to enter Austria. Remnants of the retaining wall up to six metres in height and an archway through the wall are visible today.

I’m up and about at dawn, and within 50 minutes on an S-Bahn Tirol S5* train from Innsbruck, I’m about to satisfy my curiosity about this stretch of the Tirolean landscape in Scharnitz. With the existing Schengen treaty among participating European nations, anyone can walk, bike, or drive freely across the unguarded international border between Austria and Germany%.

# “Scar” (noun), 2nd etymological meaning.
% I entered the European Union at Frankfurt am Main international airport where I went through passport check and control.
* S5 in May 2018; renumbered as S6 as of Oct 2020.

Construction of the Scharnitz bypass tunnel^ for Seefelder Straße (B177/Euro E533); next to remnants of the Porta Claudia, and Isar river (6D1). 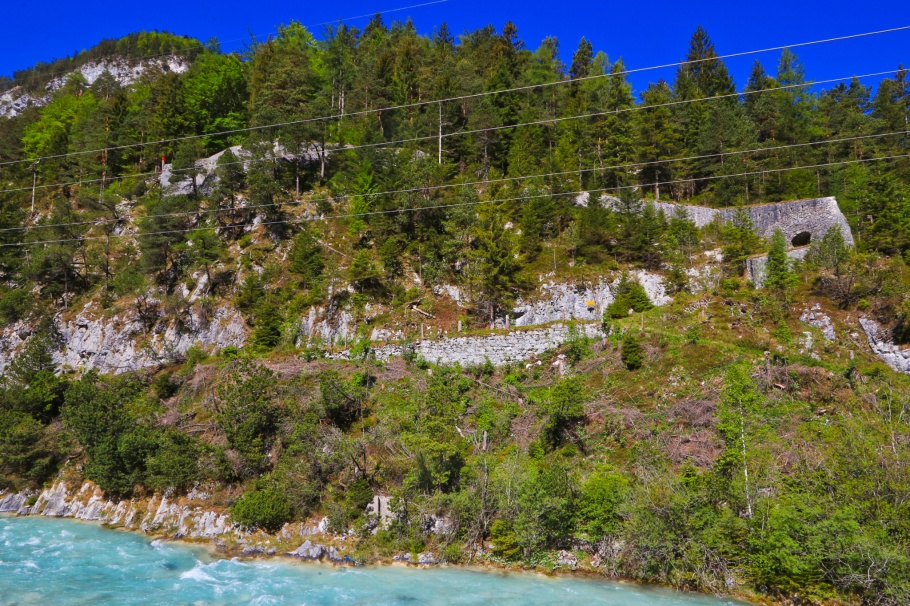 From Austrian side of the border, the Isar river flows north into Germany with Grosse Arnspitze (2196 m) at left-centre. Photo with 6D1.

Scharnitz Pass: on the Bavaria/German side, entering Tirol/Austria marked by the stone stele at the international border. The Schengen Agreement means unrestricted passage across the border. The Mittenwaldbahn railway runs parallel to the highway and in the distance at left-centre is a former railway building once used for border checks. Photo with 6D1.

Scharnitz pass: on the Austrian side where the border is indicated by the Tirol stone stele next to the highway and a small white stone marker on the other side of the rail track (centre-right). The barrier in the vertical position is used in winter to block access when the avalanche threat level is high. Photo with 6D1.

“Scharnitz: gateway to the Karwendel.” Near the former customs house in Scharnitz, the light-green larch wood column is one of many throughout the region, providing testament to the formerly controlled border region. Photo with 6D1.

I made all photos above on 12 May 2018 with a Canon EOS 6D mark 1 (6D1) and a Fujifilm X70 (X70) fixed-lens prime. Alle Fotoaufnahmen sind von Wasserzeichen versehen worden. This post appears on Fotoeins Fotografie at fotoeins DOT com as https://wp.me/p1BIdT-cag.

Digitized version of 13th-century AD/CE Peutinger map which itself is a copy of a map from the 4th- to 7th-century AD/CE. Shown is the upper portion of segment IV; the road marked by a thick red line connects Augusta Vindelicum (Augsburg) and Tredente (Trento) at left and right, respectively. Locations with former and contemporary names along the way are listed in white text at the top of the image. The rest stop “Mansio Scarbia” (Scharnitz) was located between Scarbia (Mittenwald) and Vetonina (Innsbruck-Wilten). Sources: Omnes Viae, Tabula Peutingeriana.

15 Responses to “My Tirol: Scharnitz and Porta Claudia”