Vienna is as much a present-day cultural capital city as she was for decades and centuries. Many will get a peek and taste of long-established aspects of the city by walking the streets of the Old Town for the atmosphere, chatting in cozy cafés with coffee and cake for the ambience, and swaying to the rhythms of the waltz under the spell of the (blue) Danube.

The early years of the 20th-century were troubled by greater calls for more autonomy from multiple ethnic groups within the patchwork of the Austro-Hungarian empire, by destruction and loss of life from The Great War (World War I), and by subsequent dissolution of the Empire. The capital city became an open theatre for socioeconomic and political changes across all class divisions within an environment where rebellion and revolution were the big talking points against the dogma of long-held traditions. Deep longing for the stability of the old and familiar mingled with equally enthusiastic desire for the radical of the new and mysterious.

Many in the arts, design, and cultural scene were questioning the excessive persistence of past styles, and were seeking something new to better represent changes happening all around them in Vienna. In 1897, a group of artists and architects resigned from the established Künstlerhaus to form the Vereinigung Bildender Künstler Österreichs (Union of Austrian Artists), known also as the Vienna Secession. Architecture moved towards a sharper focus to geometry and abstraction, and art flowed to the decorative with organic floral-like designs in the Jugendstil, Art Nouveau’s chapter in German-speaking lands. To promote their new ideas, the Secession group produced an official magazine called Ver Sacrum (“sacred spring” in Latin, 1898) and constructed the Secession building (1897) as an exhibition hall to display their work. The Wiener Werkstätte (Vienna Workshops) was created in 1903 as an association of artists whose thinking and applied arts creations were a precursor to the Bauhaus movement. Members of the Werkstätte worked with Vienna’s architects to broaden and unite the various concepts for a complete artwork, or Gesamtkunstwerk, as applied to a living space: the house, its rooms and furnishings, the interplay of light and space, and the tools and utensils for every day aspects of living.

Some of the key figures and influencers of the city’s “new modernism” in the art, design, and architectural scene include:

Some of their work from various locations in Vienna are highlighted below. From the list above, four died in 1918: Klimt on February 6, Wagner on April 11, Moser on October 18, and Schiele on October 31. In the centenary of their deaths, Vienna has marked all of 2018 as the year of Vienna Modernism (Wiener Moderne). 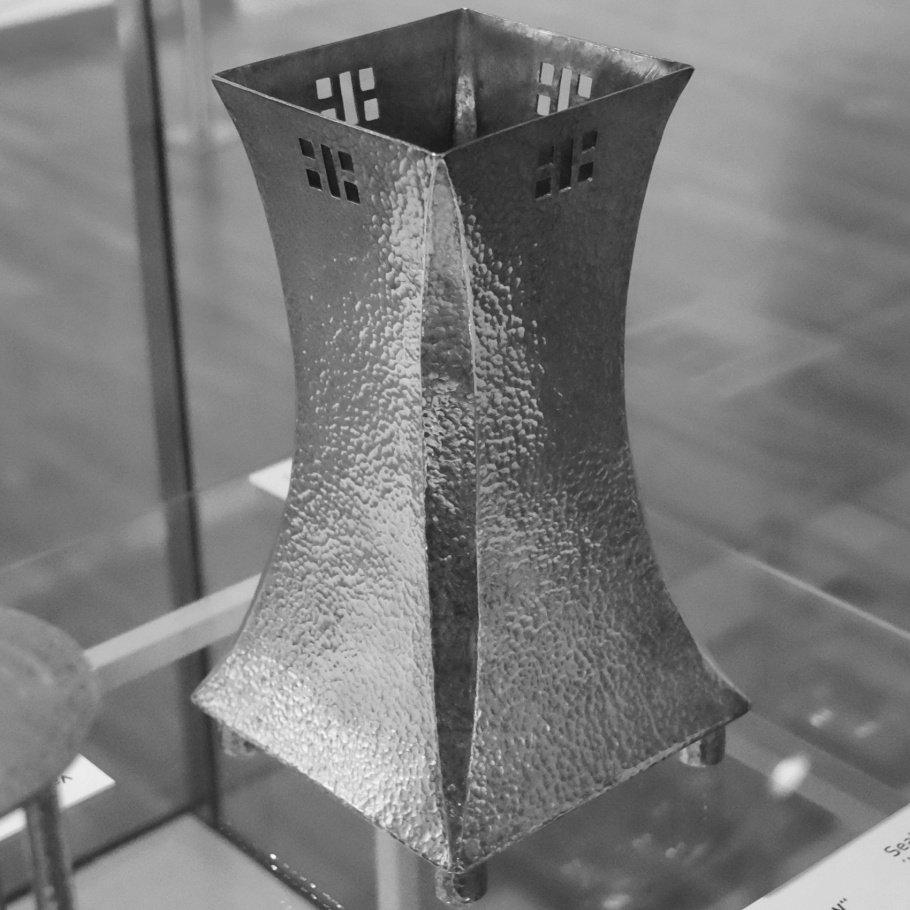 This vase by Josef Hoffmann was manufactured by the Wiener Werkstätte in 1904. The Wiener Werkstätte (Vienna Workshop) was formed to produce visual art which brought together a mix of architects, artists, and designers working with a variety of materials1. The vase consists of copper and silver-plating, then beat into shape and finished with patina. What’s unusual is the vase does not have a classic rounded curved shape, and yet: “The early metalwork of the Wiener Werkstätte is characterized by elegant outlines that emphasize the geometry of the forms concerned. Objects are pared down to their essential elements, allowing function and form to fuse into an artistic whole.” (Seen at Wien Museum Karlsplatz.) 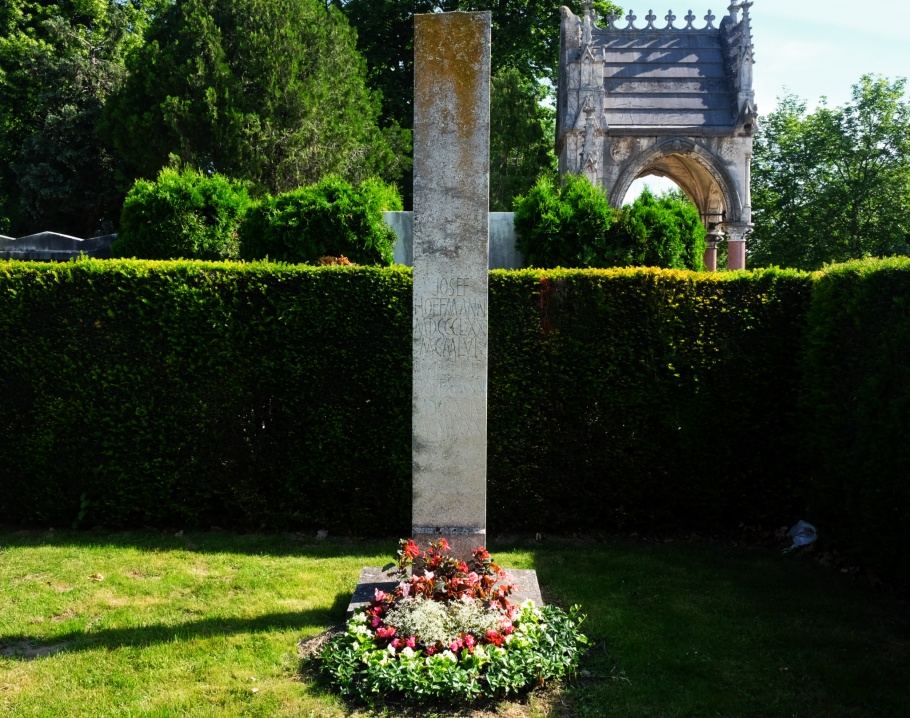 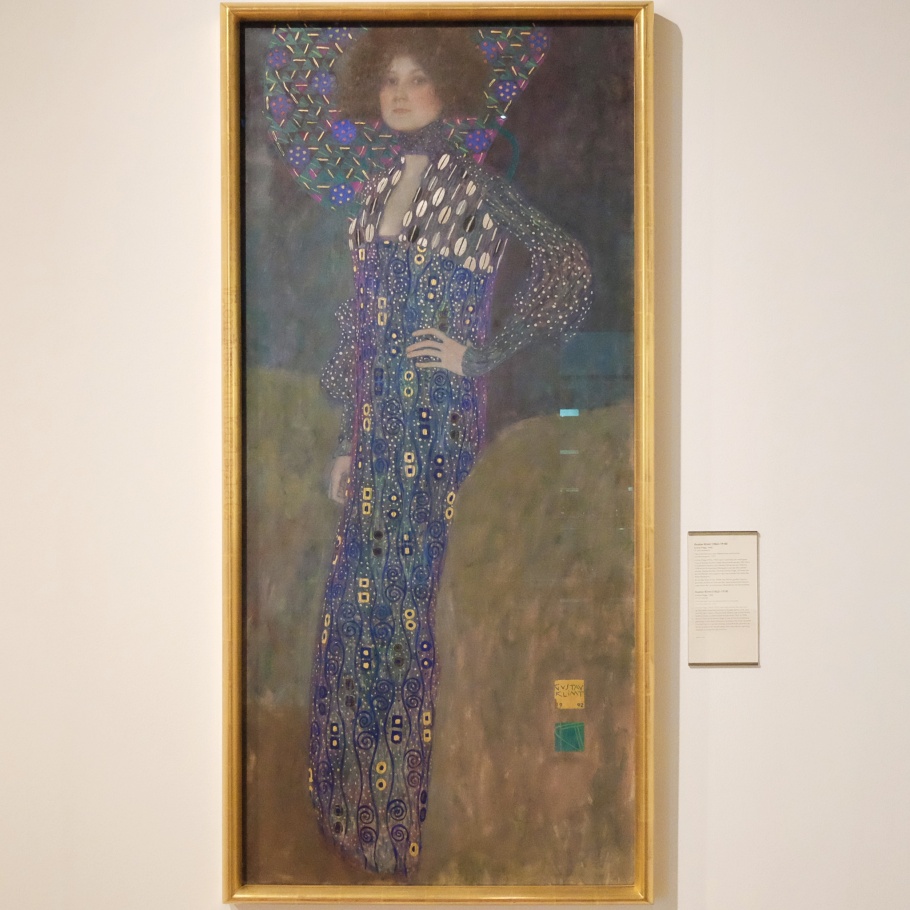 1902 portrait of Emilie Flöge who with her sisters operated a successful fashion house in Vienna and who was likely the most important woman to Klimt who remained unmarried. This portrait marked Klimt’s artistic shift from a naturalist style to ornamental abstraction. (Seen at Wien Museum Karlsplatz.) 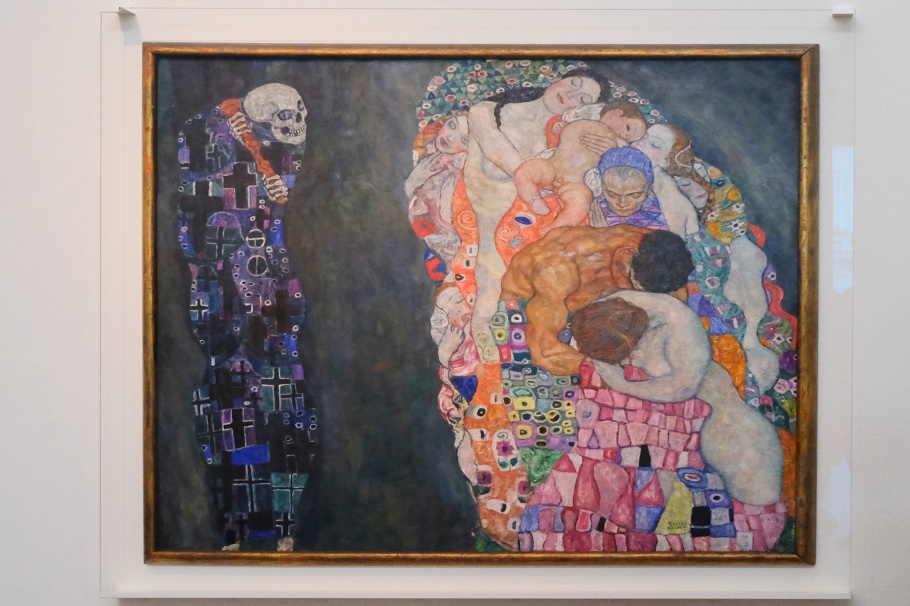 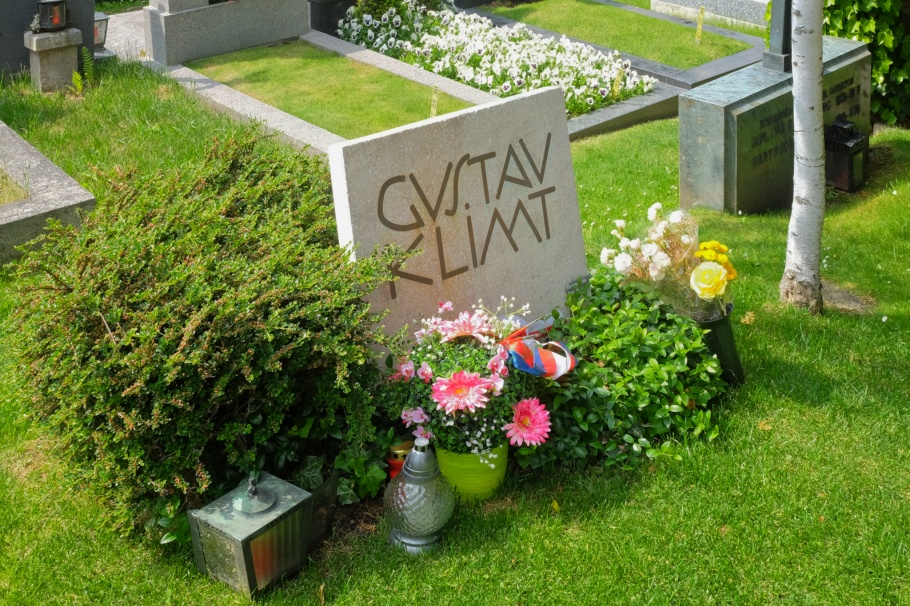 •   Expressionism, and with Egon Schiele, a leader in Vienna’s avant-garde scene.
•   1914 painting “The Bride of the Wind” (Die Windbraut, a.k.a. The Tempest): a story of lost love.
•   With his art declared “degenerate” by Nazis in 1937, he fled to England and later to Switzerland. 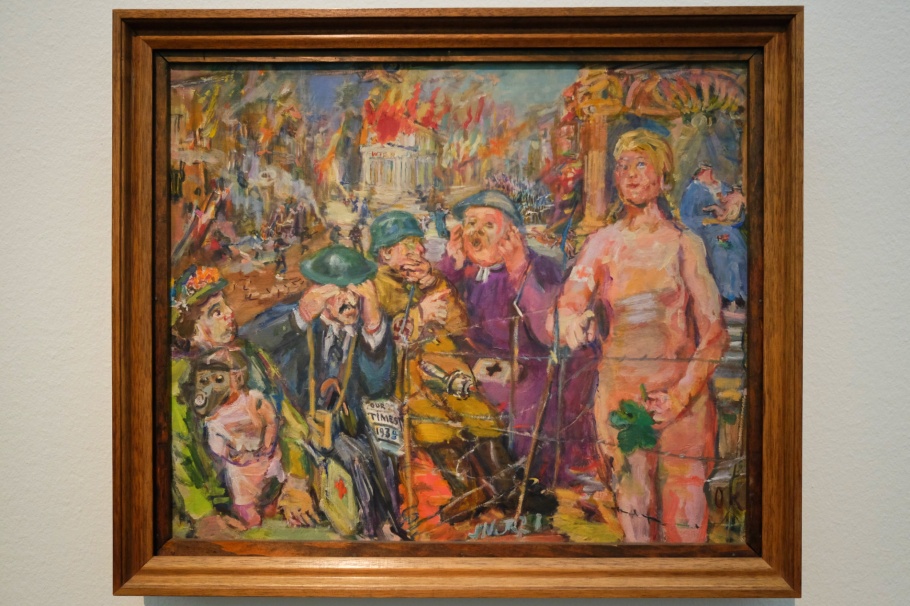 Kokoscha’s 1942 painting “Anschluss: Alice im Wunderland” (Annexation: Alice in Wonderland) is a scathing commentary of the Allies’ early lack of response to Nazi aggression. With Vienna burning in the background, naked Alice points her finger directly at the viewer. (Seen at Leopold Museum.) 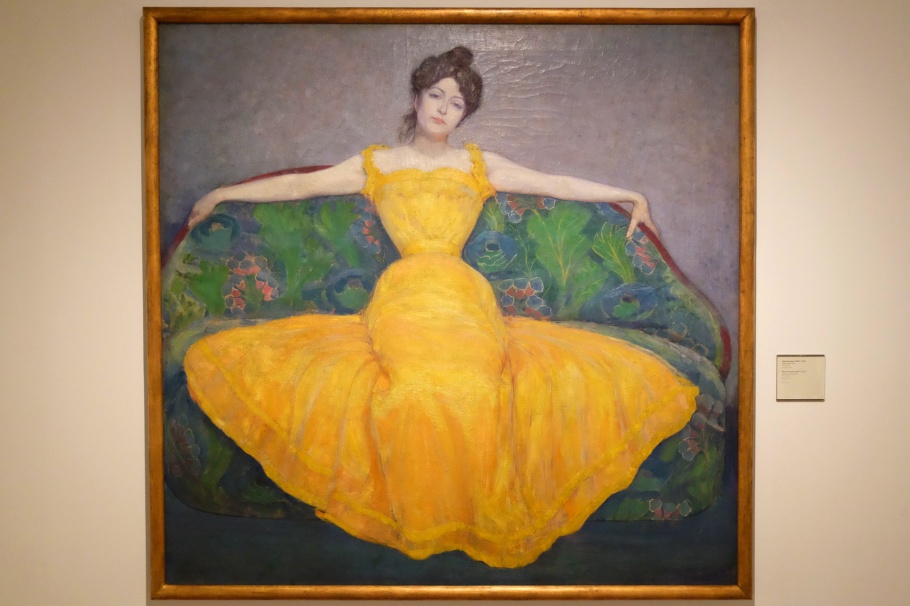 This is Kurzweil’s 1899 painting “Dame in Gelb” (Woman in yellow). The painting upon first showing was considered provocative to many and obscene to others. Along with the bold blazing yellow, I love the confident defiant gaze directed at the viewer. (Seen at Wien Museum Karlsplatz.)

•   Believed art autonomous from architecture, that art be removed from the production of functional buildings and household items.
•   Loos was impressed by Wagner’s genius, but Loos was also critical of ornate designs espoused by Wagner and Hoffmann.
•   Loos stripped architecture of ornamentation to leave behind only a pure form of functionality, as he became convinced ornamentation was a trend of the times, and that a building’s aesthetic would subsequently erode with time. Loos’ followers would include Margarete Schütte-Lihotzky, whose design of the 1926 Frankfurt kitchen led directly to the modern kitchen, and Bernard Rudofsky, whose time as curator at New York’s Museum of Modern Art gave strong voice to design in North America. 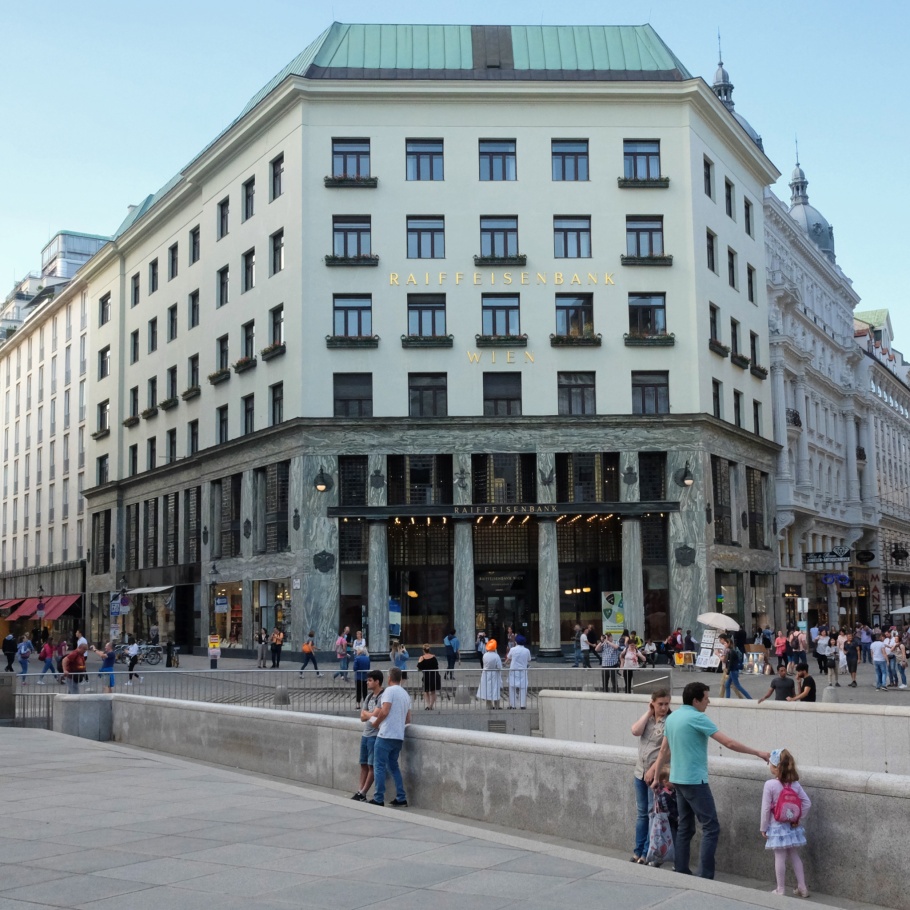 Opposite the Hofburg at Michaelerplatz is the Looshaus (Loos House, 1909-1911). Known as “the house without eyebrows”, the building’s design with marble-clad exterior walls and lack of ornamentation around the exterior windows openly rejected both historicism and Secession’s flowery decorative elements, shocked the public, and enraged Austrian emperor Franz Josef because Loos’ building was directly opposite the emperor’s classic Hofburg imperial palace. 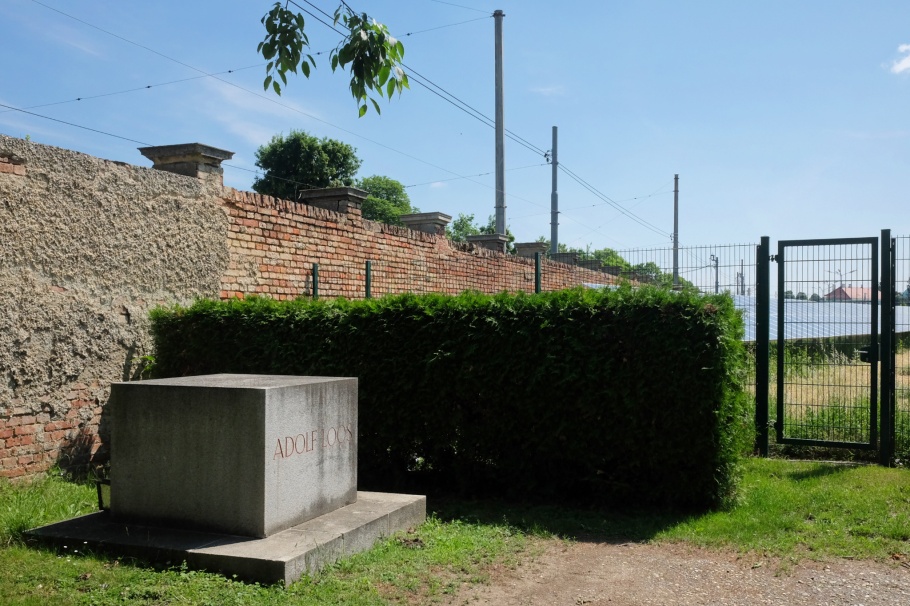 Grave for Adolf Loos: Wien Zentralfriedhof. The site is inside the wall separating the cemetery from Simmeringer Hauptstrasse; specifically, the grave is east from the main entrance at 2. Tor (Gate 2), and just west from the fenced-off field of solar panels.

•   Secession co-founder, 1897.
•   Departed Secession due to creative differences, 1905.
•   Reputation tarnished by his ardent support for National Socialism in the 1930s; his stepdaughter Alma Mahler Gropius Werfel escaped Austria after 1938 annexation by Nazi Germany. 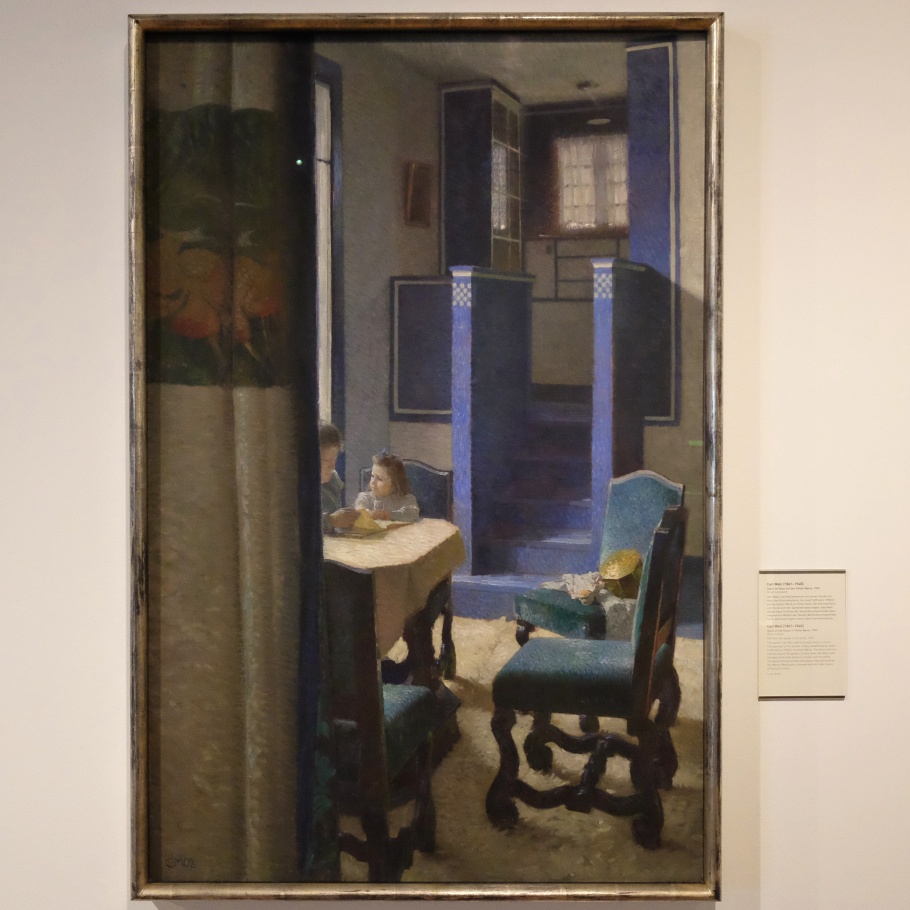 Salon im Haus auf der Hohen Warte (Large room in the house at Hohe Warte), 1903. The painting caption reads: “The painter Carl Moll and his family lived in a house that was part of the artists’ colony established by Josef Hoffmann in 1900-1901 on Hohe Warte in one of Vienna’s northern districts. The three interiors and the view of the garden terrace show that Moll had the idea of a total artwork or ‘Gesamtskunstwerk’ in mind when he furnished the house almost entirely with pieces made by the Wiener Werkstätte along with older pieces of family furniture.” (Seen at Wien Museum Karlsplatz.) 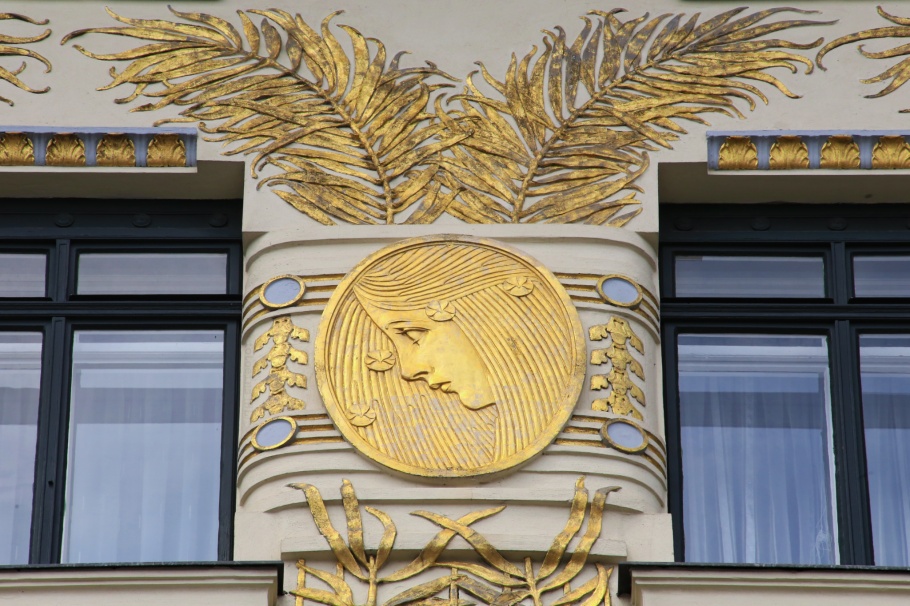 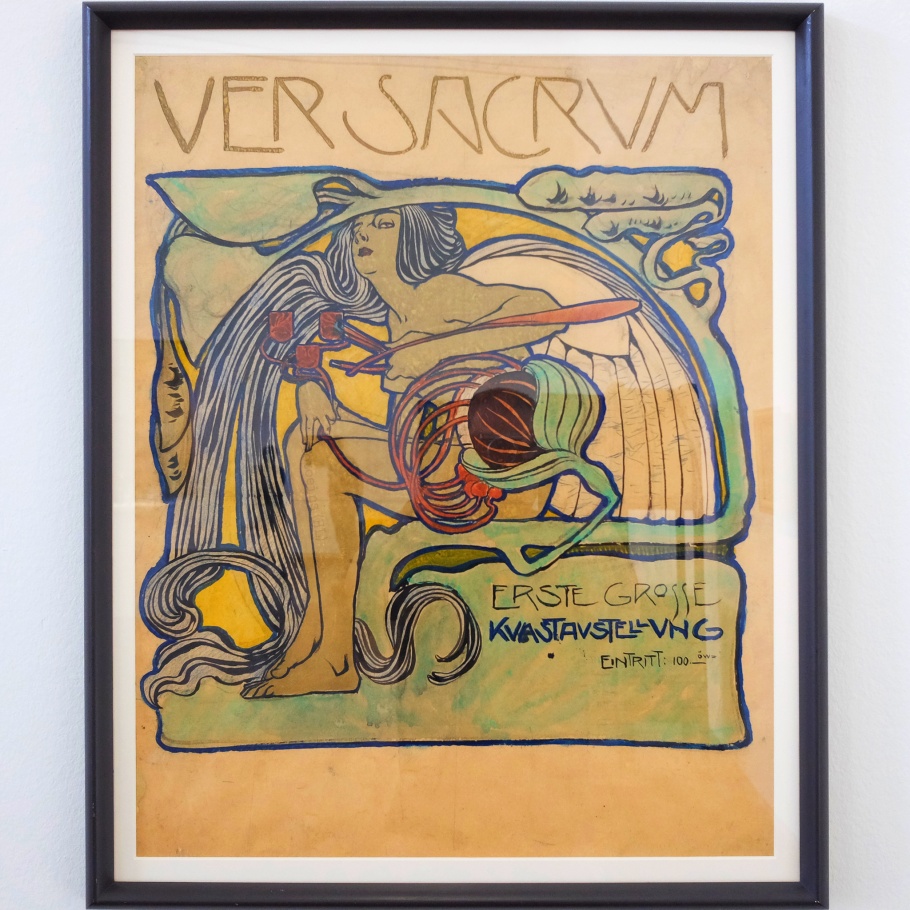 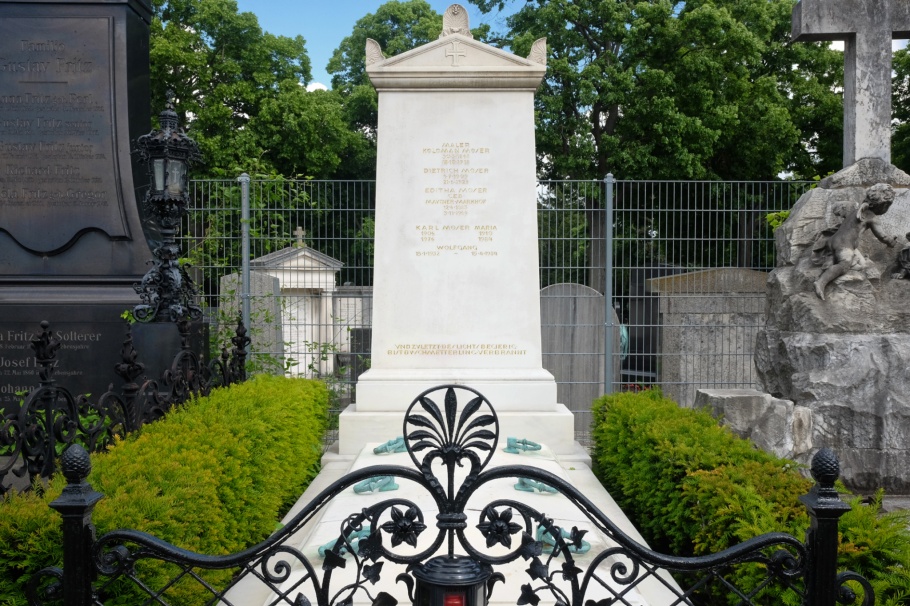 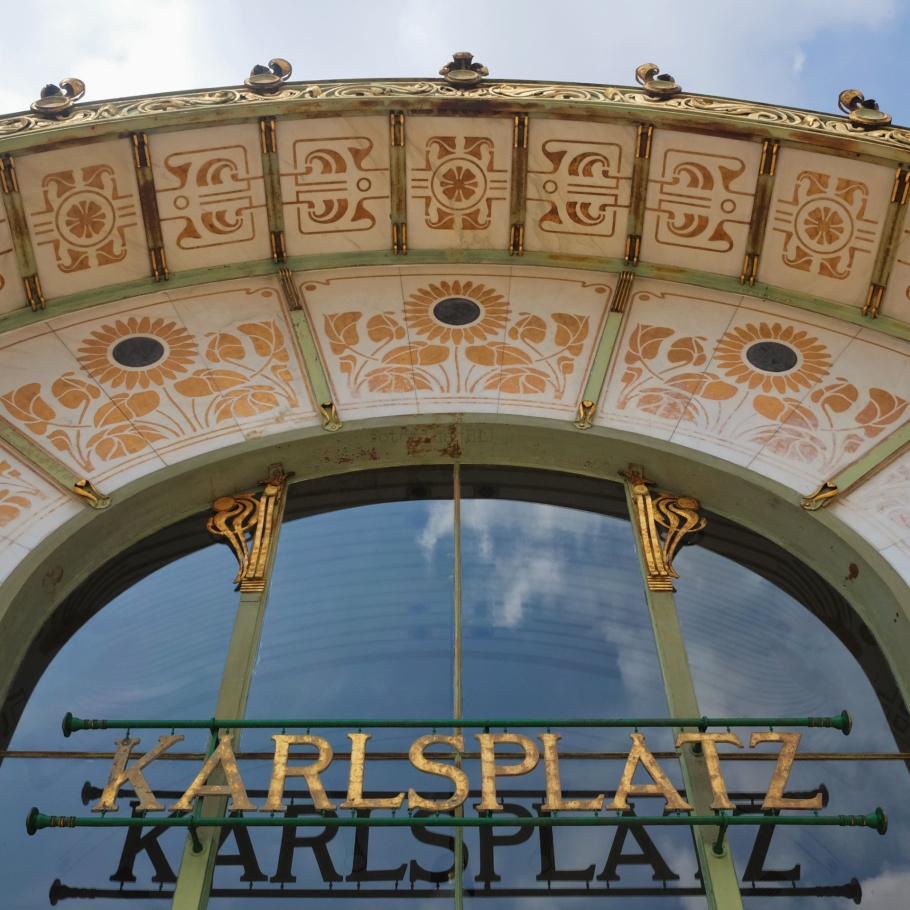 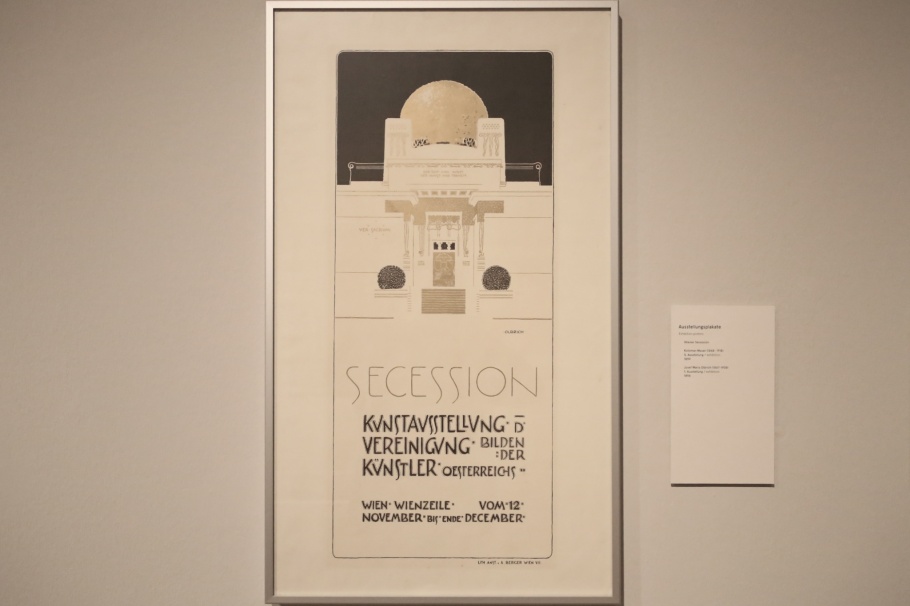 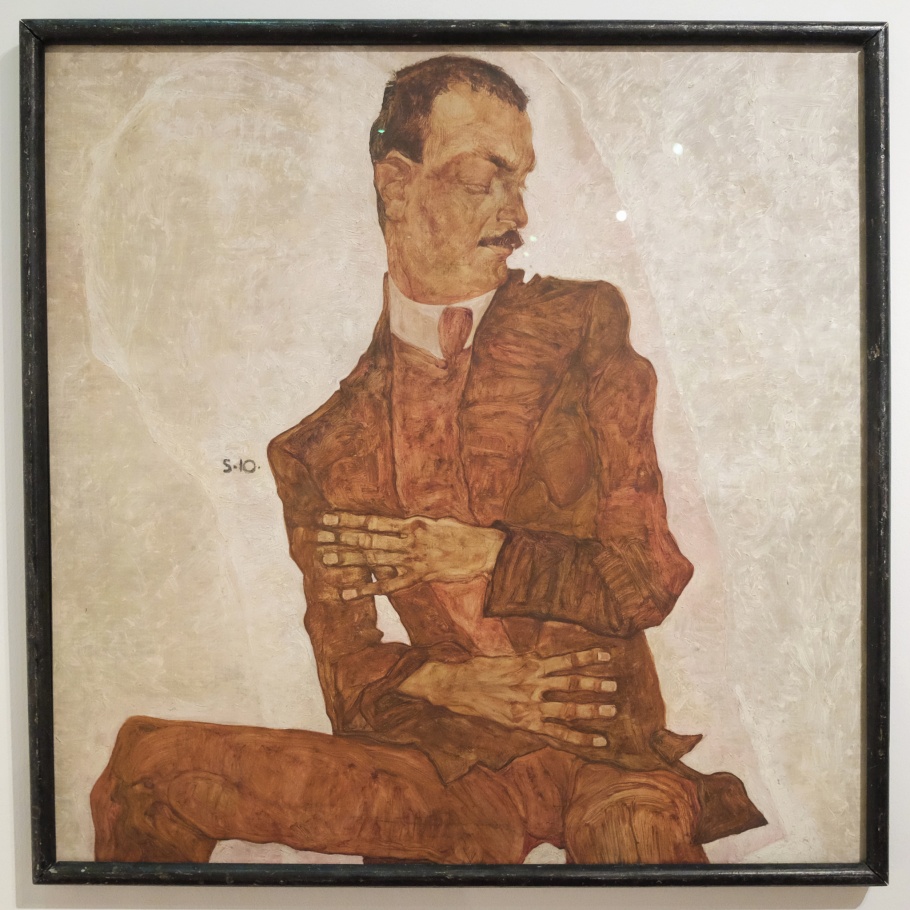 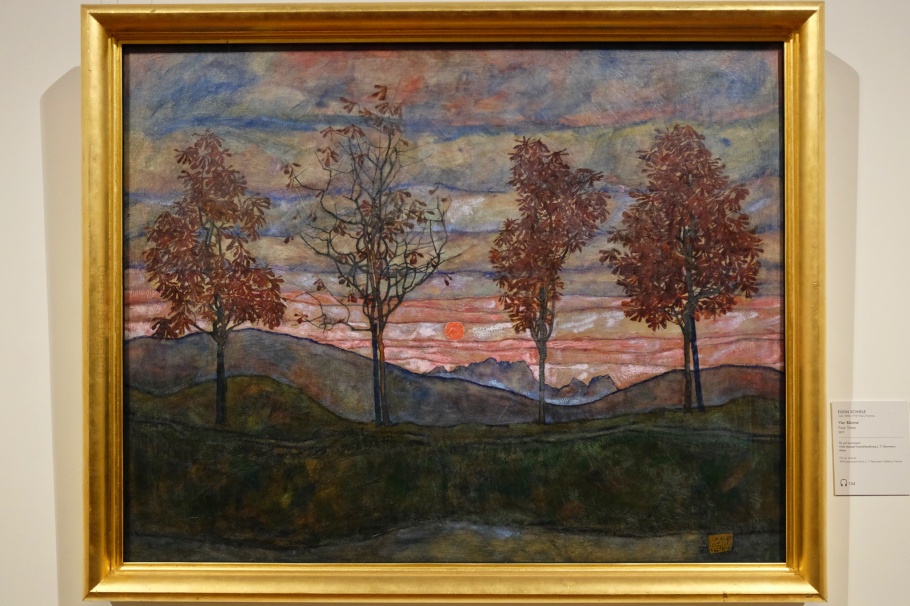 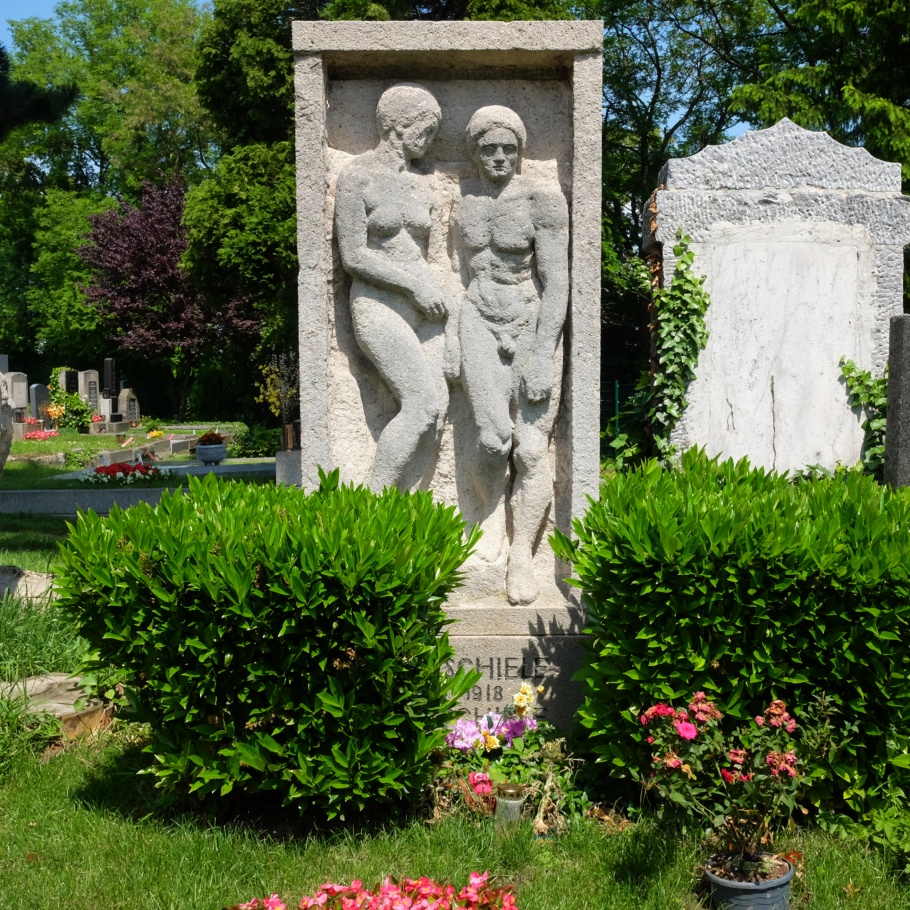 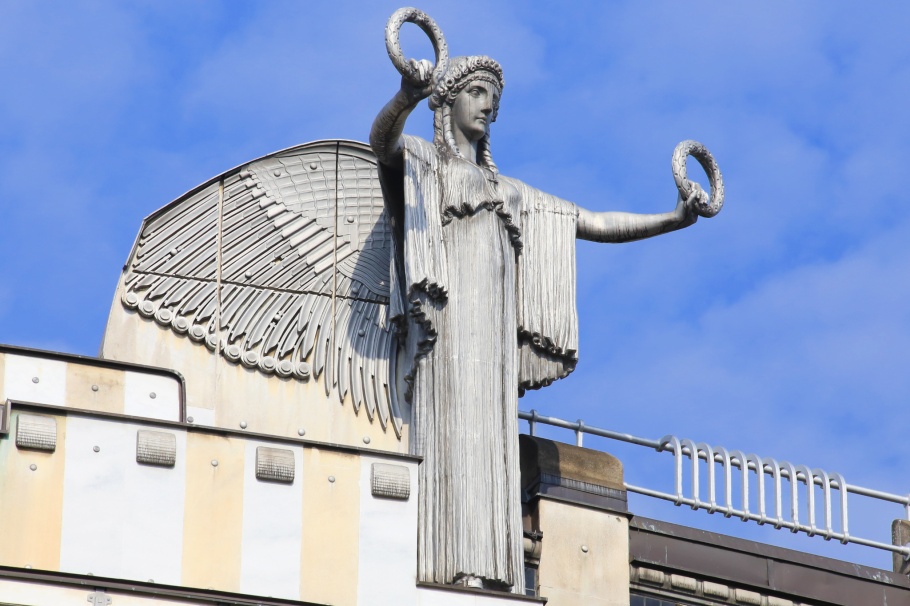 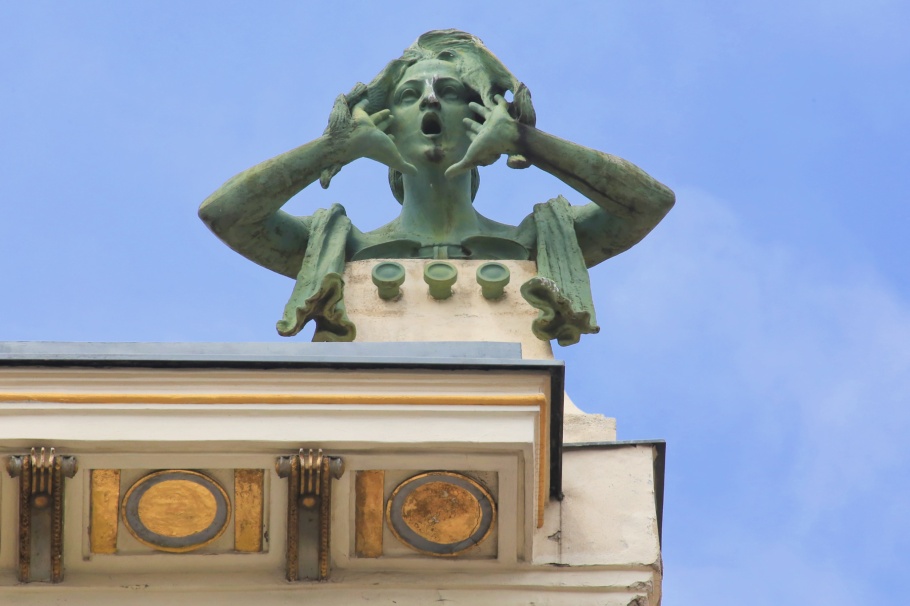 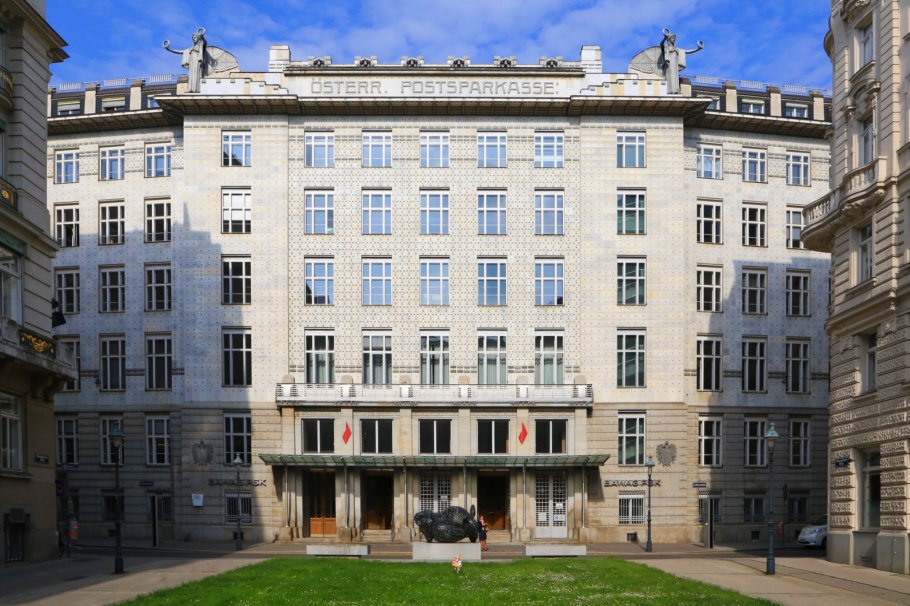 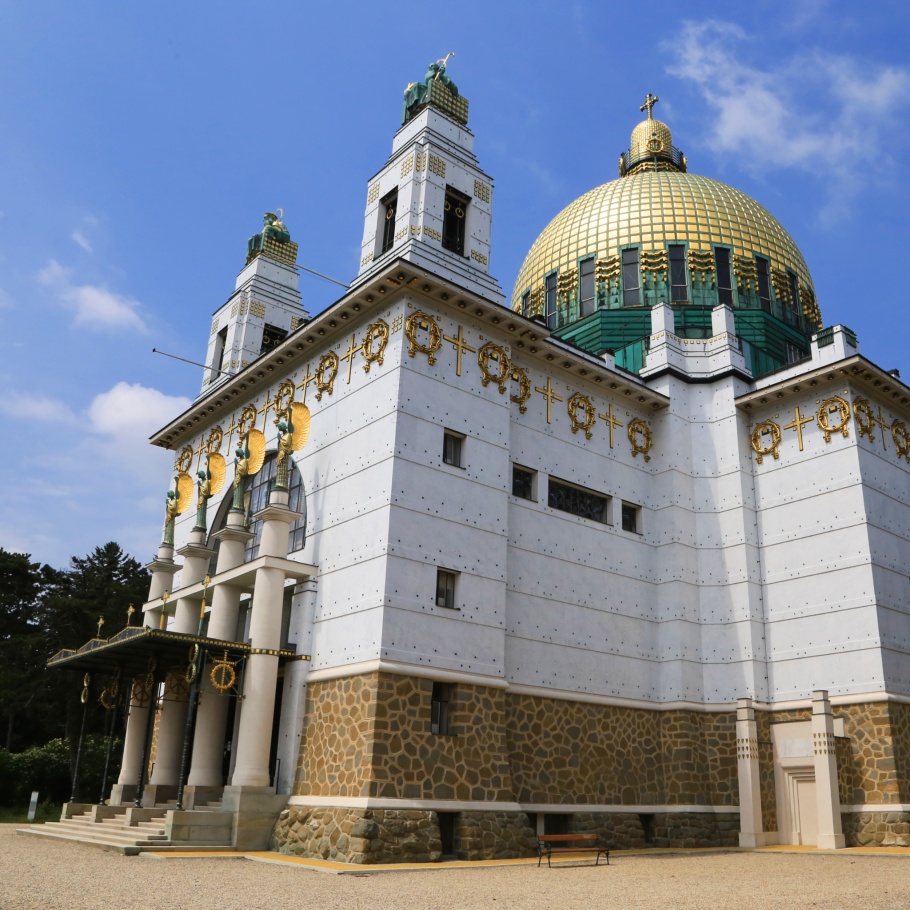 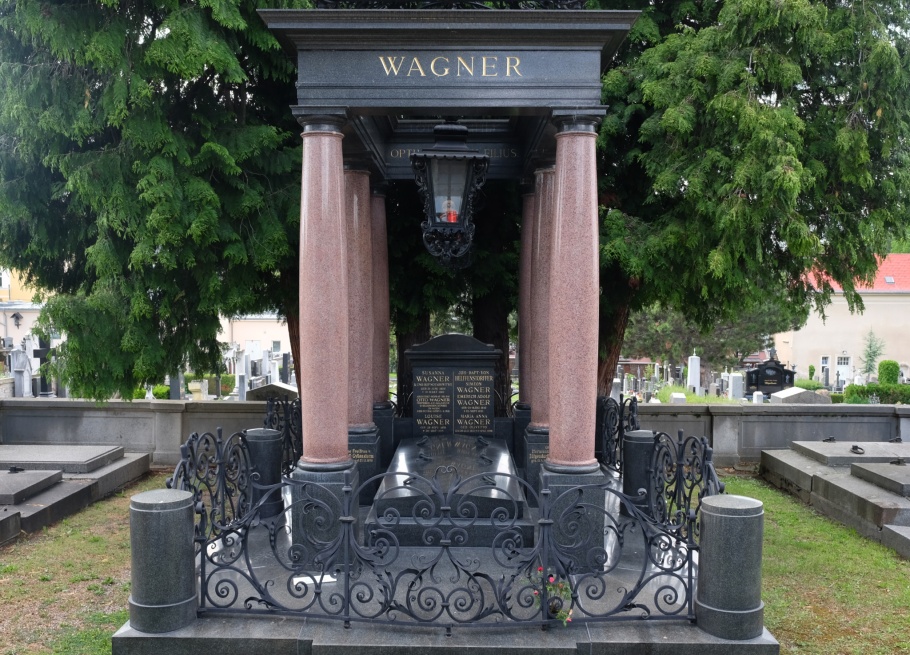 1 Although the Wiener Werkstätte closed in 1932, the group’s key principles and influences found new homes in Germany’s Bauhaus, America’s Art Deco, and designers in Italy and Scandinavia after the Second World War. The largest collection of items produced by the Wiener Werkstätte is found in the archives of MAK Vienna.

18 Responses to “My Vienna: Disrupting Historicism with Modernism”