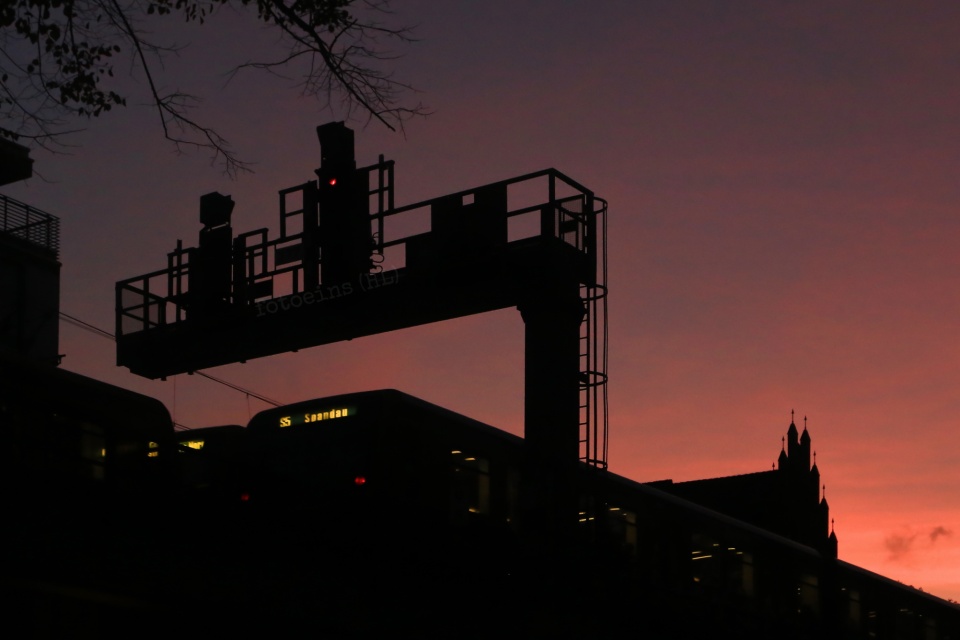 I’m at Savignyplatz watching the skies in fading afternoon light. I’m fascinated by the changing silhouettes of passing trains against the fixed silhouettes of the surrounding railway infrastructure. The elevated tracks of the east-west Stadtbahn (city rail link) are prominent here as several S-Bahn rail lines go through the area. In this image, the right-hand track is for westbound trains, as an S5 train heads outbound to Spandau*.

* As of posting (2021), the S3 and S9 S-Bahn lines traverse the Stadtbahn with their western terminus station at Spandau.

In the vicinity of Munich’s Olympic Stadium is a train station overgrown with brush and weeds. The tracks stretch north and south, but go nowhere.

Munich played host to the Summer Olympics in 1972; physical reminders include the Olympiadorf (Olympic Village), Olympiapark, and the Olympiastadion (Olympic Stadium). In 1988, the train station “München Olympiastadion” closed to train service for the final time. Rail tracks which connected the station with the North Ring freight tracks were cut, isolating the station and leaving it to decay.

END_OF_DOCUMENT_TOKEN_TO_BE_REPLACED

In the midst of the daily rush and shove, do you sometimes feel like a mindless animal on the move, and you haven’t decided whether to moo or bray? That’s what I had in mind when I saw the banner for Berlin’s Tierpark (animal park). That also depends on what commuters might be thinking if I happen to be pointing my camera in their direction.

END_OF_DOCUMENT_TOKEN_TO_BE_REPLACED

430pm in any large city generally means the afternoon rush is in full-swing. The centre of Munich is unofficially marked by the transport junction at Marienplatz for both U- and S-Bahn trains. When I come up to the underground concourse, a steady flow of people are streaming through, up, and down. That sparks an idea. Ideally, I’d like to have a neutral-density filter to cut down the light by at least a factor of two, but I have the camera stopped down enough that even a long-exposure isn’t completely burning the highlights, although hindsight tells me I could’ve turned the ISO further down. I think my experiment worked relatively well; standing around with a tripod would be far too conspicuous. 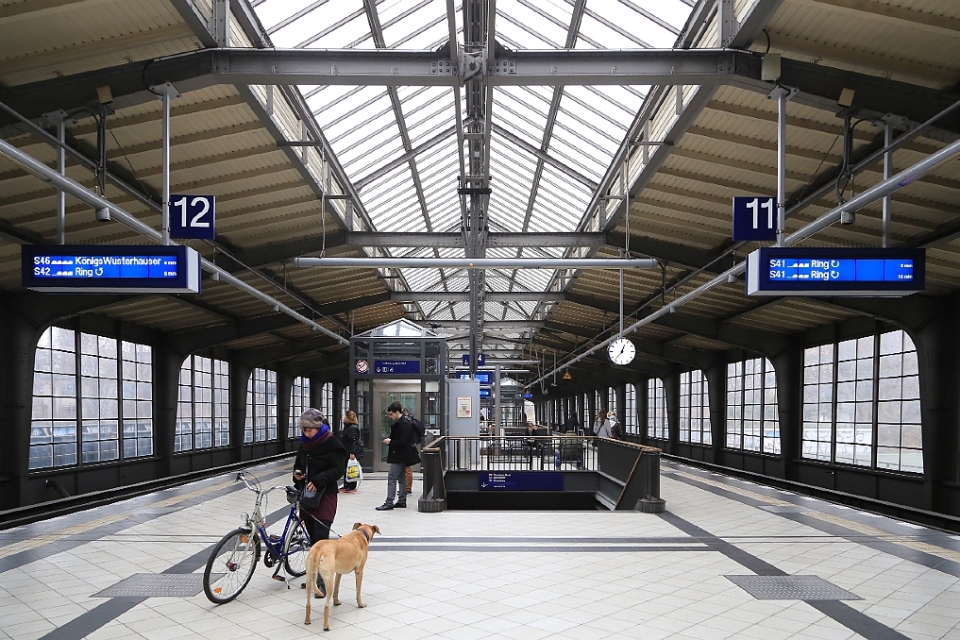 In the German capital city of Berlin, the Ringbahn is a “circle line” for S-Bahn trains. Route S41 runs clockwise and route S42 runs counterclockwise; each makes one complete circuit in 60 minutes. Additional S45, S46, and S47 routes run shorter turnarounds and/or spurs to other suburbs. Passengers are allowed to take bicycles and dogs (on leash) onto S-Bahn trains. In Berlin’s Westend, Westkreuz is the “west junction,” and the station serves as the intersection of Ringbahn trains with east-west S5 and S7 trains. The outline of the Ringbahn around Berlin looks like a dog’s head; naturally, some Berliners refer to the Ringbahn as the “Hundekopf” (rbb, in German). Westkreuz station would be between the dog’s nose and mouth.

I made the photo above on 7 December 2015 with the Canon EOS6D camera, 24-105 L zoom-lens, and the following settings: 1/160s, f/5, ISO2000, 24mm focal length. The map of the Ringbahn is by Wiki user CellarDoor85 (Robert Aehnelt), from the German Berliner Ringbahn wiki page. This post appears on Fotoeins Fotopress at fotoeins.com as http://wp.me/p1BIdT-7K4. 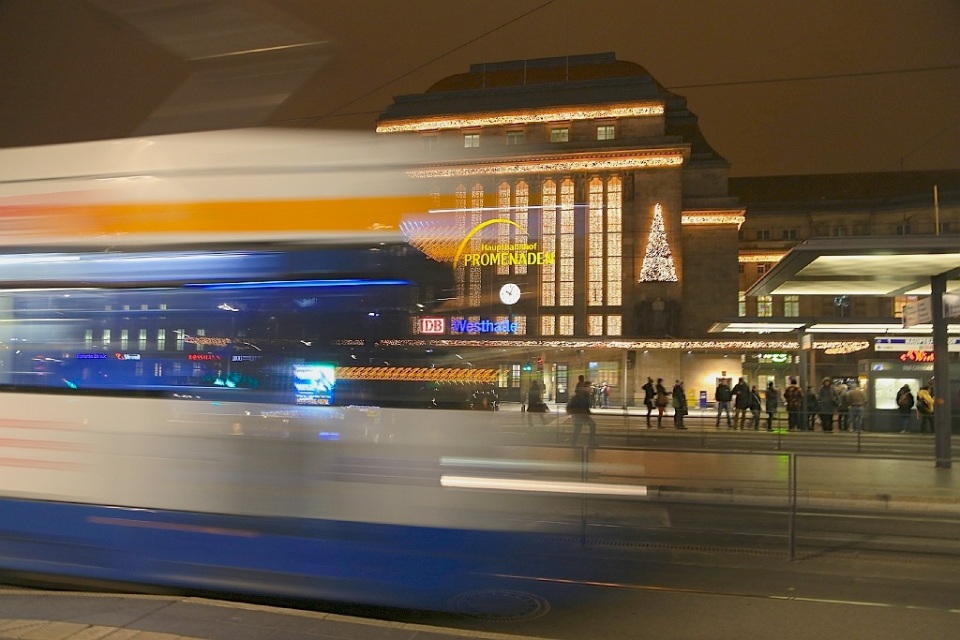 Inspired by a similar photograph in a hotel room, I’m at Willy-Brandt-Platz at the bus- and tram-stop in front of the Westhalle at Leipzig Hauptbahnhof (Central Station). I’m deliberate in experimenting with photographs made over a variation in settings. What I like is the tram moving into the frame from the left, the light stripes parallel to the lines of the building in the background, and leading to the waiting crowds at the right. And the Christmas consumer streak continues …

Thanks to Leipzig Tourismus und Marketing GmbH (LTM) and InterCityHotel Leipzig for their kind hospitality. Access to public transport was kindly provided by LTM and the MDV Mitteldeutscher Verkehrsverbund regional transport authority. I made the photo above on 2 December 2014 with the Canon 6D, EF 24-105 zoom-lens, and the following settings: 1/4s, f/4, ISO640, 28mm focal length. This post appears on Fotoeins Fotopress at fotoeins.com as http://wp.me/p1BIdT-6jv.

From the top of the stairs near street level, this is the view down into the station at Wilhelm-Leuschner-Platz, one of four stations in the Leipzig City Tunnel through which trains from the S-Bahn Mitteldeutschland network traverse through Leipzig and the surrounding region. For its role as one of the venues during 1989’s East German Peaceful Revolution, the square at street level by the name of Wilhelm-Leuschner-Platz is also called Platz der Friedlichen Revolution (Peaceful Revolution Square).

My thanks to Leipzig Tourismus und Marketing GmbH (LTM), InterCityHotel Leipzig, and the MDV Mitteldeutscher Verkehrsverbund regional transport authority. I made the photo above on 4 December 2014 with the Canon 6D, 24-105 zoom-lens, and the following settings: 1/25s, f/8, ISO5000, 24mm focal length. This post appears on Fotoeins Fotopress at fotoeins.com as http://wp.me/p1BIdT-6vn.

As one of the largest infrastructure projects ever undertaken in the state of Saxony, the City Tunnel created four new underground stations in the city of Leipzig: Hauptbahnhof, Markt, Wilhelm-Leuschner-Platz, and Bayerischer Bahnhof. These form the new backbone for the new S-Bahn Mitteldeutschland train network which began operation in December 2013. Here, an S-Bahn train is pictured departing the station, leaving behind a blurry trail in front of a well-defined stripe of blue.

I made the photo above on 4 December 2014 with the Canon 6D camera and EF 24-105 L-lens with the following settings: 1/4s, f/8, ISO640, 24mm focal length. Leipzig Tourismus und Marketing GmbH kindly hosted my two-day visit to Leipzig. This post appears on Fotoeins Fotopress at fotoeins.com as http://wp.me/p1BIdT-6si.

Train stations on Christmas Eve are emptier than usual and an unlikely place to visit. But I’ve always viewed the timing as a unique photographic opportunity.

I was in Berlin on Christmas Eve 2010, and with the city already covered in snow, I set out into the evening under additional heavy snowfall. I wanted to photograph the quiet conditions in the capital city, and I stopped at Potsdamer Platz station, normally a busy transfer station in the Mitte (or central) district.

My spontaneous visit and photographs resulted in something more profound.