In the vicinity of Munich’s Olympic Stadium is a train station overgrown with brush and weeds. The tracks stretch north and south, but go nowhere.

Munich played host to the Summer Olympics in 1972; physical reminders include the Olympiadorf (Olympic Village), Olympiapark, and the Olympiastadion (Olympic Stadium). In 1988, the train station “München Olympiastadion” closed to train service for the final time. Rail tracks which connected the station with the North Ring freight tracks were cut, isolating the station and leaving it to decay. 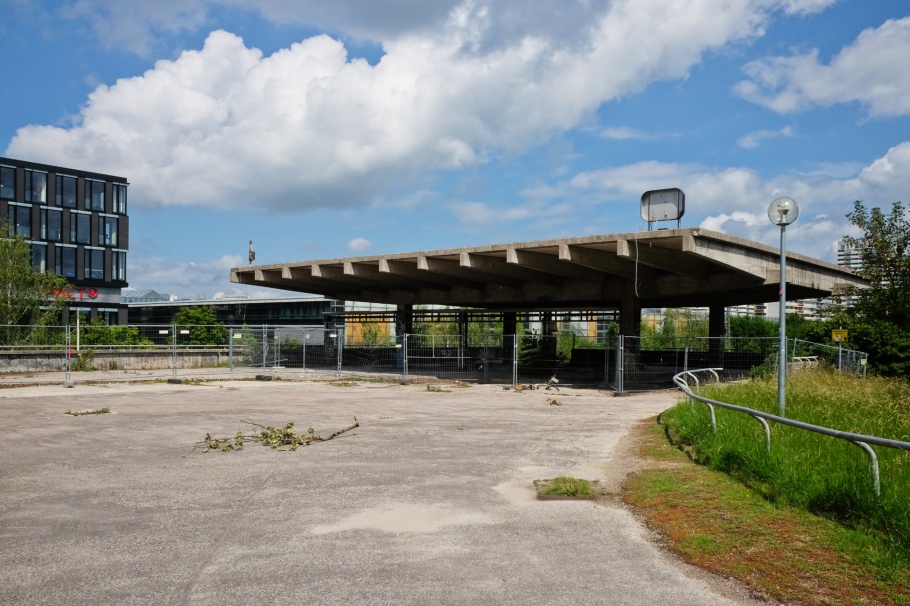 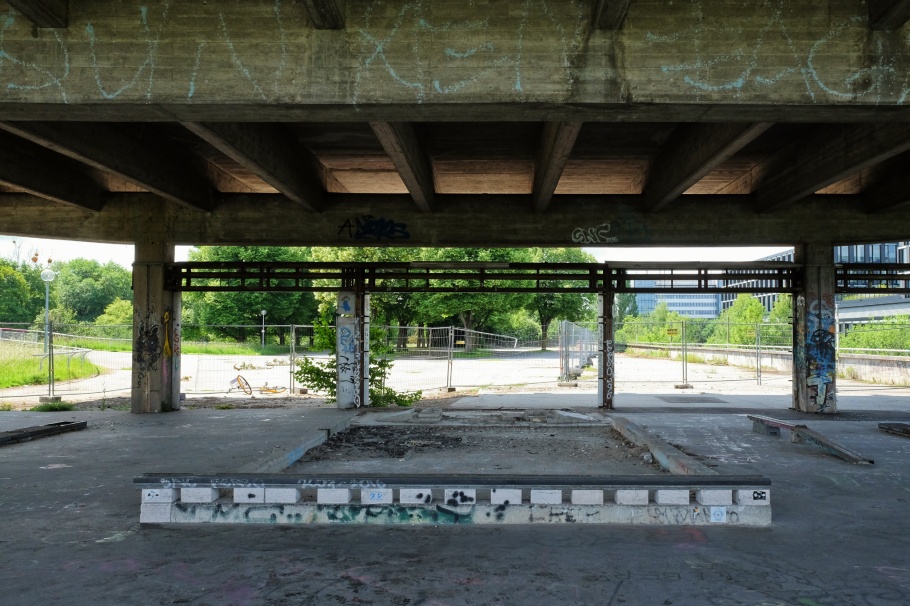 Upper concourse; square block in the cement was likely once a kiosk or shop (HL). 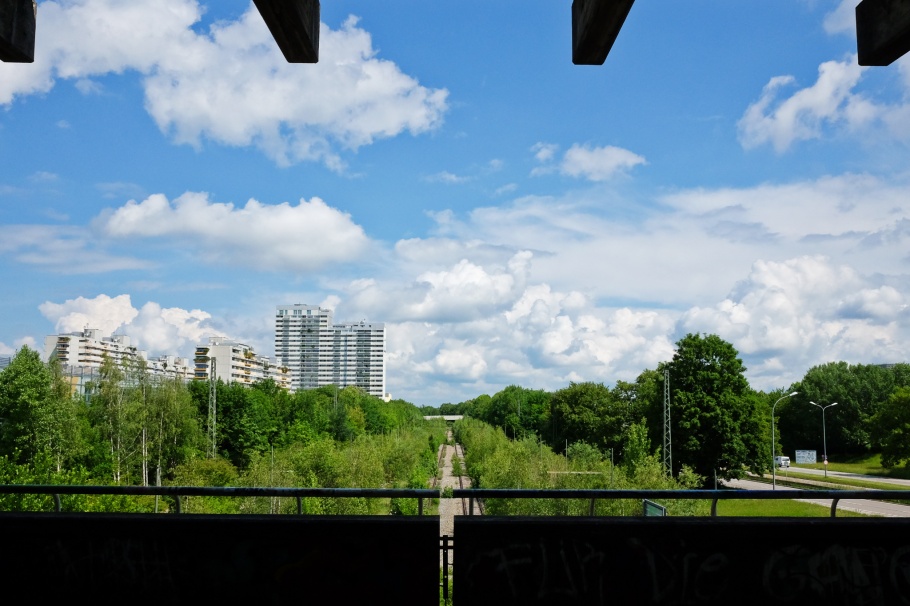 Recent (2018): facing north towards the towers in the Pressestadt at upper-centre (HL). 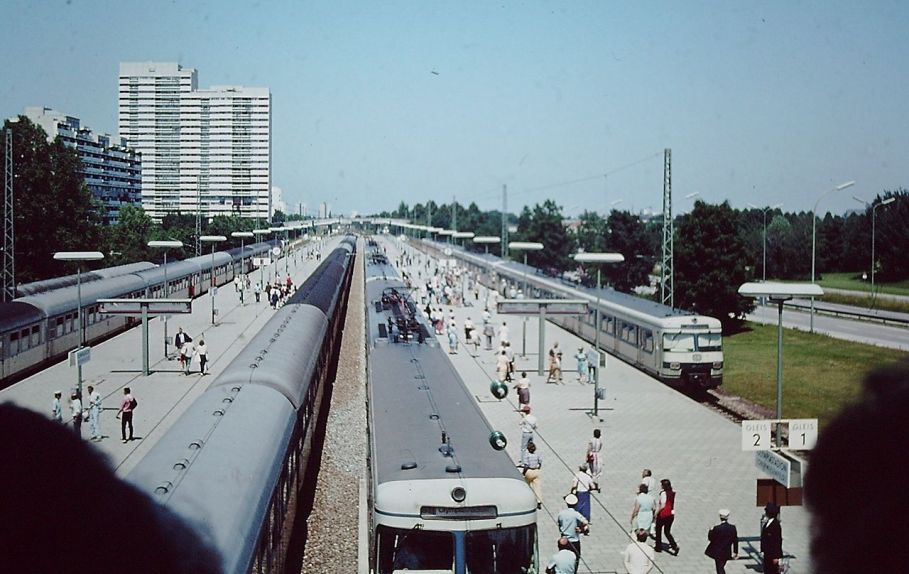 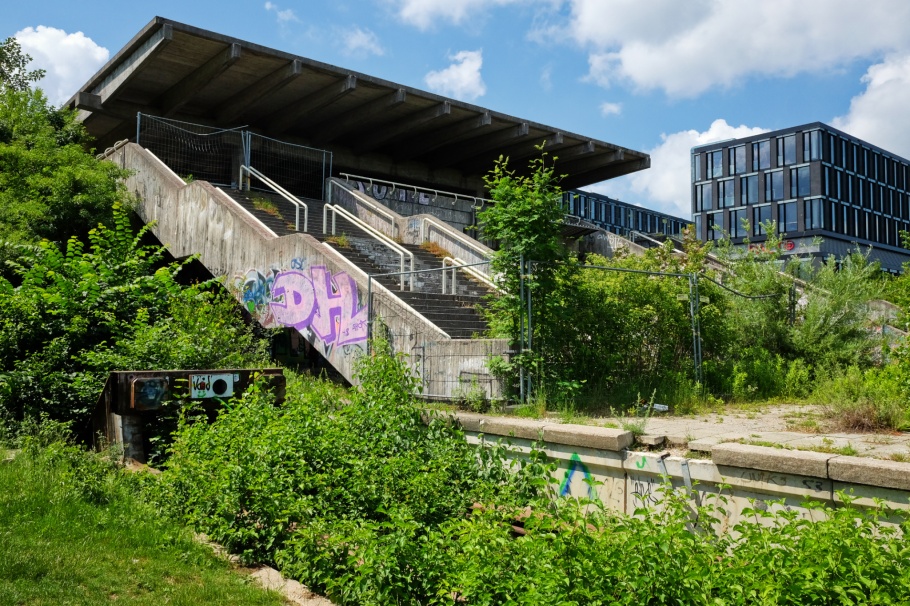 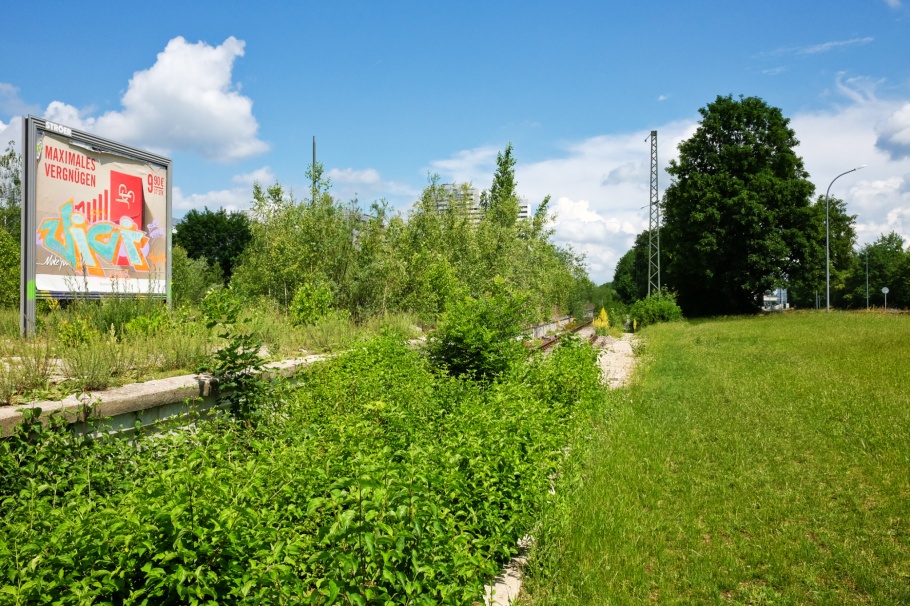 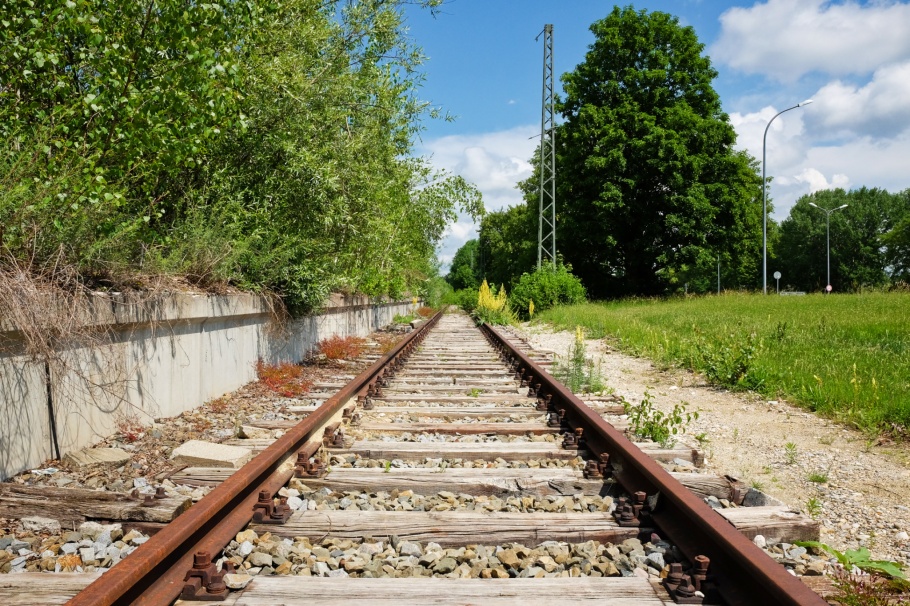 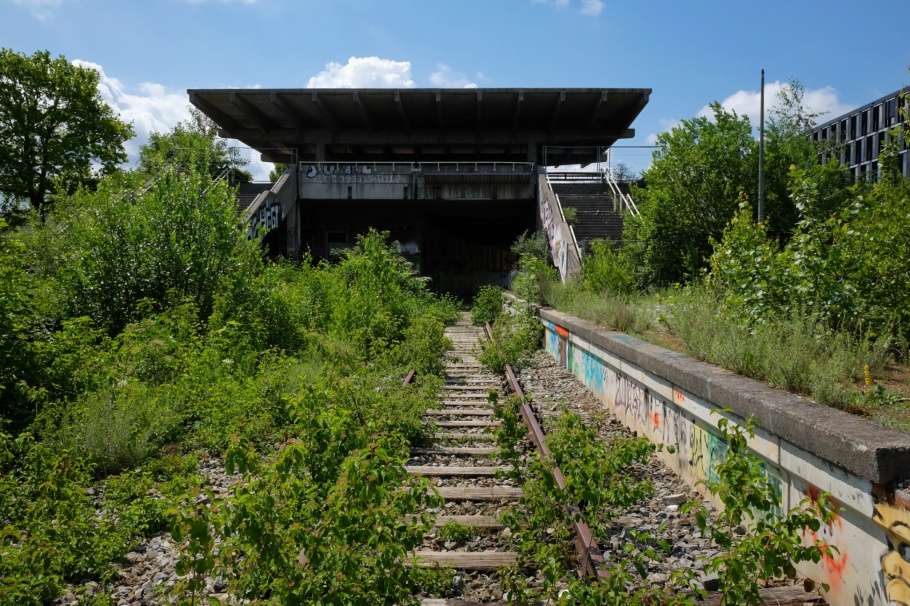 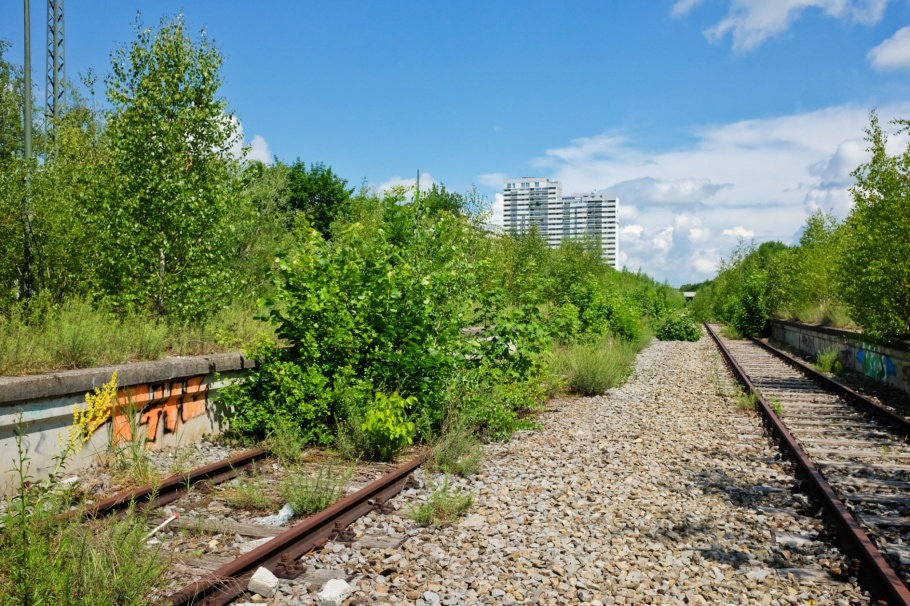 Tracks 2 and 3, overgrown: facing north towards the Pressestadt towers (HL). 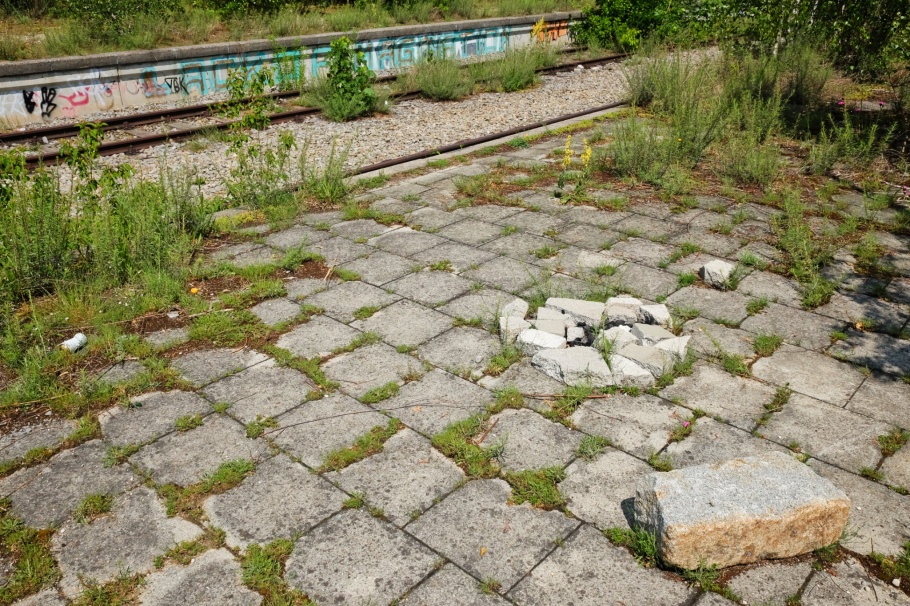 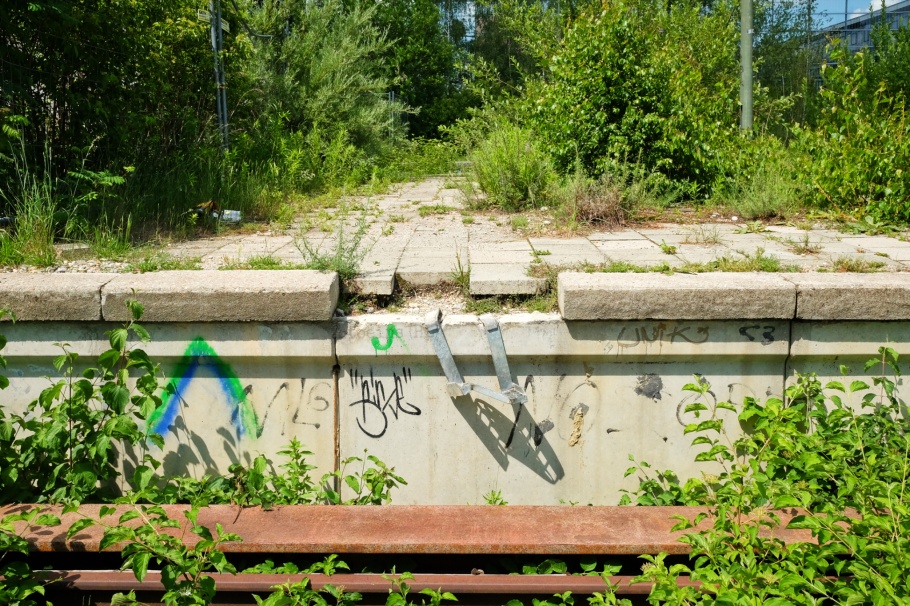 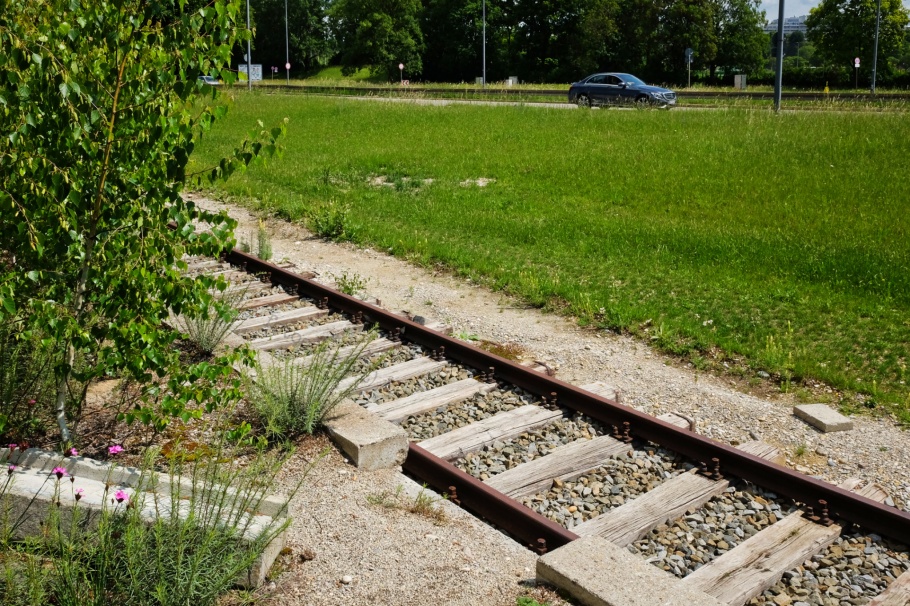 Münchner Nordring (Munich North Ring) mostly freight; I’ve highlighted with a bright purple filled circle the location of the former Olympiastadion station and its former connection with the Nordring. Map by Pechristener on Wiki (CC-BY-SA 2.0). 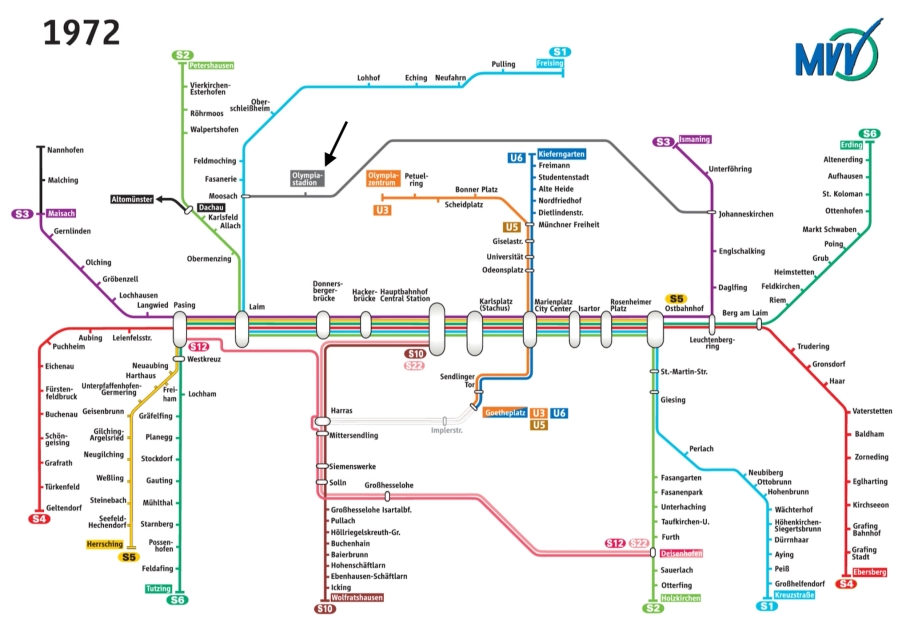 Munich rapid transit system map from 1972. The arrow points to the location of station Olympiastadion, connected as an express link to Moosach in the west and Johanneskirchen in the east (2. Stammstrecke München). 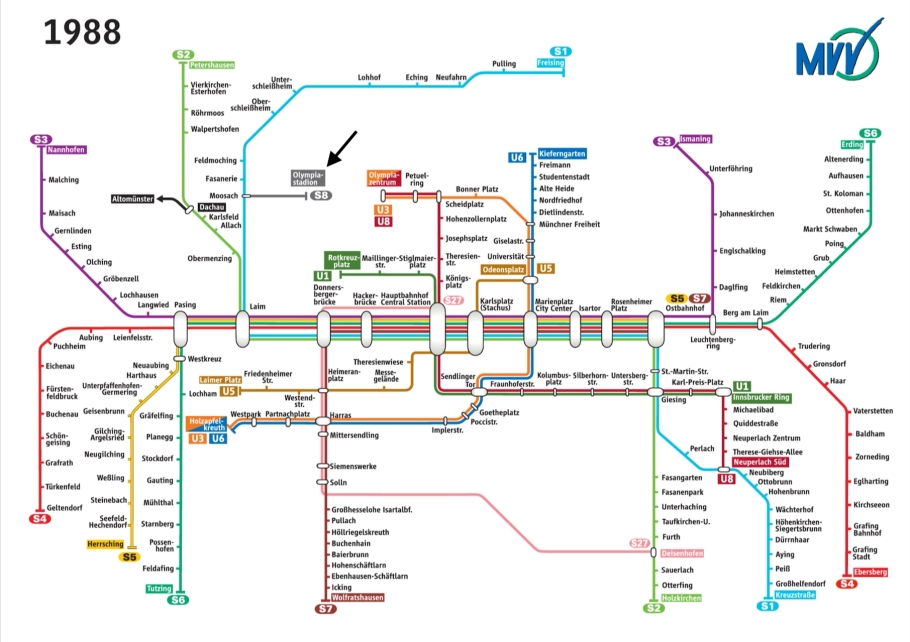 Munich rapid transit system map from 1988. The arrow points to the location of station Olympiastadion, connected merely as a spur in the station’s final year of operation (2. Stammstrecke München).

Take the U1 or U7 U-Bahn to Georg-Brauchle-Ring station; enjoy the station interior before heading up to street-level. Walk east on the pedestrian path along Georg-Brauchle-Ring in the direction of the O2 Telefónica tower. Go past the tower towards the overpass (road B304). Staying on the path, the road turns gently left/north at the overpass; walk up the sloped ramp to the ghost station. After safely navigating around and walking about the ruins, the pedestrian bridge directly across from the station takes you over the busy road Bundesstrasse 304, and east into Olympic Park, Olympic Stadium, and memorials marking the 1972 Massacre.

I made all images labelled “(HL)” above on 2 June 2018 with a Fujifilm X70 fixed-lens prime. This post appears on Fotoeins Fotografie at fotoeins DOT com as https://wp.me/p1BIdT-cnH.