I’m among men and women, young and old, swimming in a sea of red and white, and surrounded by full-volume chanting. Not only is it a big deal to procure a “Stehplatz” (standing spot) for under €20, but to be present in the stadium’s standing-only terraces is a big thrill. The terraces are present in German football stadia but banned in England (for historical reasons). I’m convinced I’m going to memorize their famous fan anthem as quickly as possible.

Founded on 13 February 1948, the football (soccer) team 1. FC Köln plays out of the Müngersdorfer Stadion, known also as the sponsored Rhein-Energie-Stadion (Rhine Energy Stadium) in Cologne. The stadium’s maximum capacity is about fifty-thousand, and the football side regularly sells out their home matches. The team’s mascot is a billy goat (Geissbock) for its steadfast stubborn perseverance; the team’s nickname is The Billy Goats. I’m also convinced there’s another “Kölle” verbal pun. “Geist-bock” is a compound noun consisting of “Geist” for (team-, fan-) spirit, and “Bock” for the people’s stubborn steadfast support. Various generations of “Hennes”, the mascot goat, have appeared on the sideline for home matches, and the mascot is prominent in the team badge’s and familiar red-and-white home kit (jersey).

The English version of the Bundesliga website highlights the team, reminding us they were the first ever champions of the newly established Bundesliga for the 1963-1964 season. 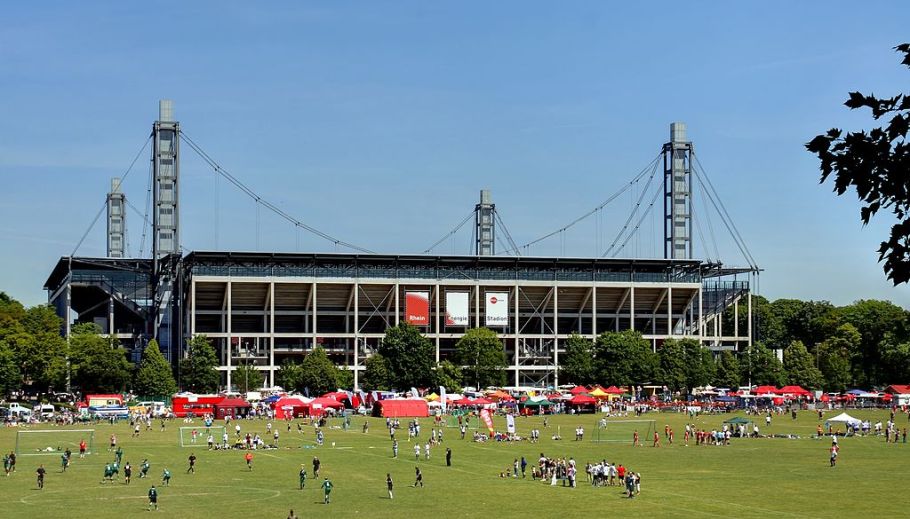