The Grand Canyon National Park has very different timescales: over 100 years of human inscription as a national park, but over 1 billion years of geologic history.

European colonizers and settlers recognized protection was required for the big dramatic landscape. On 26 February 1919, U.S. Congress passed legislation “An Act to Establish the Grand Canyon National Park in the State of Arizona” which was signed by President Woodrow Wilson. With its official designation, the country’s 15th National Park encompasses over 1-million acres (almost 405-thousand hectares) in surface area and several thousand years of history of human habitation by indigenous peoples, including the Havasupai, Hualapai, Hopi, Navajo, Paiute, and the Zuni, who consider the Grand Canyon as their ancestral birthplace. UNESCO inscribed the Grand Canyon National Park as World Heritage Site in 1979.

We spent three days in October 2018 exploring parts of the Grand Canyon National Park. After our drive from Flagstaff to Vermilion Cliffs, we pushed forward to the North Rim and the winding scenic drive took us to Point Imperial and Cape Royal in time for the day’s final illumination. With a night spent at the beautifully serene Cliff Dwellers Lodge, we retraced our drive back to Cameron, then turning west to Desert View and parts of the eastern end of the South Rim. With our new ‘base’ established in Flagstaff, we drove the following day to the main entrance of the Grand Canyon National Park (via Valle and Tusayan), and we spent the day in the western and central parts of the South Rim. The 1126 km (700 mi)# we covered over the three days was 22 percent of the entire 5049 km (3138 mi) we accumulated through parts of New Mexico and Arizona.

END_OF_DOCUMENT_TOKEN_TO_BE_REPLACED

I begin 2019 with glimpses from the road over two weeks this past autumn in the American Southwest.

Driving east on US route 60, extinct cinder cones begin to pop up on the landscape in an area known as the Springerville Volcano Field containing over 400 cones and volcanic activity with ages between 3 million years and about 300-thousand years ago. The volcano field is situated between Show Low, AZ and Springerville, AZ; is one of the largest volcanic fields on the Colorado Plateau; and is the youngest volcanic fields in the United States. The cinder cone shown above at right is Cerro Quemado.

I made the picture above on 19 October 2018 with a Fujifilm X70 fixed-lens prime and the settings: 1/1000-sec, f/11, ISO1000, and 18.5mm focal length (28mm full-frame equivalent). Thanks to AB for making this memorable trip possible. This post appears on Fotoeins Fotografie at fotoeins DOT com as https://wp.me/p1BIdT-cBQ.

I begin 2019 with glimpses from the road over two weeks this past autumn in the American Southwest.

On US route 89A just east of Navajo Bridge are market stands along the side of the highway. Some were occupied with wares for sale; others were empty and abandoned (for the season). An “ageless superposition” against the backdrop of the towering Vermilion Cliffs seemed like a good idea at the time. But time itself seems unimportant because we’re standing on lands of the Navajo Nation.

I made the picture above on 13 October 2018 with a Fujifilm X70 fixed-lens prime and the settings: 1/1000-sec, f/13, ISO1000, and 18.5mm focal length (28mm full-frame equivalent). Thanks to AB for making this memorable trip possible. This post appears on Fotoeins Fotografie at fotoeins.com as https://wp.me/p1BIdT-cC3.

Our time in the American Southwest was much more than the extensive drives, more than the 3100 miles accumulated on the road. We were eager to sample the food, and specifically, the sustained burst of heat from red and green chiles famously represented in New Mexico. The following are some of our favourite flavours with visual reasons why we were not disappointed and why we want to go back.

END_OF_DOCUMENT_TOKEN_TO_BE_REPLACED

I wrote previously about our time (in autumn 2018) driving through parts of the American Southwest where I also gave more “shutter workout” to my Fujifilm X70 compact mirrorless camera.

We’d seen an abundance and variety of colours throughout our journey, and upon return, I asked myself from what we had witnessed if there were sufficient examples to show. What follows below are sets of images from Arizona and New Mexico, with colours distributed throughout the “ROYGBIV spectrum”: Red, Orange, Yellow, Green, Blue, Indigo, Violet.

END_OF_DOCUMENT_TOKEN_TO_BE_REPLACED 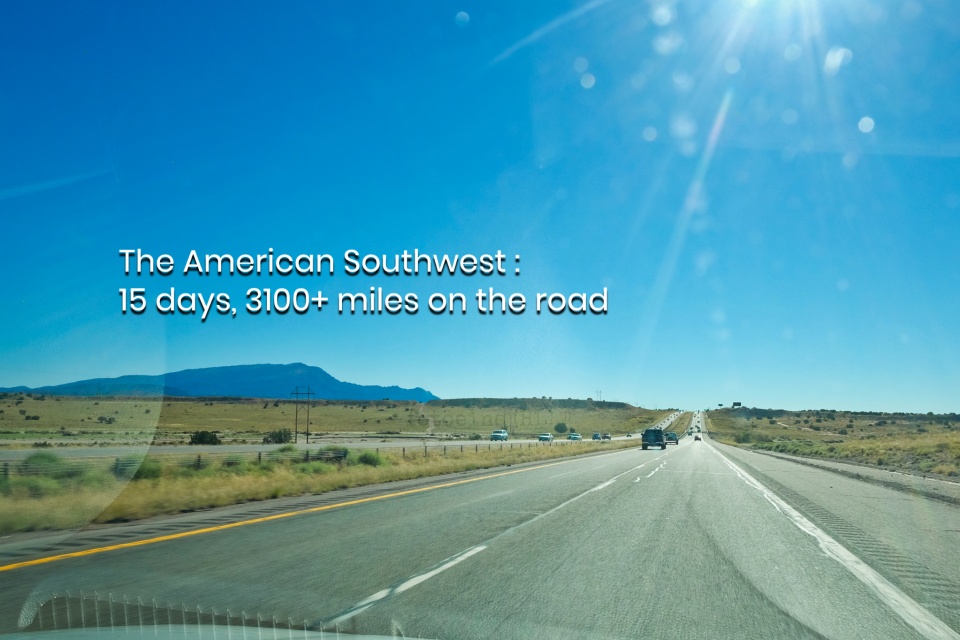 In October 2018, we embarked on a modest 2-week driving trip through parts of New Mexico and Arizona. We began in Santa Fe and Albuquerque, drove west towards Flagstaff and the Grand Canyon, south to Tucson, and finally, northeast on the return to Santa Fe. With our first-time attendance at the Balloon Fiesta and first-time visit to the Grand Canyon accomplished, we’d like to examine further the Grand Staircase geographical formation beyond the Utah-Arizona border region and the historical remnants from old highway US route 66.