After strolling the streets of Central Saigon at night, one of your experiences should include eating out. That doesn’t mean eating in the cool confines of an air-conditioned restaurant. “Eating out” means you’re on the streets, sitting on plastic stools, and surrounded by residents happily scarfing down their meal. Check out the grilled meats and seafood of all kinds, shapes, and sizes: point and choose, sit and wait, sip on a cold beer or a refreshing fruit smoothie, and enjoy the food as it’s prepared and when it’s served.

The weather might be too hot, too humid, and you might be this close to wilting and melting into a puddle. But trust me; you should be patient and persevere.

Get low and comfortable at the plastic table: watch, listen, wait, smell, taste, and learn. 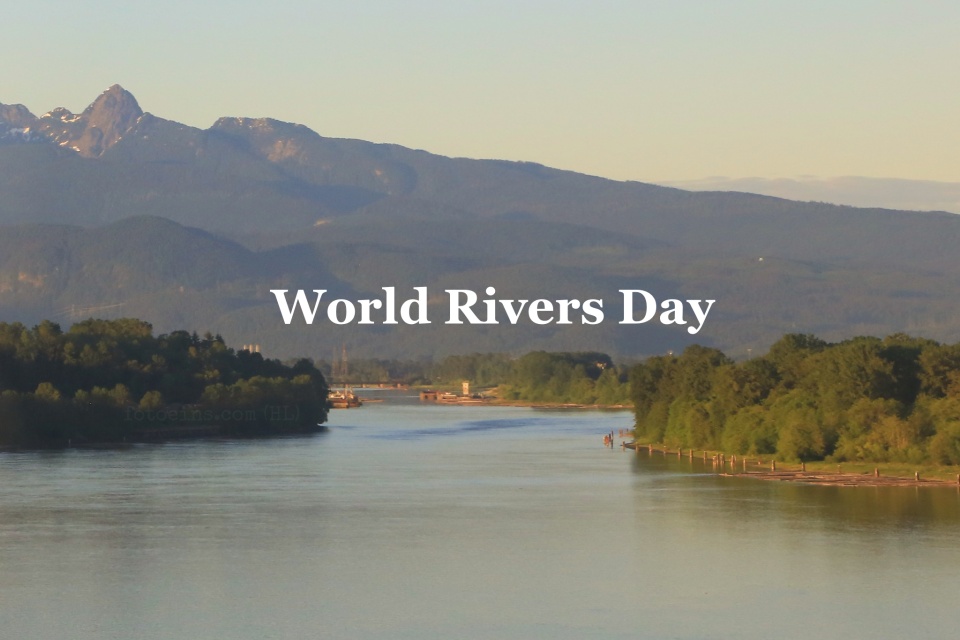 Above: Fraser River, east from Port Mann Bridge, between Coquitlam and Surrey, BC (HL).

The fourth Sunday in September is World Rivers Day. The University of Oxford’s Dictionaries defines ‘river‘ as:

“a large natural stream of water flowing in a channel to the sea, a lake, or another river.”

A river has always been water supply and demand: daily use and consumption; farming and agriculture; and where the waste goes, often back into the same supply. A river has always been about transport: trade and delivery of goods; shuttling people between places; and with people travelling, the exchange of language and culture. Throughout history, the establishment of towns and cities and the subsequent development of rivers have been about a mix of urban and rural elements, and about the relationship and interactions between people and their waterways.

END_OF_DOCUMENT_TOKEN_TO_BE_REPLACED

Under direct sunlight, the deep ochre hues in the Mekong are initially unsettling: is the entire river made of chocolate milk? Vibrant reds and blues await around the bend, amid the nutrient-rich fine rock-powder silt floating down from the continental interior.

The Mekong river stretches over 4200 kilometres from its source in the Tibetan plateau in southwestern China1 through Burma, Laos, Thailand, Cambodia, and Vietnam, to the river’s mouth at the South China Sea. The Mekong is one of Asia’s longest rivers, and is one of the world’s most productive rivers with number and volume of fish. There are over 1000 species of fish known in the Mekong, and despite the critical importance of the inland fishery industry, dangers are posed by overfishing threatening overall supply, disruption of natural flood cycles, and by the inhibition of spawning and migration from present dams and future dam construction. Based on the silt flowing from the Tibetan plateau, the Mekong Delta is also a critical fertile growing region supplying food and economic wealth throughout the region. International challenges remain about proper usage of the Mekong River.

We reach Mỹ Tho city (tp. Mỹ Tho), a two-hour drive from Ho Chi Minh City (Saigon). People have gathered at the docks, ready to join one of many river tours. Some boats are ferrying residents from the mainland to islands in the middle of the Tiền river (sông Tiền), the northern branch of the Mekong.

We hop from one wooden boat to the next, alternating between water and land, slipping in between and hiding among mangrove trees. The midday sun beats down, and the heat and humidity are unescapable. As we dart around the islands near Mỹ Tho, my eyes swing from one boat to the next: floating fish-farms, ferries shuttling people, dredging ships carrying mounds of silt towards the South China Sea, men carrying their hauls on fishing boats carrying their hauls, women running errands on skiffs.

Only four short decades have passed since the end of “The American War”: bullets flew, chemical bombs fell, landscape blighted, blood spilled, families destroyed. The smiles and hard looks are a big part of an indelible visual memory, a part of this nation’s recovery and of her people’s endurance.

I’ve had a few hours only to gloss over the machinery of daily river life, but like countless other experiences in the year-long worldwide journey, this afternoon is representative of another introduction, another “appetizer”. Because there’s always more, here and elsewhere, up- and downstream. It’s easy to forget we’re only 50 kilometres (30 miles) from the South China Sea.

1 See the location here or the map here

END_OF_DOCUMENT_TOKEN_TO_BE_REPLACED

Saigon is a metropolis in southern Vietnam with over 7 million people; some say there are upwards of 9 million in the area. Although often referred by its present-day name of Ho Chi Minh City, many still call the place by its old name of Saigon.

A big attraction in a short trip is always about the food. The out-of-this-world traffic points to everybody in a big hurry on the go, and it seems the entire population is on their motorbikes. This also suggests everybody is hungry, all the time.

Naturally, there are many places, stalls, and street-side carts, but if you’d like to sit down under cover and see what others are eating, you might give these three places in central Saigon a try.