Above/featured: From the regional train: facing southwest over Schöttlkarstrasse and the eastern end of the Wettersteinwand at right.

The German writer Johann Wolfgang von Goethe in 1786 described the alpine town of Mittenwald as “lebendes Bilderbuch” or “a living picture-book”. Images and descriptions in print and provided by visitors became draw and lure. Funny thing is I’d set foot and stayed in nearby Garmisch-Partenkirchen, and hadn’t taken the easy 20-minute train hop to Mittenwald.

I took care of that with two visits within a 15-month interval.

Wandering through Mittenwald is a delight because of the abundant fresh mountain air, picturesque surroundings, and the easy compact nature of the town. It’s a very familiar refrain for alpine towns in this part of the world.

Mid-winter is special with the combination of seeing mountains freshly frosted with snow, people of all ages wearing masks and costumes during carnival season, houses painted in colourful “Lüftlmalerei”, and the town’s special place in music history. When clouds break in spring and summer, it seems like an endless vista of blue skies and lakes along with green meadows and mountains to accompany your time outside on walks and hikes in the area.

With about 7400 residents, Mittenwald is about 100 kilometres (60 miles) south from Munich, located in what’s locally called “Werdenfelser Land” within Landkreis (county) Garmisch-Partenkirchen. The town lies conveniently between Garmisch-Partenkirchen and Innsbruck (Austria); the Mittenwald railway provides a vital connection to all three places. The nearby towns of Klais, Krün, and Wallgau also provide easy access to Mittenwald. 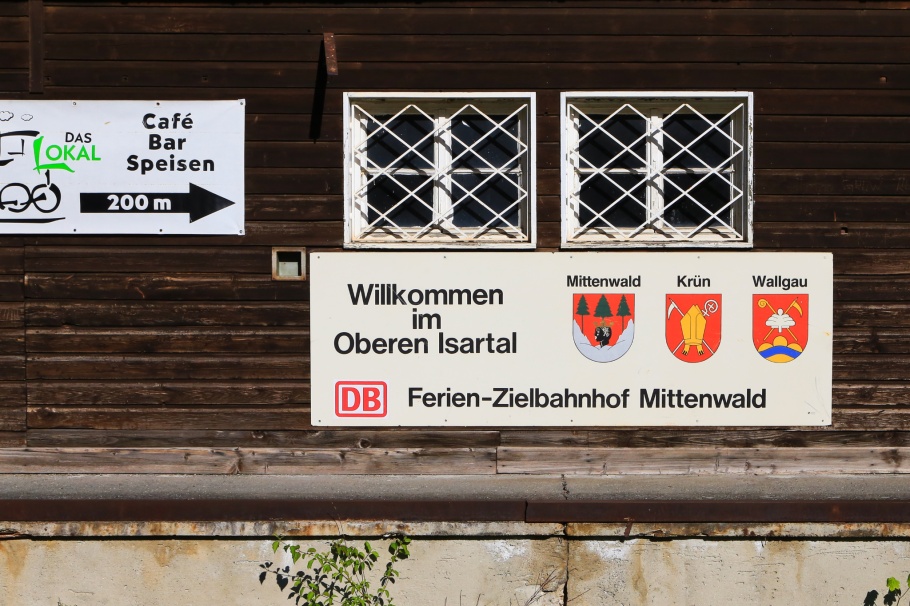 The “Buckelwiesen” can be translated as “hummocky meadows” or a wide stretch of alpine grassy fields with mounds or small rounded hills. The Buckelwiesen are under legal environmental protection, because they are the largest remaining area of relatively pristine alpine meadows which were at one time commonly widespread throughout the Alps and their surrounding foothills. Strict preservation rules apply to human activity. Farmers must use traditional methods: grass is cut manually (e.g., with scythe), fertilizer use is forbidden, and sheep and goats are allowed to graze on the meadows. The unique landscape and its ongoing treatment have been submitted by Germany to UNESCO for consideration as World Heritage Site. 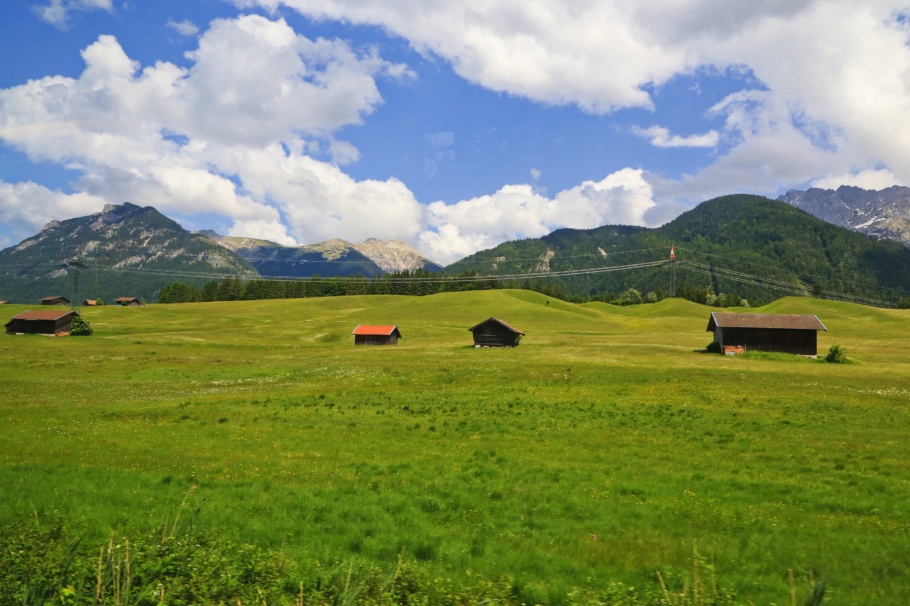 Facing northeast, on train from Mittenwald to Garmisch-Partenkirchen – 30 May 2018. 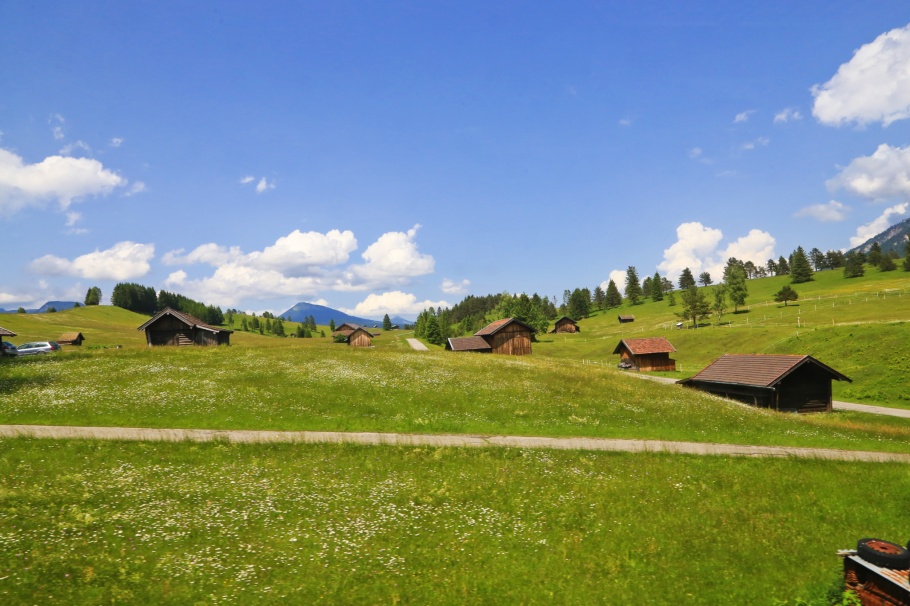 Facing north-northeast, on train from Mittenwald to Garmisch-Partenkirchen – 30 May 2018.

The Geigenbaum is a giant violin created by Mittenwald brothers Bernhard and Stefan Adam. Symbolizing the history of violin-making, the wood sculpture has stood as landmark in the town’s oldest neighbourhood Im Gries since 2009. But time and weather have taken its toll on the sculpture, as a stormy evening in November 2019 tore the sculpture into two pieces. The town’s residents are more than willing to come up with funds for the expensive replacement which recognizes the history of the wood carving and violin making in this neighbourhood. 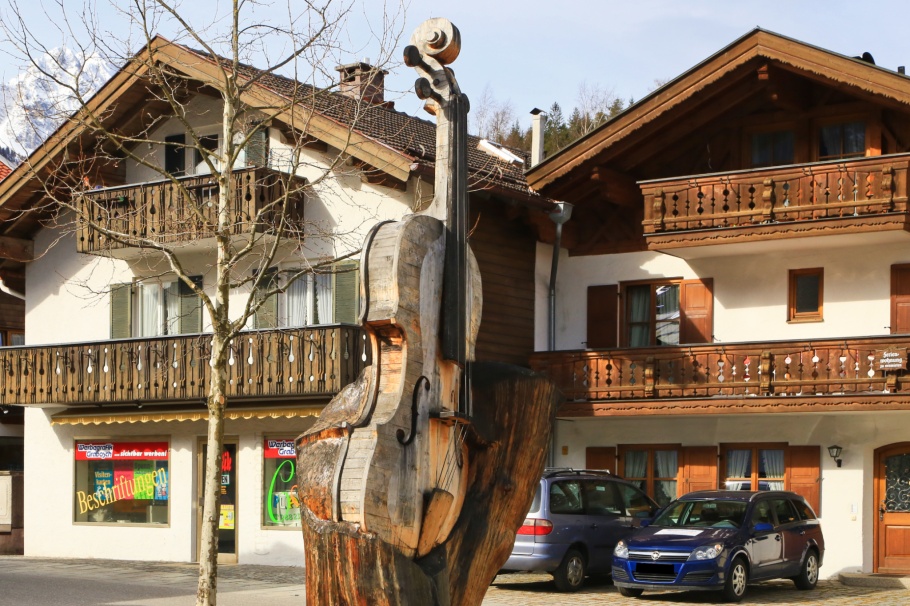 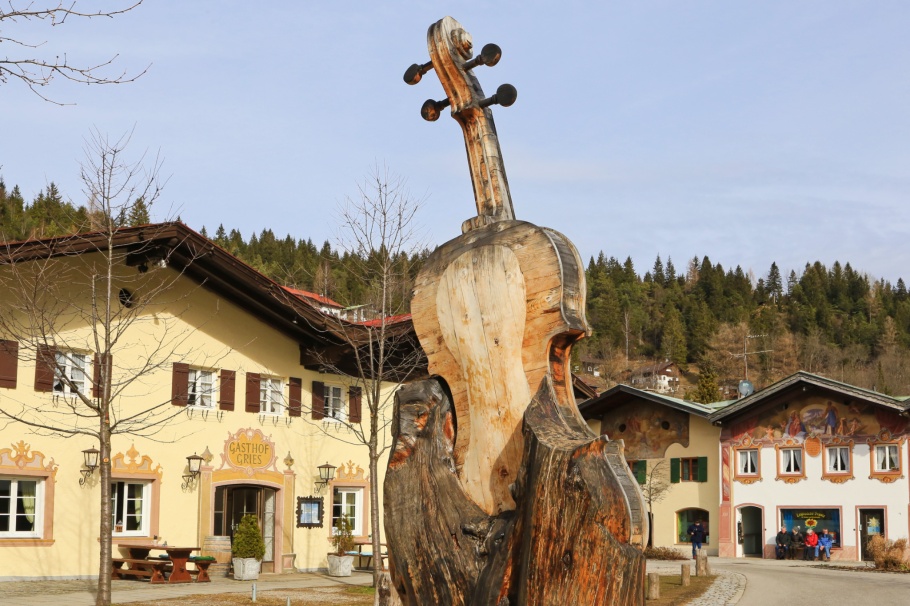 There’s something special about the region’s spruce and maple trees (e.g., Alpentonholz) and the subsequent tonewood grain and colour are selected specifically to create a unique sound to the specifications of the violin maker and demands of the violinist. As one of the European centres for violin-making, the Mittenwald scene took advantage of the local forests and existing trade routes between northern and southern Europe with a dominant role played by the Klotz family from the late-17th and well into the 18th-century. Founded in 1930, the Geigenbaumuseum or violin-making museum has been housed inside the Hollbeck House at address Ballenhausgasse 3 since 1960. The father of violin-making, Matthias Klotz, is honoured with a memorial statue at the northern end of Obermarkt. 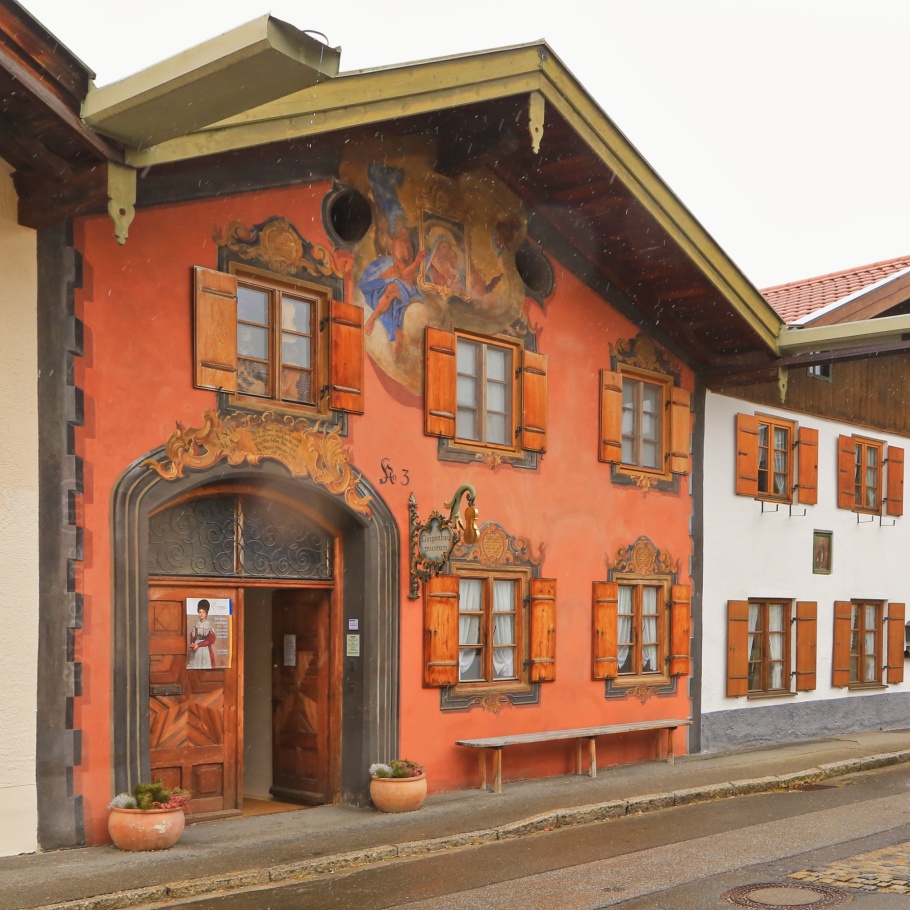 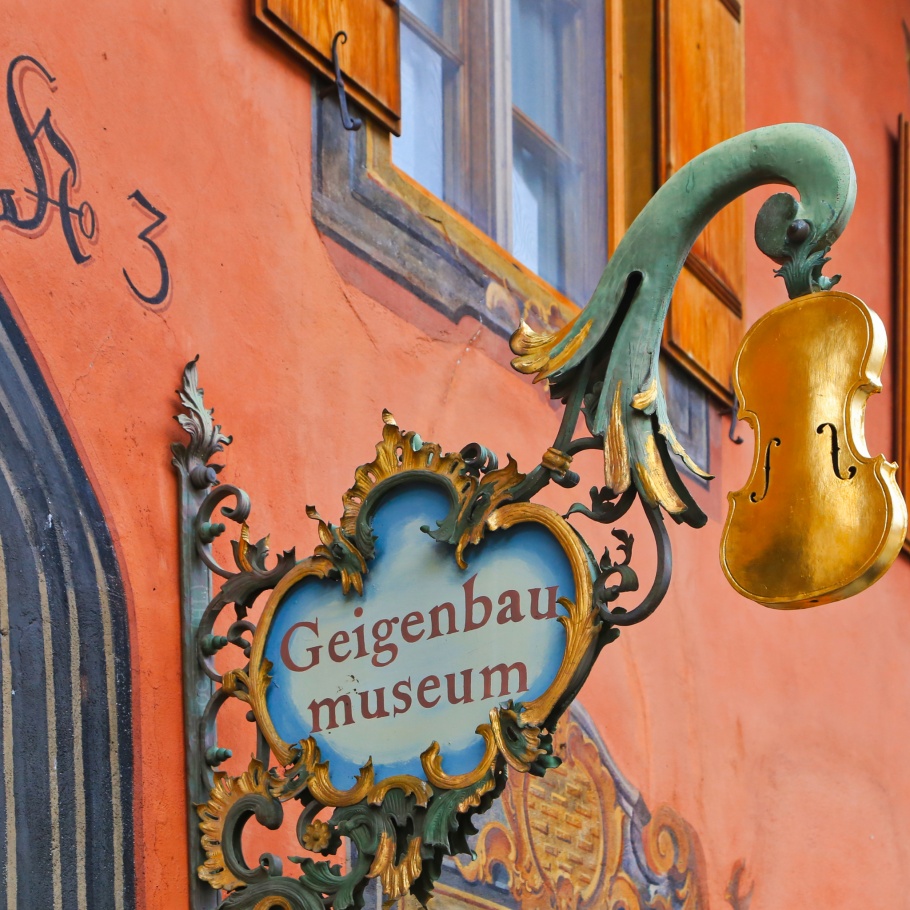 This building at Ballenhausgasse 3 has been inscribed by the Bavarian State Office for Monument Protection (Bayerisches Landesamt für Denkmalpflege, BLfD) as heritage property D-1-80-123-4. Photo on 2 Mar 2017. 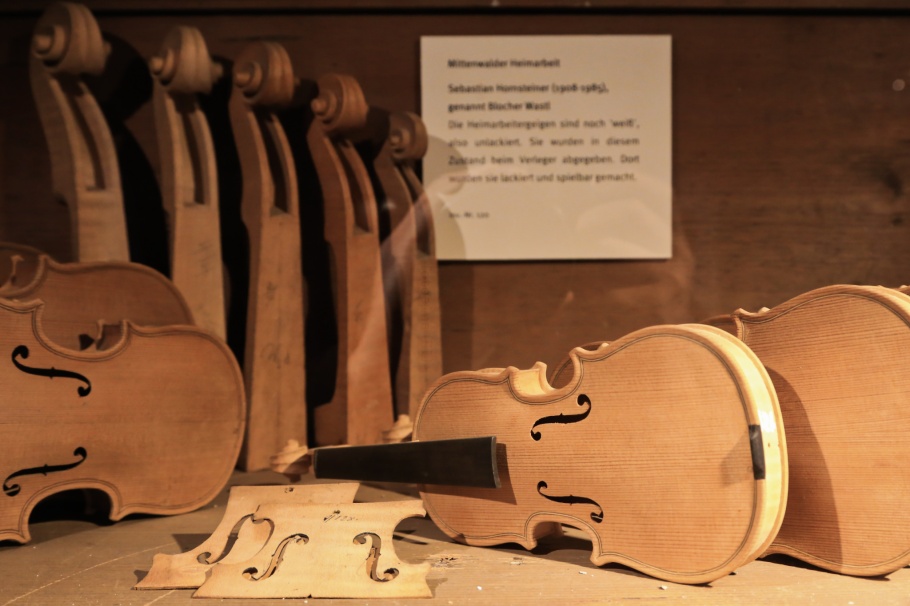 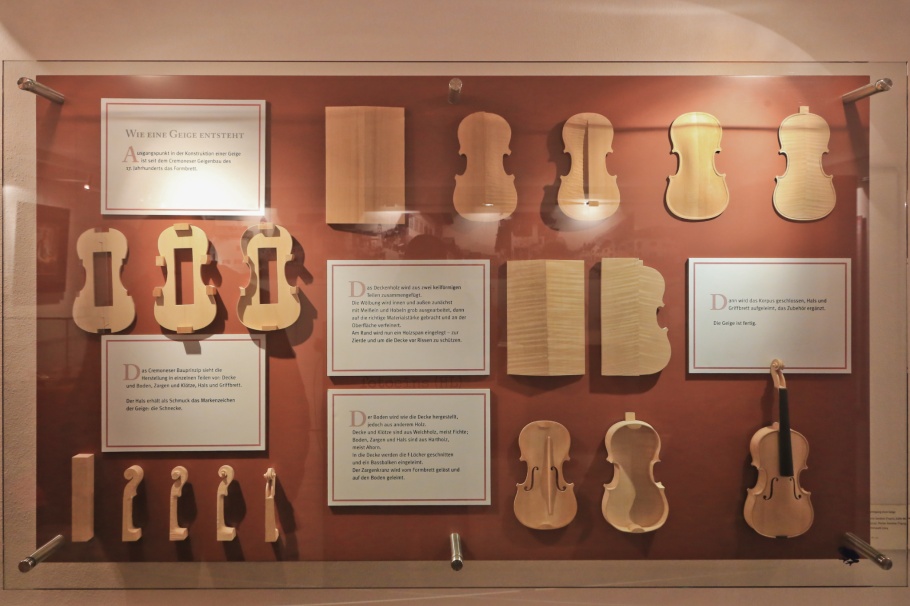 One of the great traditions in this part of southern Bavaria is the history of wood carving. Similar to what’s happening in nearby towns (e.g., Oberammergau), the struggle in Mittenwald has been about maintaining the quality and number of hand-crafted objects against the overwhelming surge of globalized industrialization and the increasing popularity of 3D-printing machines. Perhaps, being made to wait and being made to pay more invites a personal touch to the carving; then and only in that case, all may not be completely lost. 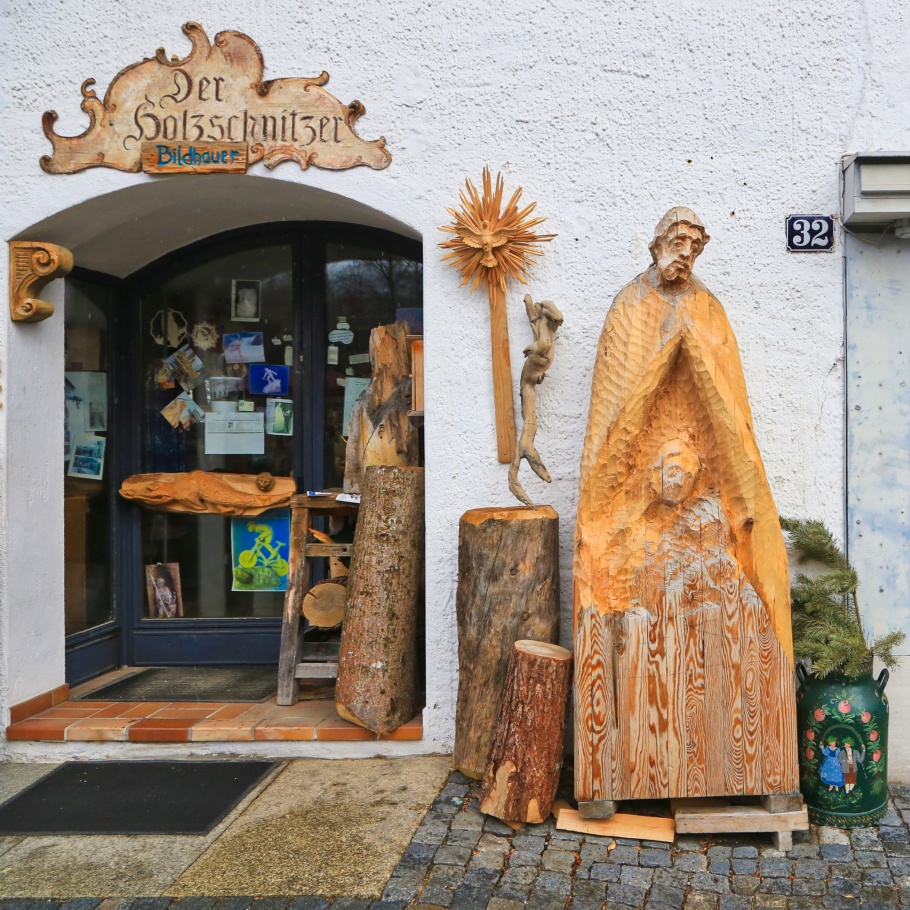 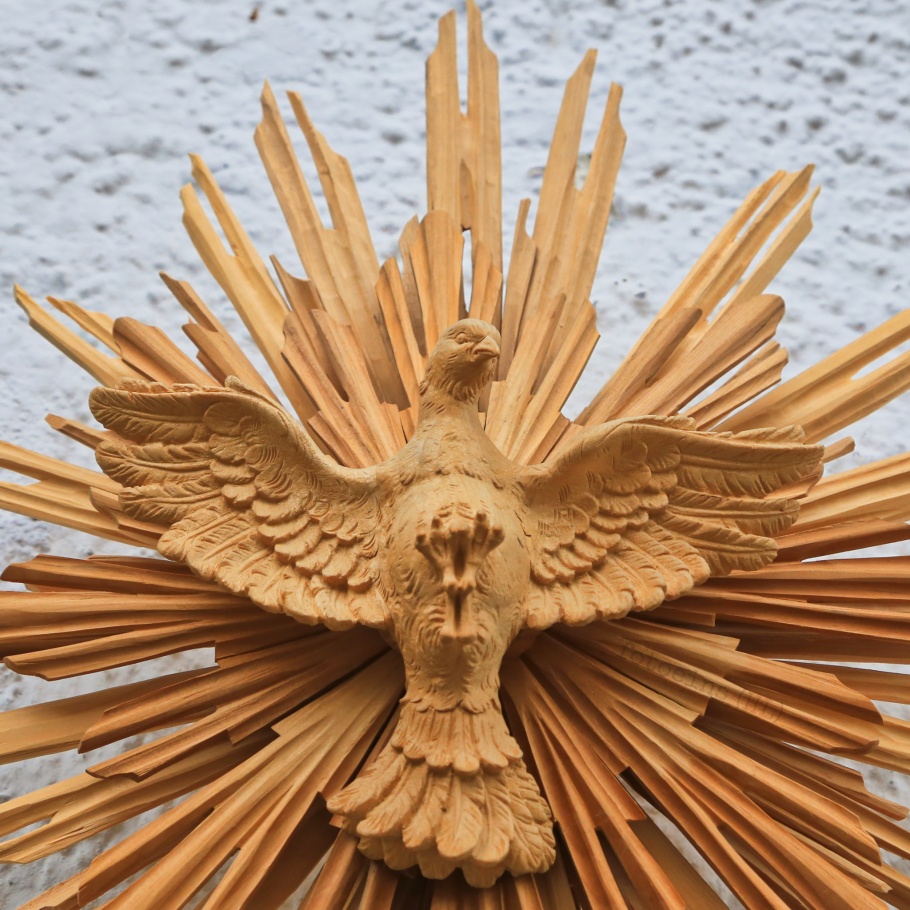 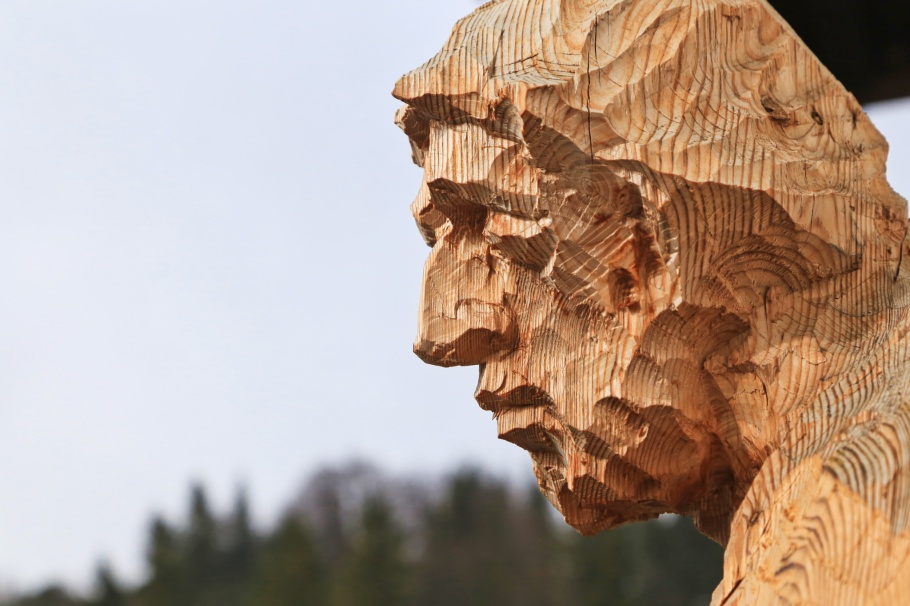 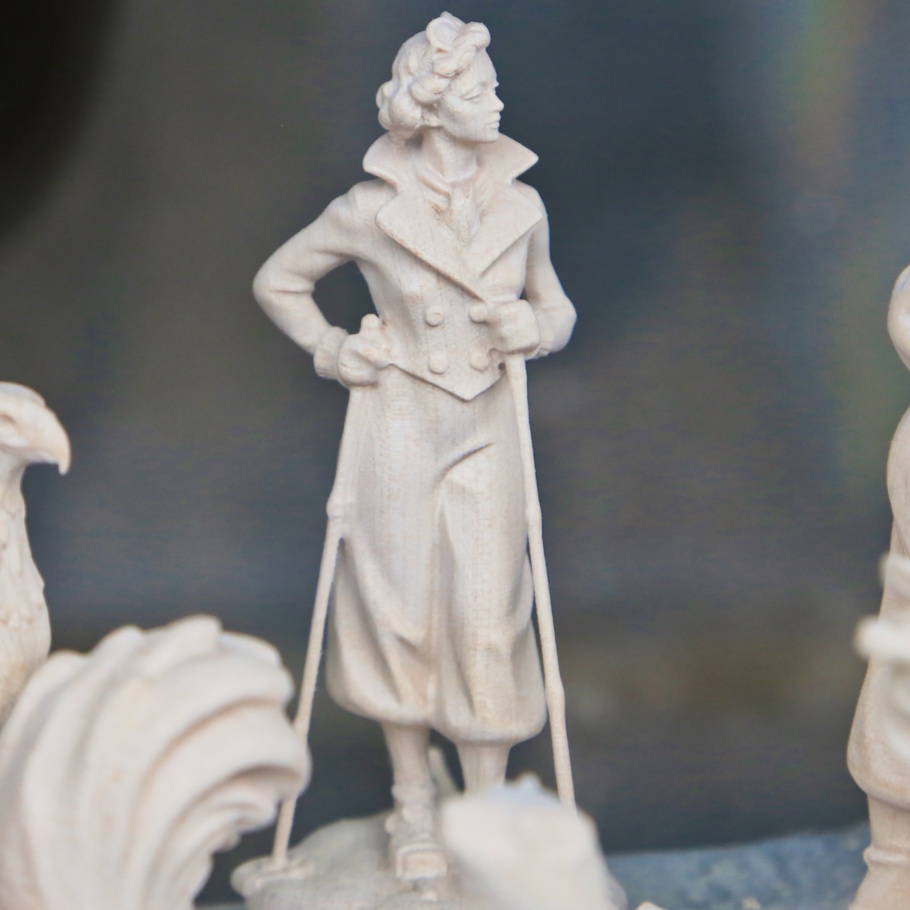 In southern Germany, an entertaining aspect of the Fasching carnival season is the wearing of “Holzlarven” masks which are individually hand-crafted from wood. A common festival costume is the “Flecker-Gwand” made with colourful patches or flecks which are custom-sized for children or adults. This all happens before Catholic Lent; the festival honours the pagan ritual by chasing away the evil spirits of winter and inviting spring’s arrival as quickly as possible. 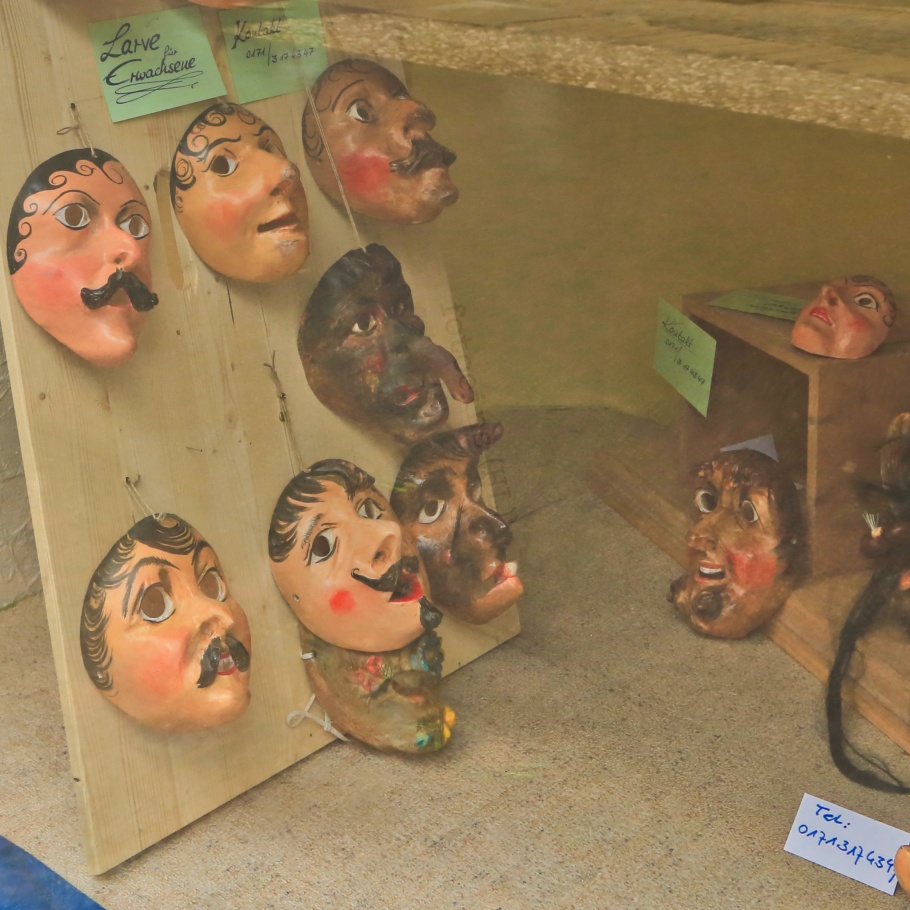 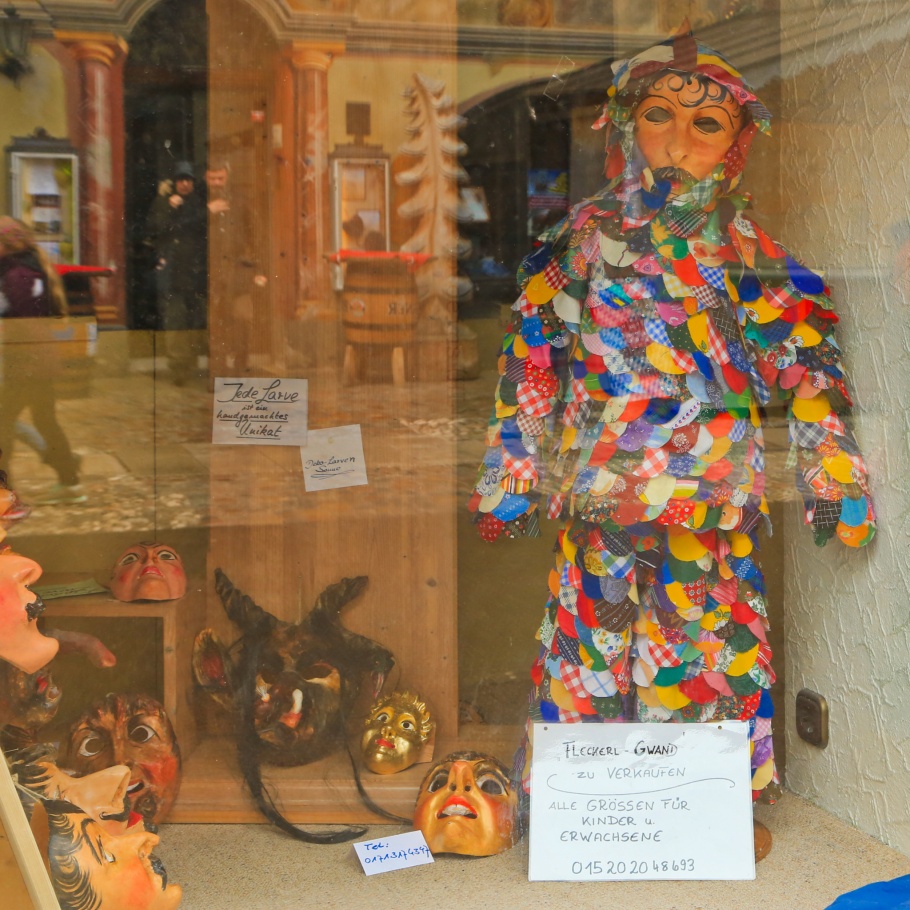 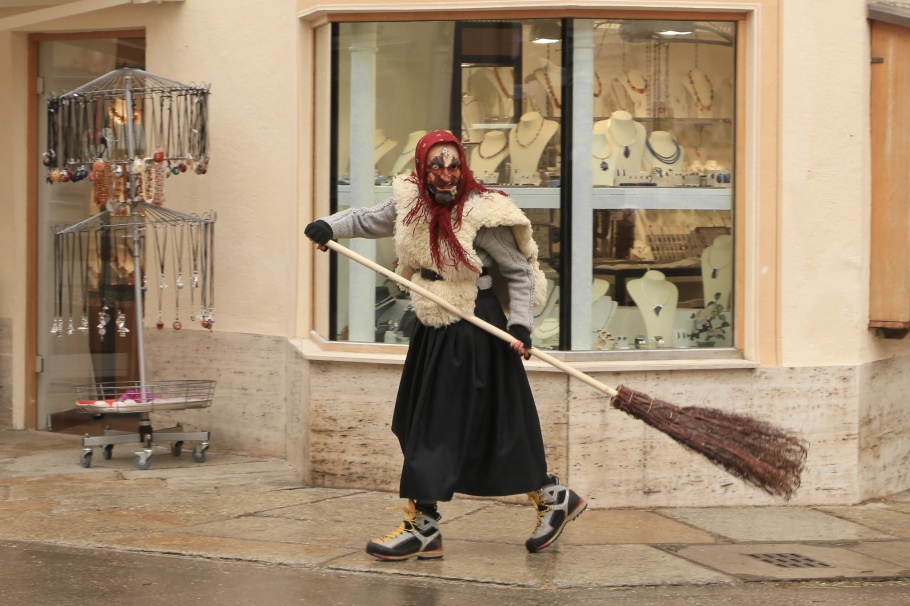 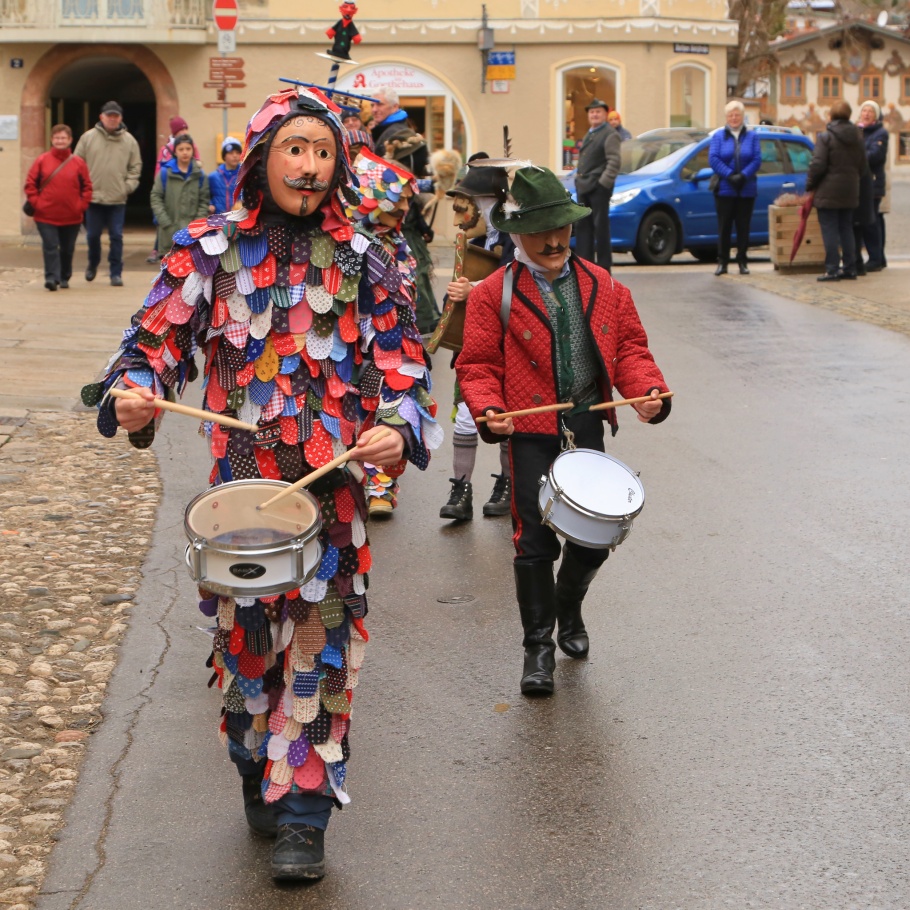 The oldest part of Mittenwald is called “Im Gries” whose buildings are beautifully painted with the “Lüftlmalerei” and includes the locations of the violin tree (Geigenbaum), wood carver (Holzbildhauer), and the home of famous violin-maker Anton Sprenger. Im Gries is part of the town ensemble under heritage protection provided by the Bavarian State Office for Monument Protection (Bayerisches Landesamt für Denkmalpflege, BLfD) as ensemble property E-1-80-123-2. 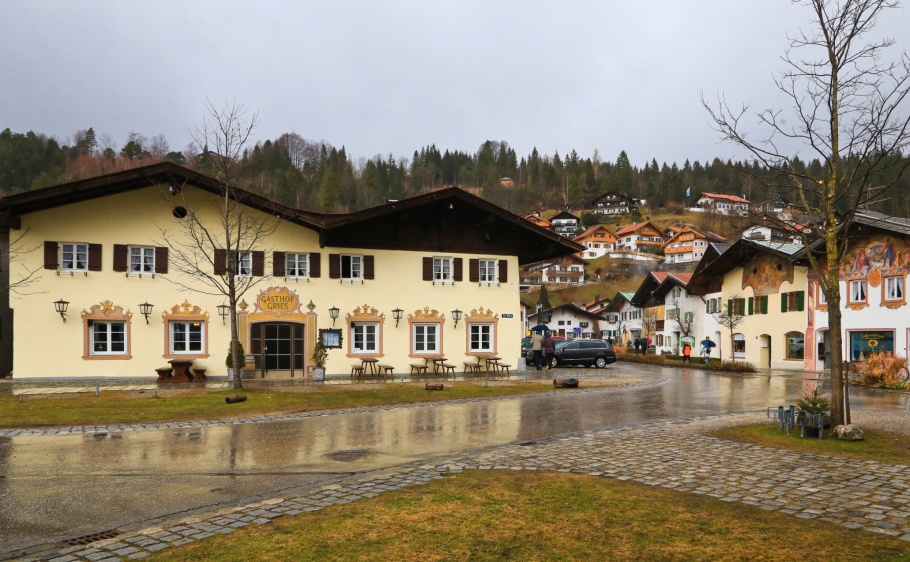 Mittenwald is about 15 km from the headwaters or source of the Isar river in Austria’s Hinterautal valley below the Karwendel Alps. The word “Isar” has Roman-Celtic origins with “Isaria” meaning “rapids” or “torrent”. Many in Munich will be familiar with the Isar river which flanks the Englischer Garten city park and with the river’s offshoot into Eisbachwelle creek where year-round urban surfing takes place. 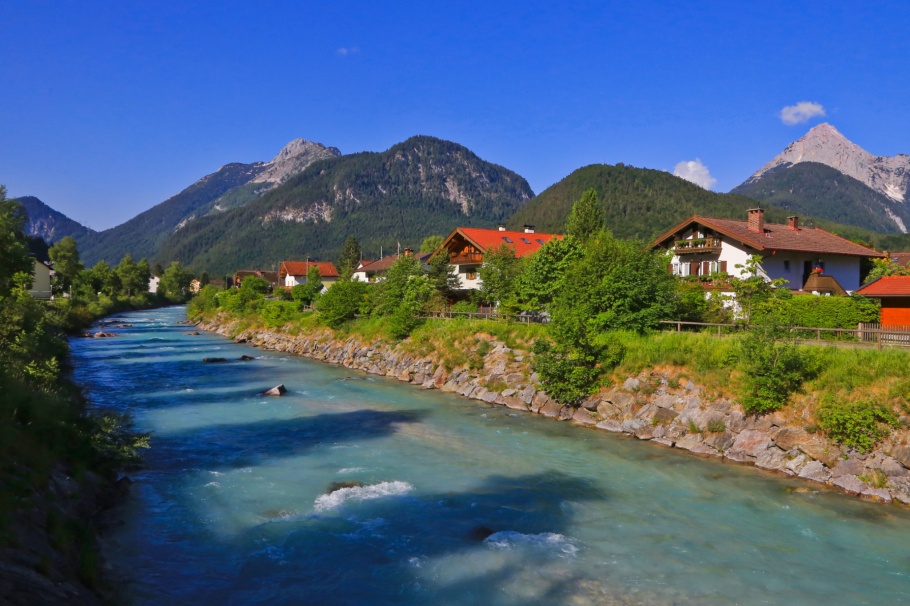 Every 30 minutes, the Karwendel cable car whisks visitors from the valley station (Talstation) at 933 metres (3061 feet) up to the mountain station (Bergstation) at an elevation of 2244 metres (7362 feet) with the trip lasting about 10 minutes. Upon arrival, visitors can walk the 450-metre tunnel under the rock face to the Dammkar or head up to the Karwendelgrube (Karwendel bowl) to enjoy views of the German and Austrian Alps.

WINTER: east end of the Dammkartunnel, and down into the steep Dammkar ski run – 27 Feb 2017. 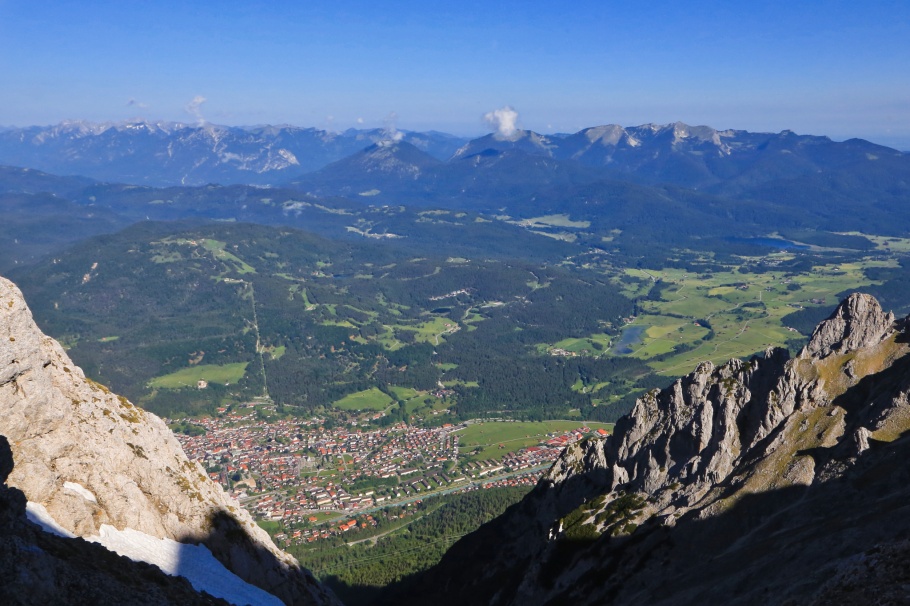 SPRING: Dammkartunnel down onto Mittenwald (lower centre), Isar river valley from lower-left to upper-right – 30 May 2018. 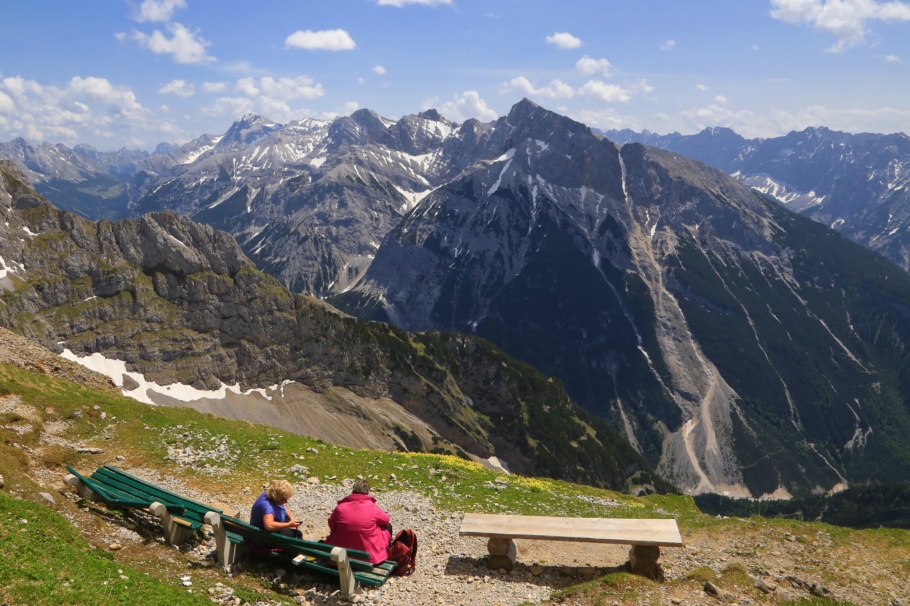 SPRING: from top of Karwendelgrube, straddling the international border and facing east to Austrian Alps – 30 May 2018.

Matthias Klotz (1653-1743) is considered the father of violin-making in Mittenwald. From a humble workshop starting around 1689, he and his apprentice turned successors pushed the town to the forefront and heights of producing violins of the highest quality, the traditions for which continue today in town with active workshops and an instrument-making school. In front of the Peter and Paul church is the Matthias Klotz monument constructed by Ferdinand von Miller in 1890. 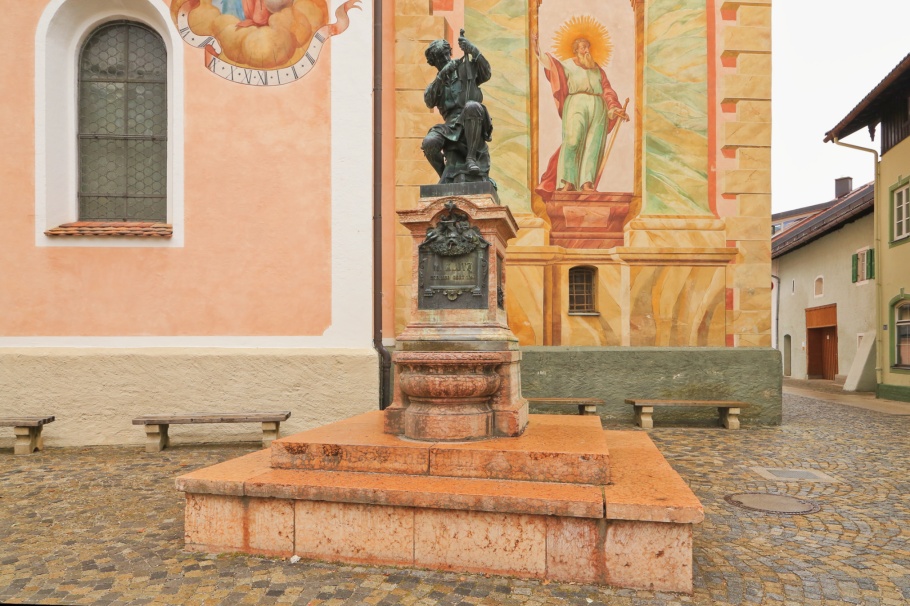 Next to Peter and Paul church is the memorial statue of Klotz which has been inscribed by the Bavarian State Office for Monument Protection (Bayerisches Landesamt für Denkmalpflege, BLfD) as heritage property D-1-80-123-89. Photo on 28 Feb 2017.

Paths in open fields north of town are included in the network of European pilgrim roads called Jakobsweg (St. James’ Way) running north-south through Mittenwald. On a clear day, I’m alone in the fields, far from clusters of other visitors. From the ground, the unobstructed view of the Karwendel mountains is unmatched. 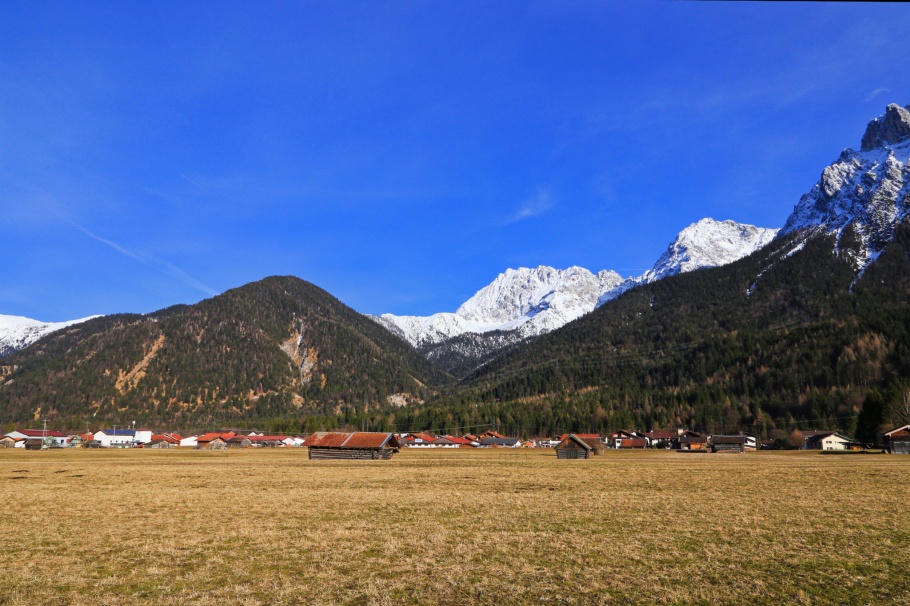 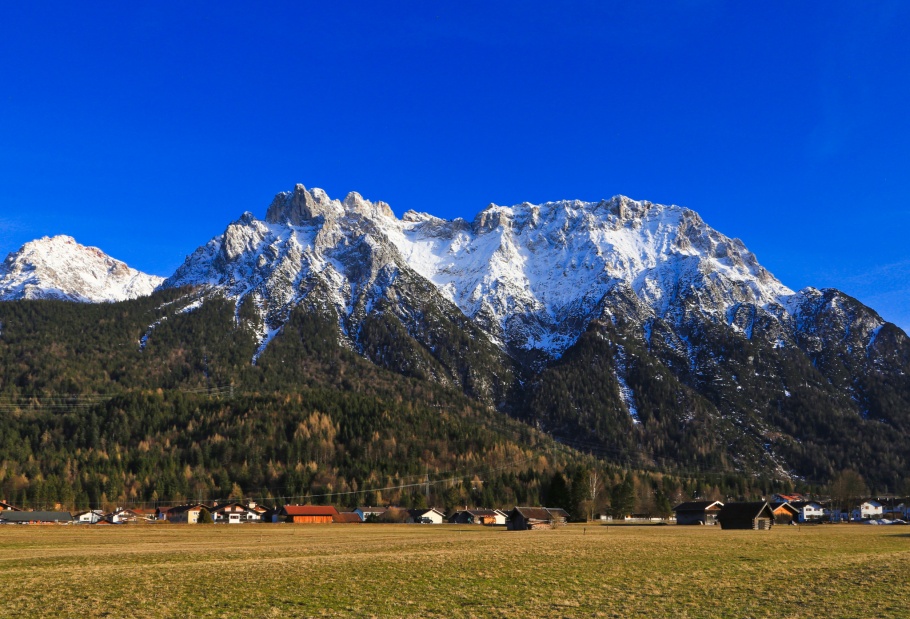 View southeast from Lainbacher Felder: the mountain station for the Karwendelbahn is near the centre of the upper ridge. Photo on 2 Mar 2017.

In the southern reaches of town near the location where the Leutasch river merges with the larger Isar, a path through a series of meadows leads to the Leutasch gorge and waterfall, both open only during summer season. It’s another part of town that’s quietly mine and far from the usual visitors. These paths are also a part of the network of European pilgrim roads called Jakobsweg (St. James’ Way) through Mittenwald. 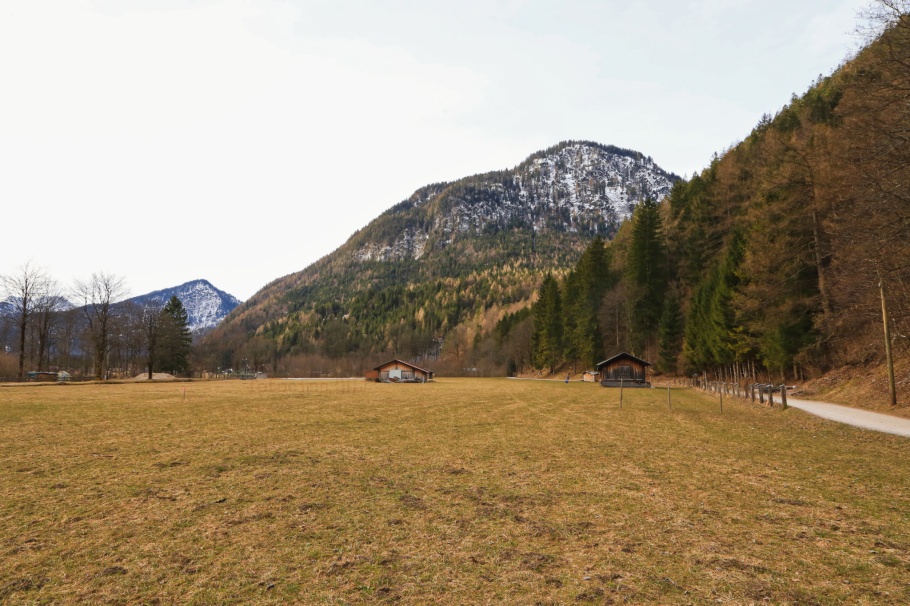 Facing south at Leutascher Ache: at centre is the Arntalköpfle (elevation 1529 metres / 5016 feet) sloping gently down and to the left towards the unseen border town of Scharnitz in the distance. Photo on 3 Mar 2017. 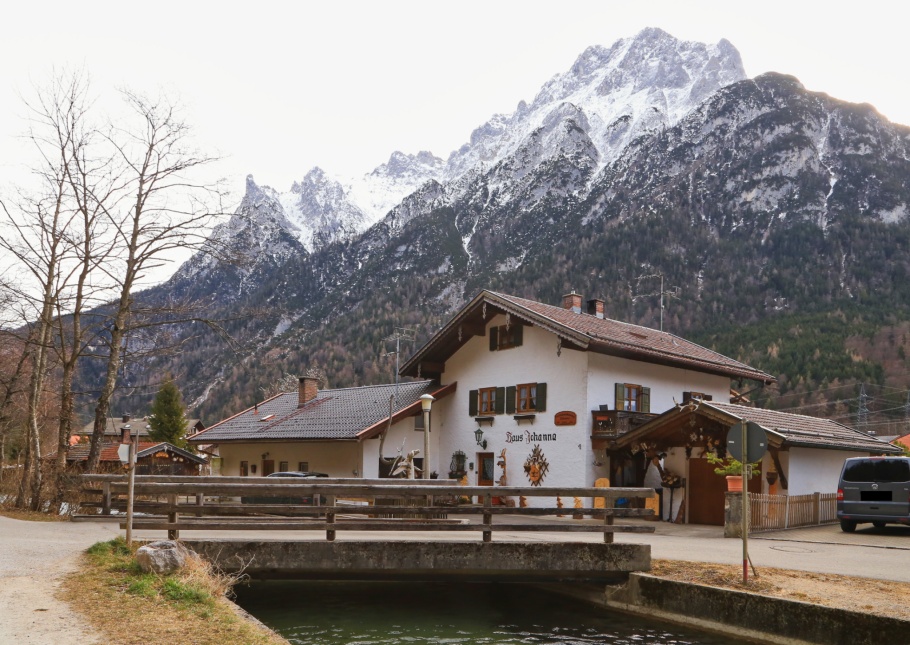 Next to the Leutasch canal is this vacation house Ferienwohnung Johanna with the Karwendel behind – 3 Mar 2017.

When Martin Luther was called to meet with papal authorities in 1510-1511 on behalf of a number of Augustinian monasteries, he walked from Wittenberg to Rome and back; many have suggested he stopped in Mittenwald and stayed for at least one night in 1511. This 1983 stone commemorating his (possible) stay in Mittenwald appears at the entrance to the town’s evangelical (Protestant) church. 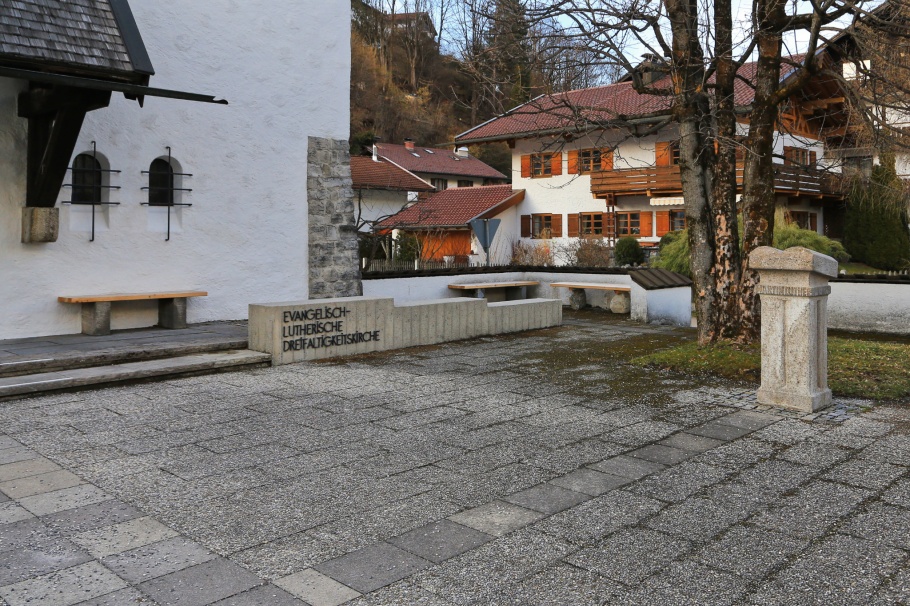 Near the entrance to the evangelical church is the Luther memorial stone, seen here at right – 2 Mar 2017.

Obermarkt is a quarter-kilometre pedestrian north-south road through the heart of the Old Town with cafes, hotels, shops, and restaurants on both sides of the street. With vehicular traffic strictly controlled, many sit outside in the sun to sip their beverages and watch people and the world go by. At the north end of Obermarkt is the Peter and Paul Church (visible at centre in the image below) where the memorial statue to Matthias Klotz also resides. 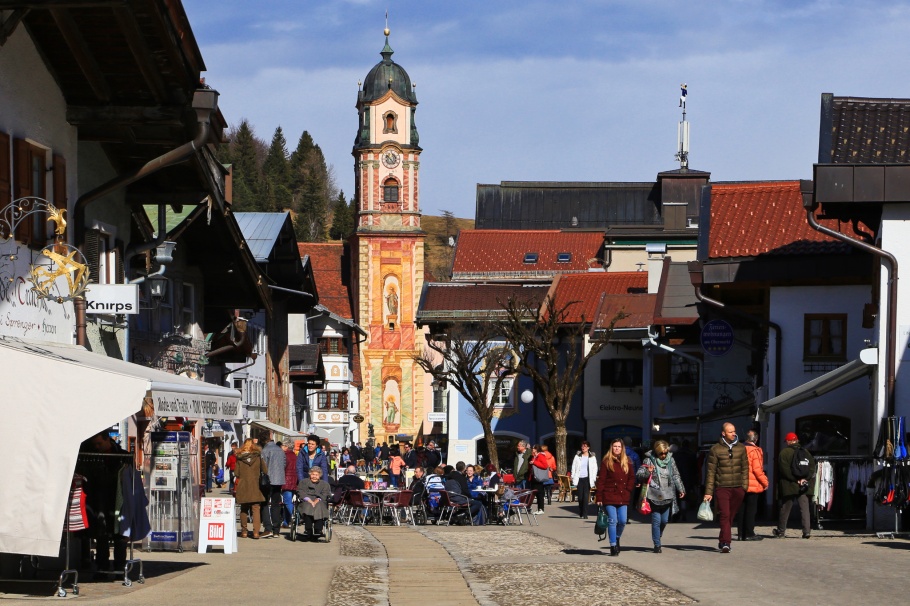 A wooden raft installed at Platzl (“little plaza”) highlights the medieval history of wooden rafts and their construction (Flösser, Flossbau), and how river rafts on the Isar were critical to north-south trade and the local economy. Mittenwald was once a stage for transporting goods between Venice/Italy in the south and Munich/Bavaria to the north (via Brenner Pass and Innsbruck). With trade shifting over time to a different mountain pass, Mittenwald lost its importance until railways entered the picture. The word “Floss” is the preterite tense for “fliessen” which is the German verb “to flow”, and is similar to “Fluss”, the German word for “river”. 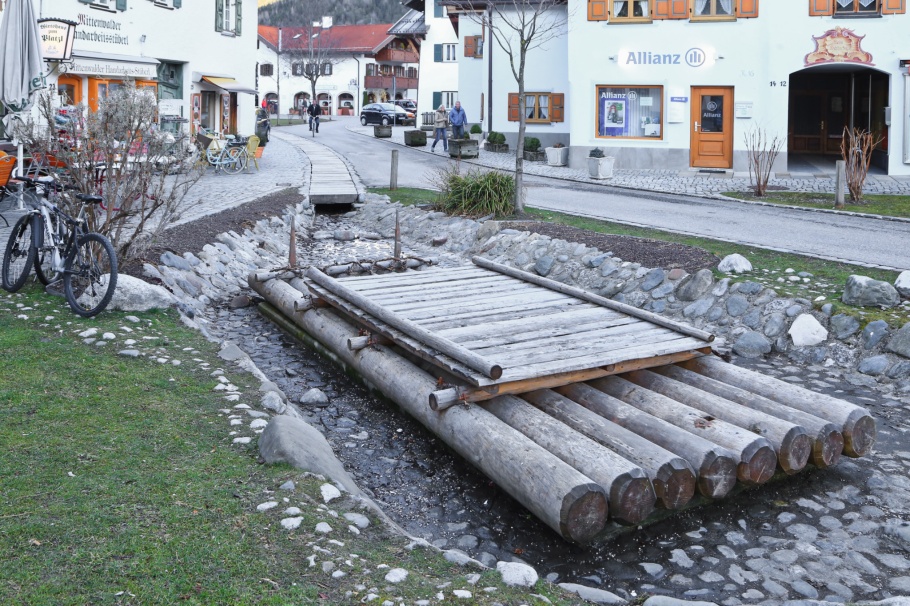 Replica river raft at Platzl: rafts on the Isar once carried goods from Mittenwald to Munich and Landshut. Photo on 2 Mar 2017. 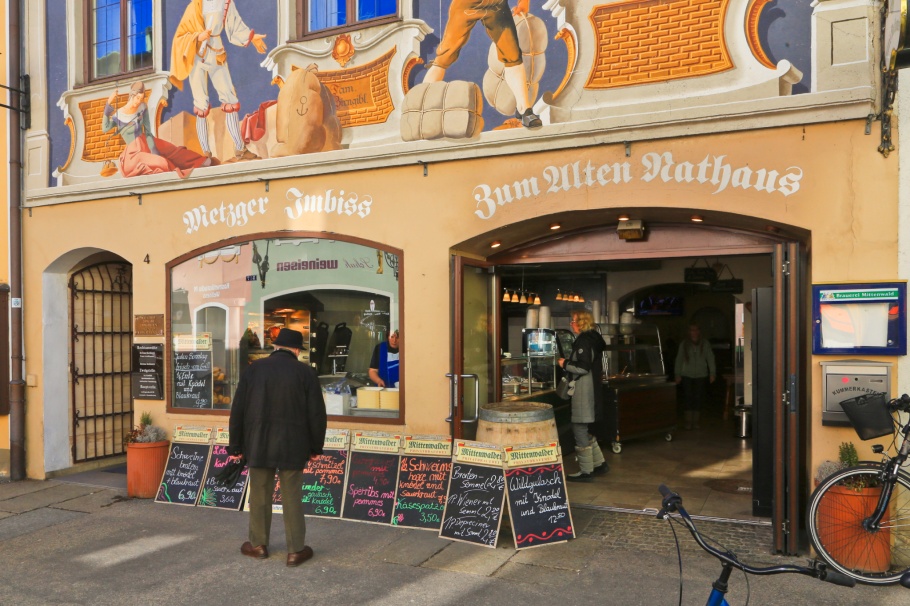 Possible lunch options at Zum alten Rathaus (At the old town hall): listed on the little chalk boards at the “Metzger Imbiss” (Meat shop / snack stand) are daily specials and typical meals found in the region.

I made all photos above with a Canon 6D mark 1 in winter (February) 2017 and spring (May) 2018. This post appears on Fotoeins Fotografie at fotoeins DOT com as https://wp.me/p1BIdT-fBN.