To begin our journey through the American Southwest, one of our first destinations was the International Balloon Fiesta. The largest balloon festival in North America is held every October in Albuquerque, the most populous city in the American state of New Mexico. Located roughly in the centre of the state and bisected by two major interstate highways I-25 and I-40, Albuquerque has seen its fair share of human activity and history:

Having arrived from our respective cities at sea-level, we needed about a day or two to adjust to 20% less atmosphere* at the city’s mile-high elevation. Not only did the balloon festival exceed our expectations, we’re happy to share some of our favourite moments and places in and around “The Duke City”. With a limited number of days in the city, a rental car is the easiest way of getting around the city.

Skies are clear, the air cool and crisp on an early autumn morning. Dawn breaks through the cloak of darkness, and slowly, we see from a distance little oval blobs rising into the sky. Intermittent light reveals flames and the signature of rising hot air pushing a handful of balloons higher. This is the Dawn Patrol. And when first light begins striking the river valley below, it’s easy to forget how there’s a quiet murmur in the crowd, despite thousands already on the festival grounds. Their gaze and rapt attention reach skyward: morning mass ascension means hundreds of hot-air balloons of different colours, shapes, and sizes; gargantuan up close, yet shrinking to dots out on the horizon, as far as the eye can see.

The festival takes place annually over several days, beginning the first weekend in October. Spectators, enthusiasts, and balloon owner-pilots gather at the Balloon Fiesta Park in the northwest corner of the city. What makes balloon flying so good here are geography and conditions created in the “Albuquerque Box.” 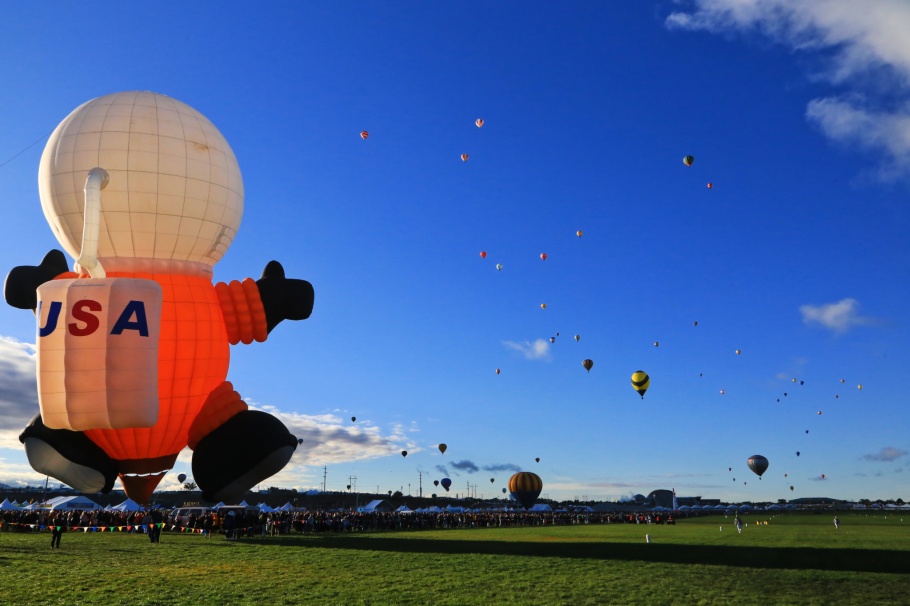 With its doors first opening in 1927, the KiMo Theater is an example of an “atmospheric theater” for the western United States; the architecture and decorative elements are held as a prime example of a hybrid style called “Pueblo Deco.” After years of neglect, the theater was saved from demolition in 1977 when the city’s voters approved the purchase of the theater, and the city proceeded with renovations with the most recent phase completed in 2001. The working theater is now a landmark for both city and Route 66, and has been listed on the U.S. National Register of Historic Places since 1977 (reference number 77000920).

Guided tours of the theater interior are generally by appointment, but check the website to register for tours. Guided public tours are available during the Balloon Fiesta (2018), and we leap at the opportunity. Accompanied by other out-of-towners for the balloon festival, we’re on an informative and entertaining 1-hour guided tour led by theater manager Larry Parker. 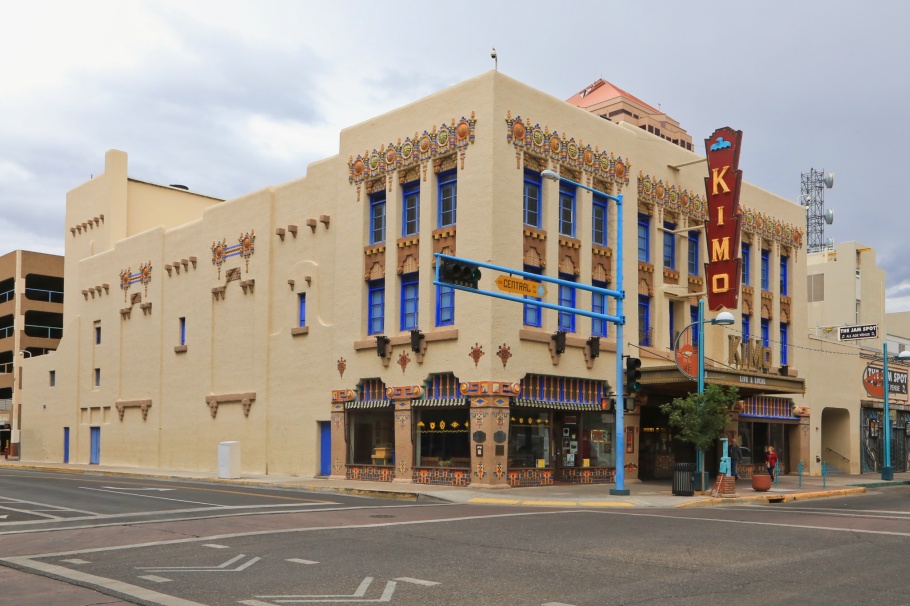 The pre-1937 alignment of Route 66 ran north-south along 4th Street as the highway arrived from Santa Fe in the north. With realignment, the post-1937 version of Route 66 avoided Santa Fe altogether and ran east-west through Albuquerque on Central Avenue. That culminates in the unusual circumstance that the two alignments of highway US-66 intersect at Central Avenue and 4th Street. I like odd bits like this, as well as signage “Historic Route – New Mexico – US 66” fixed to traffic-light poles on both streets. 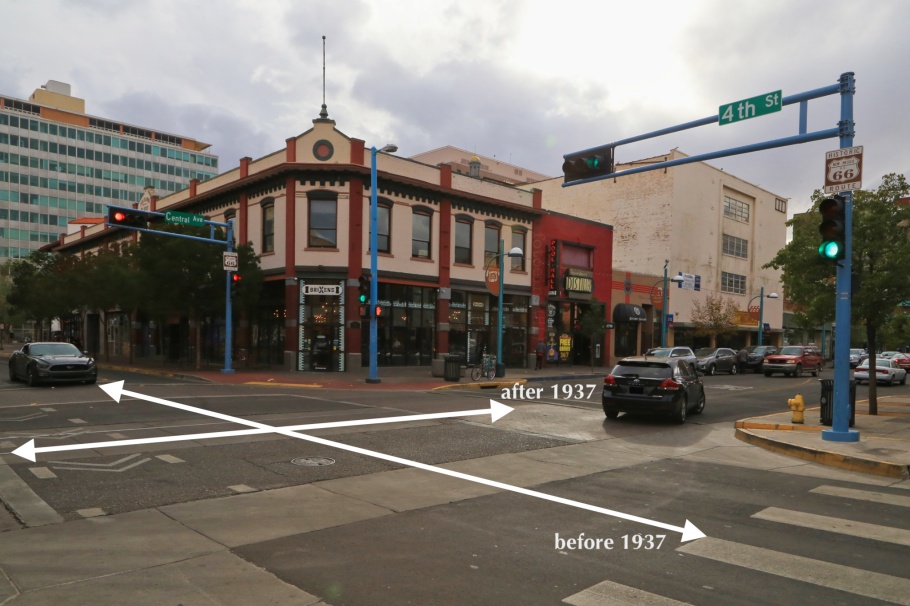 Muros ABQ is succinct with the description of the vivid 1995 mural, “The Mother Road / El Camino de los Caminos”, by Joe Stephenson for The Working Classroom:

This mural captures the spirit of Route 66 in New Mexico. A blazing sunset provides a dramatic backdrop while cars, trucks, and motorcycles travel the highway to their ultimate destination. It pays homage to the past and present of the famous road and highlights the uniqueness of the state as the asphalt cuts its path across the dusty desert.

As a product of the Canadian Southwest, I’m familiar with the names of First Nations’ peoples like Haida, Musqueam, Squamish, and Tsleil-Waututh. In this part of the southwest U.S., I’m learning about the 19 Pueblos in New Mexico: 19 distinct indigenous communities who are all represented in the cultural center with a blend of historic artifacts and present-day story, song, and dance. And soon, we will leave New Mexico for Arizona, and we’ll be going through the lands of the Navajo Nation. 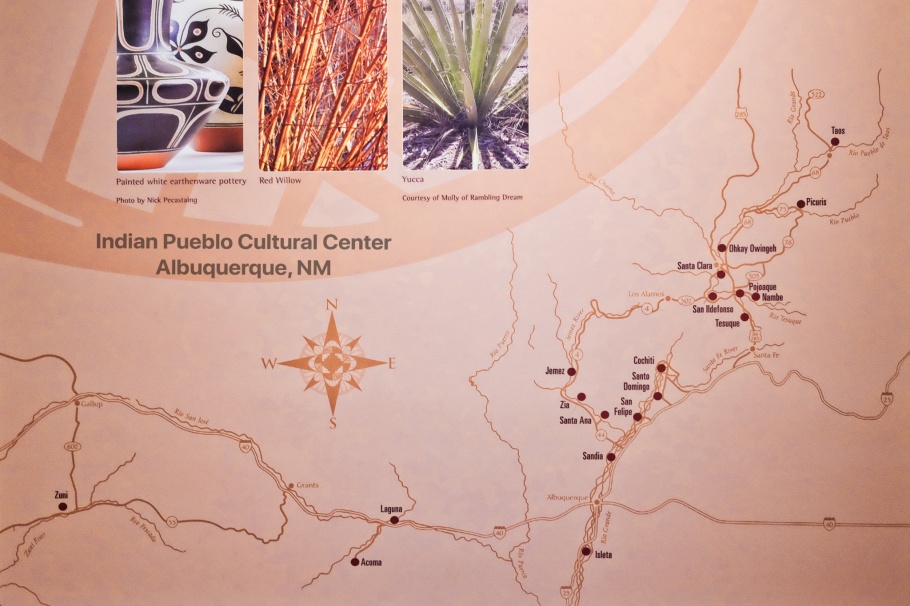 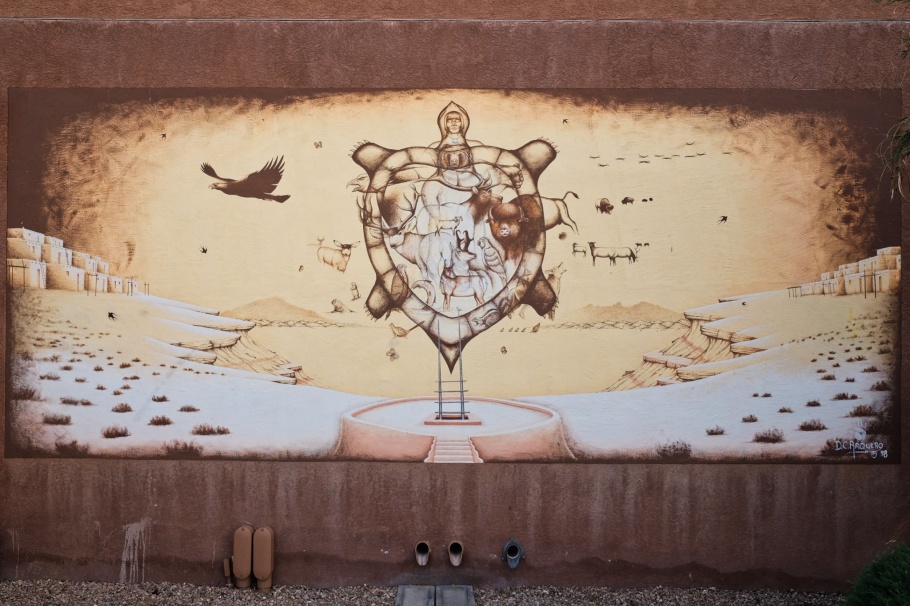 During the balloon festival, there are lots of visitors in Old Town. There are no chain-style restaurants and hotels in the vicinity, but there are plenty of shops to relieve visitors of their cash. But I think a walk through the compact original city centre is worth doing for the sights and the sounds. Bright colours light up our eyeballs from all sides: from the ubiquity of hanging red chile ristras, wall murals, to the warm orange of the (faux?) adobe construction. Lively conversation is engaged with shop owners, with comments about the kinds of visitors in the absence or presence of the balloon festival. We’re amazed by the small but holy ground marked by the Chapel of Our Lady of Guadalupe. In spending at least 90 minutes in the American International Rattlesnake Museum, we’re mesmerized by the sight of all those rattlesnakes (no touchy-feely here, thank you), and we’re equally mesmerized by the soothing sounds of Sir David Attenborough’s narration in a documentary on rattlesnakes as reptiles. 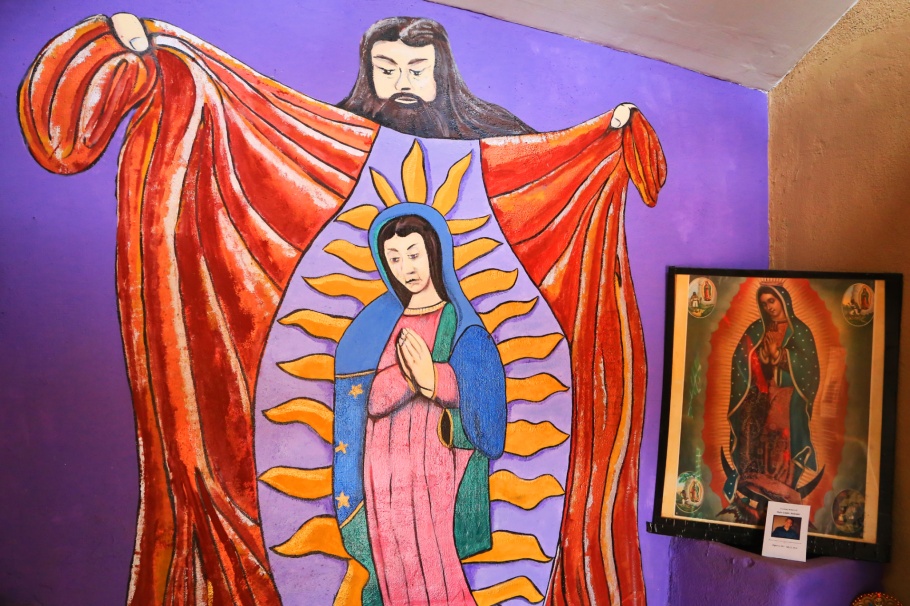 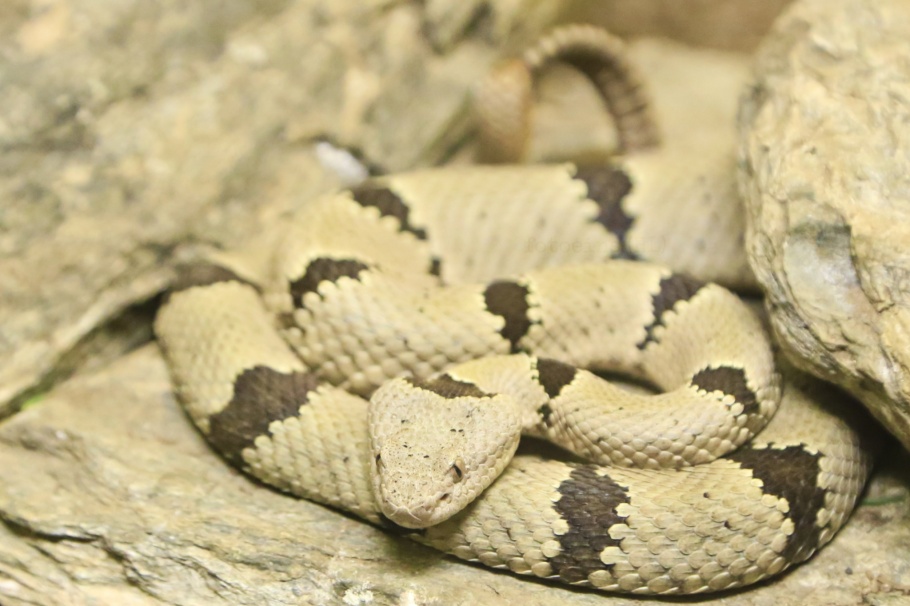 We stop first at the Visitor Center for information and a quick look, before we embark a little farther south to park at no charge at the trailhead to the Rinconada Canyon Trail. The trail traces a 3.5-kilometre (2.2-mile) loop at the bottom of the Rinconada Canyon whose cliffs mark the edge of past lava flows from the extinct volcanoes to the west. Petroglyphs are carved or chipped images of animals, symbols, and human figures on the black volcanic rocks. The carvings number close to 20-thousand in the area. While some petroglyphs are clearly 20th-/21st-century, many date back to an age of 400-700 years and some go back as much as 3000 years. The best clearest petroglyphs are found in the deepest part of the canyon. Aside from the view of the distant Sandía Mountains, there are no petroglyphs to see on the return part of the loop. We’d recommend returning the same way you arrived to see possibly other (or even the same) petroglyphs from a different view angle. 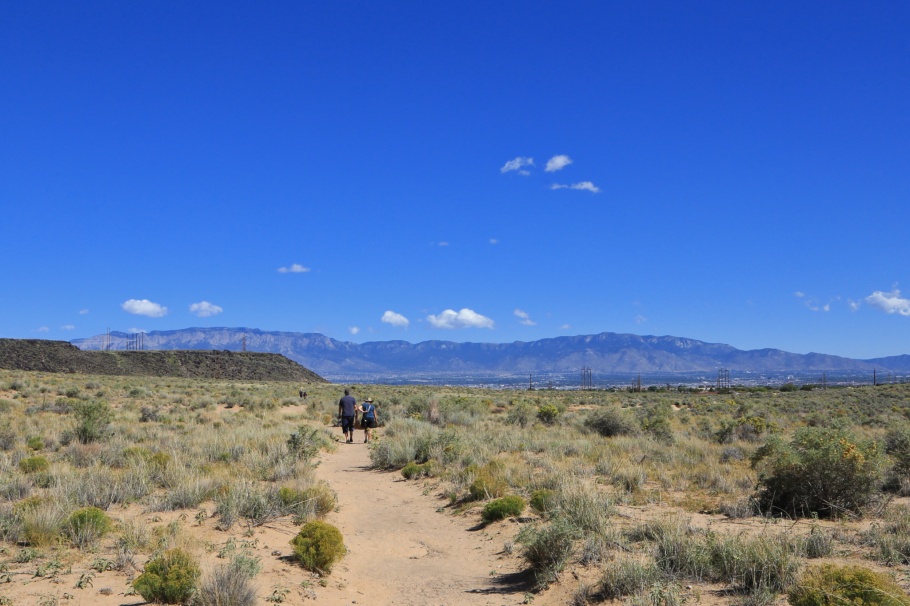 We took our vehicle for a scenic drive on the Sandía Crest Highway National Scenic Byway (NM state road 536) in our ascent to the Sandía summit. From the “big I” (I-25/I-40 junction), it’s 23 kilometres (14 miles) east to exit 175 at Tijeras for state highway 14. Then it’s north 9 kilometres (6 miles) on NM-14 to San Antonio. A left turn makes west onto NM-536, where the Scenic Byway climbs into the Cibola National Forest, with the narrow winding road opening up to ponderosa pines and conifers, and changing to fir and spruce at higher elevations.

At Sandía Crest, the elevation is 3255 metres (10678 feet): we’re over two miles above sea level, and about one mile above the city itself. We’ve been at altitude for just over 24 hours, but steep sections and stairs make us acutely aware of the thin air. There’s only two-thirds of the atmosphere at this altitude compared to the atmosphere at sea-level*. Remembering lessons learned when I used to spend nights at telescopes on mountain summits, we step inside the visitor center for a look and to ease our breathing. Securing our hats and jackets, we go back outside and wait for the sunset; temperatures drop and wind speeds pick up. Western skies fade, as eastern skies turn purple into darkness.

Sandía Crest and the upper station for the Sandía Peak Tramway are at different locations along the ridge. From the upper tramway station to the crest proper is a 3-kilometre (1.8-mile) hike on trail #130S (South Crest Trail).

That Left Toin at Alba-koi-kee

I spent many hours in childhood watching Warner Brothers Cartoons. One theme was a lost Bugs Bunny with a specific catchphrase, and the rest of the cartoon dealt with circumstance and consequence. It turns out if you happened to be driving west through Albuquerque on US route 66, there was a left-turn you had to make to remain on the highway towards Arizona and California. I wrote about “that left toin” here.

We’re on our way to meet with friends whom I met when I lived in Minneapolis and who returned to Albuquerque for work and family. We’re fortunate the directions take us onto Tramway Road Northeast which is also New Mexico state road 556. Driving east, the mountains grow taller and appear impenetrable; the colour on the mountains is light pink with the afternoon sun behind us. The colours here look a lot like the colour of salmon fillets or watermelon (sandía).

Munchies in the Metro

Everybody’s gotta eat, and in our enthusiasm, we found and consumed (many) biscochitos, New Mexico’s official cookie made with shortbread and flavoured with sugar, anise, and cinnamon. We also had great food at the these locations:

One Response to “My Albuquerque: big balloons & other highlights in Duke City”