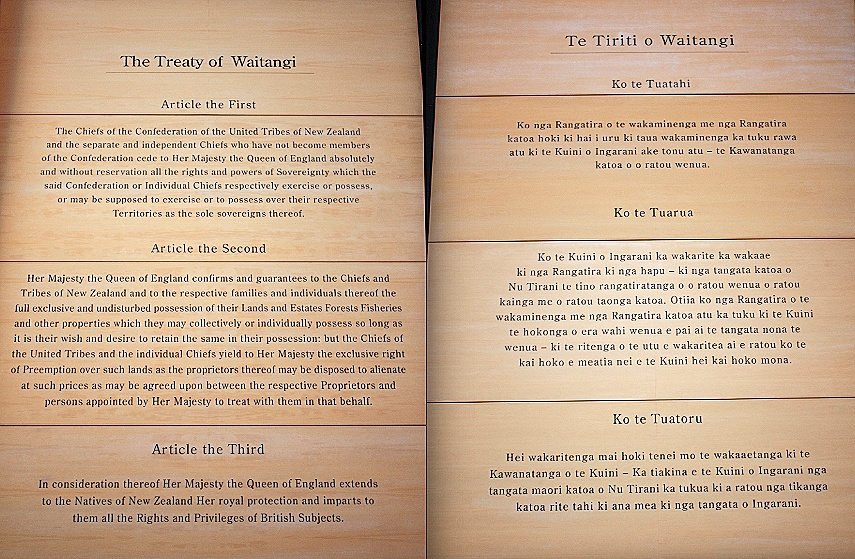 In New Zealand, February 6 is a public national holiday known as Waitangi Day, marking the 1840 signing between the English and the Maori of the Treaty of Waitangi (Te Tiriti o Waitangi). This treaty became the founding document for present-day New Zealand. While Maoris and non-Maoris coexist in relatively good, peaceful, and cooperative terms, the language providing guidance from the Treaty of Waitangi and the “appropriate translation” remain contentious. What happens next will pave the way forward not only for the future of New Zealand, but also for native and non-native cooperation and relations for other nations in the south Pacific. The Archives New Zealand holds the “original” paper and parchment documents which make up the Treaty of Waitangi.

A second nation-wide referendum was held in 2016 on a choice between the existing national flag and a new version for the flag. With voter turnout at almost 68-percent and over 2.1 million votes cast, the people of New Zealand voted to retain the existing flag by a 57-to-43 margin. Other commonly seen flags for the country are described here.

I made composite photos above of the display representing the Treaty of Waitangi display at the national Te Papa Museum in Wellington, New Zealand on 13 October 2010. First appearing here, the present post appears on Fotoeins Fotopress at fotoeins.com as http://wp.me/p1BIdT-9od.