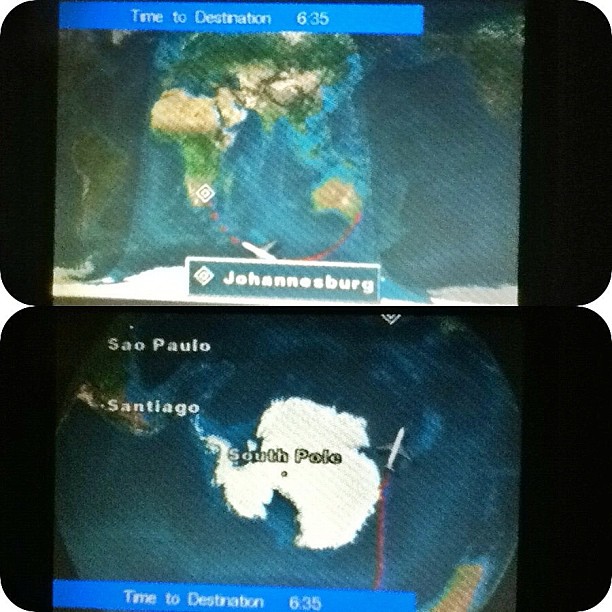 On a plane again: it’s either a prayer or a curse.

I summon the sleep gods on this 14-hour flight, and going over this very large body of water seems like an eternity.

Over the last few years, I’ve become accustomed to 10-hour “shuttles” between Chile and the United States, and I’ve trained mind and body to divide 10-hour flights into three easy-to-digest chunks between take-off and landing: (1) dinner; (2) an attempt at sleep, movies, or reading; and the final third that is (3) breakfast.

But it’s always been the case that the extra flying hours beyond the 10 mark can be a big mental block.

Sometimes, the goal is the motivation. On this 14-hour flight, Cape Town is the destination.

Qantas flight 63 is a non-stop flight from Sydney, Australia to Johannesburg, South Africa, and it’s at the latter where I’ll transfer onto another plane to Cape Town.

This ‘marathon’ flight takes place mostly over the Indian Ocean, the third largest on the planet.

About halfway into the flight, I’m standing in the rear galley of this jumbo jet plane, and I’m looking out the window. The optics through the window are weird, giving a weird warped view of the world outside. I’m leaving nose prints on the interior plexiglass screen.

Sure enough, there it is.

Peeking under cloud cover is a hint of land below.

Under the rippling deck lies the great southern continent of Antarctica.

That’s what the plane’s in-flight displays say, too.

Our plane’s path glances over the continent of Antarctica; the display helpfully supplies geographic information, locating Argentina, Brazil, and Chile as well.

How do I feel?

There’s loss, too. I’m not going to see Antarctica on this trip, and I have no plans to do so in the near future.

After 5 years in Chile, what I miss most are the people with whom I worked, my friends and colleagues. Perhaps this “near miss” is a reminder, that I should return to South America sometime soon in the future.

Approaching South Africa, I’ve just departed Australia, after ten weeks among friends in some of the most beautiful spots around. I feel loss and separation from friends and country.

As sure as I’m moving forward on this around-the-world journey, I’m confident I’m coming back someday soon.

On board Qantas flight QF63 SYD-JNB, I made the photos above on 10 October 2012 with a 4th-generation iPod Touch. This post appears on Fotoeins Fotopress at fotoeins.com as http://wp.me/p1BIdT-5q0.

At Australian airports, passengers on domestic flights are allowed to pass through security from “landside” to “airside” without a boarding pass in hand. Having become accustomed to travel in North American and European airports, Australia’s policy is both refreshing and startling.

And it saved my butt.

It’s 31 August 2012, and I check out at 10am from my apartment in Melbourne’s Central Business District (CBD). With my Qantas flight to Sydney at 9pm, I’m looking forward to getting some work done in the airline’s lounge at the airport. I’ve maintained Platinum status with American Airlines, which is equivalent to Sapphire on oneworld. My present frequent-flyer status qualifies me to use their Qantas Club lounge in the domestic terminal.

I’m not in any rush, and I arrive just after 11am at Melbourne airport’s Terminal 1, thanks to Skybus‘ shuttle pickup from the CBD to Southern Cross train-station and their coach service from the train-station to the airport.

I’m unable to check-in to my flight at one of the many computerized check-in booths. A couple of customer service agents provide some help, and they tell me that my flight (scheduled to leave in 10 hours time) is not yet open to check my luggage. I’m not really surprised by this.

I want to use the lounge which can only be accessed airside (post-security), and I can’t walk on through airside, because I’ve a number of items which must go into checked luggage. Am I going to lug around my 20-kg (44-lb) piece of luggage for the next 10 hours? That would be a big fat NO.

So now I have two issues:

I ask around about storage, and I walk over to the arrivals level of the international terminal (T2) next door, where my luggage is put away into storage for up to 8 hours at a cost of $12 AUD. I can live with that.

I return to the T1 domestic terminal, and head on up to the security-screening area on the departures level. Within minutes, I’m airside. It’s important to note here that I still have NOT checked into my flight, and I don’t have a boarding pass, but I’m sitting in the Qantas Club lounge, where I start typing up this present article.

430pm rolls around, and I reverse the process.

I step back out landside (pre-security), fetch my luggage from storage, check-in successfully for my 9pm flight, retrieve my boarding pass, and my luggage is off on its merry way to the plane. I go back through airside, and return to the Qantas Club lounge.

The seat in the Qantas Club lounge I vacated about an hour ago (to check-in to my flight) remains empty, as if it’s “waiting” for me. But this time, I’m going to have ham, cheese, salad, and soup for a light dinner, courtesy of the lounge.

Time comes around to board, it’s a short walk to the gate, and it’s an easy 1-hour-25-minute flight to Sydney, where CityRail awaits for the return trip to the place where I’m staying.

The call to Europe, indeed Germany, had been getting louder.

But I had to travel from Australia to Germany with a brief week-long stop in Cape Town, South Africa. In all, I would travel halfway around the planet in a span of two weeks.

I’m catching up with friends who’ve recently moved from the United States to Sydney, Australia. We go between Dee Why and Manly, two beach suburbs north of Sydney’s Central Business District.

Qantas flight 63 is a non-stop flight from Sydney, Australia to Johannesburg, South Africa. I realize the flight path (re. shortest distance between the two cities) skirts around Antarctica – that’s pretty cool, considering having lived in Chile for five years. 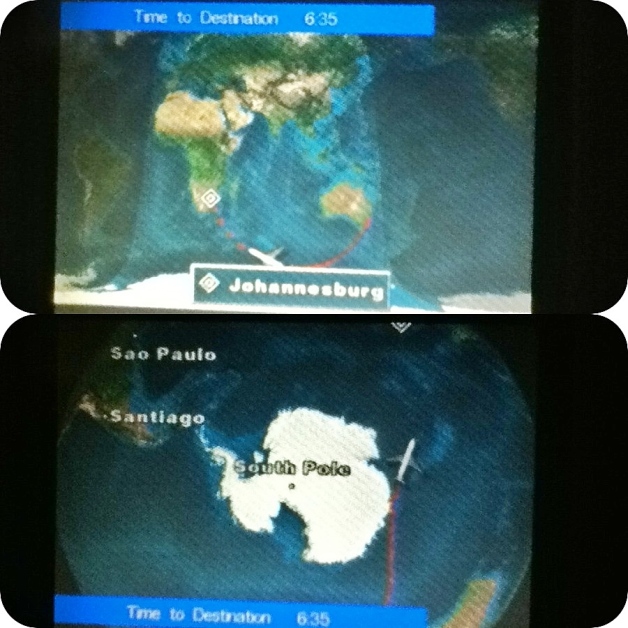 I’m standing on top of Table Mountain in Cape Town, South Africa. It’s very windy on the summit, and while the predominant wind is southeasterly, moisture has not precipitated on the “table” to form the famous “tabletop” cloud- or fog-deck. The latter would form the following day.

British Airways flight 58 is a non-stop flight between Cape Town, South Africa and London Heathrow. The flight path takes the plane directly over the Sahara desert.

It’s an unusually warm fall day, and I’m taking advantage of the weather with a walk around Friedrichshain-Kreuzberg in the German capital city of Berlin.

I made the photos above with a 4th-generation iPod Touch and with a Canon EOS450D. This post appears on Fotoeins Fotopress at fotoeins.com