Innsbruck’s north perimeter is bounded by the rock wall that is the Northern Chain mountains or Nordkette. Fortunately, a combination of funicular and cable car is easily accessible in the city to all who wish to reach the Hafelekar summit on the Nordkette. At an elevation of about 2300 metres (7546 feet) above sea level, there’s a sweeping south view over Innsbruck city, Inn river valley, Bergiselschanze (Bergisel ski jump), Europabrücke (Europe bridge), and the mountains beyond.

Located about 1 km north of the town of Scheffau, the Jägerwirt vacation guesthouse and accompanying restaurant sit at the western foot of the Wilder Kaiser mountain range. The image shows a north-facing view of the lodge framed by a big stone vertical wall with peaks Kopfkraxen (2180 m), Sonneck (2260 m), Treffauer (2306 m), and Tuxeck (2226 m). The motto here is “Genuss mit Weitblick” (enjoyment with vision), and the soothing view from altitude goes well with cold beer and a massive Schnitzel to end a good visit and day-trip to the Wilder Kaiser region.

On the S-Bahn Tirol train between Scharnitz and Innsbruck, this southwest view across the Inntal (Inn river valley) reaches sight of the Northern Sellrain Mountains (Nördliche Sellrainer Berge) in the Stubai Alps (Stubaier Alpen). The “Mittenwaldbahn” railway track runs approximately parallel to Austria highway B-17 (E533). Approximate coordinates for the image are 47.28930° N 11.22701° E.

Hall in Tirol gained wealth and notoriety through the salt trade, shipping on the Inn river, and “making coin” (minting currency).

Dating to the 15th century, Burg Hasegg is a castle which also became the host site for minting beginning in 1566 with the installation of the Mint. Visible from the Hasegg tower are: Grosser Bettelwurf, Hohe Fürleg (both in the Gleirsch-Halltal Chain), and Hochnissl (Hinterautal-Vomper Chain). The St. Nicholas parish church was first established c. 1281 AD/CE with subsequent expansion and reconstruction over the centuries. The Jesuit church represented the only late-Renaissance church in Tirol and, later, the first Baroque church in north Tirol.

Located 8 km east from Innsbruck, Hall in Tirol is an easy 10-minutes with a regional train (ÖBB) or a cheaper 25-minutes with the city bus (VVT/IVB). 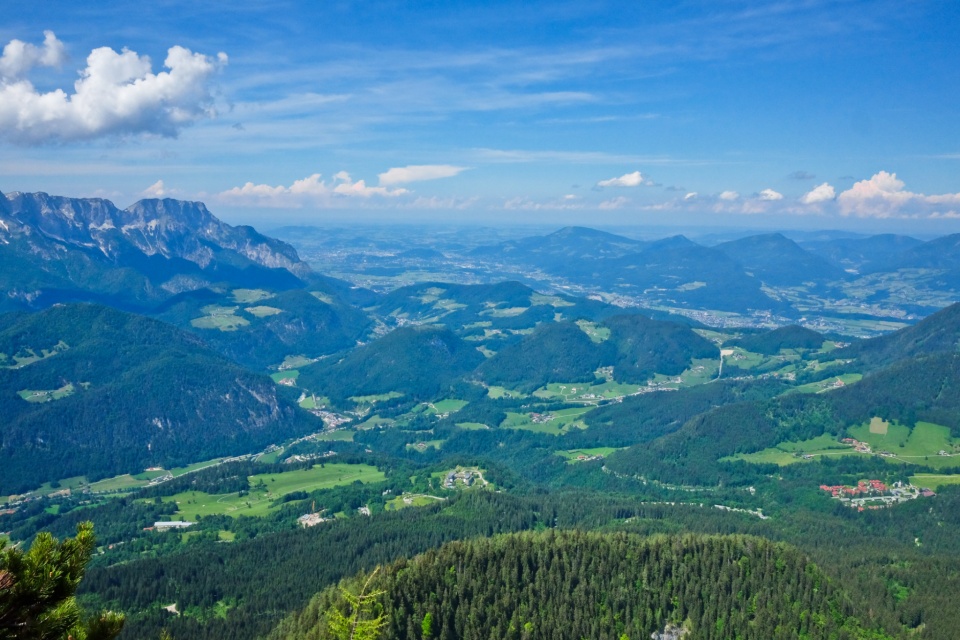 About 10 kilometres southeast from the alpine town of Berchtesgaden, the infamous Eagle’s Nest on Kehlstein is also a destination for those interested in all-encompassing views of the Berchtesgaden Alps (Berchtesgadener Alpen) from the southeast corner of Germany into central Austria. ⁣⁣I described the view south last week.

Shown above is a view north includes the Documentation Centre Obersalzberg (which explains how the Nazis’ claimed Obersalzberg for their own and the construction of the Eagle’s Nest on Kehlstein mountain), Untersberg mountain in the distance at the Austro-German border, and the Austrian cities of Hallein and Salzburg along the Salzach river. Also visible are roads connecting Salzburg and Hallein with Berchtesgaden. This wedge of land was once busy and rich with activities for the “white gold”: there were salt mines (e.g., in Berchtesgaden and Hallein), salt barge transports on the Salzach river, and the sale and exchange of salt for goods.