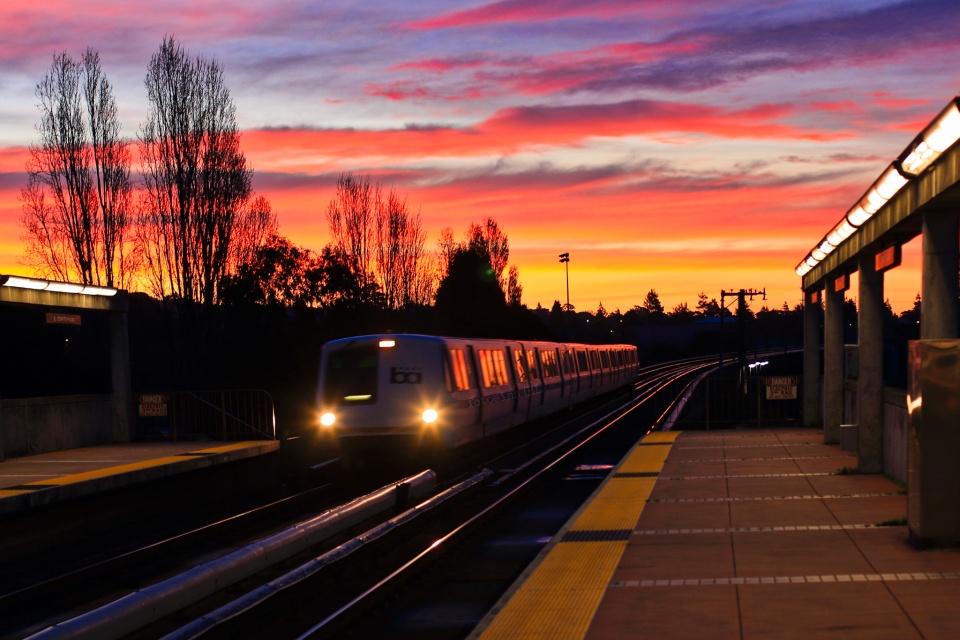 I’m in the Bay Area in northern California. After leaving behind years of science, I didn’t know what was in store for the future, except a year out on the road, fixed only by an RTW-ticket itinerary. At daybreak on New Year’s Eve day, I accompanied a friend who was flying from San Francisco airport back to family home in Canada. We began at Bay Area Rapid Station (BART) station El Cerrito Plaza, where I made this image of an incoming BART train in front of a spectacular early-winter morning sky. I took this visual as a good sign of things to come.

In March 2012, I visited Ocean Beach in San Francisco, Caifornia. What’s left of the Sutro Baths invite people to walk in, through, and around the ruins. A benefit to visiting, even on a very windy day, is the proximity to the water, the Pacific Ocean.

Standing a few metres away from the water, I saw a woman standing alone in front of the surf. Although it was windy and some surf was reaching the ruins, the woman stood still for minutes, looking out into the ocean.

Briefly, I feared she was contemplating a jump into the ocean. But my fears were unfounded, as she eventually walked away and back up the slope towards the parking lot.

Whatever she was thinking, I hope she found what she was looking.

I made this photo at Ocean Beach in San Francisco on 18 March 2012. This post appears on Fotoeins Fotopress at fotoeins.com.

The following set of pictures provides short looks at the City by the Bay at the end of 2011 and into the beginning of 2012.

END_OF_DOCUMENT_TOKEN_TO_BE_REPLACED

I made this photo while traveling southbound on the Golden Gate Bridge on 1 January 2012 with the Canon 450D (XSi) camera and the EF 50/1.4 prime-lens. This post appears on Fotoeins Fotopress at fotoeins.com.