In north-central Austria, the town of Hallstatt is famous for its long-standing history of salt making, for which UNESCO recognized as World Heritage Site in 1997. The town is “squeezed” between Hallstatt Lake and the Dachstein mountains encircling the lake. Hallstatt can be reached by car and bus, but not directly by train. The tiny train station is on the opposite side of the lake, and a small shuttle boat transports passengers across the lake between train station and town. Aboard the gentle ferry ride at 740am, the vista shown here is framed by Zwölferkogel (1982 metres) and Vorderer Hirlatz (1934 metres) in the background, along with the town’s buildings including the Evangelische Pfarrkirche (Evangelical Parish Church) at right.

After a mid-May morning in the Alpbach alpine valley, I spent the afternoon on rail to Brenner via Innsbruck, with both legs of the Innsbruck-Brenner stretch on the S-Bahn Tirol S4 train. I used my Eurail Pass the entire day.

Squeezed between the Stubai- and Zillertal-Alps in the Wipptal (Wipp valley), Brenner Pass stands at an elevation of 1370 metres (4495 feet) above sea level and is one of the lowest mountain passes in the Alps. The low mountain pass meant that humans have known about, climbed, and traversed this area for thousands of years. It’s also why the Romans incorporated this pass from the 2nd century AD/CE as a part of a critical north-south trade and security link between the heart of the empire to the south and the frontier provinces to the north.

By the Middle Ages, the pass was a part of the Holy Roman Empire on the “Via Imperii”; this imperial road stretched from Rome to Stettin via Florenz, Verona, Innsbruck, Augsburg, Nürnburg, Leipzig, and Cölln (Berlin). In the mid 15th-century, most long-distance trade between Augsburg and Venice was transported through Brenner Pass; by the early 16th-century, a north-south postal route was founded.

Empress Maria Theresa of the Habsburg Empire ordered in 1777 an upgrade and development of the road through the pass to mitigate the dangers of summer landslides and winter avalanches on the important trade route. Recognizing good timing and an opportunity, German writer Johann Wolfgang von Goethe travelled through Italy between 1786 and 1788, fulfilling a lifelong dream. Goethe would have started from Munich and travelled on the road for two days with a stop in Innsbruck before entering Italy. From his notes, he published in 1816 “Italian Journey” which became a best-selling book of its time and paved the way for Germans to satisfy their romantic dreams by travelling to Italy. The Brenner Railway line was inaugurated in 1867, heralding a faster connection between Innsbruck and Bolzano and the first rail line through the Alps. Construction of the 38-kilometre Brenner Autobahn between Innsbruck and Brenner Pass began in 1959 and by April 1971, drivers got to experience the full width of a speedy highway, now known as the A13 in Austria and E45 in Europe.

From its origins, the road today is a vital link between northern and southern Europe, providing trade shipments by truck and rail transports. Concern about environmental impact by record numbers of trucks (about 2 million every year#) is also why the European Union initiated construction of the Brenner Base Tunnel to divert more freight onto rail and further cut rail journey times between Austria and Italy by about an hour.

It’s difficult to imagine a time in the recent past where this border was heavily guarded and all traffic was stopped and checked, with stories of smugglers secretly climbing over the border mountains in the dark and stories of death from exposure and misadventure. With Austria’s formal acceptance of the Schengen Agreement and entry into the Schengen Area, all border controls here were abolished on 1 April 1998.

Separate European nations with unguarded borders was once thought impossible. It’s a modern idea that cannot be underestimated and for which I’m thankful: I arrived by plane in Frankfurt, Germany where I entered the European Union. Because Germany, Austria, and Italy are within the Schengen area, I was able to travel freely among these nations. From Stazione Brennero, I walked out into town and across the border from Italy to Austria and back again, without checks or controls.

# 2 million trucks per year, 5500 per day, or about 230 per hour. Delivering goods is an important economic engine, but that’s a lot of trucks, noise, and exhaust.

END_OF_DOCUMENT_TOKEN_TO_BE_REPLACED

You can’t escape the mountains in Austria’s Tirol: not that I would, because why would anyone want to miss out on any of this natural beauty. An easy trip by bus or tram (Stubaitalbahn STB) from Innsbruck takes visitors into various towns in the Stubai valley including Neustift im Stubaital. Reaching deeper into the valley gets you to Mutterbergalm and up into the Alps near the Austro-Italian frontier. Spring activities in the area include hiking, climbing, and paragliding. This view faces southeast into town with the Catholic parish church (Pfarre Neustift at lower-centre); in the background at left-centre and upper-right are Kesselspitze (2720 metres) and Elferhütte (2080 metres), respectively.

On a beautiful spring morning, I set out from Innsbruck in a search for physicist Erwin Schrödinger. What Isaac Newton is to classical physics; Erwin Schrödinger is to quantum physics. In a modest church cemetery in the centre of Alpbach lie the graves for Erwin and Annemarie Schrödinger.

At an elevation of 974 metres (3196 feet), Alpbach is situated along the Alpbach river and nestled among the surrounding Kitzbühel Alps (Kitzbüheler Alpen). Many of the town’s buildings have traditional architecture with wood moulded and ornamented balconies. With population about 2600, key activities consist of summer hiking and winter skiing via a number of cable cars to the surrounding mountains including Wiedersberger Horn. Known also as “the town of thinkers” (Das Dorf der Denker), the 21st-century glass-and-wood construction of the Congress Centre was designed for the purpose of fostering and strengthening intra-European communication and cooperation. In the aftermath of the Second World War, Alpbach has hosted since 1945 the European Forum Alpbach, held annually in August with more than 5-thousand people in attendance.

This for me is classic Tirolean alpine idyll. Next time, I’d like to come back and stay awhile.

END_OF_DOCUMENT_TOKEN_TO_BE_REPLACED 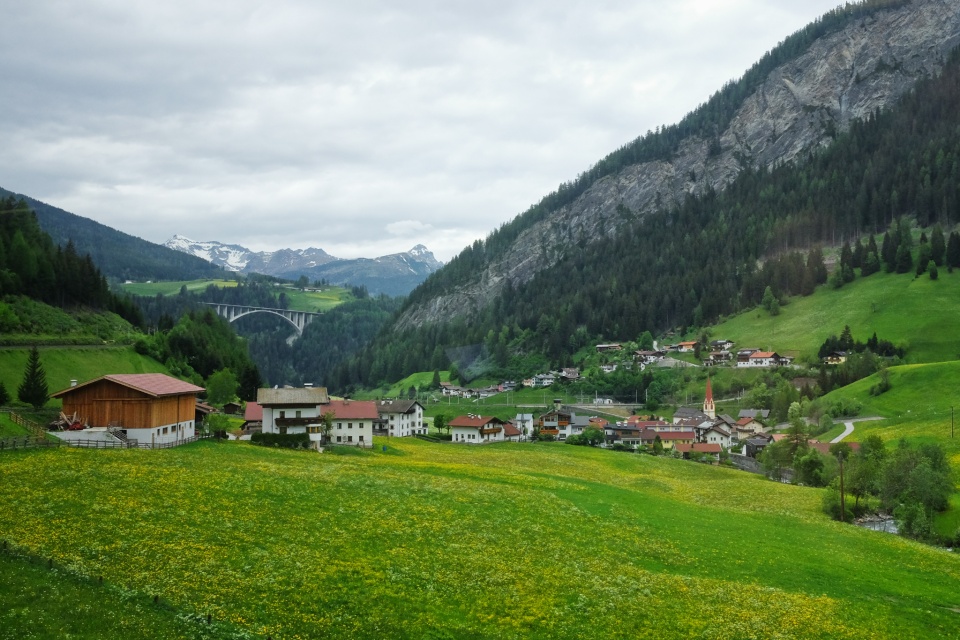 On board the S-Bahn Tirol S4 train south to Brenner, I’m bouncing from one side of the car to the other; the valley views open up one instant and another set of views open up on the opposite side. Just after departing St. Jodok, the track makes a tight turn in the small Wipptal valley. In doing so, the train slows down, and I luck out with this west-facing view; I can make out the town’s distinctive Pfarrkirche zum heiligen Jodok Catholic parish church (1427) and in the background mountains Kesselspitze (2720 metres) and Serles (2717 metres).