In thinking about things to do for free in Seattle, I thought about some of the city’s sights labelled with the letter ‘S’. There’s plenty of alliteration to follow.

I could have listed two obvious choices with the Space Needle and the Smith Tower. They are free to admire from the ground, but both require an admission charge to enter and reach the top of each respective structure for sweeping views of the city.

Here below are other arts and culture spots in Seattle that don’t cost a penny to visit or see; all locations are easily accessible with public transport.

As resident and visitor, it’s easy to be drawn by the sight of sunlight shimmering on the water’s surface and snow-capped mountains in the distance. At the shoreline, you may be met with unusual works of art. As the largest green space to open in 2007 in downtown Seattle, the Seattle Art Museum (SAM) has placed over 20 installations at Olympic Sculpture Park. 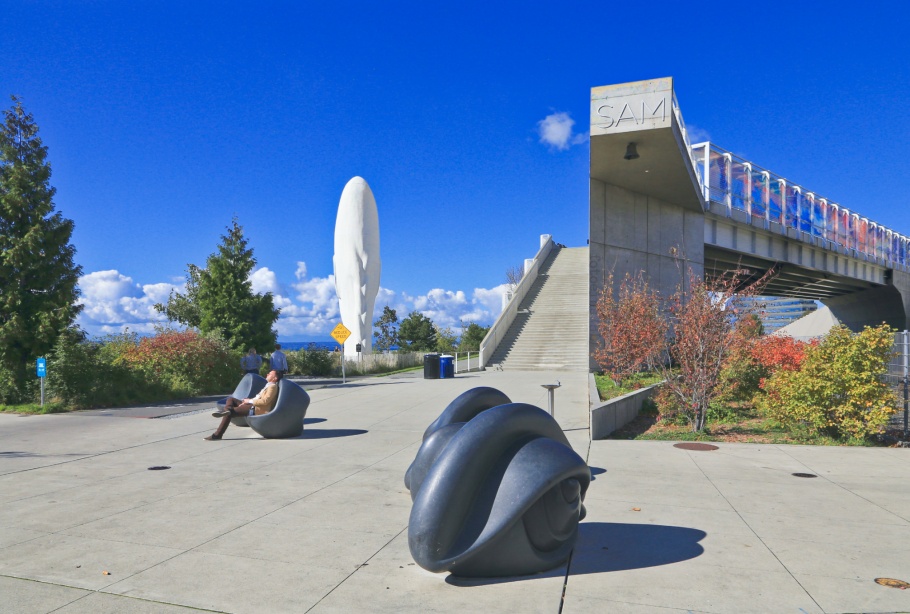 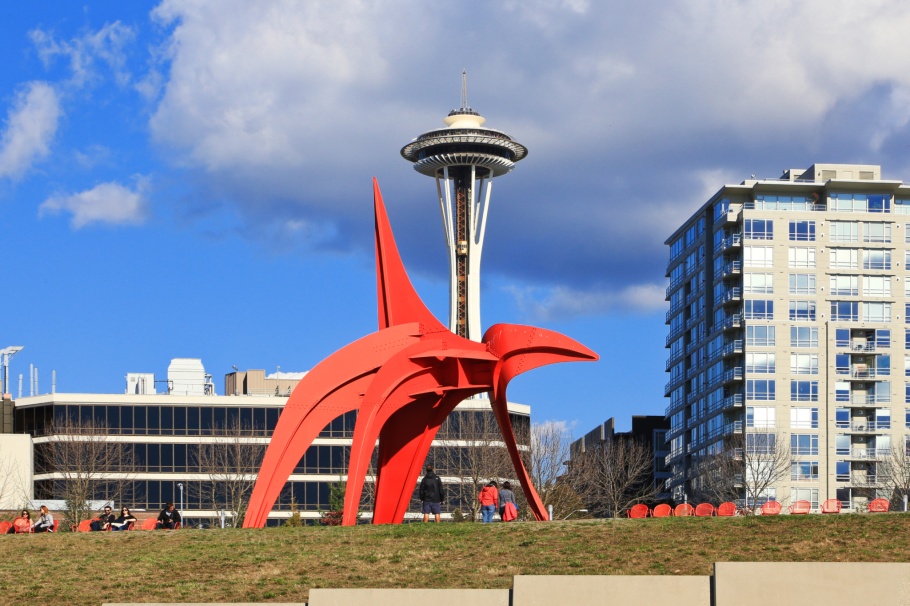 Saturn and the Rocket

Among his contributions to neighbourhood art, local property developer and property owner Brian Regan created the planet-like orb for the roof on one of his buildings in Seattle’s Fremont. Solar panels within the sculpture’s rings generate sufficient power to provide lighting for an entire floor of the building. Glowing at night, Saturn hovers near and above the adjacent 1950s military surplus Rocket, providing an impression of “space flight and exploration.” There’s more to see in the neighbourhood (The Troll, for example); after all, Fremont is the “centre of the universe.” 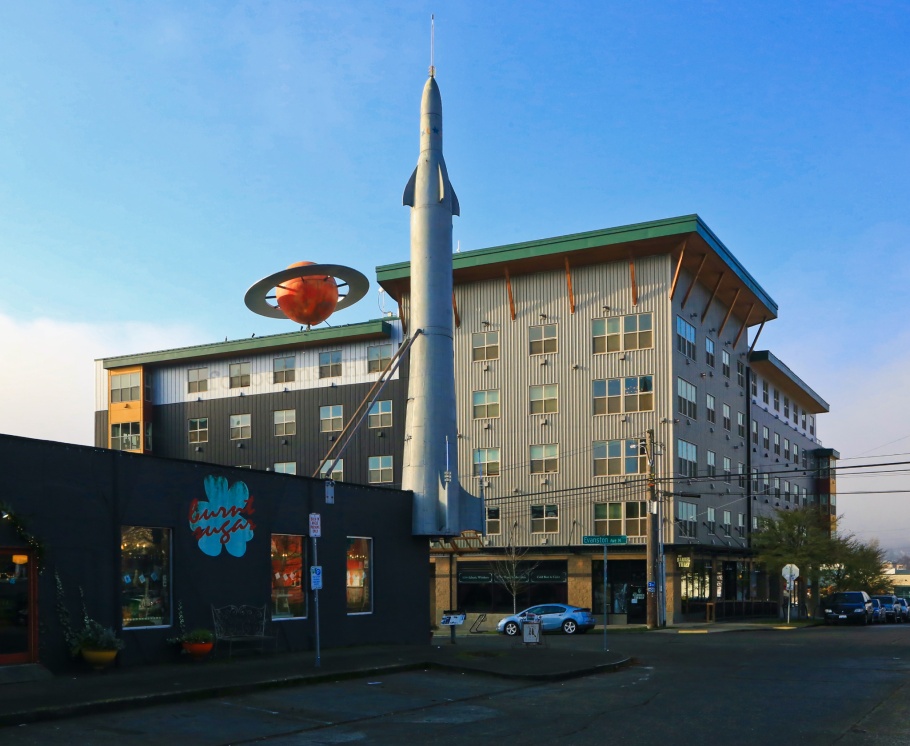 Saturn building on Evanston Street, the Fremont Rocket in the foreground, and lingering fog in morning light – 9 Dec 2017 (6D1). 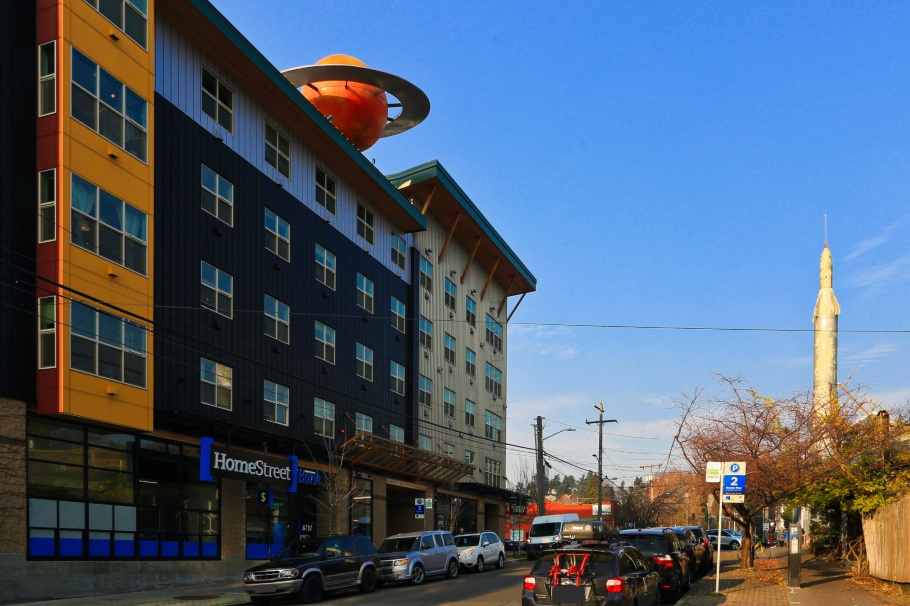 Wandering south from Seattle Center, I encounter Tilikum Place with a solemn statue of a man whose right hand is extended, as if to face and greet the unknown. Local sculptor James Wehn created this sculpture in time for the city’s “Founders’ Day” in 1912.

Siʔaɫ was the name of the chief for the Duwamish and Suquamish peoples in the early 19th-century at the time of first white settlers into the area. The word “Seattle” (Sealth) is an Anglicization of the modern Duwamish spelling “Si’ahl” that’s equivalent to the modern Lushootseed “Siʔaɫ”. Seattle is the only major U.S. city named after an indigenous leader. However, acknowledgement cannot be limited to mere individual points of sculptural memory, because the entirety of Seattle is built upon the unceded territory of the Duwamish (Dxʷdəwʔabš) people.

Where: Cedar St. and Denny Way. 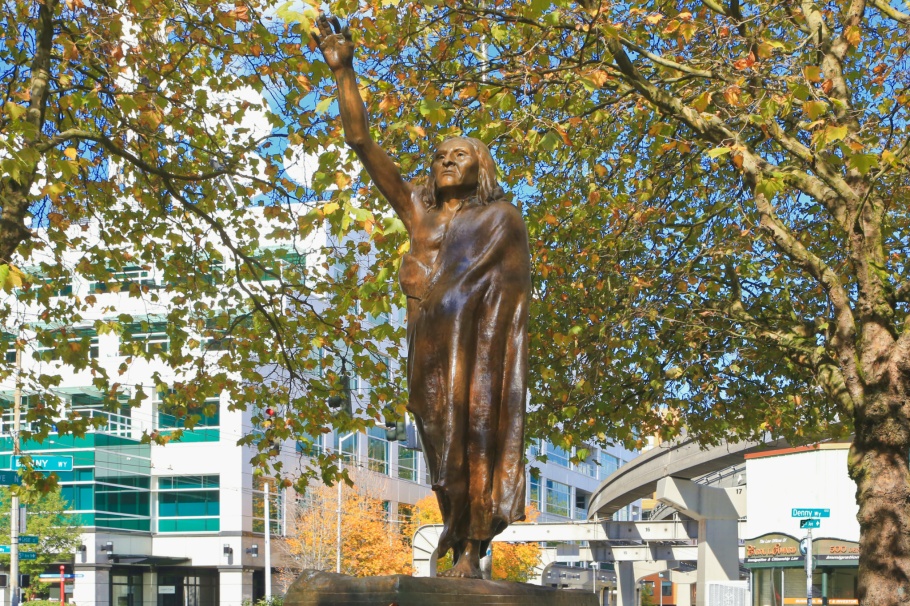 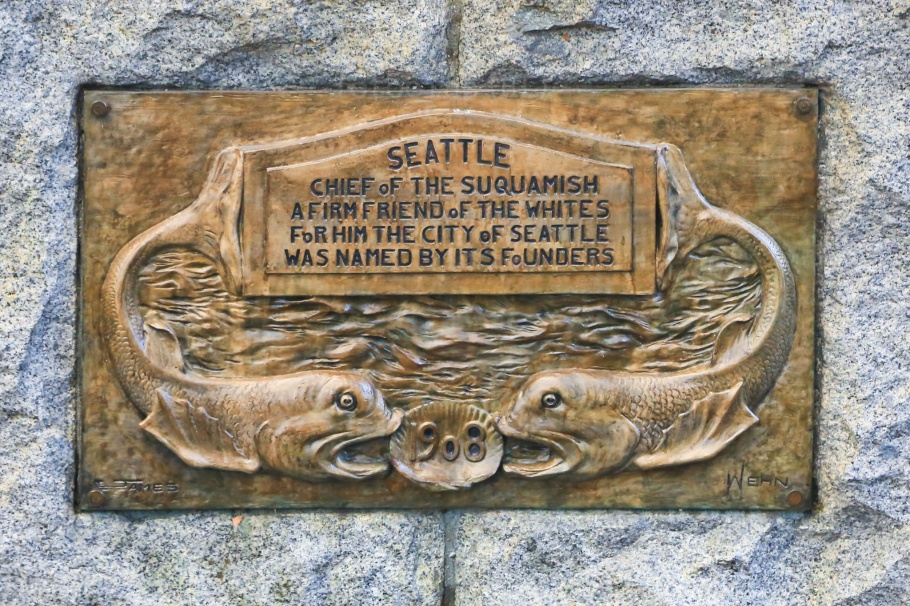 On the back wall of Bedlam coffee shop in Belltown is a beautiful 2015 wall mural called “Greetings from Seattle” created by Greetings Tour. The coffee shop may be (permanently) closed, and there may be a gate blocking direct access to the mural. But there’s a small horizontal gap in the gate which allows a visual of the mural from the sidewalk. Fortunately, the gate to neighbouring Block 41 was open during my visit.

The guide to each letter is: S for Space Needle; E for Pike Place and the former Rainier Brewery neon ‘R’ sign; A for Mariners and Seahawks; T for Pioneer Square Totem Pole, The Hammering Man, University of Washington, and coffee beans; T for Gas Works Park; L for Elephant Car Wash and Fremont Troll; E for Jimi Hendrix, Nirvana, and Sir Mix-A-Lot. Mount Rainier (Tahoma) is in the background. 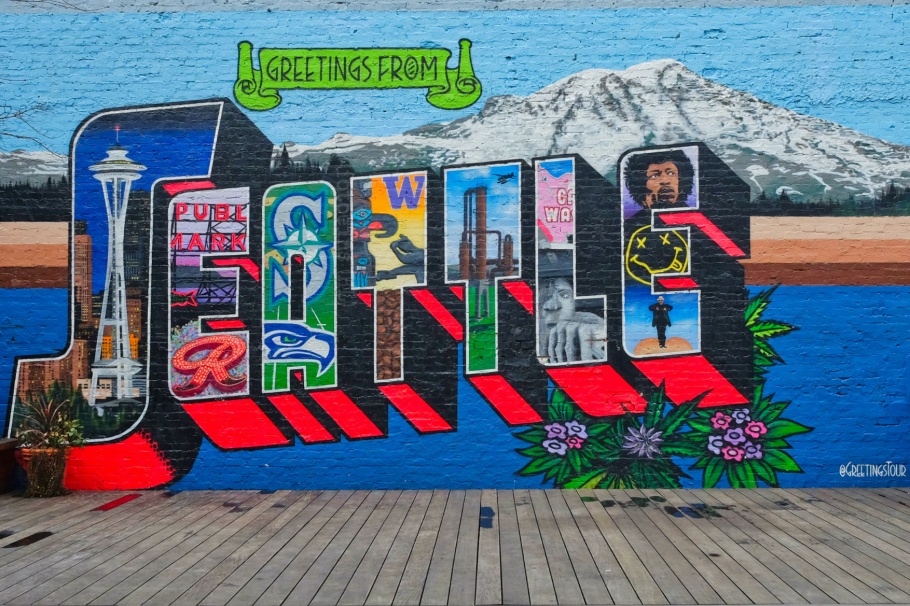 This mural is by Sign Savant, known also as Seattle artist Japhy Witte. Highlighted are historical aspects of the “South of Downtown” area (SoDo)1, including the old Kingdome, Rainier brewery, railway tracks, and the Port of Seattle.

Over a 2-mile (3-km) stretch, the work of over 60 artists is represented next to the SoDo Busway as part of the SoDo Track arts project. You can appreciate the variety of art work on foot, by bicycle, or on-board LINK light-rail service between downtown Seattle and Sea-Tac airport. 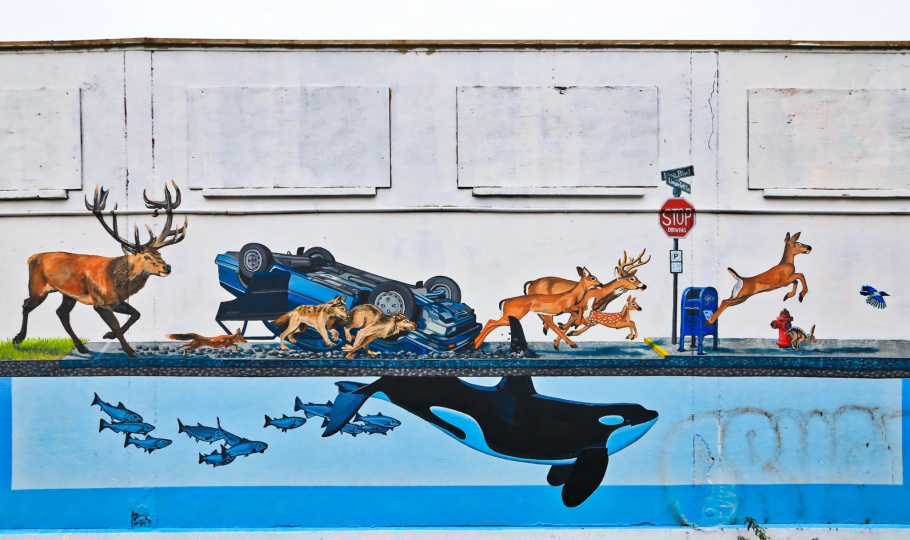 In Seattle Center next to the Space Needle is a grand sculpture by Dan Corson called “Sonic Bloom” for the Pacific Science Center. Five flowers constructed with steel, acrylic, and fibreglass stand up to 13 metres (40 feet) above the ground. The sculpture is a playful mix of both sight and sound as detection sensors emit choral tones in the presence of movement. More here.

Where: Seattle Center, between Space Needle and Pacific Science Center.

At the east end of an art walk on the grounds of the NOAA Western Regional Center is “A Sound Garden”, a 1983 sculpture by Douglas Hollis. In 1984, Chris Cornell, Hiro Yamamoto, and Kim Thayil formed the Seattle band “Soundgarden,” named after Hollis’ installation. More here about Hollis’ sculpture & access. 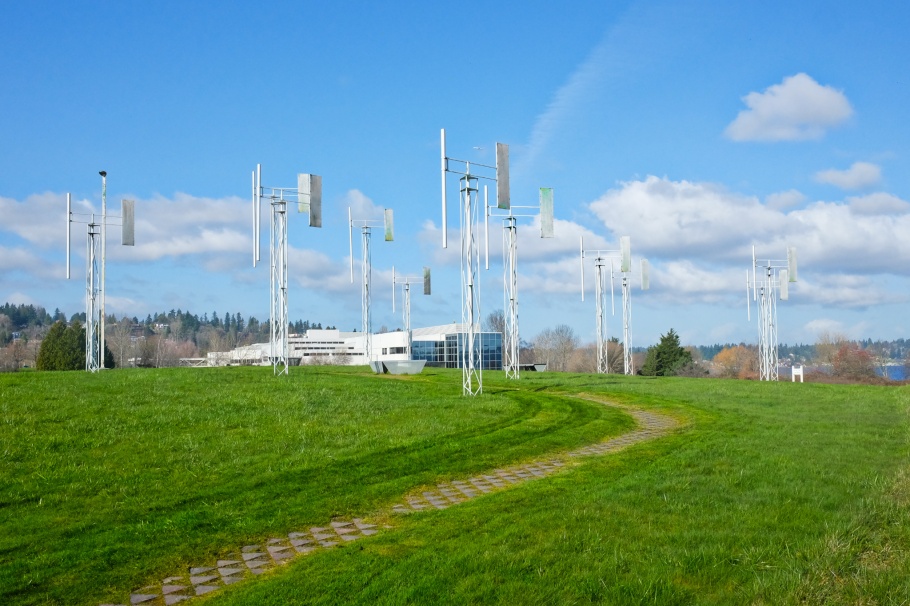 “A Sound Garden”, as part of my examination of Chris Cornell (Temple of the Dog, Soundgarden, Audioslave) in his city of birth. Image on 4 Mar 2020 (X70).

As a wonderful piece of unique modern architecture, go downtown to have a look at the Seattle Public Library’s (SPL) main or central branch. But here I cast a spotlight briefly on another branch of the city’s library.

Built in 1914 as the Yesler memorial library, the SPL renamed the library in 1975 as the Douglass-Truth branch after 19th-century American abolition leaders Frederick Douglass and Soujourner Truth. The building became a city historic landmark in 2001, with a completed expansion unveiled in 2006. Vital to the city’s black community and culture in the Central District, this library branch is also home to one of the largest collections of African-American literature in the United States. More here. 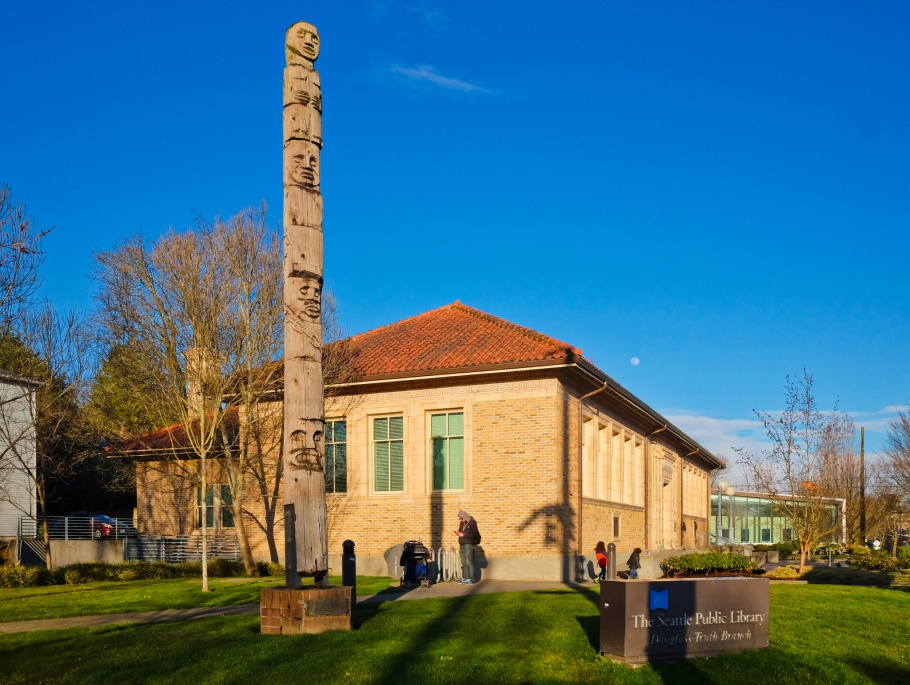 Construction began in 1923 for the University of Washington’s main library which opened in 1926. The library was renamed in 1933 as the Suzzallo Library after the death of Henry Suzzallo, who was university’s president from 1915 to 1926. With its vaulted ceiling, the Reading Room measures 20 metres high, 16 metres wide, and 76 metres long. Like a cathedral in setting, this is a secular place that honours, celebrates, and “spiritualizes” the culture of higher learning.

Where: Red Square, University of Washington. 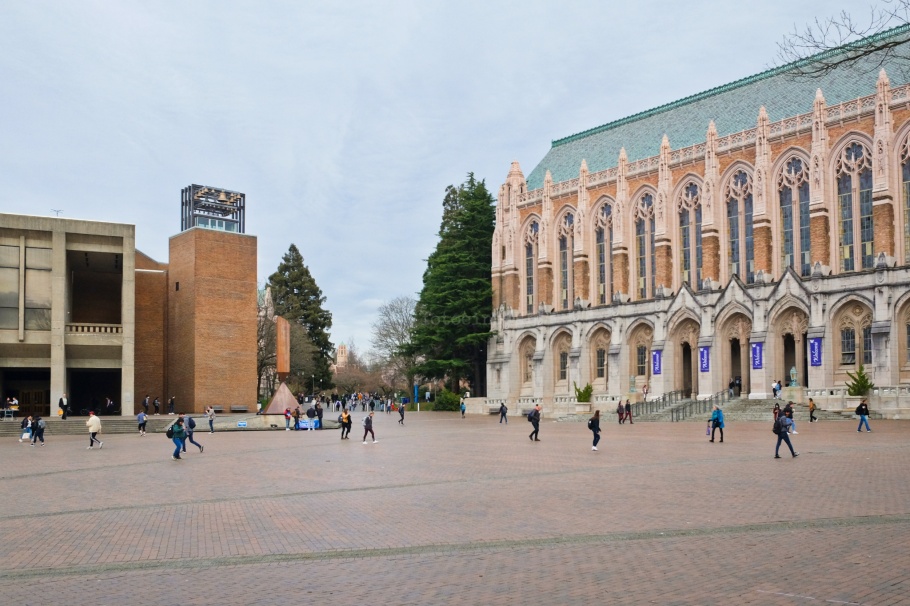 Facing northeast at Red Square: at left are Kane Hall and “Broken Obelisk” sculpture; at right is the Suzzallo Library – 5 Mar 2020 (X70). 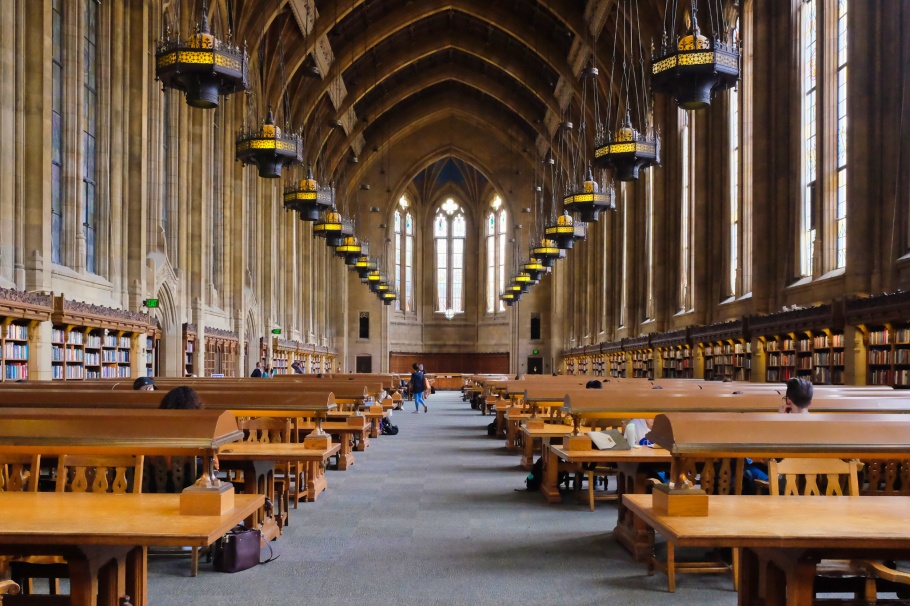 Between 2016 and 2020, I made all images above with a Canon EOS6D mark1 (6D1) and a Fujifilm X70 fixed-lens prime (X70). I acknowledge my time on the traditional and ancestral land of the first people of Seattle, the Duwamish (Dxʷdəwʔabš) People past and present, and honour with gratitude the land itself and the Duwamish Tribe. Acknowledgements to Patti for LAPC no. 136 in the week of 20-26 Feb 2021. This post appears on Fotoeins Fotografie at fotoeins DOT com as https://wp.me/p1BIdT-kmm.