In the mid- to late-1970s, our parents took us to single-screen movie theatres with names like Olympia, Golden Harvest, and Shaw for cinema night to watch movies made in Hong Kong. There were dramas; some high on the melodrama and low on character. Some were historic-period pieces, and there were kung-fu movies for which Dad passed his love to me.

There’s nothing quite like seeing a kung-fu action sequence on a big screen. I was mesmerized the first time I laid eyes on a memorable fight scene set in Rome’s Colosseum, that epic scene observed by little stone dragons between “Little Dragon” himself, Bruce Lee, and Chuck Norris’ character in the 1972 film “The Way of the Dragon“. As a kid, I was proud to have had the same surname as this Bruce fellow, and memories of seeing his on-screen characters prevailing in fights have stuck over time (e.g., “Boards don’t hit back.”)

Tragically, Bruce and his son, Brandon, died too young. I’m certain when I was a teen that I asked where Bruce Lee was buried; my parents didn’t know and in pre-internet days, it was more of a challenge to find those answers. But the mystery has long been solved: Bruce Lee and his son, Brandon, lay side by side in Lake View Cemetery in Seattle’s Capitol Hill.

Despite multiple visits to the city in years past, this particular return trip to Seattle has been decades in the making for a chance to honour a part of my childhood and a part of my heritage. When I find the Lees, my arrival means another answer has been quietly realized. On a crisp bright autumn morning under blue skies, I feel my father’s spirit with me; he never had the chance to come to this cemetery. My lips move without voice, a prayer I utter into the ether, pushing for hope to reach him. Because I know now that this, is also for my Dad.

Before entering Lake View Cemetery, I cross the street to Louisa Boren Park: a small quiet green-space with a big view. Residents are out on their morning walks; a few happy dogs are also along for the daily ritual. There are benches to contemplate scenic views of Union Bay, the University of Washington, Lake Washington, Evergreen Point Floating Bridge, and the Cascade Mountains beyond. The park was formally created in 1913 and was named after Louisa Boren Denny, one of the city’s early colonizer-pioneers in the 1851 Denny landing party which included brother Carson Boren and husband David Denny. Greeting visitors at the park’s entrance today is a 1977 steel sculpture “Lookout” by regional artist Lee Kelly. 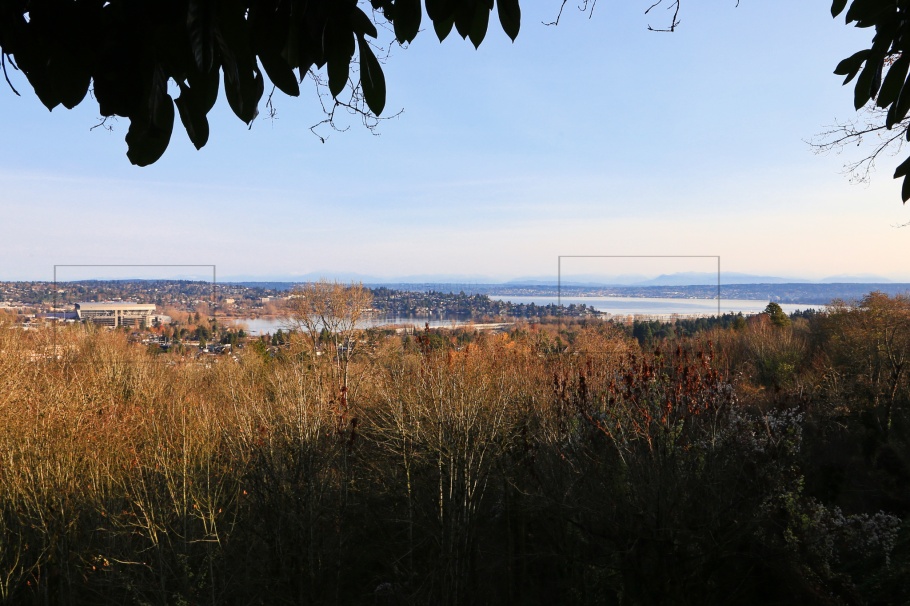 First established as the Masonic Cemetery on top of Capitol Hill in 1872, the city of Seattle changed the name to Lake View Cemetery in 1890. The cemetery includes various colonizer-pioneers associated with the modern founding of the city (e.g., Boren, Denny, Maynard, Mercer, etc.) and other historic figures including Princess Angeline, daughter of Chief Sealth; and John W. Nordstrom, founder of the Nordstrom department store chain.

We share the same family surname, and I am honoured to pay respects to these two gentlemen. Perhaps, in the distant past, our respective families might have had shared bloodlines. It’s no surprise I think about my deceased father, and about how he would’ve liked seeing the Lees here, too. I like to think my father and Bruce are having a conversation over dim sum/yum cha or bowls of noodle soup.

Not only did Bruce Lee help popularize martial arts on television and movie screens, he became a role model for Asian Americans and other people of colour with his quiet philosophy of patience, perseverance, resistance to oppression, defiance in the face of injustice, and self-determination. When Bruce began teaching martial arts in Seattle, his first student was his friend Jesse Glover who helped Bruce acclimatize to life in the United States and who later became the first authorized martial arts instructor trained by Bruce.

Bruce Lee’s daughter, Shannon, recently spoke about the ESPN 30-for-30 documentary “Be Water”, her father’s legacy, and what she believes he would’ve wanted the world to be.

Naturally, there are lots of online videos about Bruce and Brandon, but I’m very fond of “Why so many black people love kung fu” which includes a short history of Hong Kong’s kung fu cinema scene.

Bruce Lee was widely known as 李小龍 with “小龍” as “little dragon”.

“Because we don’t know when we will die, we get to think of life as an inexhaustible well. Yet everything happens only a certain number of times, and a very small number really. How many more times will you remember a certain afternoon of your childhood, an afternoon that is so deeply a part of your being that you can’t even conceive of your life without it? Perhaps four or five times more, perhaps not even that. How many more times will you watch the full moon rise? Perhaps twenty. And yet it all seems limitless.” For Brandon and Eliza, Ever Joined in True Love’s Beauty. 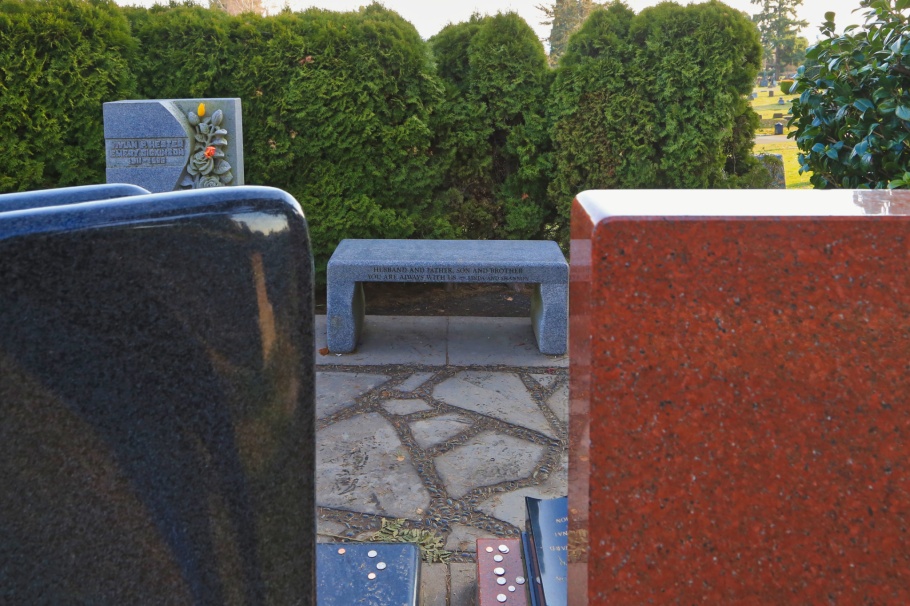 In front of the Lees are the graves for Vivian Dickinson and Willard Dickinson and a granite bench. The bench has an inscription from Linda (Emery) Lee Cadwell (Bruce’s wife) and Shannon Emery Lee (Bruce and Linda’s daughter): “Husband and father, son and brother: you are always with us.” 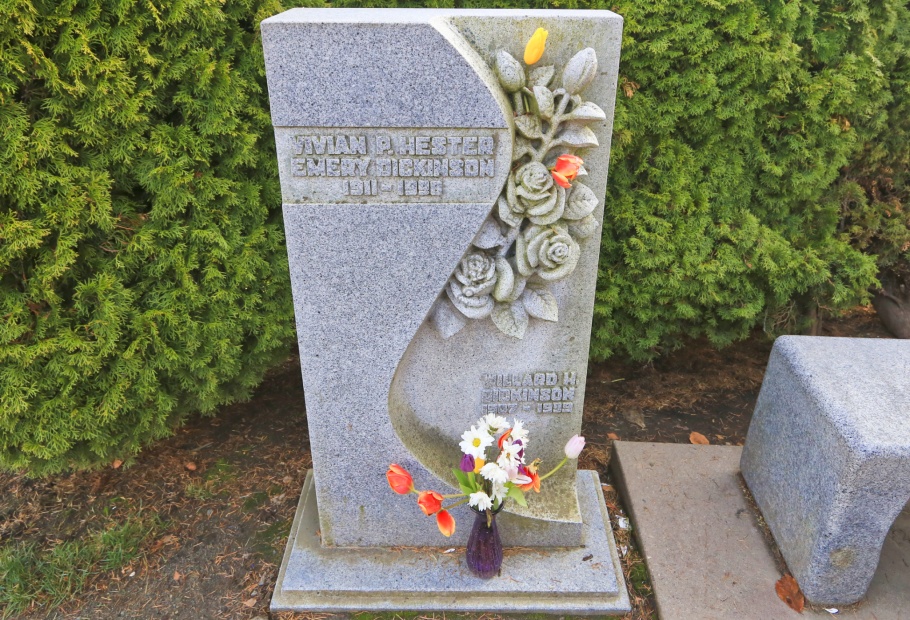 Facing northeast: the Lees’, tall shrubs, and view beyond to Lake Washington in the distance.

With this last look at their graves and the cemetery, I feel I’m leaving a little bit of myself behind. It’s not loss but gratitude, for the way I felt as a kid when I watched Bruce Lee on the big-screen, and for the memories I have whenever I catch “Enter the Dragon” on the little-screen.

With public transport from downtown Seattle, take the LINK Red line (line 1) light rail to Capitol Hill station. Ascend to street level, turn east from Broadway and walk 60 feet on the south side of John St. to bus stop “E John St/Broadway E“. Board bus route 10 northbound to its final stop at “15th Ave E/E Galer St“. Walk north 500 feet to the cemetery entrance on the left; Louisa Boren Park is a little farther ahead to the right on the other side of East Garfield Street. Bus 10’s penultimate stop at “Grandview Pl E/E Garfield St” gets you a little closer to the cemetery entrance. Alternatively, in downtown Seattle, go to bus stop “Pike St/4th Ave” to board bus 10 northbound to the route’s penultimate or final stop as described above.

Admission to the cemetery is free; check the updated hours at the Lake View Cemetery Association website.

I acknowledge my time on the traditional and ancestral land of the first people of Seattle, the Duwamish (Dxʷdəwʔabš) People past and present, and honour with gratitude the land itself and the Duwamish Tribe. I made all photos above on 10 December 2017 with a Canon EOS6D mark1 with 24-105 and 70-300 glass. This post appears on Fotoeins Fotografie at fotoeins DOT com as https://wp.me/p1BIdT-8Y8.