Above/featured: Grouse Mountain looms over a cricket match at Upper Brockton, with the bowler delivering from the mountain end to the pavilion end.

Is Vancouver home to the “most beautiful cricket ground in the world”?

It’s not typical 21st-century sport in North America, but it is Canada’s first summer sport. Many of cricket’s practitioners in Vancouver’s picturesque Stanley Park have roots from India and Pakistan; among them the shouts of “shabash” are heard often during play.

In childhood, I was enamored with baseball. With its similar origins, I discovered cricket with time spent in Australia, New Zealand, the Bahamas, and South Africa. The natural connection is the former British Empire. I began with T20, the shortest format of the game; with curiosity and time, my hunger encompassed the 50-over one-day format (ODI). It’s my start with the short white-ball format that I’ve developed an appreciation for the long format of the game with red-ball Test cricket.

In 1867, cricket was declared in Canada as the nation’s first national sport. In fact, the oldest international fixture in cricket took place in New York City’s Manhattan in 1844 between two teams: the “United States of America” and the “British Province of Canada”.

A mere 2 and 5 years after Vancouver incorporated as a city, Stanley Park was established in 1888, and cricket was first played at the park’s Brockton Oval in 1891. In 1914, the Brockton Point Cricket Club was 1 of 7 founding members of what is now the British Columbia Mainland Cricket League (BCMCL).

Each summer in greater Vancouver, hundreds of players take part in modified one-day cricket within the BCMCL organization. In the summer of 2019, there were 10 weekend-match divisions (Elite, Premier, 1st to 8th inclusive), 2 junior divisions (U13 and U16), and 2 T20 midweek-match divisions for a total of 120 teams in play. By my count, that’s about 1000 people, including players, managers, auxiliary staff, and administration.⁣ A large fraction of players are immigrants or children of immigrants from the Indian subcontinent (India, Pakistan, Bangladesh).

If hockey and baseball are a modern beat representing Canada and the U.S., respectively, cricket may well be the heart and soul of South Asia. And that’s why cricket cannot be rejected, because that attitude is lazy and ignorant, and dismissive of Canadian immigrants from South Asia.

Visitors to Stanley Park stop in their tracks. You can see by their body language and by the look in their eyes that they’ve discovered something they’ve never seen before. The green space is completely open, and at Brockton Oval, there are two flat oval pitches: a “lower” pitch, and an “upper” pitch on a small ridge whose open northern end faces a saltwater inlet and mountains.

Google Maps, north at top: at the east end of Stanley Park is Brockton Oval with the cricket pitch and wicket for Upper- and Lower-Brockton, respectively.

Cricket at Brockton Oval, facing south to the city proper. Photo between 1890 and 1910, by unknown photographer. City of Vancouver Archives: CVA 1376-177.

Facing north to the North Shore mountains at what is now Upper Brockton: a club match between Brockton Point and Burrard. Photo on 18 June 1938, by Stuart Thomson. City of Vancouver Archives: CVA 99-2920.

Australia’s cricket team toured Canada in 1932 with a stop at Brockton Oval. Later, Australia cricket legend Don Bradman would recall his time in Canada and called Brockton Oval “the most beautiful cricket ground in the world”. 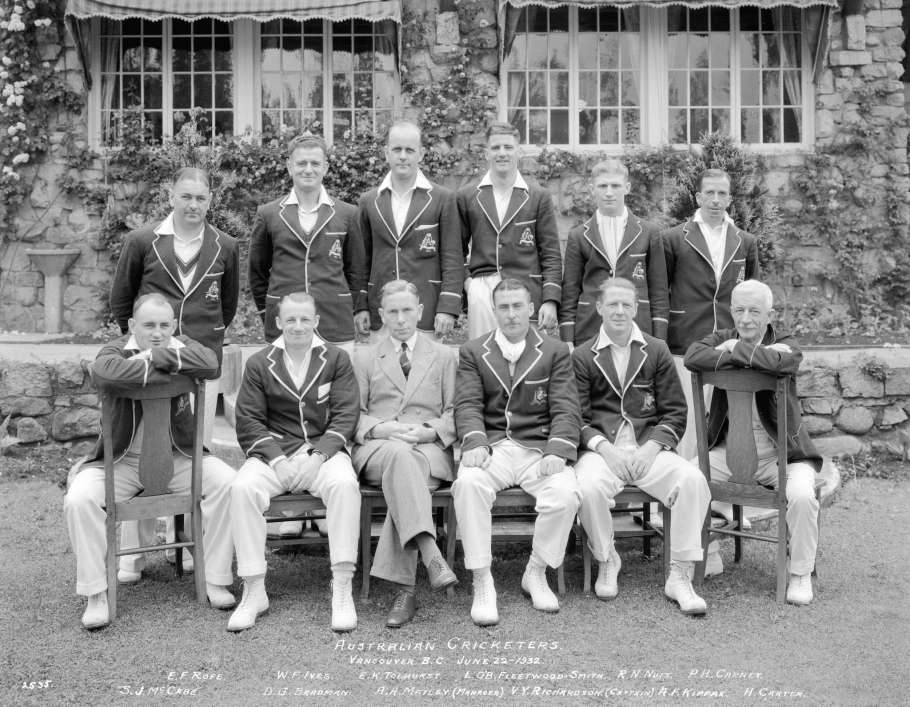 Upon finally discovering weekend cricket in Stanley Park, I spent a warm summer Saturday afternoon at Brockton Oval. I fired off hundreds of frames, curious about the way light struck the ground, about the people on the pitch, and about the order of play. Inside the pavilion, I sat next to historical clippings and images of this very ground, accompanied by a cold tap-beer and a cheeseburger fresh from the grill.

I’ve enjoyed watching the limited-overs cricket league match between two club sides on a summer Saturday afternoon, but I also got to meet and chat with some of the players, friends of players, and curious onlookers, sharing various experiences with the game.

There are hints to some fascinating stories. A young ethnic-Chinese cricket player born in India relays his time learning cricket as a boy, before he and his family moved to Vancouver about a decade ago. We converse in Canadian-English, while he’s cheering on his teammates in Hindi slang: “shabash shabash!” 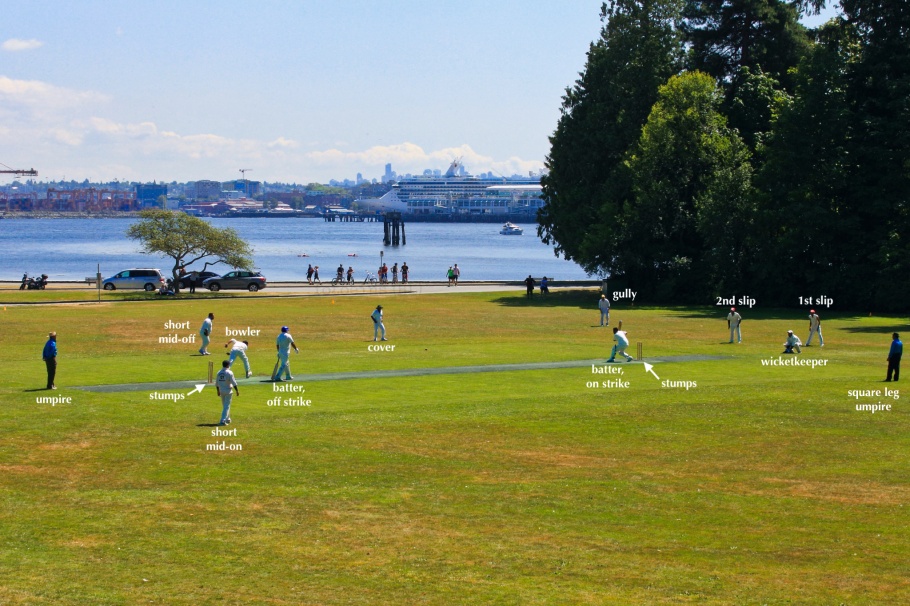 Lower Brockton, pavilion-end facing south to city-end. BCMCL 2014 3rd Division match, Abbotsford IV vs. Okanagan Royals I. The remaining 3 players on the fielding side are outside the field of view. 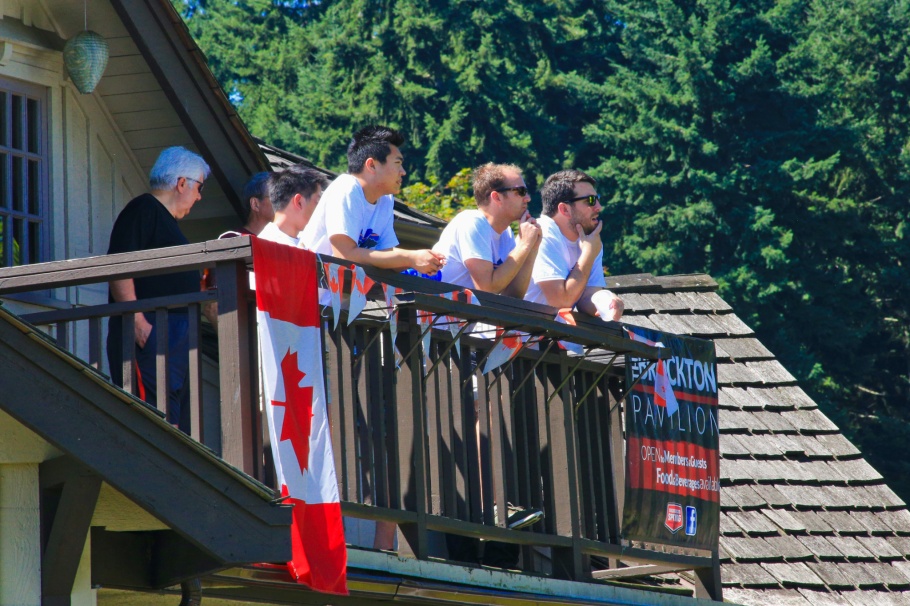 Looking on from the pavilion balcony, with burgers and beer. 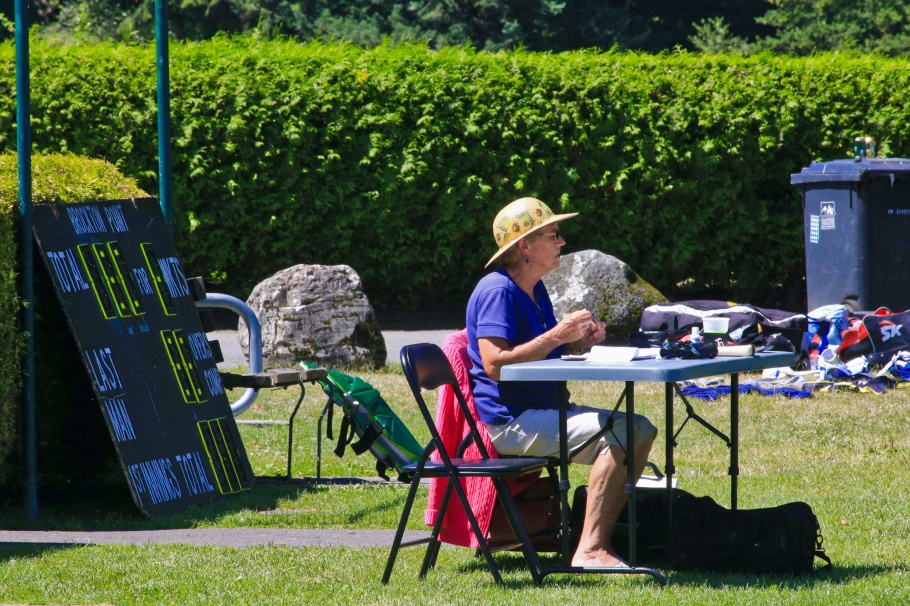 This young lady was the scorekeeper for the match at Upper Brockton.

Upper Brockton, facing north from pavilion-end to mountain-end: unoccupied wicket during the innings break, with one bail off the near stumps.

Lower Brockton: the on-strike batter (lower left-centre) has played a shot directly to the hands of the fielder at short mid-wicket (centre); the batter is “out caught”. BCMCL 3rd Div match, Abbotsford IV vs. Okanagan Royals I. 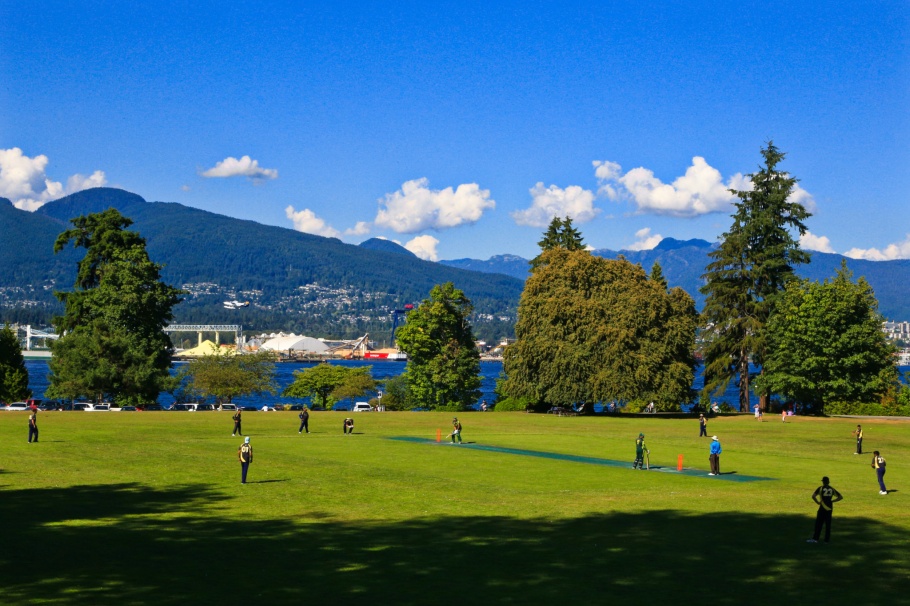 North-facing view of Upper Brockton from pavilion balcony. A Harbour Air seaplane flies over the waters of Burrard Inlet and past the ubiquitous mound of yellow sulphur at North Vancouver Sulphur Works. 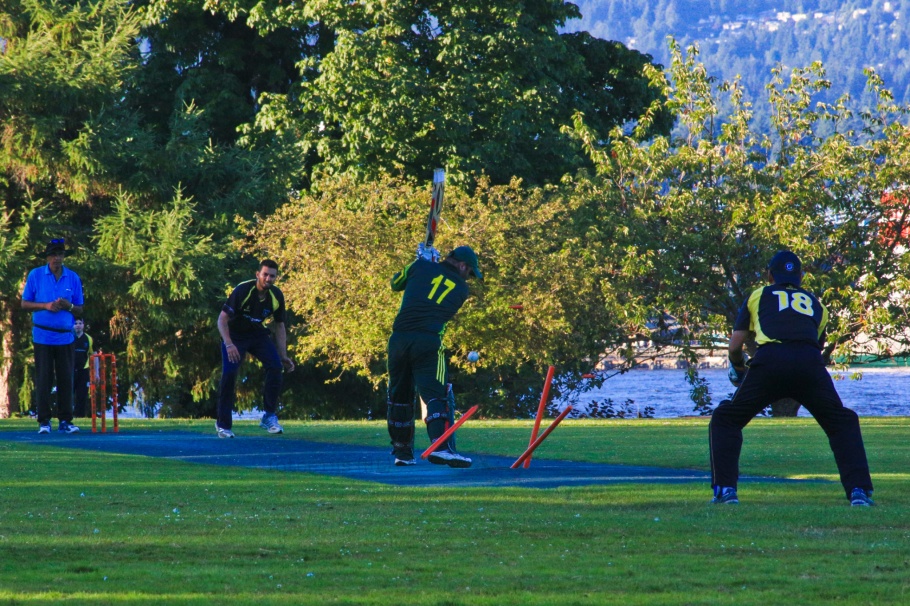 Upper Brockton: batter for Salim Akbar I is “out bowled” for failing to protect the wicket, as the delivered ball has hit the stumps, releasing the bails into the air. BCMCL 2014 Elite Division match: Salim Akbar I (green, batting) vs. Richmond I (dark blue, fielding). 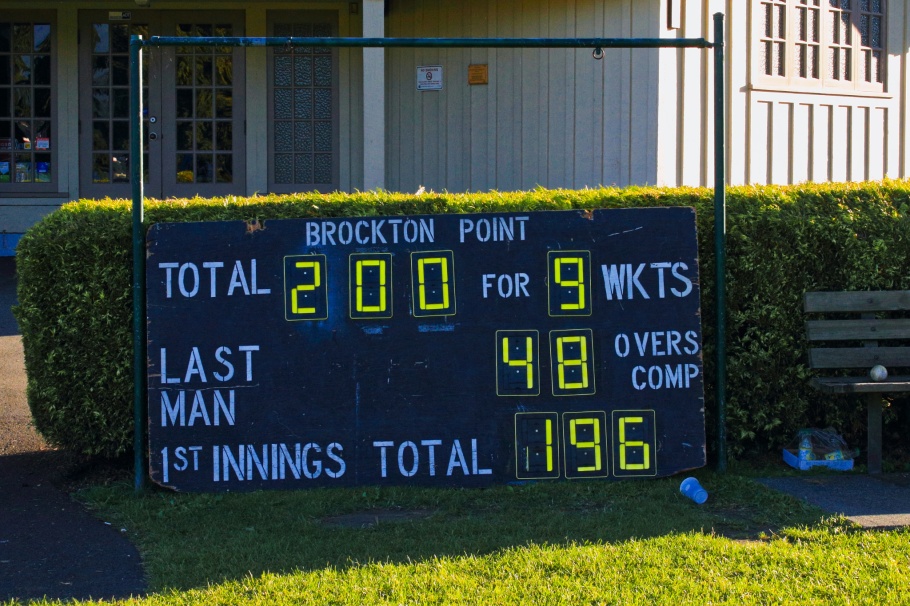 With a reply of 200 runs with a loss of 9 wickets in their innings, Salim Akbar I successfully chased Richmond I’s 196-run total, and won the match by 1 wicket (match stats).

•   Nasser Hussain, British cricket commentator and former cricketer, went back to his birth country of India and explored how deep cricket is in country and in Mumbai: part 1 | part 2 | part 3 (2020, on SkySport Cricket’s YouTube channel).

•   Rise of German cricket, thanks to migrants and refugees from South and Central Asia: BBC (2020).

Stanley Park is on unceded traditional territory and land of the Coast Salish First Nations Sḵwx̱wú7mesh (Squamish), Stó:lō and Səl̓ílwətaʔ/Selilwitulh (Tsleil-Waututh) and xʷməθkʷəy̓əm (Musqueam). Except for 3 images from the City of Vancouver Archives, I made all other photos above on 26 July 2014 with a Canon EOS6D mark1 and 70-300 glass. This post appears on Fotoeins Fotografie at fotoeins DOT com as http://wp.me/p1BIdT-5sS.

2 Responses to “My Vancouver: summer cricket at Stanley Park”