On my list and map, I placed the museum’s location as a “possible” to visit in the city. If I had time, I’d swing by and have a look, appealing to my fondness for science and the history of science.

Many arrive in Würzburg to visit the Residenz UNESCO world heritage site. On a daytrip from Frankfurt am Main, I duly visited the Residenz, and easily completed my initial visit requirements, as I knew I would. That’s when my inner voice (a.k.a., the spirit of B.Sc. ’90) reminded me insistently the museum was “simply and conveniently” on the return walk to the city’s central train station to fully complete my visit requirements.

I walked north from the Residenz, and followed the signs into the building for the Röntgen-Gedächtnisstätte (Röntgen Memorial) where X-rays were discovered. Standing inside the former laboratory space, I’m surrounded by artifacts, books, papers, tubes, equipment, and photographs.

I also feel a part of my undergraduate physics education has come full circle.

In 1895, Dr. Wilhelm Conrad Röntgen was physicist on staff with the Institute of Physics at the University of Würzburg. Röntgen carried out experiments to study cathode rays (negatively-charged electrons) using various kinds of cathode tubes which were readily available at the time. A cathode or negative terminal and an anode or positive terminal are fused within a glass tube that is evacuated or filled with a rarefied gas. With the two terminals connected in a high-voltage electrical circuit, the cathode is heated and electrons generated from the cathode race to the anode. The experimental apparatus was lightly shielded with black cardboard, but Röntgen noticed barium platinocyanide screens placed about 3 metres from the apparatus emitted a faint green glow. Further tests revealed the glow or fluorescence was caused by a previously unknown kind of radiation emanating from the apparatus, penetrating through the glass and cardboard, before striking the light-sensitive screens farther away. Röntgen deduced the new radiation was produced from inside the glass tubes: high-speed electrons striking the metal anode was producing highly energetic “rays”. For simplicity, he called the new radiation “X-rays” (“X-Strahlen”) to distinguish the finding simply from other known types of rays.

•   22 December 1895: he produced one of the world’s first X-ray image: the left hand of his wife, Anna Ludwig Röntgen. With shock upon seeing the image, she reportedly said: “I have seen my death“.

•   28 December 1895: Röntgen submitted to the Physical-Medical Society of Würzburg a manuscript titled, “On A New Type of Rays (Preliminary Communication)”, describing experiments and discovery.

•   31 December 1895: The manuscript was published within the 1895 annual report for the Physical-Medical Society of Würzburg.

•   23 January 1896: Upon invitation by the Society, Röntgen gave his only public lecture about his discovery. During the lecture, Röntgen produced an X-ray image of anatomist Albert von Kölliker’s left hand. Amazed by what he saw, Kölliker suggested the new rays be named “Röntgen rays” to which the lecture audience responded with enthusiastic applause.

•   February 1896: Eder and Valenta published a book with various X-ray images to show the world the utility of these “new rays” and to show what kinds of objects were opaque or transparent to the rays.

•   Röntgen chose not to patent his finding, allowing others to experiment and explore. By 1896, X-rays had already found uses in the medical community; e.g., diagnosis of broken bones, preliminary treatment of cancer, radiography of blood vessels (angiography).

•   12 November 1901: The Nobel Society awarded to Röntgen the first-ever Nobel Prize in Physics for the groundbreaking discovery. By this point, Röntgen and his family had already been at the University of Munich for a year.

It’s very easy to take for granted how important an role X-rays plays in contemporary society; medical imaging is an obvious and critical diagnostic tool in modern medicine. With the discovery at the end of the 19th-century, the “new” X-rays meant a whole new way of looking forward into the 20th-century, particularly looking “inside” objects without invasive rupture or unnecessary damage. What are “X-rays” in the English-speaking world are called “Röntgen rays” (Röntgenstrahlen, Röntgenstrahlung) in the German-speaking world. 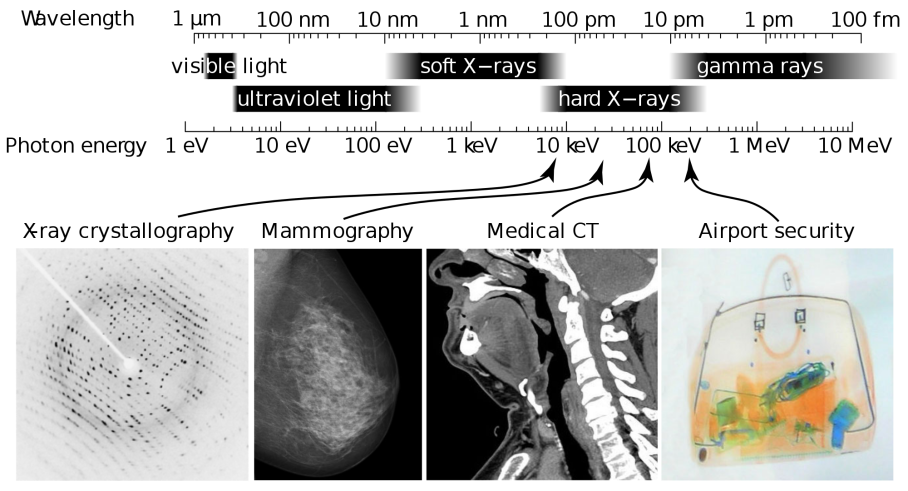 X-ray applications: image by Ulflund (Wiki CC3). Compared to visible light, X-rays are at much higher frequency and energy by a factor of 1000 to 100-thousand (corresponding to much smaller wavelengths by a factor of 1000 to 100-thousand). “Soft X-rays” and “hard X-rays” refer to the lower- and upper-energy ranges, respectively. Also worth remembering is that an X-ray diffraction image of crystallized DNA (“Photograph 51“) by Rosalind Franklin and Raymond Gosling in 1952 led to confirmation of the double-helix theory of DNA.

The 1878 building at Röntgenring 8 once housed Röntgen’s laboratory within the former Institute of Physics as part of the old University of Würzburg. The building survived for the most part bombing during World War 2, and underwent reconstruction in the late-1970s for present-day use by the University of Applied Sciences Würzburg-Schweinfurt. The non-profit registered association Röntgenkuratorium Würzburg e.V. coordinated and built a memorial where X-rays were discovered. The Röntgen-Gedächtnisstätte (Röntgen Memorial) opened in 1985, and the association updated the memorial in 2015. The European Physical Society (EPS) recognized the Röntgen memorial as an “EPS Historic Site” in 2016.

Entrance to the Röntgen memorial. Buildings at this site are now a part of the Technical University of Applied Sciences Würzburg-Schweinfurt, with offices and space for the Faculty of Plastics Engineering and Surveying and the Faculty of Architecture and Civil Engineering. 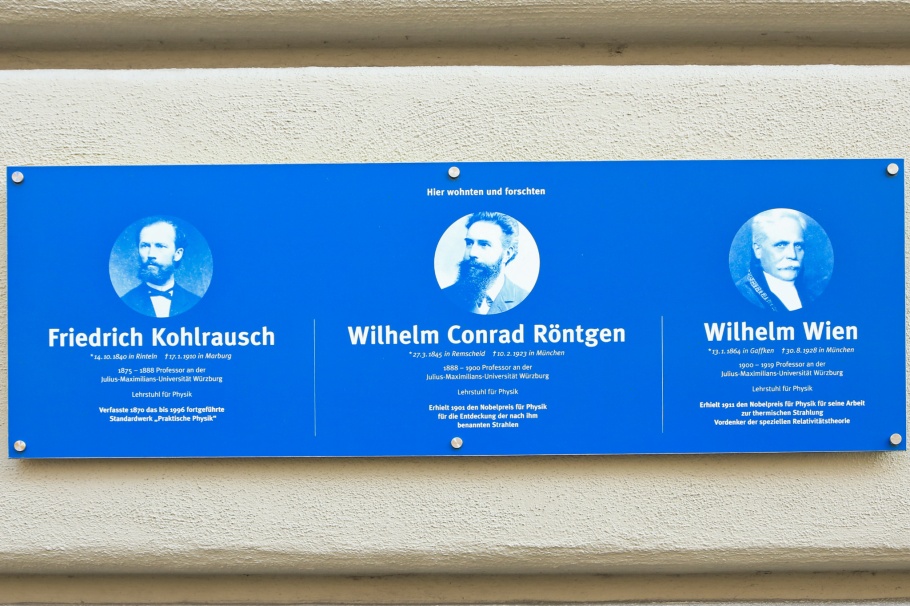 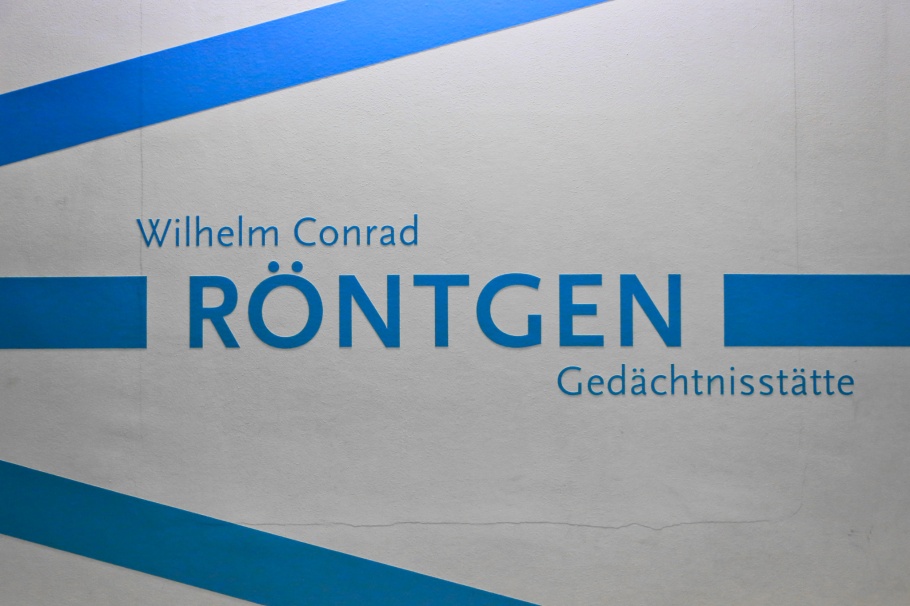 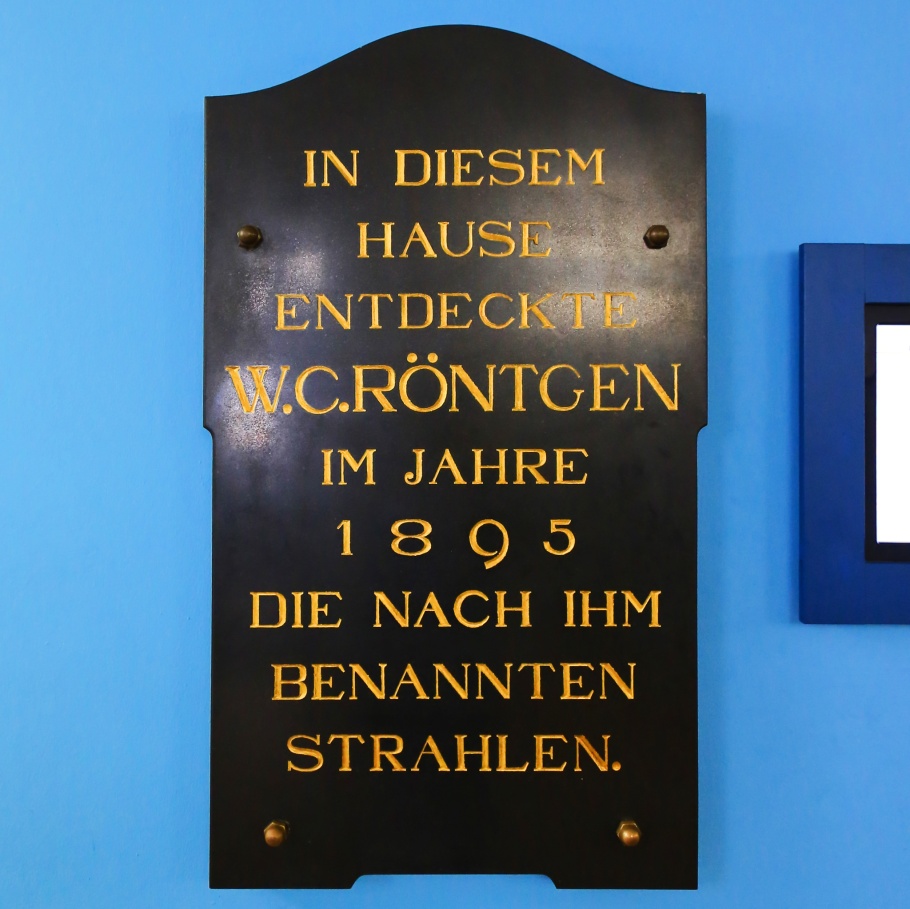 “In this building in 1895, Röntgen discovered in 1895 the rays which were named after him.” On the 10th anniversary of the discovery, this 1905 commemorative plaque was a surprise for Röntgen’s 60th birthday. Some 300 people donated to the construction of the plaque and subsequent installation at the physics institute. Also, 13 contemporary physicist colleagues including Ludwig Boltzmann, Hendrik Lorentz, Max Planck, and Wilhelm Wien signed an additional letter thanking Röntgen for his contributions.

X-ray tubes: Röntgen carried out experiments with known cathode tubes to study cathode rays. A cathode (negative terminal) and an anode or anticathode (positive terminal) are fused within an evacuated or airless glass tube. In a high-voltage circuit, negatively-charged electrons are accelerated from the cathode to the anode. High-energy photons (i.e., X-rays) are produced when high-speed electrons strike the anode and glass wall of the tube.

Left: X-ray image of Anna Ludwig Röntgen’s left hand, 22 December 1895. Right: X-ray image of anatomist Albert von Kölliker’s left hand, 23 January 1896. On the latter date, Röntgen gave his only public lecture on X-rays after an invitation by the Physical-Medical Society of Würzburg. Röntgen proceeded to make an X-ray image of Kölliker’s hand during the lecture. Astounded, Kölliker suggested the new X-rays should be called “Röntgen rays” which is how they’re referred today in the German-speaking world (i.e., Röntgenstrahlen, Röntgenstrahlung). 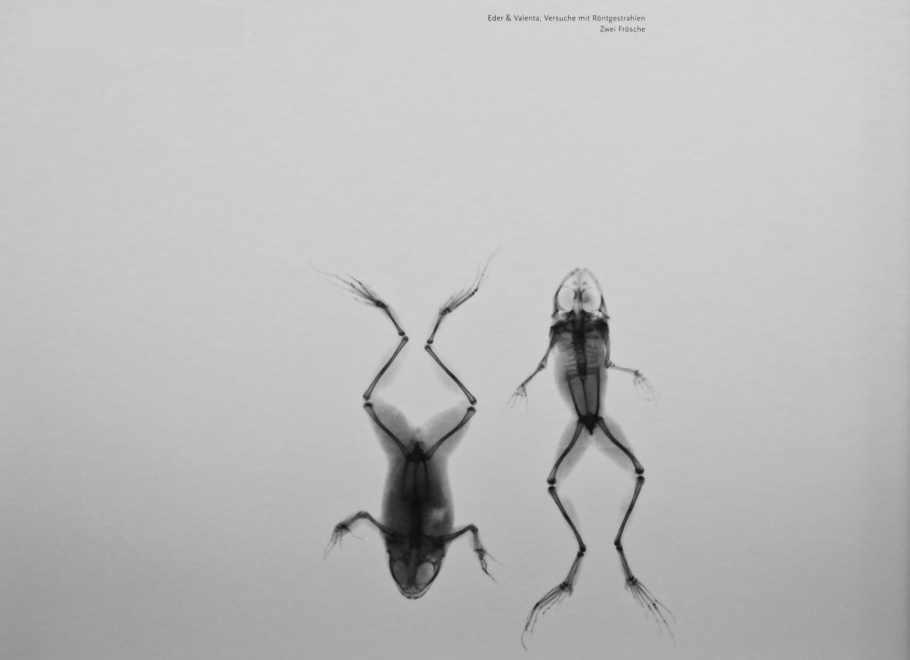 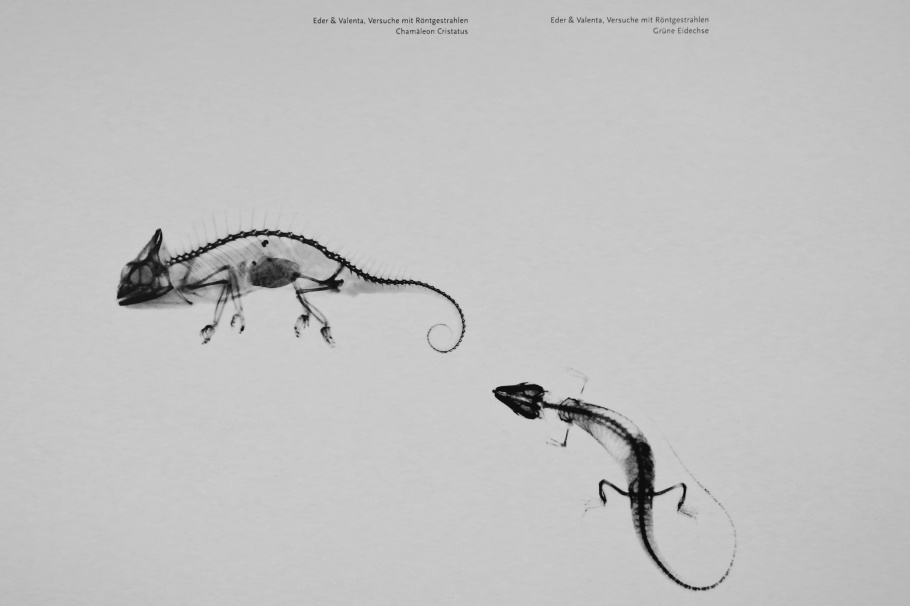 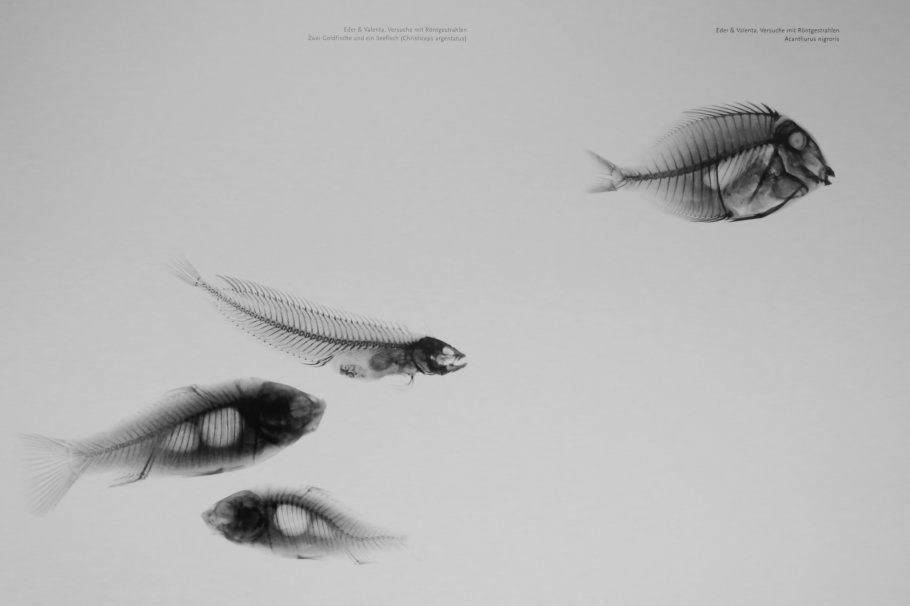 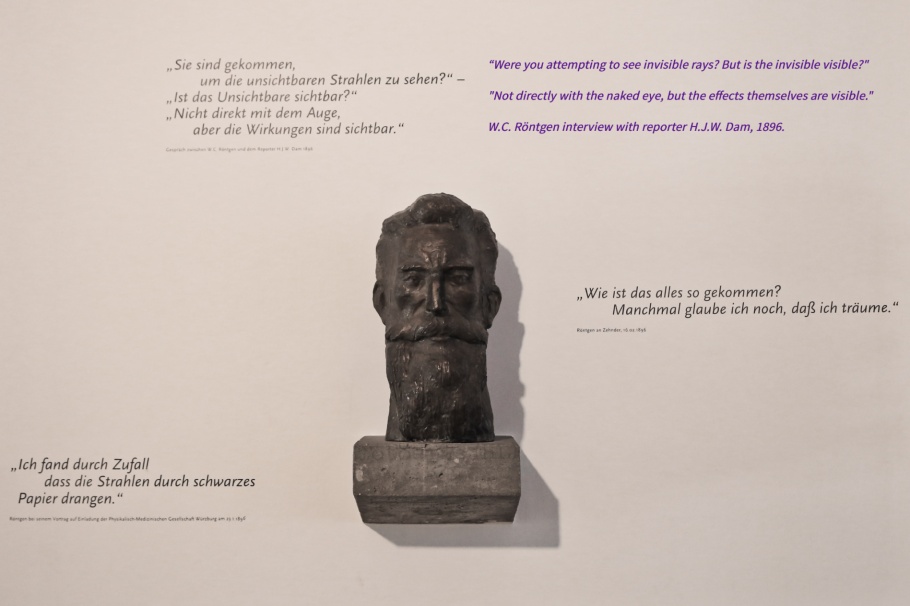 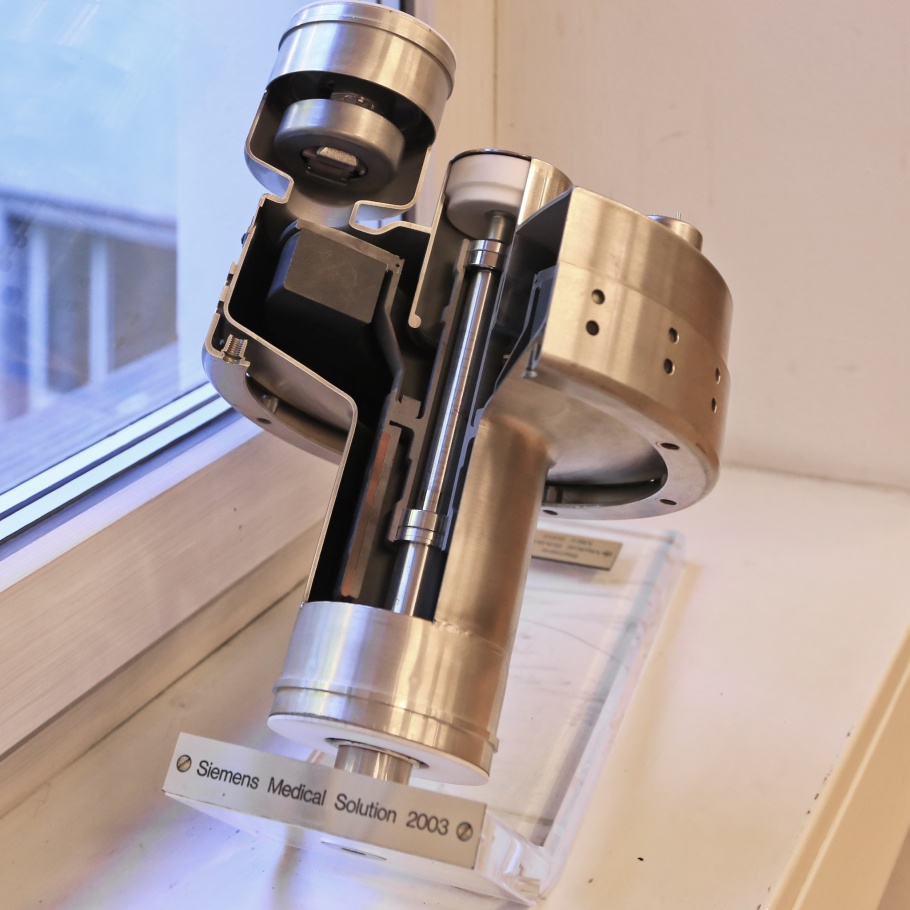 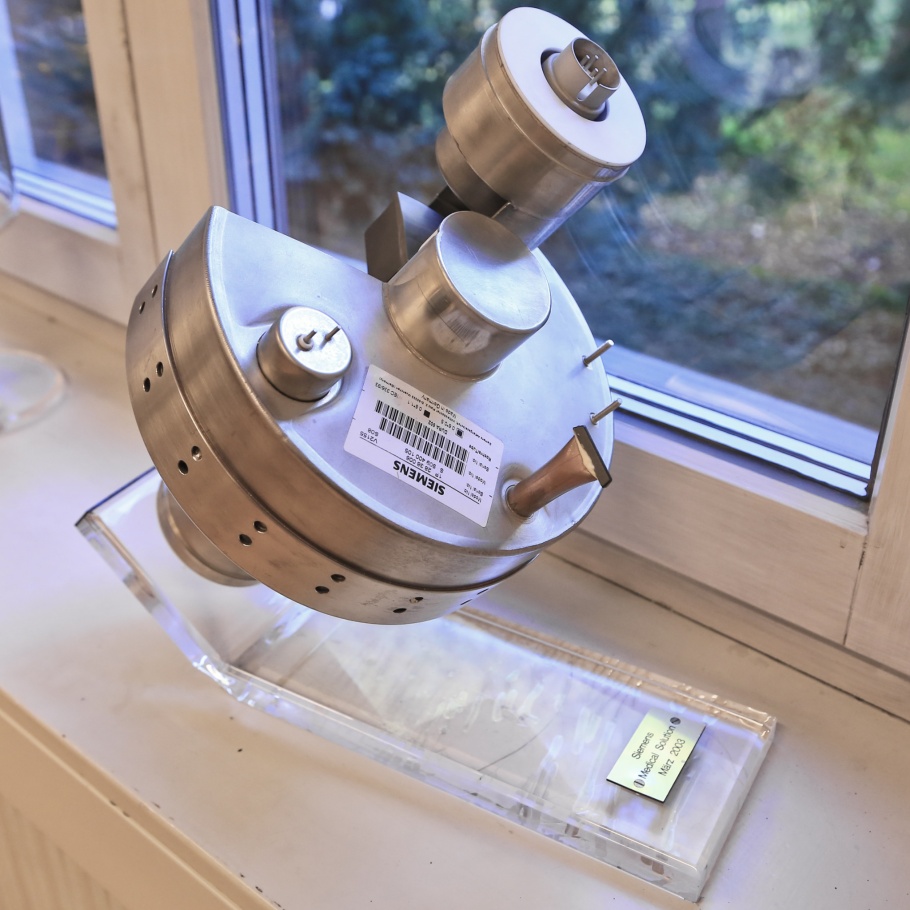 European Physical Society (EPS) Historic Site (7 June 2016) panel near entrance to the Röntgen memorial. “Institute of Physics, University of Würzburg (1879-1978), where X-rays were discovered. In this building which once housed the University of Würzburg’s Institute of Physics, Wilhelm Röntgen discovered X-rays on 8 November 1895. His discovery earned Röntgen the first-ever Nobel Prize in physics in 1901 and fundamentally changed the natural and applied sciences with direct applications to physics, astronomy, biology, chemistry, medicine (e.g., medical diagnostics), materials science (e.g., non-destructive characterization of materials), component analysis and safety engineering. Röntgen was the first of a series of Nobel Laureates – including Emil Fischer, Svante Arrhenius, Eduard Buchner, Karl Ferdinand Braun, Wilhelm Wien, Max von Laue, Johannes Stark, Walther Nernst, Klaus von Klitzing – who made research and teaching contributions in physics or chemistry at the University of Würzburg.”

8-minute video in English about the Röntgen Memorial, by Röntgenkuratorium Würzburg e.V (1990).

First part of Röntgen’s 1895 report: left, his handwriting in German; upper centre, transcript in block letters. Barker’s English translation: “1. If the discharge of a fairly large induction-coil be made to pass through a Hittorf vacuum-tube, or through a Lenard tube, a Crookes’ tube, or other similar apparatus, which has been sufficiently exhausted, the tube being covered with thin, black cardboard which fits it with tolerable closeness, and if the whole apparatus be placed in a completely darkened room, there is observed at each discharge a bright illumination of a paper screen covered with barium platinocyanide, placed in the vicinity of the induction-coil, the fluorescence thus produced being entirely independent of the fact whether the coated or the plain surface is turned towards the discharge-tube. This fluorescence is visible even when the paper screen is at a distance of two metres from the apparatus. It is easy to prove that the cause of the fluorescence proceeds from the discharge-apparatus, and not from any other point in the conducting circuit.”

Except for 1 Wiki image, I made all other photos above on 17 October 2017. This post appears on Fotoeins Fotografie at fotoeins DOT com as https://wp.me/p1BIdT-b0w.