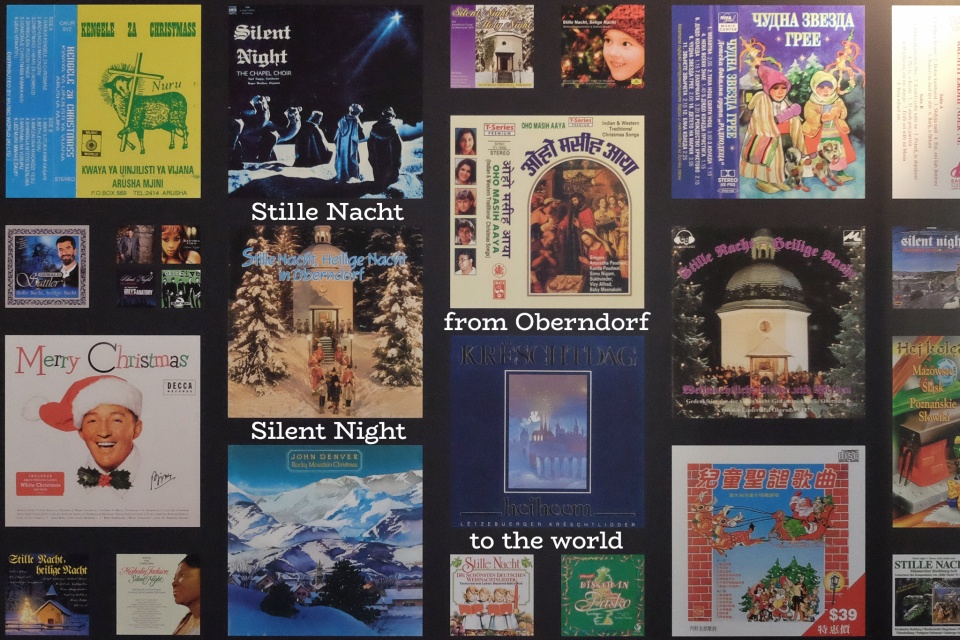 One of my early childhood memories surrounding Christmas is learning and singing “Silent Night”. This humble melodic carol is known around the world and sung in over 300 languages and dialects. 2018 is the 200th anniversary of the hymn’s first public performance, and that’s why I’m on a train traveling north from Salzburg to the Austrian town of Oberndorf.

With over 5000 residents, Oberndorf lies opposite the German town of Laufen along the winding flow of the Salzach river. Laufen-Oberndorf was once a single community whose people derived their greatest business and wealth with salt carried on barges from upstream in Hallein and transferred onto larger ships for transport downstream to the Inn river and Passau. After the arrival (and departure) of Napoleon’s French troops, the river became a border, and the town was split in two after over 1000 years as a single community#. Although Oberndorf and Laufen remain in separate countries, the European Schengen treaty has helped reforge their common bonds with the abolishment of border controls.

Between 1817 and 1819, Joseph Mohr lived and worked in Oberndorf as curate, minister, and schoolteacher for the salt-barger community. The organist for Oberndorf’s St. Nicolas Church was Franz Gruber, a fellow schoolteacher and sexton at a parish in nearby Arnsdorf. Mohr and Gruber tended to spiritual and education needs for their towns, and with their common zeal for music, they quickly became friends. On Christmas Eve 1818, Mohr brought his song to Gruber who added the melody. That very evening after evening mass at Oberndorf’s St. Nicholas Church, Mohr’s completed song, “Stille Nacht, Heilige Nacht” was performed for the first time with Gruber on his guitar as the only accompaniment.

Over years and decades, the song had generally been considered to be Tirolian in origin, but handwritten letters show Joseph Mohr composed the song by 1816 when he lived in Mariapfarr, a town 120 kilometres southeast from Salzburg. The original German-language version of the song has six verses; the English version has three which are translations of verses 1, 6, and 2.

At Oberndorf’s Stille-Nacht-Platz (Silent Night Square), the two key elements are the Stille-Nacht-Kapelle (Silent Night memorial chapel) and the Stille Nacht Museum. The original St. Nicholas church was in bad shape and torn down in 1906. To maintain the memory of the first performance of the Christmas song, construction began in 1928 for a chapel at the same location, and the townspeople celebrated the chapel’s inauguration in 1937. With the museum’s opening in November 2016, exhibits describe the history of how the song came to be, highlight the lives of Mohr and Gruber, explain the context of culture and place of the times in the late-18th to early-19th century, illuminate the importance of the salt trade on the neighbouring Salzach river, and celebrate the song’s longevity and popularity around the world.

Every year, evening mass on Christmas Eve from the Silent Night memorial chapel is broadcast to the world on webcam.

# The 1814-1815 Congress of Vienna enforced the Salzach river as the border and separation between the nation-state of Bavaria (Laufen) on one side and the Austrian Empire (Oberndorf) on the other side.

One of the world's most beloved #Christmas carols, "Silent Night" was written more than two centuries ago, yet keeps resonating at Christmas festivities. 13 of our colleagues sang the Christmas classic in as many languages. With this song we wish you a peaceful Christmas! 🎄🎶🎁 pic.twitter.com/Oil249J9Zd 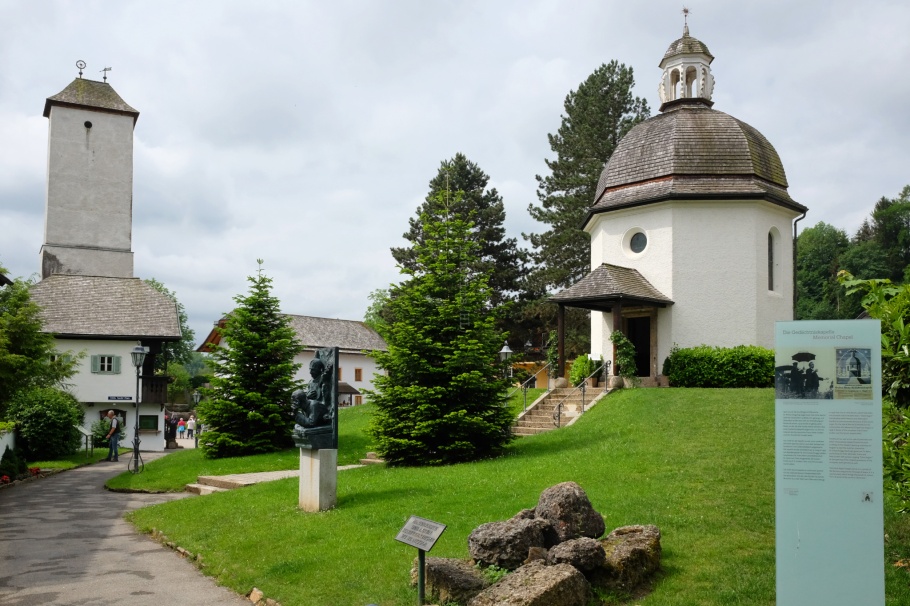 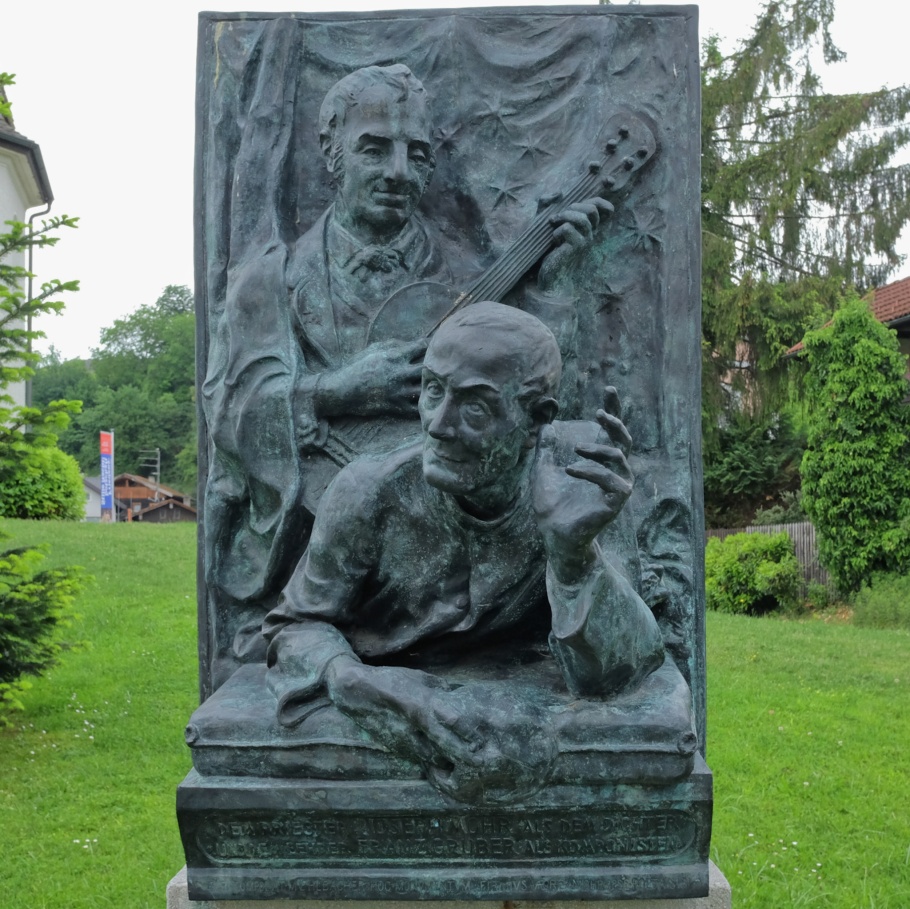 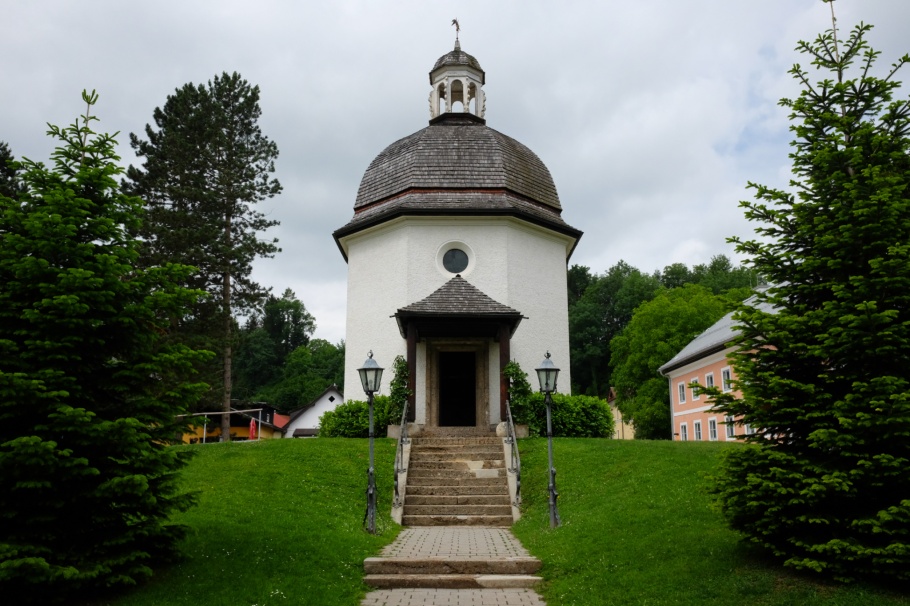 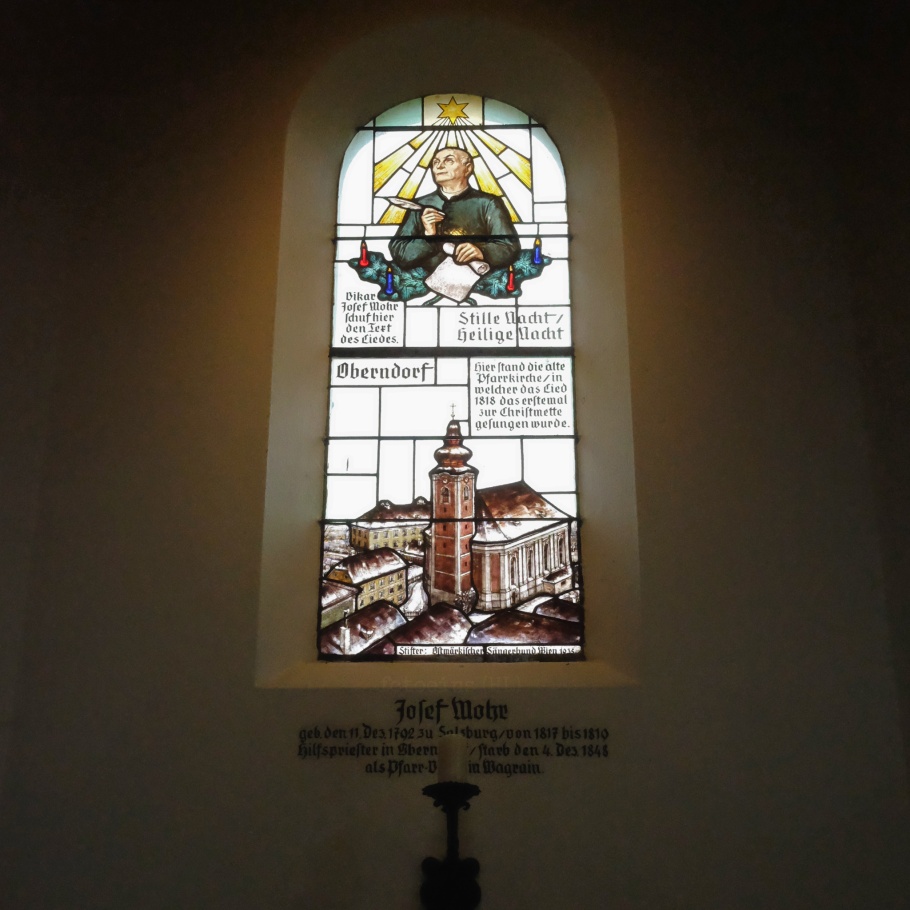 Stained glass window to Mohr, inside the chapel.

Stained glass window to Gruber, inside the chapel.

The song wanders through Europe. 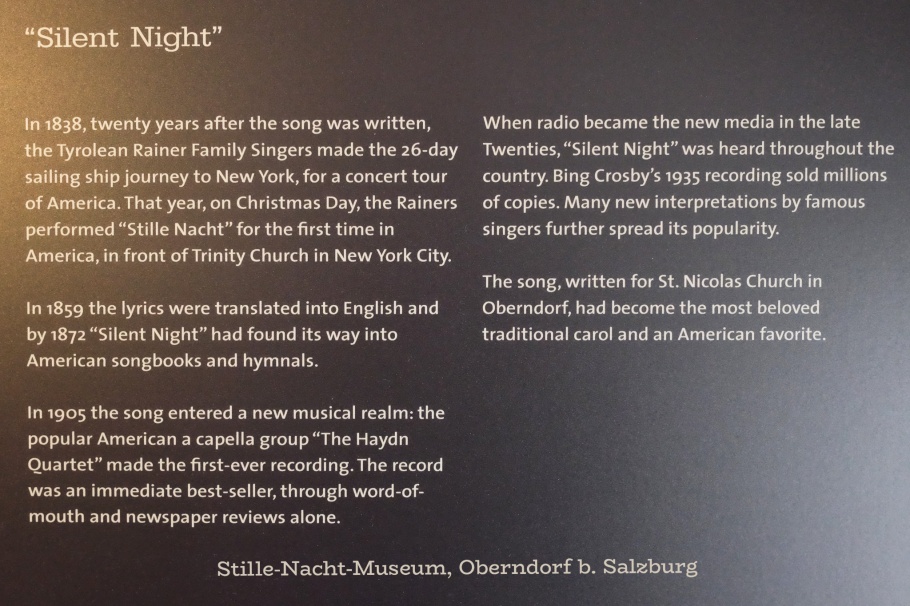 The song makes its way to America.

All around the world in multiple languages and dialects.

The memorial chapel is open daily including holidays from 8am to 8pm; there is no admission charge. The museum is open Thursday to Sunday and holidays from 10am to 6pm; in July, August, and December (Advent season), the museum is open daily from 10am to 6pm. Admission for adults is €4.50, but it’s free if you have one of Salzburg Card, Salzburg Seenland Card, or the Silent Night Country Card.

From Salzburg Hauptbahnhof, an S-Bahn S1 train to Oberndorf bei Salzburg runs every 30 minutes with the journey itself lasting 26 minutes. After disembarking at the train station called “Oberndorf b. Salzburg Bahnhof”, it’s a 10- to 15-minute walk to the northwest to Stille-Nacht-Platz. Alternatively, there’s intermittent service with local bus 880, 883, or 885 from Oberndorf Bahnhof to stop “Oberndorf b. Salzburg Altoberndorf”.

I made all photos above on 24 May 2018 with a Fujifilm X70 fixed-lens prime; alle Fotoaufnahmen sind mit Wasserzeichen versehen worden. This post appears on Fotoeins Fotografie at fotoeins.com as https://wp.me/p1BIdT-c8L.