In the German capital city of Berlin, the large billboards street-level at Potsdamer Platz advertise the kind of photography one can make with Apple’s iPhone 6. The vertical pattern of dunes and stripes leading down to the fragment of the Berlin Wall and people walking across the line of sight lent themselves to a shot which came together over time. The Berlin Wall once made this spot and the entire area no-man’s land.

•   What are the walls in our minds?
•   What boundaries have we set for ourselves?
•   What consequences occur when limits are surpassed? 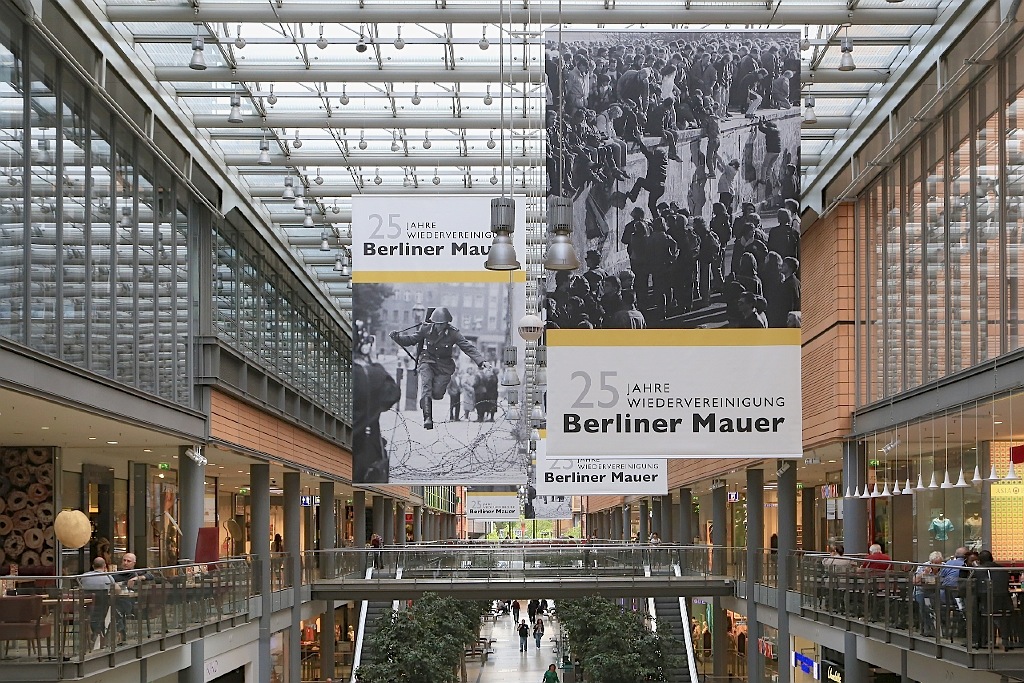 I made these photographs on 4 May 2015 with the Canon EOS6D camera and the EF 24-105 zoom-lens. This post appears on Fotoeins Fotopress at fotoeins.com at http://wp.me/p1BIdT-72u.

After decades of division and the construction of the Wall, West and East Germany were reunited as the single nation of Germany in 1990. October 3 was chosen as Tag der deutschen Einheit, or German Unity Day. 2015 marks the 25th anniversary of the (re)united Germany.

It’s an important day in the country where flag-waving is possible, where people can show their pride of a modern and (re)united country. As the 2006 FIFA World Cup showed, the colours of the black, red, and gold were on display everywhere. Germans and visitors alike revelled in the joys, hopes, and aspirations of the present-day nation. Shown here are German flags flying next to Berlin’s Reichstagsgebäude (Reichstag building).

I’m absolutely delighted to call many in Germany as friends, and frequent visits to the country continue to provide lessons, one of which is that I generally feel at home. I remain open to learning, and I never leave disappointed. I always find something new about what it is to love about the country and her people.

I made the photos above at the southeast corner of Platz der Republik (Republic Square) on 19 March 2011. This post is originally published on Fotoeins Fotopress at fotoeins.com as http://wp.me/p1BIdT-Gv.