I’m highlighting the La Serena-Coquimbo area in north-central Chile, where I lived from 2006 to 2011 after many visits to the area between mid-1990s and the early aughts.

On previous visits to La Serena, I’d always been curious but never thought to ask. As new resident of the area in 2006, I finally make my way to the imposing cement structure. I’m up at the elevated platform where additional viewing areas provide a complete panorama of the area. At the foot of the cross there’s a chapel and a museum of religious art.

Inaugurated in 2001 on top of the hill Cerro El Vigía in the town of Coquimbo, the cross stands 93 meters high and 40 meters wide as one of the largest religious monuments to Catholicism in South America, and marks the calendar’s transition into a new millennium. That’s why the Coquimbo Cross is formally called la Cruz del Tercer Milenio (the Cross of the Third Millennium). In clear transparent conditions, the cross is visible to the naked eye from mountain observatories 60 kilometres to the east.

Standard view of Coquimbo from the beach in late-afternoon light – 15 Sep 2006.

I highlight the La Serena-Coquimbo area in north-central Chile, where I lived from 2006 to 2011 after many visits to the area between mid-1990s and the early aughts.

The shallow J-shaped bay and the 10-km long narrow strip of sand facing the Pacific Ocean is very popular in summer with visitors streaming into town from Argentina, Brazil, and other parts of Chile, ballooning both people- and vehicle-numbers. Always worth spending is time on the beach on a calm sunny morning or on a windy cloudy afternoon. The image here is late-afternoon on a beautiful warm late-summer day in February with the sun setting over the Coquimbo peninsula across the bay.

I made the photo above on 22 February 2006 with a Canon PowerShot A510. This post appears on Fotoeins Fotografie at fotoeins DOT com as https://wp.me/p1BIdT-jtG.

One time five years ago, I moved from the western hemisphere (Canada) to the eastern hemisphere (Germany), at least where measures of longitude are concerned. And now, I’ve gone from summer in the northern hemisphere to the final week of winter in the southern hemisphere; Minneapolis to La Serena only seems far in the mind. The Pacific is an ocean with which I’m familiar, but what’s unfamiliar is the time difference. I’m hugging the Americas’ continental western coastline, and yet I’m in the same time zone as the American Atlantic coast. The difference in time zones will take some adjustment.

I’ll have the next five years to adjust.

The scene above is on the beach next to Avenida del Mar, southwest across the bay to Coquimbo and the Cross of the Third Millennium.

Then again, this piece from Banksy is an alternative response.

I made the photo above on 15 September 2006 with a Canon PowerShot A510 camera. Ten years later (plus two weeks to the day I made the photo), this post appears on Fotoeins Fotopress at fotoeins.com as http://wp.me/p1BIdT-7Mt. 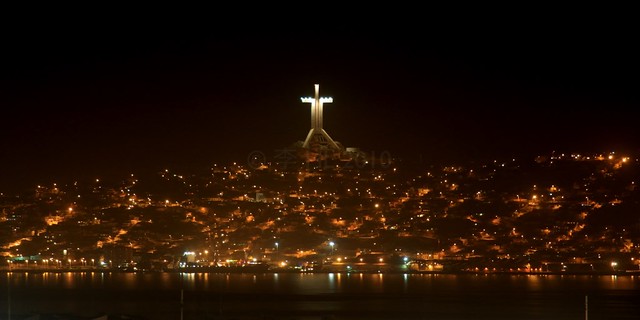 I made the photos above on 29 Oct 2010 and 7 May 2011 with a Canon EOS450D/Rebel XSi. This post appears on Fotoeins Fotografie at fotoeins DOT com.