Located about 30 kilometres southwest from Berlin, Potsdam is the capital city of the German federal state of Brandenburg. The proximity with Berlin means it’s an easy afternoon- or day-trip to visit Sans Souci Park and a relaxed wander through the city’s Old Town. But there’s also an easy half-mile (800 metres) walk through the heart of the Old Town to see and sample the city’s Christmas market during the holiday season by day or at night. Accompanied by sparkling (blue) lights, the sights and smells of mulled wine, hot chocolate, grilled sausages, roasted nuts, and sweets from various market stands are sure to tempt even the most stubborn of passers-by.

This Brandenburg Gate (1770) is smaller but older than Berlin’s version.

Click on the arrow-window icon at the upper-left corner of the map below to view the legend.

I made the photos above on 8 December 2015. This post appears on Fotoeins Fotopress at fotoeins.com as http://wp.me/p1BIdT-9d6. 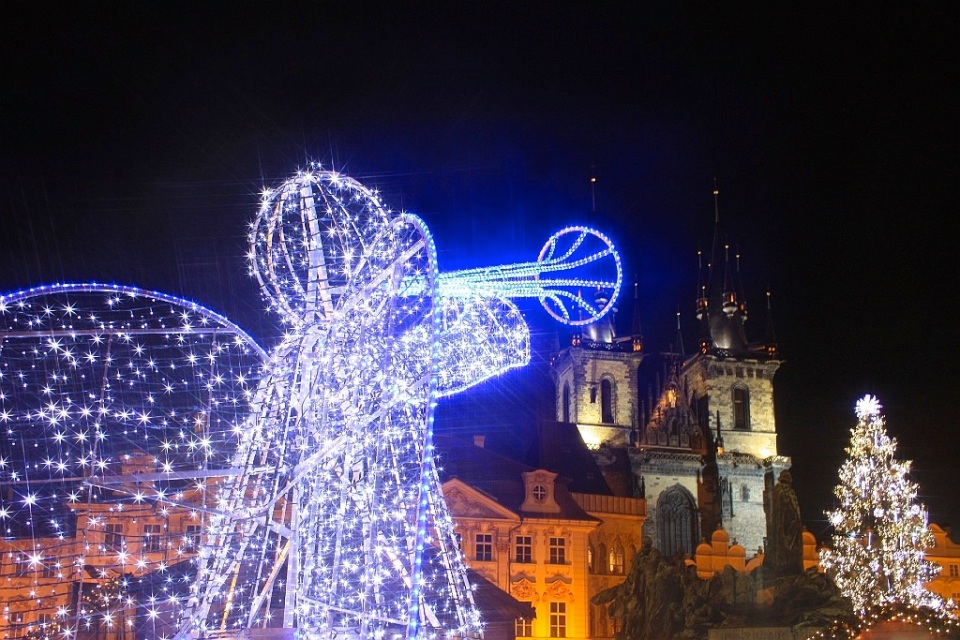 One thing about which I’m particularly attracted at Christmas Markets are the lights. Having frequented the Czech capital city of Prague, the surprise is entirely mine when sparkly angels of light appear in time for the city’s Christmas markets. This angel in the northwest corner of Old Town Square points to the towering spires of the Church of Our Lady before Týn. At the foot of the church are the Jan Hus memorial statue and the ever-present and illuminated Christmas tree.

‘Twas the night before Christmas, when all through the Hauptstadt,
no residents were stirring, not even a tourist …

It’s little surprise many find themselves where they’re supposed to be on Christmas Eve.

Ever since visiting Berlin the first time in 2002, I’ve always entertained the idea of photographing the German capital city during winter holidays. The city slows down, becomes quiet, and sits back as if to take a deep long breath.

Crammed train stations seem cold, emptied of all who normally stream through the halls. The usual sounds of the city are muted by diminished traffic on the day before Christmas and by the sound-diffusing and -absorbing property of falling snow. City fixtures and Christmas decorations cast bright spotlights down on the ground layer of snow while diffuse glow of colour is scattered up to the cloud deck overhead.

Under blizzard-like conditions and little street traffic, I cannot deny myself this beautiful photographic opportunity.

END_OF_DOCUMENT_TOKEN_TO_BE_REPLACED

Why are there shoulder-to-shoulder crowds braving heavy snowfall while packed in tiny slushy streets in Germany’s financial centre? It’s got to be the Frankfurter Weihnachtsmarkt or Frankfurt’s Christmas Market.

Frankfurt am Main (pronounced “mine”) has a reputation of staid people concerned only with making money in “Main-hattan” and the apparent transgression of simply being “physically unattractive” compared to other cities in the nation. But the city’s people makes up for these perceived failings with a large Christmas market almost one kilometre in length. Frankfurters work hard and party hard, turning modern can-do energy into high holiday tradition.

Frankfurt’s Christmas Market begins at the pedestrian-only shopping area that is the Zeil just outside Hauptwache train station, continues south on Liebfrauenstrasse and Neue Kräme to Paulsplatz, meanders on and expands out to the “market’s centre” at Römerberg square in the heart of the Altstadt (Old Town), and south again onto Fahrtor towards Mainkai on the northern shore of the river Main.

With an obligatory Glühwein in hand, the compactness of a long continuous market packing a maximum number of people is a big reason why I enjoy this Christmas market. It’s an occasion I don’t mind crowds, although sometimes I wonder at the looks and smiles on people’s faces: this is Frankfurt?!

Another highlight is the 30-metre (over 100-feet) high Christmas tree at Römerberg. A third highlight is that with the earliest recorded mention of Frankfurt’s Christmas Markets in 1393, people in the subsequent six centuries know a lot about local Christmas customs; for example, their version of the humble Reibkuchen (potato pancakes) rivals those at other markets around the country.

With over three decades spent in Köln, one of my best friends in Germany loves the Christmas markets in his hometown Karneval City, but there are three reasons why the Frankfurt market is special to him. “It’s at this market where I met a woman for our first date, and she’s the one whom I eventually married,” says Ömer. “They’ve got the best Reibkuchen around. Finally, there’s a ‘Honey Hut’ where the local Imkerei (beekeeping, apiculture) sets up shop with various kinds of honey, honey liquor, and Christmas figures and candles made from bees’ wax.”

I could sip on that smooth honey liquor all day; Reibkuchen with apple sauce are light not oily; and I can understand how even a staunch Kölner can enjoy Frankfurt’s market.

With three photos made by Ömer Kutbay (ÖK), I made these photos on 18 December 2010. This post appears on Fotoeins Fotopress at fotoeins.com.

This was a part of a set of photos I took up on the steps from the Brandenburger Tor S-Bahn/U-Bahn station at Pariser Platz. In all of the shenanigans, I realized I had just made photograph number 15000 with my camera.

Initially posted on Posterous, the post appears on Fotoeins Fotopress on fotoeins.com as http://wp.me/p1BIdT-15.