In the east German town of Wittenberg, the Schlosskirche (Castle- or All Saints’-Church) is one of four sites as part of the town’s status as UNESCO World Heritage Site since 1996.

Elector Frederick III of Ernestine Saxony (1463-1525, also known as Frederick the Wise, Friederich der Weise) became the first patron of the Protestant Reformation with his support and defence of Martin Luther. On the site of the original city castle, Frederick the Wise authorized in 1489-1490 a renaissance palace with the entire north wing occupied by the Castle Church. The church was consecrated and inaugurated in 1503 as the castle and university church “Allerheiligen” (All Saints); Martin Luther taught theology as professor at the neighbouring university. The first Protestant service at the Castle Church was held in 1524-1525.

A significant portion of the church including the original wooden doors was burned and destroyed in 1760 during Europe’s Seven Years’ War (1754-1763). The 1770 replacement church was subsequently destroyed in the conflict against France’s Napoleon which ended with the town under Prussian control in 1815. With support and backing by Emperor Wilhelm II, a full renovation of the church took place between 1885 and 1892 with the west tower taking the form and shape we see today (see also below). The graves for Martin Luther, contemporary colleague and fellow reformer Philipp Melanchthon, and Frederick the Wise are inside the church. After three years of renovation and restoration work in time for the Reformation quincentenary in 2017, the Castle Church was reopened in the autumn of 2016. 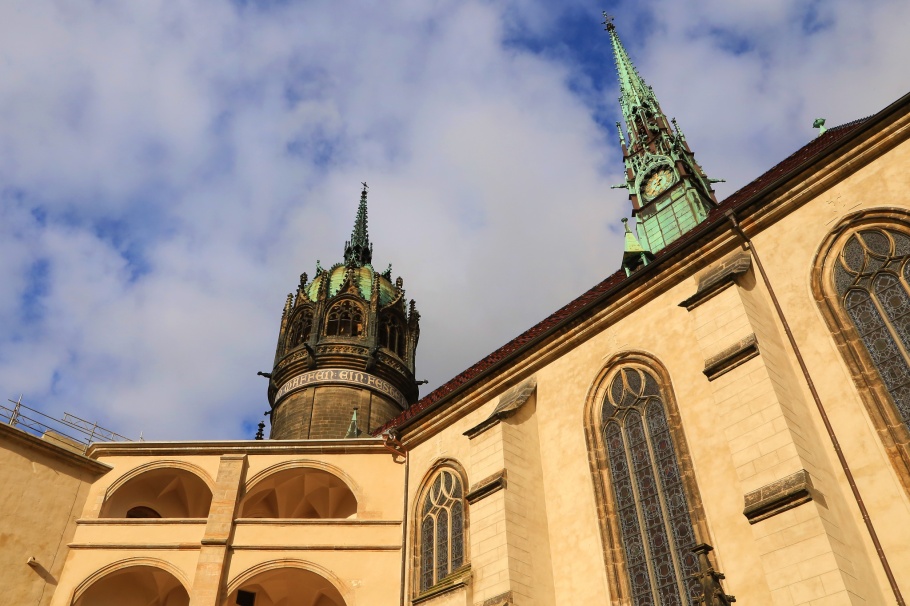 END_OF_DOCUMENT_TOKEN_TO_BE_REPLACED

In the east German town of Wittenberg, people bask under the late-autumn afternoon sun in the Luthergarten (Luther Garden), under sight of the massive 88-metre (290-feet) high Neogothic spire of the Schlosskirche (Castle- or All Saints’-Church). “Ein feste Burg ist unser Gott, ein gute Wehr und Waffen” is the first verse from one of Martin Luther’s best-known hymns written between 1527 and 1529. The verse encircles the tower as a one-metre tall frieze made with over 100-thousand individual pieces of Meissen porcelain. The Schlosskirche is one of four sites which assign Wittenberg’s status as UNESCO World Heritage Site.

IMG- and Sachsen-Anhalt-Tourismus, the city of Lutherstadt Wittenberg, and the Luther Hotel for their patronage and access to facilities. I made the photo above on 30 October 2016 with the Canon 6D, 24-105 zoom-lens, and the following settings: 1/640s, f/16, ISO2000, and 47mm focal-length. This post appears on Fotoeins Fotopress at fotoeins.com as http://wp.me/p1BIdT-97I.

IMG- and Sachsen-Anhalt-Tourismus supported my visit to the German federal state of Saxony-Anhalt from 25 October to 3 November 2016 inclusive. I also received assistance from the cities of Eisleben, Mansfeld, Dessau, Wittenberg, and Halle (Saale).
51.866260 12.638210