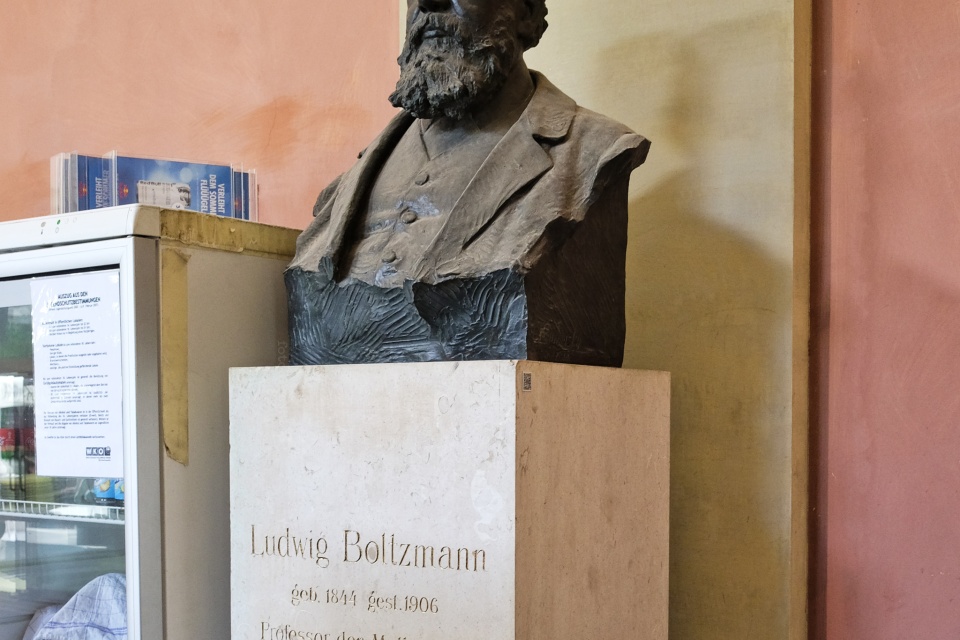 I’ve highlighted notable physicists who’ve been memorialized within the Arcade Courtyard in the main building of the University of Vienna:

These are all names whose work and discovery form the historical and scientific basis of my university education in the field of physics.

The inscription for physicist and university professor Ludwig Boltzmann reads:

In collaboration with Josef Stefan, the Stefan-Boltzmann Law describes how an object that absorbs all radiation falling on its surface emits radiative intensity (I, radiation energy per unit time per unit area) that’s proportional to the fourth power in temperature T with constant emissivity ε (between 0 and 1) and Stefan-Boltzmann constant σ.

Ludwig Boltzmann was also one of Lise Meitner’s professors and advisors at the university. Meitner would become the 3rd woman to receive a doctorate in physics from the University of Vienna, and would go on to describe the process of nuclear fission.

The university’s historical main building is inside the city’s Old Town which has been inscribed as UNESCO World Heritage Site since 2001. I made the photo above on 16 May 2018 with a Fujifilm X70 fixed-lens prime and the following settings: 1/30-sec, f/5.6, ISO1000, and 18.5mm focal length (28mm full-frame equivalent). This post appears on Fotoeins Fotografie at fotoeins DOT com as https://wp.me/p1BIdT-iGz.