The mind’s eye slowly emerges, hanging over my shoulder for hours after the official declaration at 850pm.

With the nurses’ gentle request, I comply without a word, and I sign the paperwork.

I walk back into the hospital room where she lies. The only sounds are from her neighbour, another patient in another bed, their laboured breathing as sign of life.

I gaze out the window to the nighttime lights of the city. From a great height, I cannot see individuals, but I see them in motion on the streets, and alive in the lights of their houses.

At her bedside, I hold her hand, cool to the touch. I place my other hand on her forehead: there’s a little warmth as I smooth her skin with my thumb. Her eyes are closed, but there’s no breath or acknowledgement. When I close my eyes, the dream doesn’t go away, and ashes begin to fall. I lean down next to her ear, and whisper quiet words at the close.

I palm her cheek one final time, as I’ve done over the last days and weeks.

At the doorway, I turn around and look at her still body one last time. I will not see my mother again until the funeral.

I thank the nurses, and make my way out of the Palliative Care Unit. To the elevators. To the lobby. Out into the cold night. Inside the car, my hands are locked frozen onto the wheel, and I begin to shake with tremors. I let the jolt and shock pass through, and with the recall of past experience, I glide over giant waves of grief.

For the first time, I enter the family house without either parent. It’s surreal and unsettling.

From 1976, this house has been a busy noisy compact home for us; I remember us as kids racing to the top of the stairs to claim our very own bedroom.

Alone now, the walls echo with sounds from the floors, wood frame, and the pipes. I ascend the stairs in the dark, navigating the upper curve from memory. I shuffle to the parents’ bedroom. With a flick of the switch, the unmade bed is in the same final state, when the paramedics moved her into the waiting ambulance earlier that day.

In less than 12 hours from house to hospital, she slipped away, peacefully and quietly into the aether.

With my parents’ passing, I fulfilled my promise to them. There’d been new beginnings, layered with new understanding and sprinkles of forgiveness along the way. I was granted an extra-time bonus in years: a son to his parents, and a parent for his Mom and Dad.

And it is here, I died twice, in the city of Vancouver.

They often spoke about a long-term care home, but Mom and Dad thrived most comfortably at home. That was obvious. With no other family available, the parents’ age, health, and declining proficiency in English pointed inevitably to a choice I had to face.

Continue a life in another country or continent, effectively abandoning them.

I have few regrets since returning to Vancouver in mid-2013, despite the loss.

In early-2014, I discovered Dad had been diagnosed with colon cancer. In fact, that discovery had come the year before, but he had told no one. With me around, he could no longer avoid follow-up appointments. Dad, Mom, and I carefully discussed options, including surgery. We all agreed he’d live out the rest of his time as best we could arrange. By August 2014, I had watched my father die from colon cancer; he was 82.

In late-2019 to early-2020, Mom and I were busy with appointments for various scans of her upper body. We learned she had nodules in her liver. Once again, Mom and I calmly went over our options, including surgery. We both agreed she’d live out her time as best we could. Within weeks in March, the pandemic was declared worldwide. Miraculously, neither she nor I contracted or brought the virus into the house, but liver cancer offers no mercy or respite. Her slow decline through the first half of the year made a downturn in autumn, and her condition took a sharp dive between Christmas and New Year’s. In early February 2021, I watched my mother die; she missed her 90th birthday by a mere 6 weeks.

Caring for them with the idea or thought their condition would never improve to life before cancer and that deterioration was an absolute certainty is inhabiting a type of purgatory, and a heavy burden I had to learn how to carry. What weighs me down is I’ll never hear their voices or words to me, and I’ll never speak to them in my first language (Toisan/Hoisan). I’ll never take my parents out for a drive out to the park or beach, or to a restaurant where they can have their favourite food. Memory and ache melt into something amorphous, a fresh sort of hell.

How does anything or anyone try to describe or summarize a life lived over 8 to 9 decades? I tried with a glimpse at our family of four. Below is a brief look at Mom through a number of images: young woman in Hong Kong, immigrant navigating a new life in Canada, married and moved to Vancouver, where she spent the rest of her life. 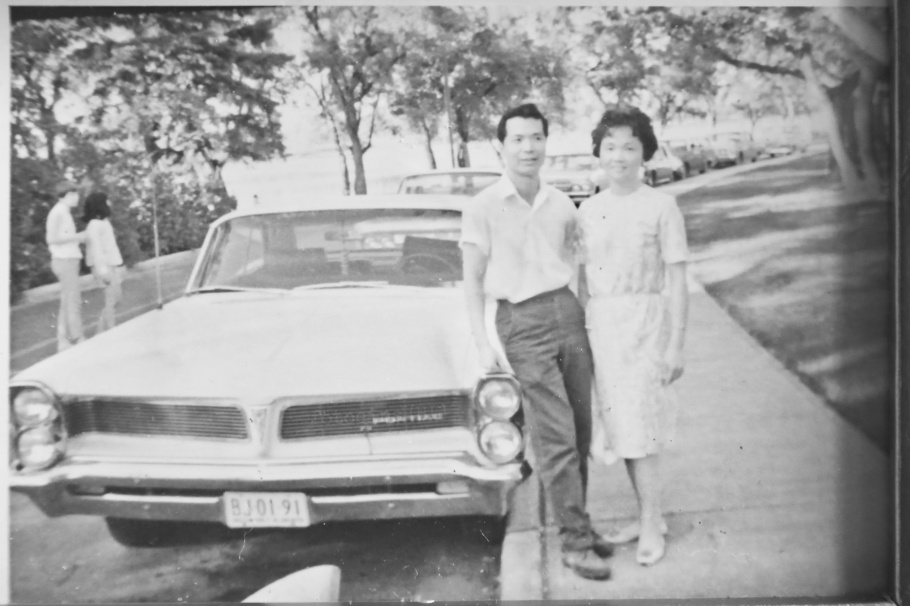 Visiting family in Calgary, summer 1975: in the back row are Mom; her mother; and her older sister Jean.

Mom liked to travel after her children left home, and fortunately, she’d made a return visit to Hong Kong and southern China. Finding this print, I was thrilled by its familiarity. This is Hauptwache, a square in downotwn Frankfurt am Main, Germany; Frankfurt is a city to and from which I’ve flown countless times after living in Heidelberg. In 2007, she visited Europe on a guided tour with a group of friends from Vancouver’s Chinatown.

I was delighted to learn she’d also visited Sydney, Australia in 2007. This image is at Mrs. Macquaries Point, facing west to the city’s two big landmarks: the Opera House and the Harbour Bridge. 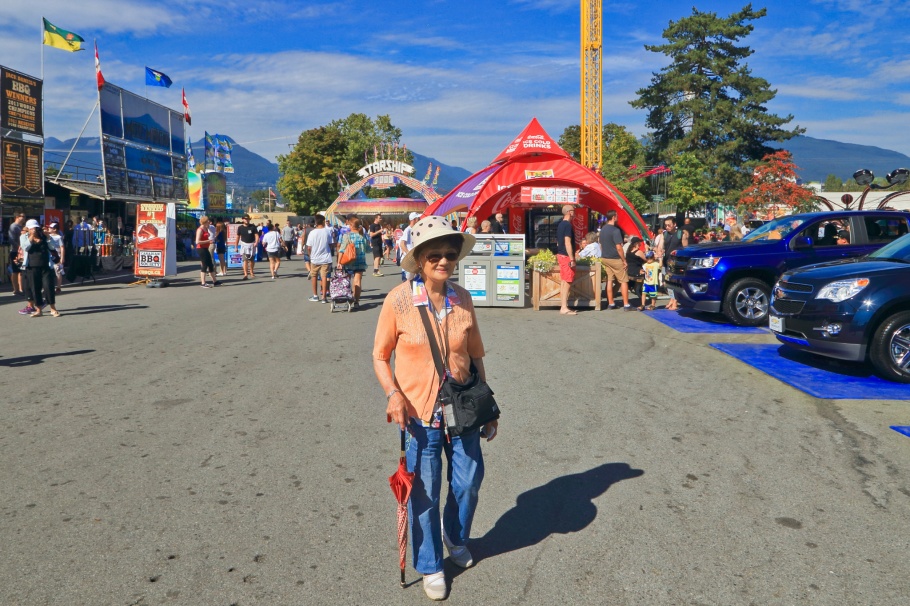 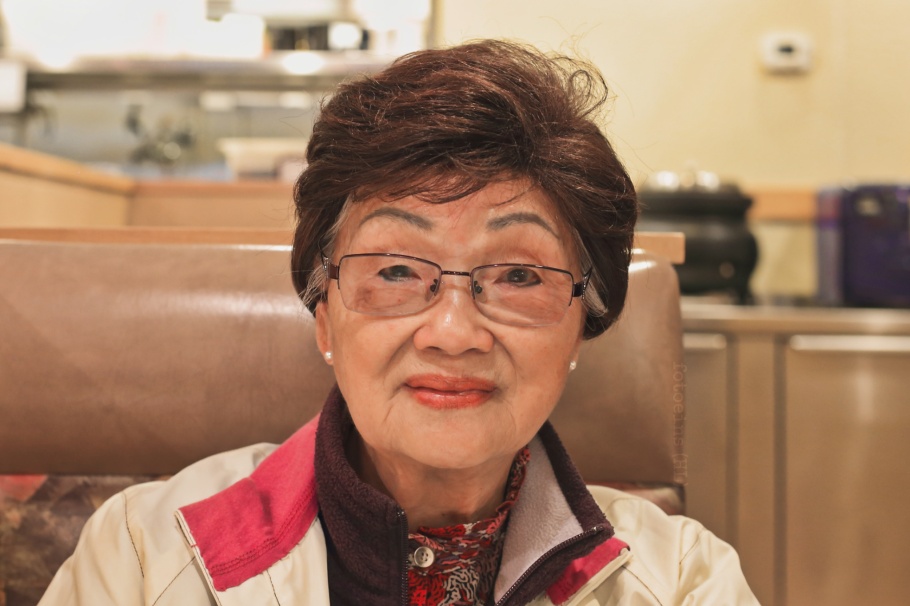 “The day after.” She insisted she did not want to go to the hospital. Her gasps for air and moans in pain said otherwise. I called for an ambulance. I don’t know how aware she was of her surroundings. But I knew, just like the last time with Dad, she would never come back to the house. 4 Feb 2021 (6D1).

“Together again, for the rest of time.” The orientation corresponds to the Chinese word for “good” (好) with the feminine word radical (女) at left and the masculine word radical (子) at right. Facing south towards the Fraser River, Ocean View Cemetery – 23 Feb 2021 (X70).

… Well, I can’t see you smile
this is just seconds in your whole life
you know it’s been awhile
but I’m here
I’m right here …

For the most part, I made images of film photographs from our family’s archive. All other images are from my sister’s mobile (SC), by Lisa Binkley (LB), or made from one of my devices (iPT6, 6D1, X70) from 2014 to 2021 inclusive. This post appears on Fotoeins Fotografie at fotoeins DOT com as https://wp.me/p1BIdT-klM.

9 Responses to “The place where I died again”