I can’t spend all this time in the Czech capital city, and leave without paying any respects to two 20th-century personalities of Prague. Franz Kafka was an early 20th-century German-Czech writer (e.g., 1912 Die Verwandlung/Metamorphosis), whose writings became known to the world posthumously, thanks to friend and fellow writer Max Brod. In the 1960s, Jan Palach was an important historical figure of opposition who died in protest against the Communist regime.

I’m in the underground metro, heading east from the city centre towards Vinohrady and beyond to Olšany. The sun’s out on a crisp mid-autumn day, and while deciduous trees are left wanting for leaves, the latter have piled like carpets of colour on the cemetery grounds. I’m looking for the graves of Palach and Kafka who are buried in Olšanské hřbitovy (Olšany Cemetery) and Nový židovský hřbitov (New Jewish Cemetery), respectively.

Prague’s largest cemetery is on the site of the former village Wolšany with land set aside in the late 16th-century and burials taking place during outbreaks of the bubonic plague during the 18th-century. The cemetery became the city’s official cemetery in 1787 by decree of Habsburg Emperor Joseph II. All subsequent burials had to take place here; many existing graves within city walls of the time were moved to this new cemetery outside of the city walls. Within Prague’s Žižkov district, Olšany Cemetery spans an area of over 50 hectares (124 acres) with its assembly of 10 burial grounds: Cemetery 1 (oldest) to Cemetery 10. To date, the cemetery includes 25-thousand tombs, 200 chapel tombs, 65-thousand graves, 20-thousand urn graves; the number of buried is an estimated 2 million.

Metro station Flora (stanice metra Flora) is outside the southwest corner of the cemetery. 400 metres east on Vinohradská street is the cemetery’s main entrance, flanked by administrative offices (Správa) and washrooms (WC). Turn right inside the main entrance, and you’ll find Jan Palach’s grave (IX/2/89). Some 250 metres to the left of the main entrance is a common grave for ex-Communist figures (V/23/137).

In 1968, Czechoslovakia had endured 20 years of one-party rule after the Communists had seized power in a coup d’état. In a period known as the Prague Spring, Czechoslovak President Alexander Dubček attempted to institute reforms to soften existing hard-line policy. Later in August, the Soviet Union and Warsaw Pact troops invaded Czechoslovakia to crush the opposition and tow the nation back in line. In subsequent months, reforms were reversed, and suppression strategy became more severe.

Jan Palach, a university student with no history of student activism, was frustrated with the demoralized populace: he wanted to “light a fire” to awaken people. In January 1969, he stood in front of the National Museum at the top of Prague’s Wenceslas Square. He poured gasoline on himself and lit a match, the act of self-immolation as a powerful symbol of protest. He suffered second- and third-degree burns to most of his body; he spent three days in hospital before succumbing to his injuries. His grave in Olšany cemetery became a shrine for the opposition movement. Fearing Palach’s death as ongoing galvanizing symbol, the state secret police exhumed the grave in 1973 and cremated his remains. A year later, the state released his ashes to Palach’s family who buried them in his birth town of Všetaty. After the Velvet Revolution liberated Czechoslovakia from communist rule in 1989, Palach’s ashes were returned to Prague, and reburied in Olšany cemetery in 1990. 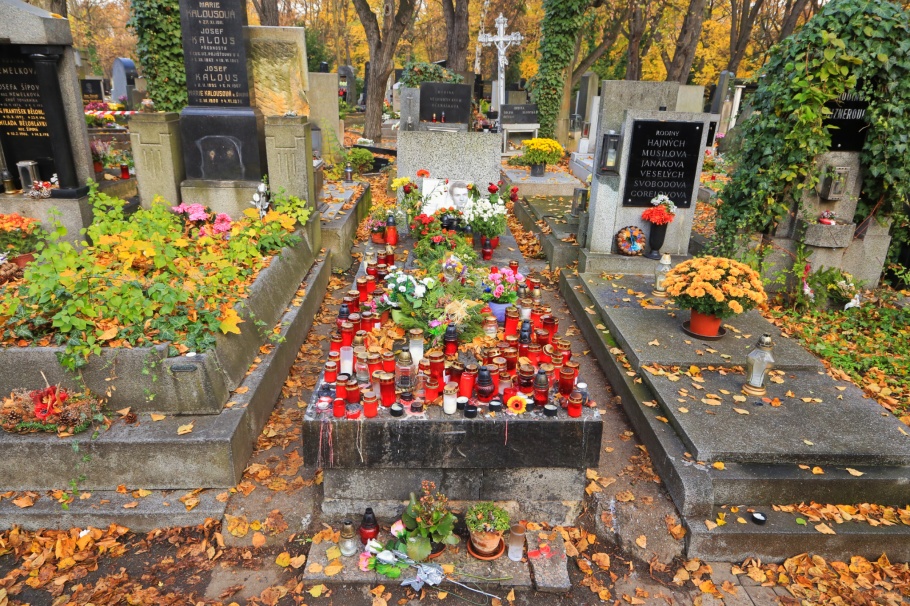 Someone here is highly revered …

At his feet, many candles.

An ordinary-looking grave (V/23/137) contains the ashes of 25 Communist figures and their spouses, including the first Communist president of Czechoslovakia Klement Gottwald. An examination of his story shows an opportunistic ruthless dictator who consolidated power in typically monstrous fashion: purging political opposition with execution or imprisonment. After his death in 1953, Gottwald’s embalmed corpse was put on display at the national memorial on nearby Vítkov hill. Continued failure of expensive preservation efforts meant cremation in 1990, and his ashes were put into this combined grave.

The original (Old) Jewish Cemetery in the city centre’s Josefov eventually ran out of space, and in 1890, a new plot of land outside of the city centre was set aside to establish a new Jewish cemetery. As constituent burial ground of the Olšany cemetery, the New Jewish Cemetery (NJC) is the nation’s largest Jewish cemetery by area (about 10 hectares) and by number of gravestones (over 27-thousand). Protected as national cultural monument in 1958, the NJC remains as the city’s only operating Jewish cemetery with active burials. 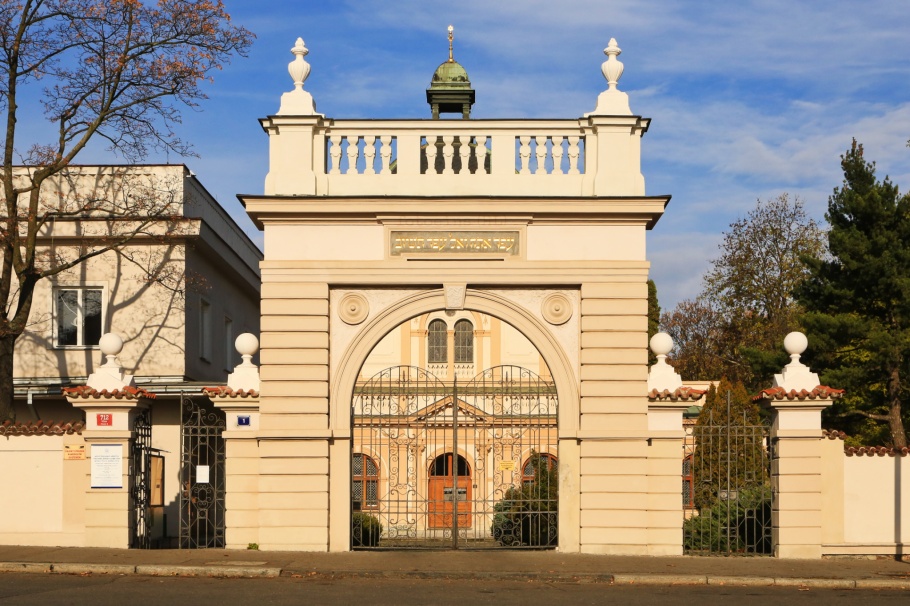 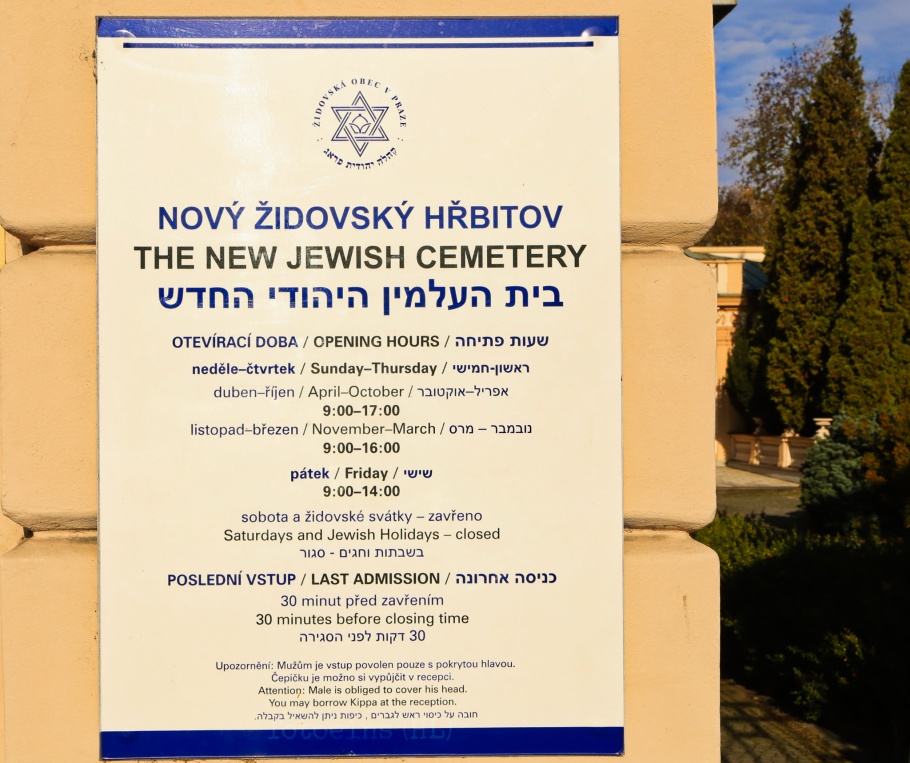 Rear of the cemetery’s main gate: cemetery established in 1890, year 5650 in the Jewish calendar.

All male visitors to the Jewish cemetery must have their heads covered; ‘kippahs’ were freely available at the cemetery entrance. 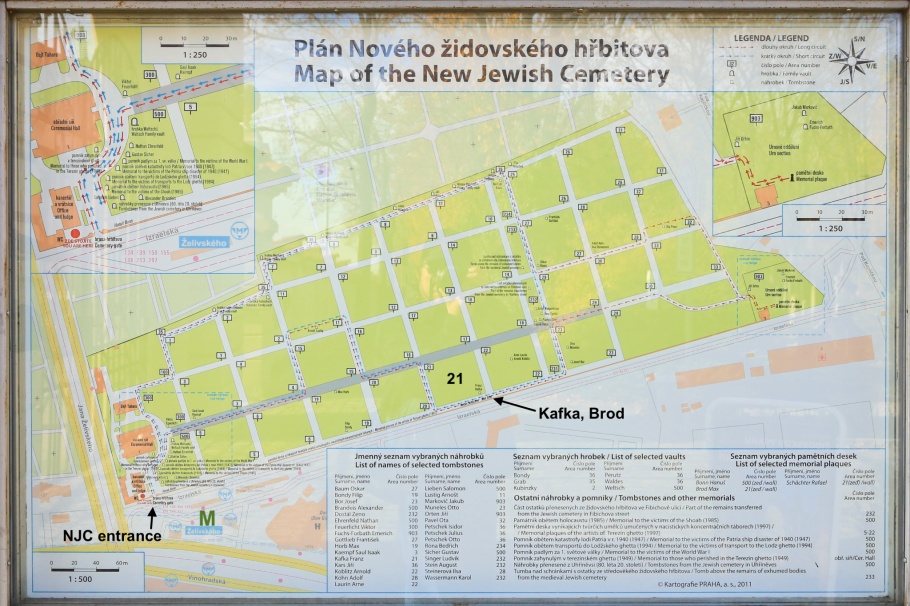 New Jewish Cemetery (NJC), north at top. Marked are a green M for metro A station Želivského, the cemetery’s main entrance, and area 21 including Kafka and Brod. 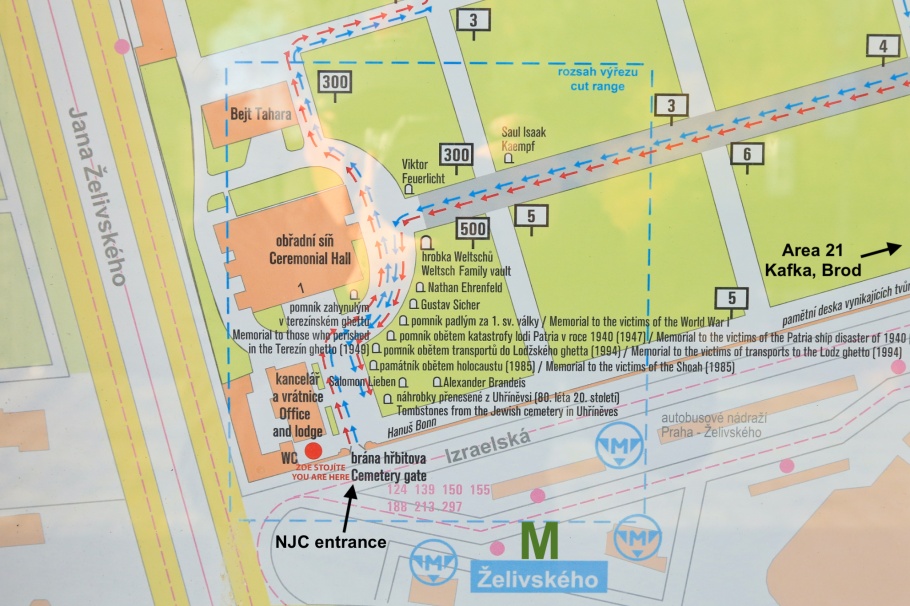 Southwest corner next to the main entrance: north at top, green M for metro A station Želivského.

An small obelisk-like stone marks the final resting spot for Franz Kafka and his parents, Julie and Hermann. A small memorial panel at the bottom of the upright headstone marks a deep tragedy: all three sisters of Franz perished in the Holocaust. For Kafka’s true love Dora Diamant, his early death haunted her for decades.

Southeast corner of area 21: at left is the obelisk-like Kafka family marker, illuminated by sunlight.

Designed by architect Leopold Ehrmann, the Kafka family gravestone is Cubist-style in the shape of a hexagonal crystal and flattened at the bottom.

Dr. Franz Kafka, 1883-1924; he obtained the Doctor of Law degree in 1906. The Hebrew inscription on his gravestone reads as: “Tuesday, at the beginning of the month Sivan 5684. The magnificent, unmarried man, cited above, our teacher and master Anschel, of blessed memory, is the son of the greatly revered R. Henoch Kafka, may his light shine. His mother’s name is Jettl. May his soul be bound in the union of life!” (Radio Prague International)

Opposite Kafka’s grave is a memorial plaque for friend and fellow writer Max Brod. Prague’s Jewish community organized and funded construction and installation of the plaque to Brod. He defied Kafka’s dying wish to have his documents destroyed, and we have Brod to thank for ensuring publication and distribution of Kafka’s works to the rest of the world. Max Brod died in 1968 in Tel Aviv; his grave is in the city’s Trumpeldor Cemetery.

In 2019, the Israel National Library unveiled from their collection a final batch of papers and letters by Franz Kafka. An epic (and nasty) legal battle had contested the “ownership” of documents held by Brod and his friend and personal secretary, Esther Hoffe, for safekeeping. Along with a number of manuscripts and letters by Kafka, the bulk of the documents included novels, plays, and correspondence by Brod (sources: one, two, three).

Next to the front gate of the New Jewish Cemetery are memorials to murdered victims of the Holocaust. 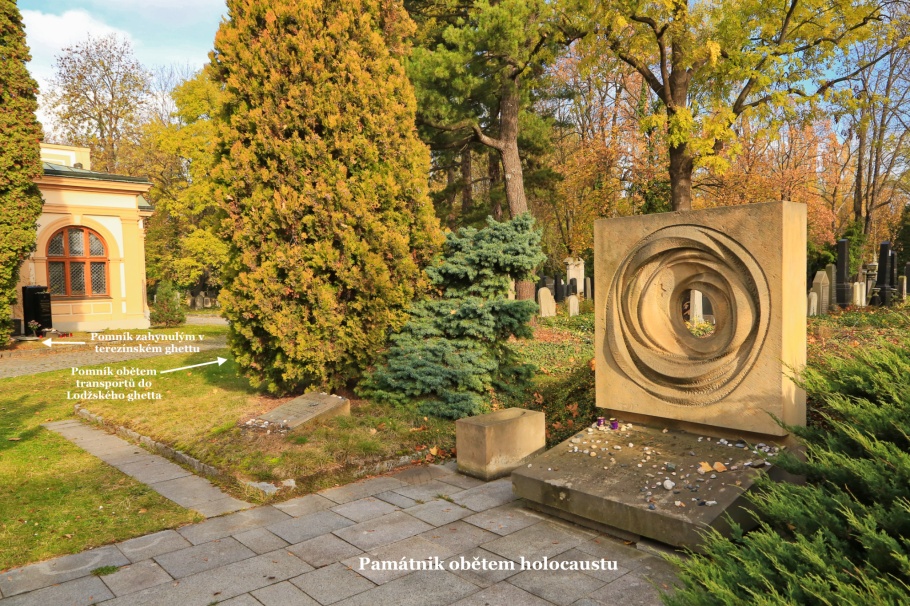 The inscription reads: “Na paměť těch, kteří svou poslední cestu začali v transportech do ghetta Lodž na podzim 1941.” // In memory of those who were deported to the Łódź ghetto in autumn 1941 and perished in the Holocaust. 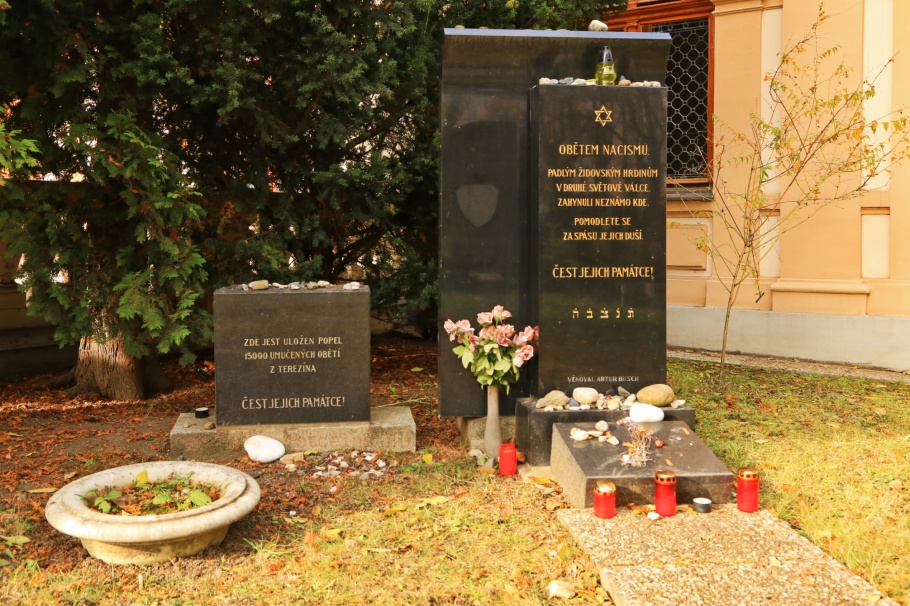 •   Memorial to Czech victims of the Shoah.
•   1985 monument of Czechoslovak Jews, victims of holocaust and resistance movement: a system of hollow eclipses in the centre of which an impression of David’s Star resides. Built by sculptor Zdeněk Vodička and architect Vladimír Stehlík. ( Vets.CZ ) ( Prague.EU ) 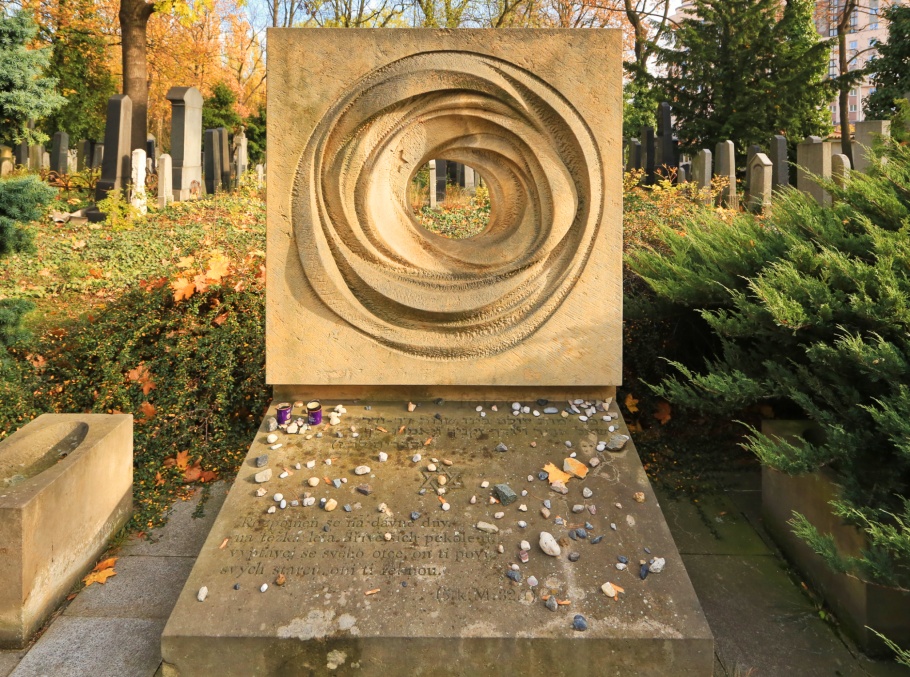 Located at address Vinohradská 1835/153, there is no admission charge to enter and walk around the cemetery. Opening hours is always 8am, but closing hours depend on season: January and February, at 5pm; March and April, at 6pm; May to September, at 7pm; October, at 6pm; and November and December, at 5pm. As always, check the website for updates.

The New Jewish Cemetery at Izraelská 712/1 is located at the intersection of Izraelská, Jana Želivského, and Vinohradská. There is no admission charge to enter and walk around the the cemetery. Opening hours are: Sundays to Thursdays, 9am to 5pm (April to October), and 9am to 4pm (November to March); Fridays 9am to 2pm; closed Saturdays and Jewish holidays.

While Kafka and Brod frequently met in Prague’s cafés, it’s possible they also met Albert Einstein who spent time teaching in Prague. I made all photos above on 7 November 2016 with a Canon EOS6D mark1. This post appears on Fotoeins Fotografie on fotoeins DOT com as https://wp.me/p1BIdT-eMP.

7 Responses to “My Prague: looking for Kafka & Palach in Olšany”