Above/featured: Continental Divide. Rising to the north are red Entrada sandstone cliffs (Iyanbito member) from the middle Jurassic period about 170 million years ago. The cliffs are part of a geologic formation extending from northwest New Mexico into northeast Arizona, southeast Utah, and west-central Colorado.

The following takes place entirely within day 8 (of 15) on our drive through the American Southwest. From Santa Fe, New Mexico to our destination Flagstaff, Arizona, the day-long drive began on the short leg I-25 south to Albuquerque. This stretch of I-25 is along a part of the colonial road El Camino Real and parallel to the pre-1937 alignment of the now-famous highway US route 66 (US-66). In Albuquerque, we turned right onto I-40, heading westbound for the New Mexico-Arizona state border and beyond. The total distance was a little over 650 kilometres (400+ miles).

We’d already spent a couple of days in Albuquerque for the annual hot-air balloon festival, and we saw where US-66 had intersected itself in the city centre. In its initial alignment, US-66 from Santa Fe passed through Albuquerque north to south as 4th Street. After the highway’s realignment in 1937, US-66 skipped Santa Fe and passed east to west as Central Avenue through Albuquerque’s downtown and historic Old Town. These two alignments intersect at Central and 4th. Nearby is the historical landmark KiMo Theatre on Central Avenue, one of many city highlights I described here.

The road segment of US-66 labelled state road NM-122 serves as frontage road next to I-40 between Milan and the unincorporated community of Continental Divide. West from Milan, a 9-mile stretch is a four-lane road completed in 1951 when several sections of US-66 were widened. The remaining 23 miles narrows into a two-lane road which runs parallel to I-40 and above the tracks of the former Atchison, Topeka and Santa Fe Railway (ATSF Railway). The road ascends towards Continental Divide, where US-66 reaches its highest elevation of 2214 metres (7263 feet) at Campbell Pass. The frontage road becomes a closed cul-de-sac just west of Continental Divide (NPS). The North American continental divide is a geographical ridge forming a watershed which separates rivers flowing west into the Pacific Ocean from rivers flowing east into the Gulf of Mexico and the Atlantic Ocean.

On the Pacific side of the divide.

Only 35 kilometres (22 miles) from the New Mexico-Arizona border, we stop at Gallup, a railway depot town and a stop for weary drivers on the highway. We’re in town to see a mural dedicated to the Navajo Code Talkers who served as part of U.S. forces in the Pacific theatre of World War 2. Gallup is considered an unofficial capital of and gateway into Indian country and the Navajo Nation in New Mexico. There’s always surprises and we found our bonuses with a Lloyd Moylan 1940 “History of the Gallup Region” mural inside the McKinley County Courthouse and at the old-school charming nostalgia of driving culture inside the Hotel El Rancho.

A part of the Navajo Code Talkers mural by New Mexico artist Be Sargent. 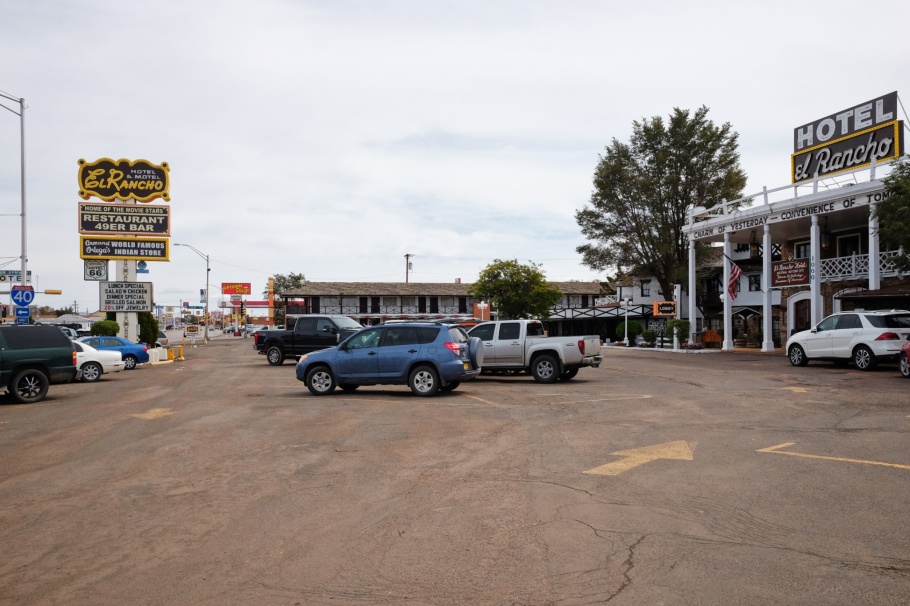 At our next stop, I thought we might spend an hour or two at most. We departed the area a full four hours later, happy for the mistaken assessment. A complete drive through the Petrified Forest National Park is about 45 minutes non-stop, but there are plenty of stops. Including the national historic landmark Painted Desert Inn, the Painted Desert provides a bounty of reds, browns, oranges, blues, greens, and purples in the sandstone rock formations. Further to the south are remnants of petrified wood as brightly coloured stone logs collected together by old river systems and scattered throughout the landscape. The ages of the coloured rocks and stone logs are over 200 million years. Another extra bonus is this is the only place in the country where US-66 intersects with a national park.

With a rusting Studebaker to the side, the poles in the background trace the former path of US-66; behind the poles is highway I-40.

Heading west from the park’s southern entrance, it’s a short 31-kilometre (19 mile) drive to Holbrook with a first sighting of the Little Colorado River. It’s well into the afternoon when we arrive in town. We can’t spend as much time in town, but we make one stop at the famous and picturesque Wigwam Motel. I think the commercial symbolism is an anachronism, but the present-day site continues the vision of classic American nostalgia along US-66. 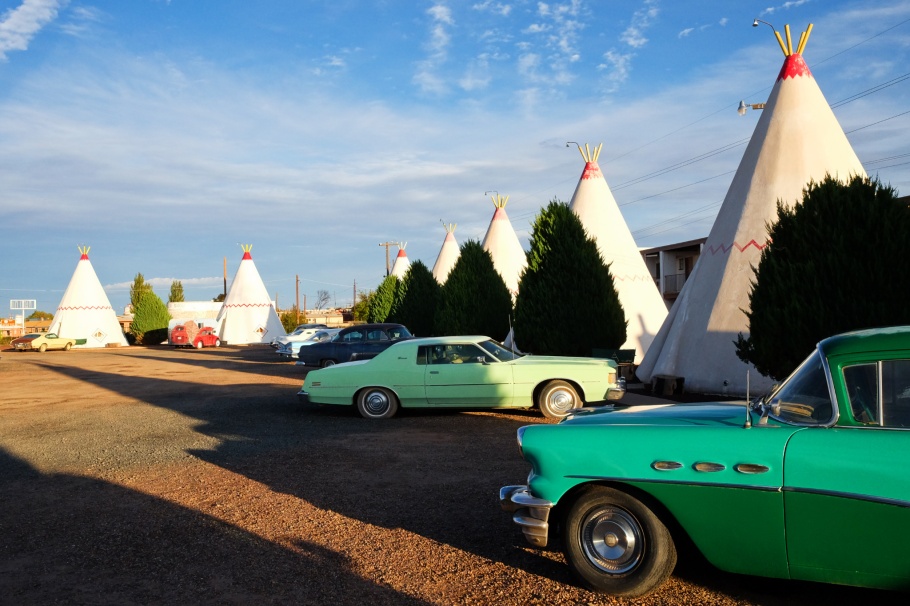 Late-afternoon light, yearning for a time long past.

The course of the Little Colorado River parallels with I-40 until our arrival in Winslow, where we head straight for a piece of history encompassing town, rail, and hospitality. The town’s La Posada Hotel was one of the last hotels for the ATSF Railway and was one of the most luxurious hotels on US-66; “posada” is Spanish for “inn” or “guest house.” The hotel was completed in 1930 and considered one of Mary Colter’s architectural masterpieces. In town at the corner of North Kinsley Avenue and West Second Street is a direct artistic reference to the Eagles’ 1972 song “Take It Easy”:

Well, I’m a-standing on a corner
In Winslow, Arizona
Such a fine sight to see
It’s a girl, my Lord
In a flat-bed Ford
Slowin’ down to take a look at me

N Kinsley Ave. & W 2nd St.: there’s someone standing at the corner, next to a red Ford flat-bed truck.

Central to many nature locations and geological formations in the area, Flagstaff provided a convenient “stop point” to begin our exploration of the Grand Canyon’s North Rim and South Rim. The city is also one of Arizona’s largest communities related to US-66 history and legacy. The heritage landmark 1926 ATSF railroad depot building is located just east of the present-day building housing the Amtrak station and the city’s Visitor Center. A 2013 mural by Mural Mice depicts the city’s history with US-66 is on the back wall of Lumberyard Brewing, located one block south of both railway depot and current US-66 alignment.

We also got great tips to eat at Satchmo’s and at Galaxy Diner.

Partly obscured under early-autumn snowfall is the historic railroad district at left and the Downtowner Motel tower sign at right (16 Oct 2018).

I made all pictures with a Fujifilm X70 fixed-lens prime on 9, 12, and 16 October 2018. Thanks to AB for making this memorable trip possible. This post appears on Fotoeins Fotografie at fotoeins DOT com as https://wp.me/p1BIdT-eGx.

1-day drives in the American Southwest

20 Responses to “1-day drive in the US Southwest: Santa Fe to Flagstaff”