This is the start of a series on day trips and drives from our time in the American Southwest. The following takes place entirely within day 7 (of 15) in New Mexico between Santa Fe and Abiquiú.

Georgia O’Keeffe (1887-1986) is known as one of the best known modern American artists. Born in Wisconsin and educated in Chicago, her art came to light in New York City where her name and work became prominent. While teaching in Texas, she visited New Mexico for the first time in 1917. She fell in love with the landscape of New Mexico on subsequent visits in the early 1930s, and in 1949 she moved to the Abiquiú area where she would live for the rest of her life.

As fans of her art, we’re taking the day to drive up from Santa Fe to the town of Abiquiú. We wanted to see Georgia O’Keeffe country: the landscapes from which she drew inspiration, and the land that nurtured her spirit and fuelled her creativity.

Before our guided tour of O’Keeffe’s Abiquiú home, we stop at the Purple Adobe Lavender Farm next door to have a look. We like it so much we return after the guided tour to the farm’s café for a snack. We then make the short drive northwest onto the Ghost Ranch property to check out the ancestral lands of the Navajo Apache and Tewa pueblos. O’Keeffe recognized the importance some of that history, as she related in an 1967 interview for the Los Angeles Times’ “West” magazine:

When I think of death I only regret that I will not be able to see this beautiful country anymore, unless the Indians are right and my spirit will walk here after I’m gone.

On our return drive to Santa Fe, the sun sets over our section of the Southern Rocky Mountains, and I swear the late-afternoon breeze whispers the spirits of the Chama river, Georgia O’Keeffe, and all the souls who’ve inhabited the area.

O’Keeffe purchased in 1945 an old adobe house complete with irrigation rights from the nearby Chama river. Thanks to friend and fellow artist Maria Chabot, her contract and construction work converted the once-derelict structure into a liveable and cherished home. The Abiquiú house became O’Keeffe’s winter home and it’s where she created and cultivated her fruit and vegetable garden. “… Inside and out, the details (of her home) were so striking – so uncluttered, so responsive to light, so lovingly arranged …” was the succinct description by photographer Myron Wood in his foreword for the 1995 book “O’Keeffe at Abiquiu“. The O’Keeffe home and studio in Abiquiú is listed on the U.S. National Register of Historic Places and designated National Historic Landmark since 1998 (reference number 98001197).

Access to the O’Keeffe Abiquiú house is available only with a guided tour which must be reserved for a specific date and time from the Georgia O’Keeffe Museum. With our booking for a “standard” one-hour guided tour purchased several months in advance, we arrive and park without charge at the Abiquiú Inn. On the same property is The O’Keeffe Welcome Center where we register for our tour. Each tour is capped at a dozen people or so, and we’re bundled into a small school bus for the short drive to the property. We thank Frank Shelton for his wonderfully informative guided tour. The grounds and the house exterior can be photographed, but the interior cannot be photographed, which is why I’ve included a still from a video made by the O’Keeffe Museum and photographs of approved photographs (how meta). 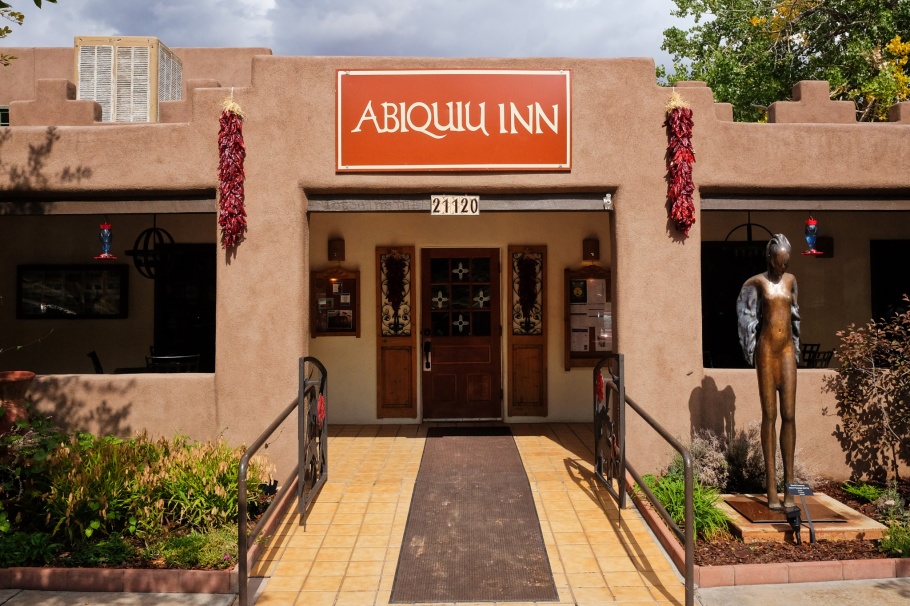 Start by pulling into parking area for the Abiquiú Inn where we’re greeted with adobe and ristras.

Walk on over next door to the O’Keeffe Visitor Center. 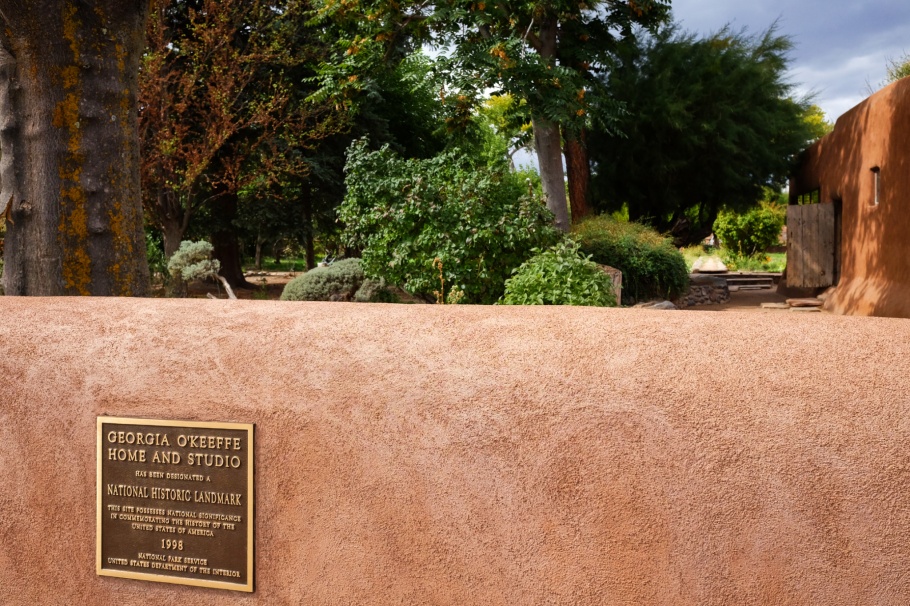 As her sight diminished, O’Keeffe highly valued the smooth feel of small stones, including those from the nearby Chama river.

O’Keeffe loved gardening; the O’Keeffe Museum has a live webcam over her house garden.

Channels were built to move water drawn from the Chama river throughout the garden.

East view from her studio: US route 84 winding below Mesa de Abiquiú in the Rio Chama valley.

Her living room; frame from video by the Georgia O’Keeffe Museum.

Pots and pans in her pantry (O’Keeffe Museum).

Her kitchen and pantry (O’Keefe Museum).

The famous zaguán between main entrance and patio, with a large elk horn rack over the passageway.

The famous black door, a big reason why O’Keeffe bought this house. 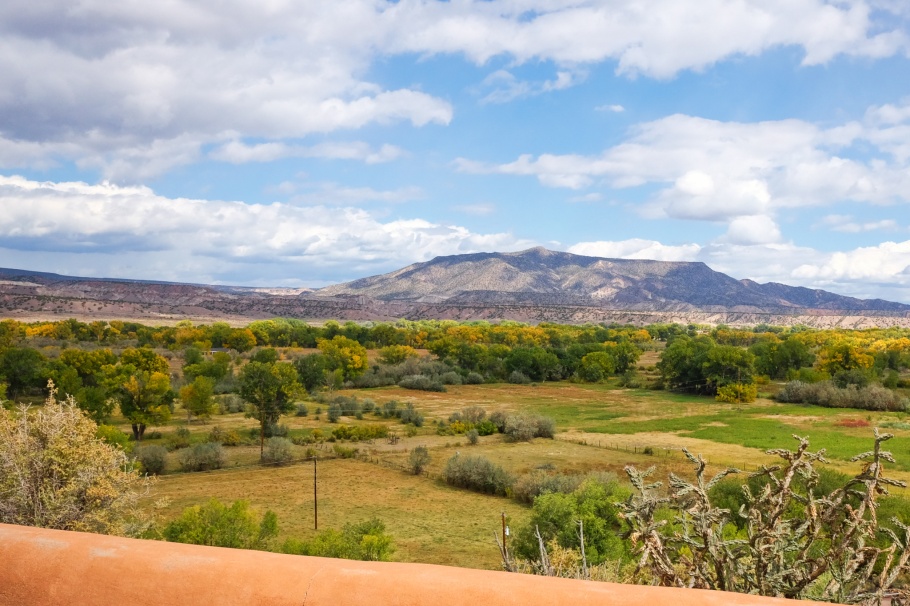 One last look from her backyard: northeast to the Rio Chama valley and Sierra Negra mountain (elevation 2454 metres).

From her first stay in the area in 1929, O’Keeffe hiked and explored the isolated area. She purchased in 1940 the Rancho de los Burros house under the cliffs at Ghost Ranch, but it wasn’t until after Stieglitz’s death that she moved to New Mexico for good in 1949. Between her properties in Abiquiú and Ghost Ranch, the latter was her favourite where she would stay in summer.

The entrance to Ghost Ranch is marked by a welcome gate off highway US-84, about 14 miles northwest of Abiquiú. The entire property is owned and operated by the Presbyterian Church as an education and retreat center. Not far from the main highway are an unoccupied log house and cattle pen (constructed and used as a movie set). There are sweeping views with neighbouring buttes and mesas, Chimney Rock to the north, and Abiquiú Reservoir and Cerro Pedernal to the south. Ghost Ranch was also known as “Rancho de los Brujos” or Ranch of the Witches.

The O’Keeffe house on Ghost Ranch is closed to the public. You can view this time lapse from her house, and you can read about the property here and at Architectural Digest (2016). Other tours are available from Ghost Ranch.

Open gate from highway US-84.

This, is O’Keeffe Country.

Northwest view. Somewhere in this shot is O’Keeffe’s summer home, Rancho de Los Burros, which is closed to the public.

US 84, between Abiquiú & Ghost Ranch

It’s the view and the colours that’ll stop anyone in their tracks. Surrender to the inevitable, slow down, and pull over to the side. You’ll park and step out and marvel at the scenery, of reds, blues, and greens, of the flowing river below, and of the looming cliffs above. 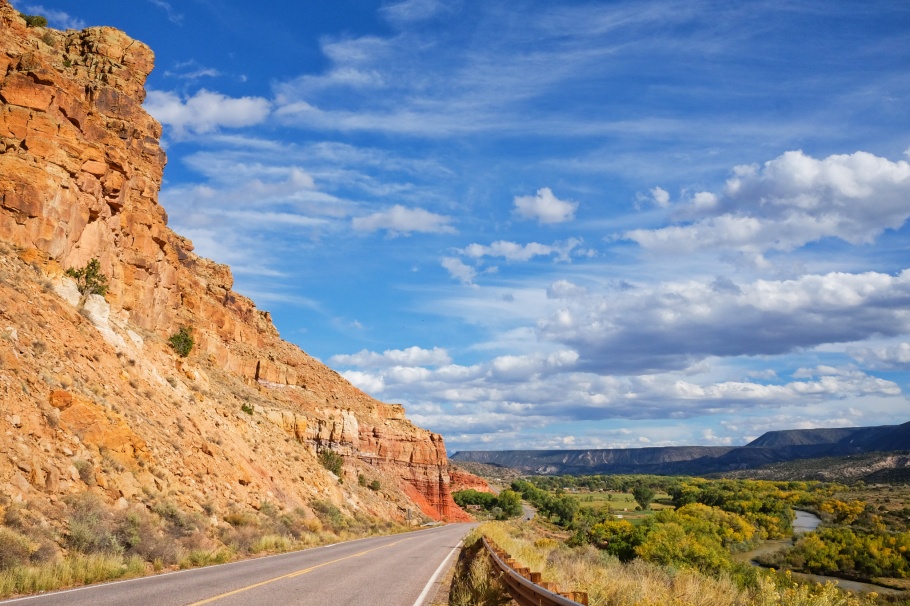 “Georgia O’Keeffe (1887–1986): One of America’s great and most celebrated painters of the twentieth century, Georgia O’Keeffe is known for her unique depictions of natural and architectural forms. She began spending summers painting in Northern New Mexico in 1929 and moved from New York to make it her permanent home in 1949. The Georgia O’Keeffe Museum was founded in 1997 in Santa Fe to honor her legacy and extraordinary achievement.”

We’re back in town and make the turn onto the narrow dirt road to the lavender farm. While mid-October is the end of growing and operating season, the farm is still a beautiful expanse of low-lying land tucked between the Chama river, highway US 84, and Mesa de Abiquiú. There’s a familiar scent in the open fields, but when we step inside the Tea House, that’s our welcome blast of lavender. There are various lavender-related items for sale, but we’re interested in food and drink made or infused with lavender. We relax outside on the patio on a sunny autumn afternoon, and both of our imaginations run wild with purple blooms as far as our minds’ eye can see. 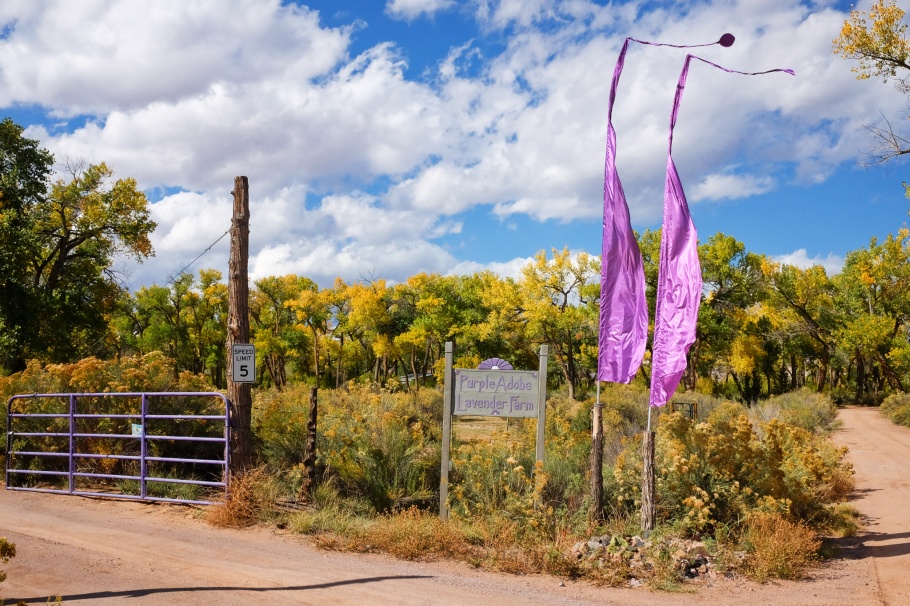 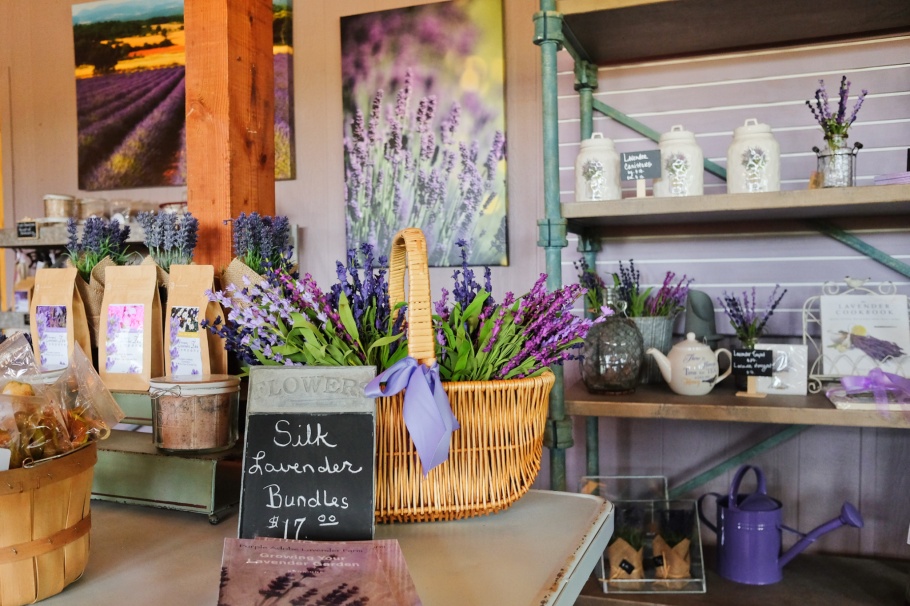 I made all photos above on 10 October 2018 with a Fujifilm X70 fixed-lens prime. Thanks to AB for making this memorable trip possible. This post appears on Fotoeins Fotografie at fotoeins DOT com as https://wp.me/p1BIdT-cP5.

Postscript: many months afterwards, I realized we had passed the town of Hernandez twice on our drive between Santa Fe and Abiquiú. Hernandez is the location of a well-known image by Ansel Adams of a moonrise in 1941.

1-day drives in the American Southwest

18 Responses to “1-day drive in the US Southwest: Georgia O’Keeffe country”