I’m looking for a “thousand-year history” in the city of Worms located in southwest Germany. This has nothing to do helminthology or nematology, as the town’s name is derived from “Warmaisa”, the former Jewish name of the city. This is about an important part of Jewish-German history and peaceful coexistence of the Judeo-Christian communities within Europe. The town’s fame and reputation is also partly derived from Martin Luther; I’ve already visited the site where Luther was on trial to answer charges of heresy, as well as the world’s largest Reformation monument.

This part of the Rhein river area is considered the “cradle of European Jewry”, known also as “little Jerusalem on the Rhine.” In medieval times, flourishing Jewish communities in the cathedral cities of Speyer, Worms, and Mainz facilitated the creation of a common Jewish league with the name ShUM (SchUM), spelled out by the first letters of the Hebrew names for the three cities. As emphasis on the influence of Jewish heritage in Europe and the ongoing process of preservation and education, the Holy Sand cemetery is one of four constituents in the newly inscribed UNESCO World Heritage Site (2021).

On a breezy late-autumn afternoon, light fades quick, casting solemn shadows on this ground. In the town’s old Jewish cemetery, I’m the only person present, and I’ve placed a small stone on top of a number of gravestones. I’m surrounded by apparitions over an millennium’s age and by the remaining physical traces in various shapes, stones, and size.

The Holy Sand is the oldest preserved Jewish cemetery in Europe. The cemetery is evidence of a Jewish community existing in Worms since about 1000 AD/CE. The community in Worms likely began construction of the cemetery simultaneously with or shortly after the consecration of the synagogue in 1034 AD/CE. One story about the cemetery’s name “Holy Sand” was about pilgrims depositing in this cemetery sand brought back from Jerusalem. Many old graves remain buried underground in sand. In the oldest section of the cemetery, most of the graves face south, but the reasons why aren’t clear.

In the Rabbinertal (valley of the Rabbis), the gravestone for Rabbi Jakob Molin (1427) is the only stone facing east towards Jerusalem; legend states that he specifically asked for his gravestone to point east. Between the Rabbinertal and the southern entrance to the “new” section (18th-20th century) of the cemetery, two gravestones stand side-by-side. They are dated 1058-1059 AD/CE and 1076-1077 AD/CE: these two are the oldest dated gravestones in the cemetery. A new Jewish cemetery was constructed next to the main cemetery (Hauptfriedhof Hochheimer Höhe) by 1911, and burials in the old cemetery ended by the late-1930s.

The old Jewish cemetery survived the bombing raids of World War II and post-war reconstruction. Today, the cemetery holds over two thousand graves, and is maintained by the Jewish Congregation of Mainz. A key destination for thousands of Jewish pilgrims from around the world, the cemetery is a significant historical and cultural landmark for the city of Worms, the Rhenish-Hesse (Rheinhessen) wine-growing region, and the federal state of Rhineland-Palatinate.

Poking through the heavy clouds, the sun announces its final presence, throwing bright beams across the grounds and graves. The breeze picks up and swirls around and over the graves. Shrivelled leaves scatter, carried aloft, floating, fluttering, and mimicking the distant memories of all those who once lived and thrived in the Jewish community about 1000 years ago.

Gravestones with Hebrew inscriptions and German translations and descriptions are from the Salomon Ludwig Steinheim Institute of German-Jewish Studies; all years listed are in AD/CE. 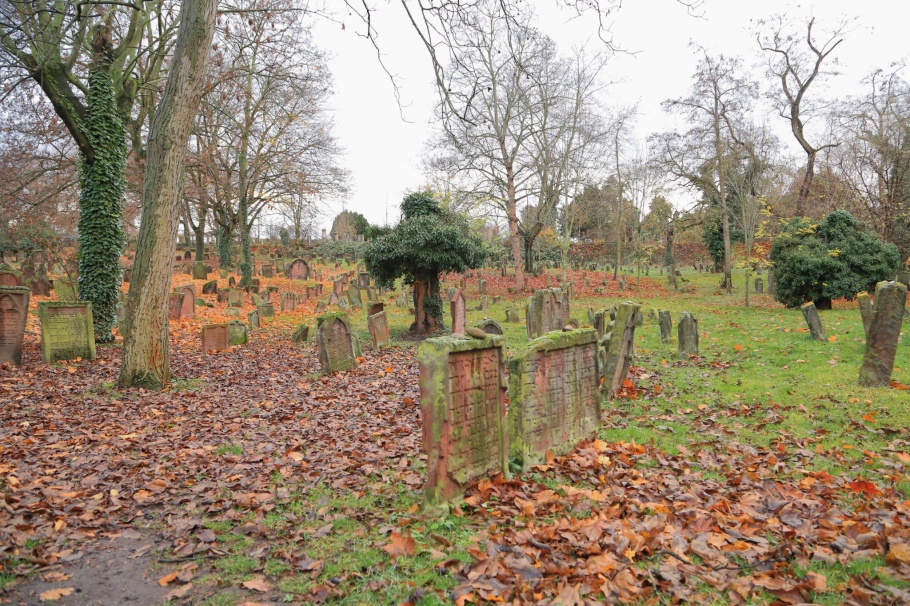 1. Inside the cemetery’s main entrance; note the stubby tree at centre.

2. Rabbi Meir ben Baruch (MaHaRaM) and Alexander ben Salomo at centre-left and -right, respectively. The stubby tree is the same seen in picture no. 1.

3. Southern part: two of the oldest graves in front of Rabbinertal (The Valley of Rabbis); note the tree with striped bark at centre in the background. 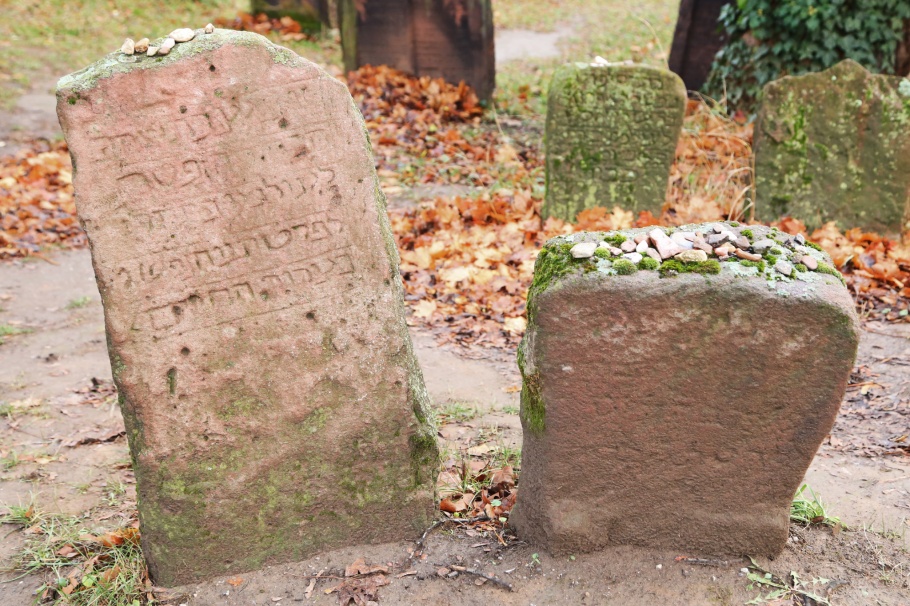 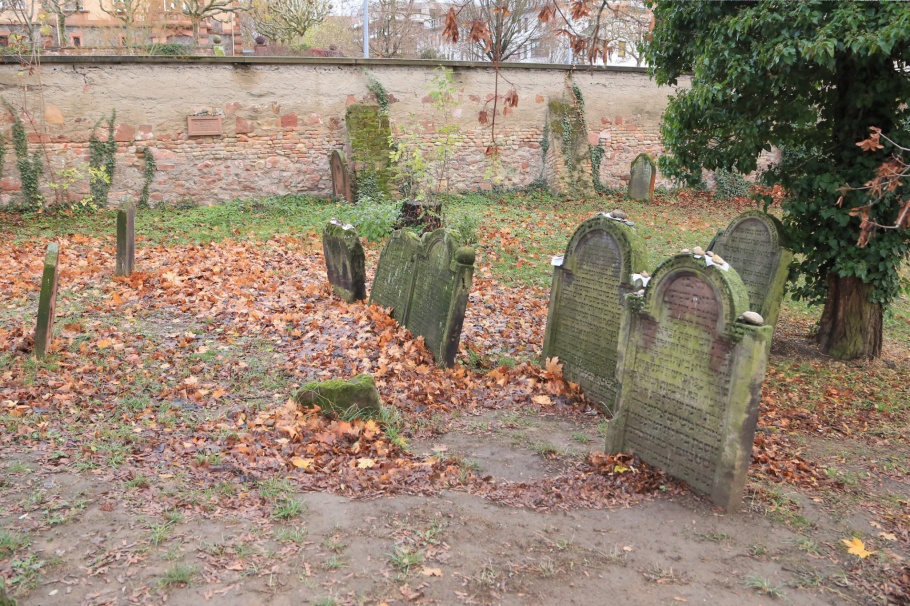 5. Rabbinertal: closest to the tree, the stone at right leaning towards the tree is the grave for Rabbi Moses Bacharach.

6. Rabbinertal: south to boundary wall and Willy-Brandt-Ring beyond; tree with striped bark at left is the same as in picture no. 3.

10. Map display; I’ve added labels in English for clarity. The location of pictures 11 to 14 is near the “7” position shown here in the map.

+ A small sign is common to these four images near the south-central location; this same sign also appears near the cemetery’s entrance. The sign reads as:

The Holy Sand cemetery in Worms is considered the oldest Jewish cemetery in Europe. There are in all about two thousand graves known; countless more are buried under this trail. Out of respect for those who remain in this sacred ground, please remain on the marked paths.

15. About mid-cemetery, facing the setting sun. 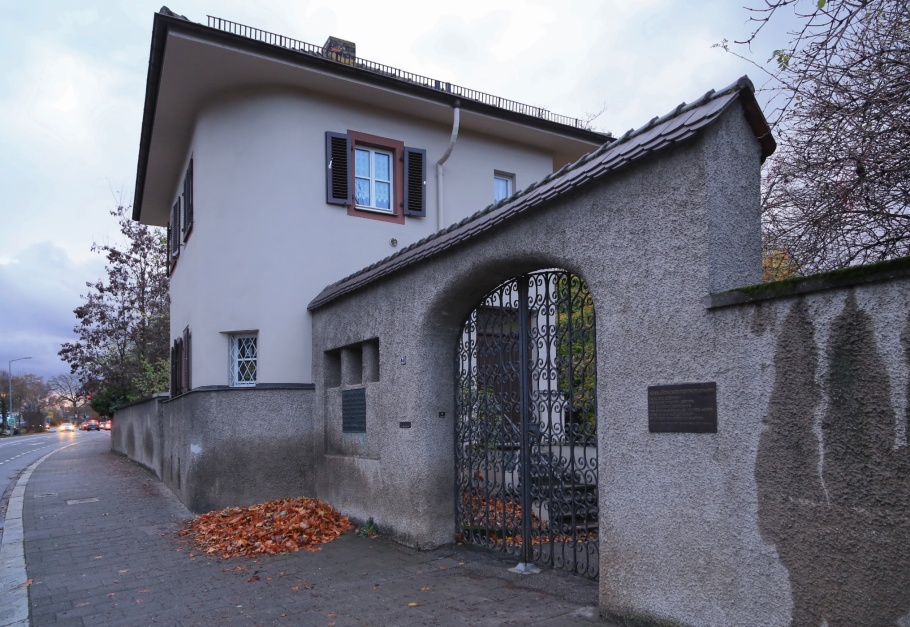 17. Street entrance, cemetery gate, a plaque on each side. 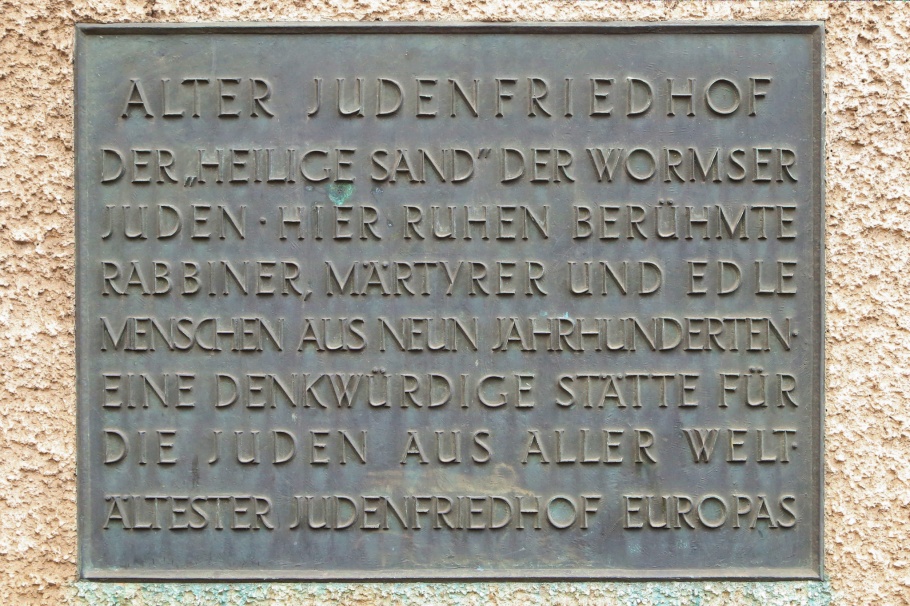 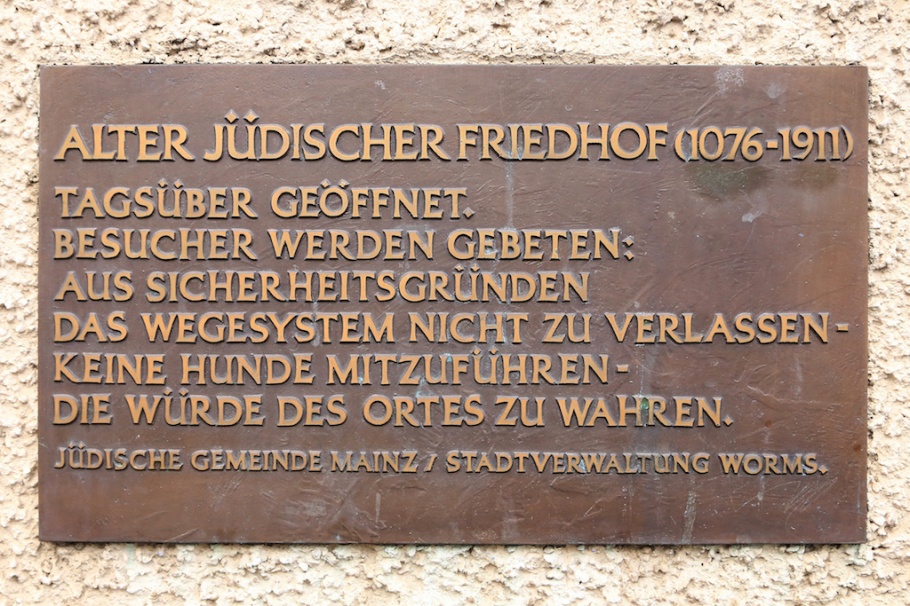 With regional trains, Worms is about 30 minutes from Mannheim and about 80 minutes from Frankfurt am Main (via Mainz or Mannheim). The “Holy Sand” Jewish cemetery is a ten-minute walk from Worms Hauptbahnhof or main train station. The cemetery is generally open every day, but closed on Saturdays for Sabbath and on Jewish holidays; check and confirm specific hours. There is no admission charge.

Thanks to Worms Tourismus, to Bettina Mauer for a guided tour of the city, and to Romantic Germany and Rheinland-Pfalz Tourismus for their assistance and support with cities along the Rhine. I made the photos above on 21 and 22 November 2015. This post appears on Fotoeins Fotografie at fotoeins DOT com as http://wp.me/p1BIdT-7MZ.