I’m neither tragic nor hip, but I know a little bit about Canadian icon and band, The Tragically Hip, and specifically, a song of theirs called “Springtime in Vienna.”

I can’t play a musical instrument, but I especially liked listening to a performance of Johann Strauss II’s “An der schönen blauen Donau” (The Blue Danube) on an intercity river catamaran between Vienna and Bratislava.

What I’m totally convinced is when spring comes calling, I’m allergic to nature. I’m a living example to irritation and inflammation, and living consequence to nature’s response to spring.

S is not just for entropy

I can’t say I’m surprised by my body’s reaction, with memories of spring in Heidelberg, Germany from long ago. But I’m surprised by the intensity at which my eyes and nose are “vigorously rebelling” against the different tree and flower pollen throughout Austria.

I suppose one goes about life attempting to accommodate as many things as possible, and then, to remove what’s detrimental, and keep what’s beneficial. Most will say time in nature has clear benefits: physical exertion, social networking (for reals), and fresh air. The first is agreeably necessary, the second is dubious in the age of the mobile’s reach, whereas the third comes with a big qualification. One conclusion I keep coming back to time and time again is that nature in spring is simply a declaration of war on my eyes and nose. What happens next is frankly unseemly when my eyes become collecting centres for thin strands of rheum and my nose becomes an overactive production centre for mucus.

I’ll be all right, and by the time I arrive in the Austrian capital, I learn to accommodate the distraction and lack of sleep. Besides, I understand the coffee’s pretty good here in town. I begin the day with eyedrops and equipped with tissue packets, I’m on another academic pilgrimage, this time to Vienna’s Zentralfriedhof (Central Cemetery).

This piece is also partly about entropy in the branch of physics called statistical mechanics1, and how it’s related in a way to my unstoppable allergies. The concept of entropy is at the very heart of The Second Law of Thermodynamics. Entropy is a measure of a system’s energy that is unavailable for work or of the degree of a system’s disorder; entropy in the universe never decreases. In the 19th-century, scientists such as Ludwig Boltzmann provided a statistical basis to describing entropy. In 1877, Boltzmann defined entropy to be proportional to the logarithm of the number of individual ‘microstates’ occupied by a physical system. For a gas consisting of N particles (typically N is 10^23 or 1 followed by 23 zeros) at room temperature and atmospheric conditions, the number of microstates, W, goes as exp(N) or the exponential of N, which is a staggeringly large number. 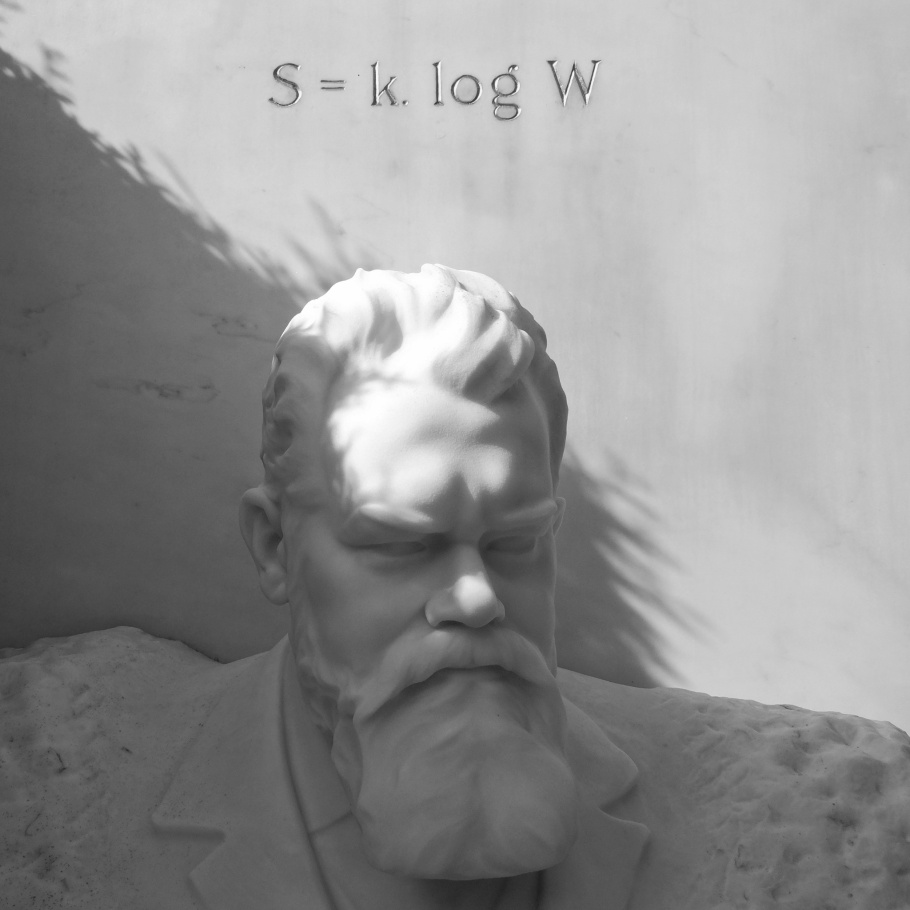 After a few minutes of wandering various avenues in the cemetery, I find the grave for Ludwig Boltzmann. Appearing above Boltzmann’s solemn sculpted head is the equation for entropy, S:

This is the Boltzmann entropy equation, familiar to all who encounter thermodynamics and statistical mechanics as part of their physics education.

I imagine S might have once been related to microSTATES, but I believe W is related to the German word for probability: “Wahrscheinlichkeit.” The constant k is now known today as the Boltzmann constant. From a classroom decades ago at Simon Fraser University to standing present-day in a cemetery on the other side of the world, my hand rests on the cool white marble of the grave. Which is then promptly followed by my gusty sneeze.

Not only does S represent entropy, it’s also for Sneezy, Scratchy, and Snotty. I blow my nose for the Nth time, and I leave Boltzmann behind to search for Beethoven, Brahms, and Strauss. I can’t help but think about how my response to spring isn’t abating and how it might not go away. It is after all the delicious affliction of time spent in Europe, this one week in mid-May, in the full bloom of springtime in Vienna.

Boltzmann also appears as a monument in the courtyard arcade at the University of Vienna. The monument caption reads as: 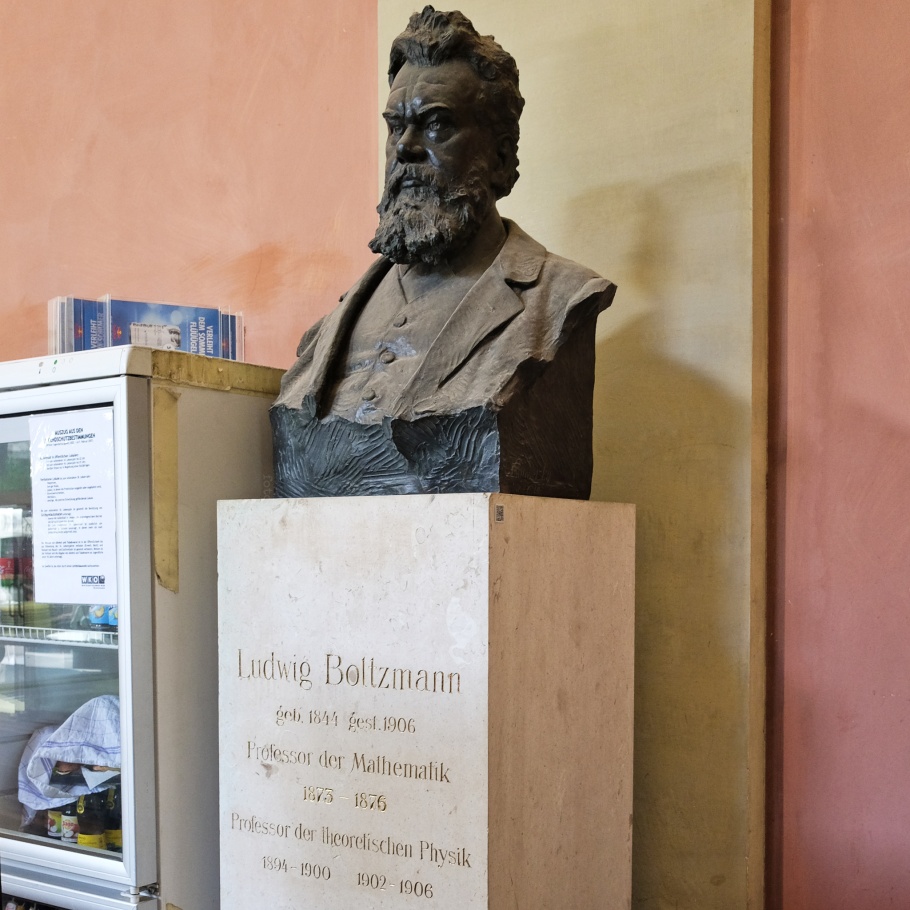 1 Statistical mechanics is a branch of physics where the description of a macroscopic physical system is in terms of the statistics of the motions of the microscopic constituents of the system. In a university-level physics program, ‘stat mech’ is typically introduced as a one-semester course or series of lectures at the sophomore to junior level which follows a one-semester course on thermodynamics.

I made all images on 16 and 20 May 2018 with a Fujifilm X70 fixed-lens prime. This post appears on Fotoeins Fotografie at fotoeins DOT com as https://wp.me/p1BIdT-bS3.

9 Responses to “My Vienna: finding Ludwig Boltzmann in spring”