Above: View of the town from Mansfeld Castle; numbered labels are described below.

I approach the ledge, and what appears is a typical yet modest German town: red roofs, a church steeple, green pastures, and endless hills rolling to the horizon. But this is no typical town. Five centuries ago, a young lad grew up in this town and ran through these streets. Though the area was dominated by mining activity, Dad was grooming the boy to become a lawyer, but the latter would make a life-changing decision. How was the boy to know his decision and subsequent work would eventually change religion, governance, literature, and culture in Europe.

Mansfeld is a town of about 9000 people in the southwest corner of the German federal state of Saxony-Anhalt. The town is dominated by the Mansfeld Castle situated on a rock spur above town. With origins to regional nobles, first mention of the town in official documents occurred in the late-10th century, erection of the castle’s foundations began in the 11th-century, and full charter rights of a city were granted to Mansfeld in the early 15th-century.

In 1484 one year after he was born and baptized in Eisleben, Martin Luder’s parents, Hans and Margarethe (née Lindemann), moved the family to Mansfeld, 10 kilometres to the northwest of Eisleben. Hans Luder earned good wages in a region rich with mineral ore and covered with mines. Hans first worked in the quarries, and worked up to managing smelting furnaces, and eventually, to owning individual mine shafts and smelters. Martin wandered these streets until he was 13 years of age when he departed in 1497 for further education. His parents stayed in Mansfeld for the rest of their lives, whereas Martin moved to Magdeburg, Eisenach, Erfurt, and settling in Wittenberg.

As indicated in the featured image, the town’s highlights include:

Although Martin Luther spent much of his working life in Wittenberg, he always had a special fondness for the town where he was raised. He once wrote of Mansfeld:

2017 marks the 500th anniversary of the Reformation.

1650 copy of copper engraving of Manßfeldt (Mansfeld), in “Topographia Superioris Saxoniae, Thüringiae, Misniae et Lusatiae”, part of “Topographia Germaniae”, by Matthäus Merian (Wikimedia). The St. George town church is seen at lower-left, but the castle dominates the scene at right.

Martin Luther’s parents lived in a modest house and spent his childhood years walking through these streets. Across the street from his parents’ house, the town unveiled in 2014 the Museum Luthers Elternhaus, a museum dedicated to Martin’s parents, their family life, and how the people of Mansfeld lived in the late 15th- to early 16th-century. Martin’s father, Hans, worked his way up from coal miner (hewer) to becoming part owner in a number of local mining operations. He became a citizen of Mansfeld (acquiring full rights) with his name mentioned as a “town deputy” in an official document in 1491. The recent archaeological dig at the house and subsequent finds show that the Luther family had status in local society and they lived and ate reasonably well.

The building here is a reconstruction and houses the town’s tourist information office. A plaque hangs over the front door: 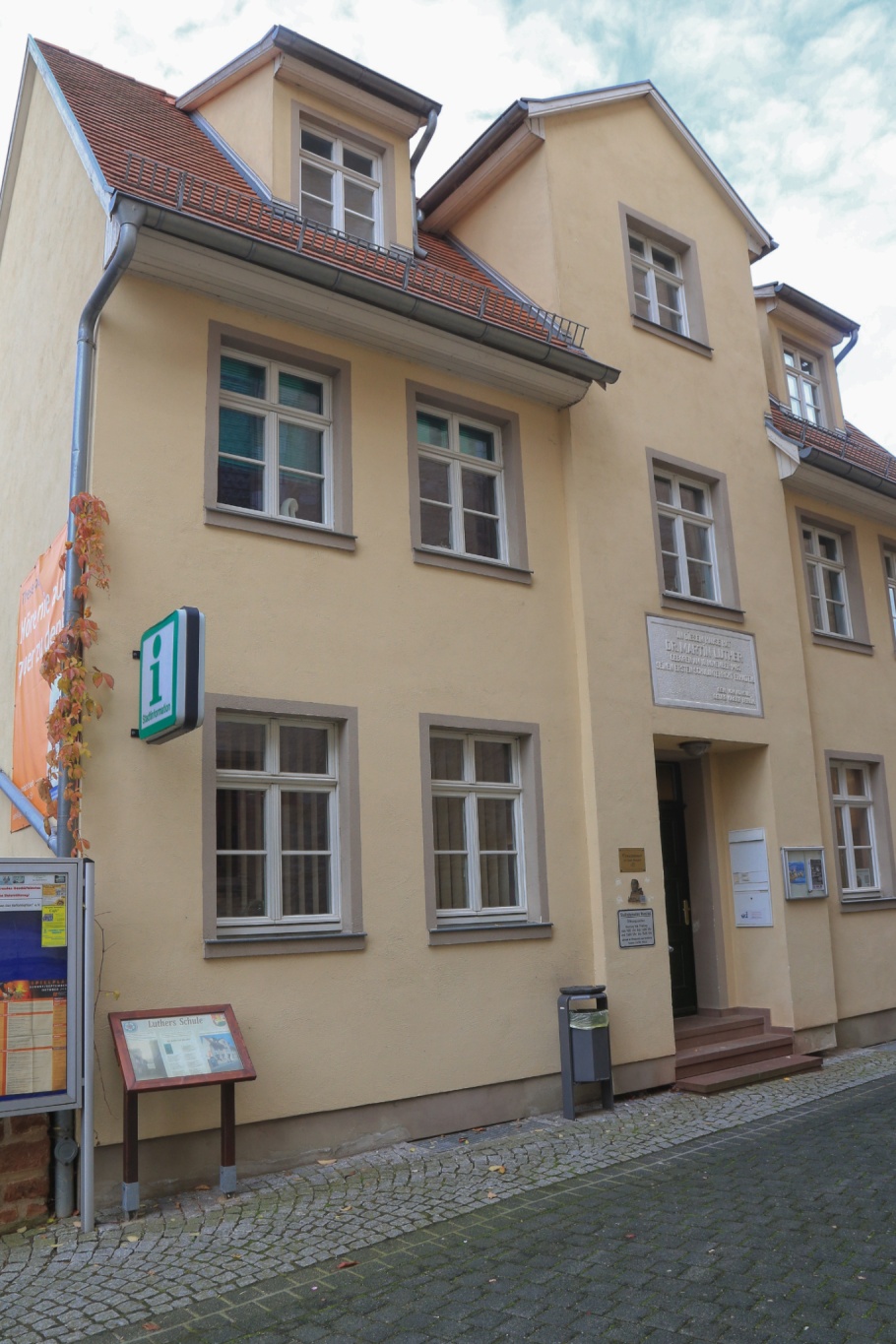 Tourist-Information Mansfeld, which was once Luther’s 1st school

Consecrated in the second-half of 1497, the town’s main church honours St. George (the dragonslayer) as the patron saint of Mansfeld. Also venerated is St. Anne, mother to Mary (Christ’s grandmum) and the patron saint of miners. The church is also tomb for the counts of Mansfeld. After his trial at the Diet of Worms in 1521, Luther was declared “heretic” by the Holy Roman Empire, which in effect put a price on his head. He was willingly “kidnapped”, escaping quickly into exile at Wartburg Castle in Eisenach. In hiding, Luther adopted the name “Junker Jörg” (Squire George) in direct reference to St. George. 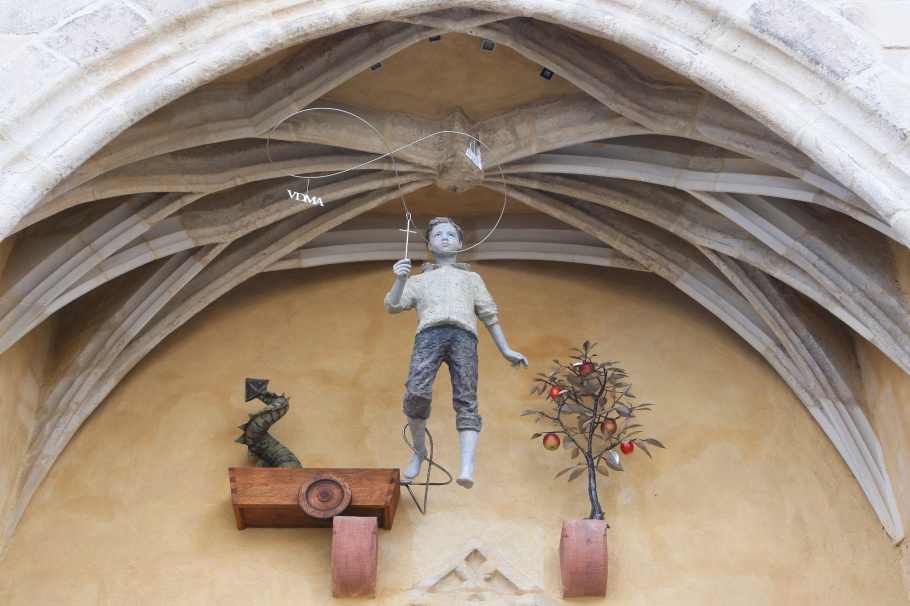 From about 1520, a large limewood sculpture of St. George slaying a dragon hung over the church’s north portal. The sculpture suffered years of weathering, forcing a move inside the church for protection. To replace the St. George relief, church authorities commissioned new work by way of a sculpture created by artist Marc Fromm. Unveiled in 2016, the sculpture “Martin Luther als Treckejunge” (“Martin Luther as young trekker”) symbolizes Luther’s life and work as a long journey. While symbolic, it’s worth pointing out Martin never worked in the local mines, although boys and young men often worked demanding manual labour to drag rock and other materials out of mines. The 1.2-metre (4-foot) high sculpture includes a young Martin holding a small crucifix, accompanied by a mining cart with a dragon tail to represent the “good hunt to slay evil” and an apple tree to represent “tree of life.” The letters “VDMA” is a Latin acronym, “Verbum Domini Manet in Aeternum” (“God’s word is eternal”), used as greeting by members of the Protestant Schmalkaldic League in the middle of the 16th-century. Additional description (in German) of the sculpture is located here.

Due to ongoing interior renovations and reconstruction, the church interior was closed at the time of my visit in late-2016.

The sculptor Paul Juckoff began construction of a fountain and memorial dedicated to Martin Luther. The limestone structure consisted of three bronze reliefs to represent the three stages of Luther’s life: (1) “out into the world”, when Luther left Mansfeld at the age of 13 for Magdeburg; (2) “into the struggle”, when Luther posted his 95 Theses, changing religion and Europe; (3) “through to victory”, as Luther became the great Reformer, avoided the death sentence as “heretic”, and helped translate the Bible fully into the German language. The Luther fountain in Mansfeld was inaugurated in November 1913.

Hinaus in die Welt (out into the world): “protecting” young Martin are portraits of his parents and a sculpture of St. George on his horse.

Mansfeld Castle is on a rock spur some 40 to 50 metres above the town. The castle grounds contains ruins of a fortress, ruins of three castles from the Mansfeld noble family (who governed the region until the 18th-century), and the preserved castle church.

In the 16th-century, the counts of Mansfeld were among the most influential nobles in the German Holy Roman Empire, but the year 1501 saw a division into three new family lines: Vorderort, Mittelort, Hinterort. Construction of three separate castles began in 1518 and completed in 1532. With the rise of the Reformation, the counts of Mansfeld-Mittelort and -Hinterort followed suit, but the count of Mansfeld-Vorderort stuck with Catholicism. Martin Luther likely visited the Castle with his family when he was a boy, but he was a frequent guest as an adult (as “The Reformer”). In his final visit in December 1545, he mediated a dispute among the Mansfeld counts. Already in bad health, he subsequently made his way to Eisleben, and died weeks later in February 1546.

The castle site is now owned and run by the evangelical organization CVJM Sachsen-Anhalt, and in 1997, the Förderverein Schloss Mansfeld association was established.

West-northwest view from the castle

The spacious site is perfect for weddings and events. Unfortunately, the operating organization recently refused to allow gay and lesbian couples to have weddings on site, despite objections by town officials and Saxony-Anhalt’s Minister of Justice and Equality (Mitteldeutschland Zeitung, 7 April 2017).

From Eisleben, driving to Mansfeld takes 20 to 25 minutes. With VGS Südharzlinie public transport, it’s about 50 minutes with Bus 420 (Eisleben-Mansfeld-Hettstedt); look for scheduled times between stops “Eisleben Bahnhof” and “Mansfeld, Oberstadt”. Click on the arrow-window icon at the upper-left corner of the map below for the legend.

1 In his thirties, Martin changed his surname from “Luder” to “Luther”, because the noun “Luder” had unsavory meanings and “Luther” was similar to the Greek word “Eleutherius“; see also Deutschlandfunk interview with Dr. Jürgen Udolph in German on 9 May 2016.

Thanks to IMG- and Sachsen-Anhalt-Tourismus, the town of Mansfeld for access to both museum and castle, and Anja Ulrich (Tourist-Information Lutherstadt Eisleben und Stadt Mansfeld e.V.) for guiding both Eisleben and Mansfeld. I made the photos above on 27 October 2016. This post appears on Fotoeins Fotografie at fotoeins.com as http://wp.me/p1BIdT-9H2. IMG- and Sachsen-Anhalt-Tourismus supported my visit to the German federal state of Saxony-Anhalt from 25 October to 3 November 2016 inclusive. I also received assistance from the cities of Eisleben, Mansfeld, Dessau, Wittenberg, and Halle (Saale).