Arriving by German rail or on Rhine river cruises, visitors to the city of Worms (pronounced ‘VOHRmz’) will likely sample the crisp wine from the surrounding Rheinhessen region; learn about the 5th-century Nibelung saga; see important religious symbols including the “crown” that is St. Peter’s Cathedral, and remaining structures from the once-thriving Jewish community which along with Speyer and Mainz formed a medieval league of Jewish communities. Many will retrace Martin Luther’s steps in the city.

In April 1521, Luther was ordered to appear at the Diet (Imperial Parliament) convening in Worms. In the presence of Holy Roman Emperor Charles the Fifth, Luther held firm against charges of heresy and refused to recant. What’s amazing is that Luther survived the triumphant journey from Wittenberg to Worms and, with his subsequent status as “outlaw” from the imperial edict following the Diet, Luther survived departure from Worms because his benefactor, Friedrich III, secretly arranged for Luther to be “kidnapped” and brought to safety at the Wartburg Castle in Eisenach.

Worms is home to the world’s largest monument dedicated to the Reformation. Unveiled in mid-1868, German sculptor Ernst Rietschel created the monument with the assistance of Adolf von Donndorf, Gustav Kietz and Johannes Schilling. The entire monument is on a raised square base 12.55 metres (41.2 feet) on a side for a surface area of 157 square metres (1695 square feet). An information pillar provided by the city provides a short description of the monument in four languages.

(English) Luther Monument : The international memorial to the Reformation, 1868. Luther’s hymn, “Ein feste Burg ist unser Gott / A mighty fortress is our God” is transformed here into stone. Dr. Martin Luther towers over the earlier reformers, surrounded by electors and friends as well as personifications of the important cities of the Reformation.

Listed below are 12 major statues representing people and cities supporting the early-Reformation movement and subsequent evolution to Protestantism.

Luther/Reformation Monument facing northwest. Statues for Waldo, Wycliffe, and Speyer are at the back and not seen in this view.

Luther Monument, schematic with 12 major statues (described below). In this orientation, north is pointed to the upper-right.

Martin Luther is at the centre of the monument for his primary role in the 16th-century movement; Luther stands on a high pedestal and holds a fist to the Bible referring to his trial at the Diet of Worms in 1521. His stare is directed to the scene of the trial at the former location of the Bishop’s Palace.

Directly below and around the Luther statue are statues of his European predecessors whose respective efforts to reform the Church helped pave the way for Luther: France’s Waldo, England’s Wycliffe, Italy’s Savonarola, and the Czech Hus. Unlike some of these gentlemen, Luther survived the “triple threat”: excommunication from the Catholic Church, exile (in Wartburg Castle), and (multiple threats of) execution. 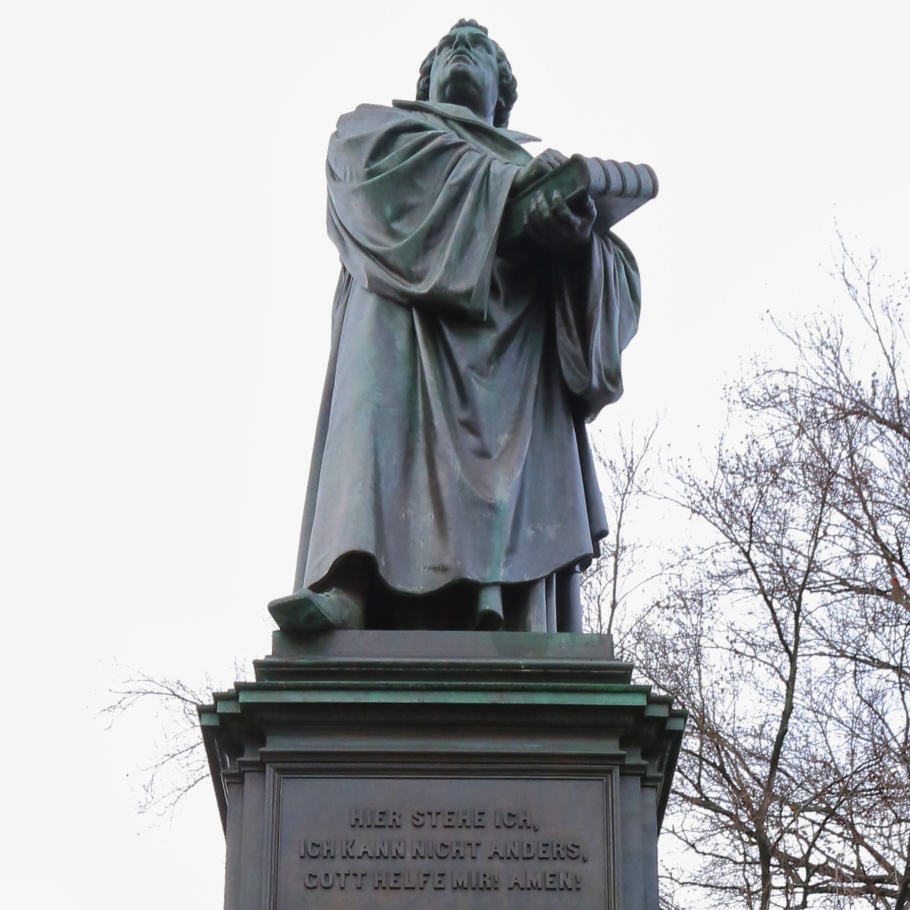 The front-facing panel under Luther’s statue depicts Luther’s 1521 trial in Worms in the presence of Holy Roman Emperor Charles the Fifth (Karl V). Construction of the monument began in 1856 (“begonnen”) and completed in 1868 (“vollendet”).

As the earliest of Luther’s predecessors, the 12th-century French merchant known as Petrus Waldus (Peter Waldo) surrendered his wealth and founded the Waldensian (Poor Men of Lyon) movement which favoured simple living while rejecting common doctrine (i.e., paying indulgences to escape purgatory). For his troubles and continuing to preach without approval from Rome or from regional authorities, Waldo and his followers were forced to leave Lyon for the Piedmont, southern France, and northern Italy. Waldo was excommunicated by Pope Lucius III in 1184.

University of Oxford scholar and professor John Wycliffe is best known as (one of) the first to translate the Bible from Latin to English. He openly questioned the church’s authority over earthly holdings and on civic matters. After condemnation by the Pope, local church officials, and the university, he went into seclusion and died in relative obscurity in 1384. He was posthumously declared a heretic in 1415, and the Catholic Church ordered all his writings be burned. In 1428, Pope Martin the Fifth ordered exhumation; Wycliffe’s bones were unearthed and burned, and the ashes were thrown into the nearby river.

Working in Florence, the Italian friar Girolamo (also Hieronymous) Savonarola fought against church corruption, authoritarian rule of the Church, unfair treatment of the poor, excess and decadence. The “bonfire of the vanities” commonly refers to the collection and public burning in Florence of fancy dress, ornaments, books, and art on 7 February 1497 during the Mardi Gras festival. After continual refusals to comply with Rome, Savonarola was excommunicated by Pope Alexander VI in 1497. For his aborted and failed attempt to convert Florence into a reformed state, the citizens turned on Savonarola in 1498; he was arrested, tortured, hung, and burned.

Because his writings survived, Wycliffe’s work became familiar to Czech scholars. Jan Hus (John Huss) of Prague’s Charles University became influenced by Wycliffe and subsequently began the Boheman Reformation movement. By most accounts, Hus would have had the greatest influence on Luther. Like Wycliffe, Hus denounced church immorality and practices of selling indulgences and ecclesiastical privileges, and supported the idea that the church was about the people, and not about priests, bishops, or the Pope. For refusing to stand down and continuing to espouse Wycliffe’s “heretical opinions”, Hus fell out with the (German-controlled) University and was excommunicated by Pope Alexander V in 1410. Using the common Czech vernacular instead of German or Latin, he continued to preach in Bethlehem Chapel in Prague. Hus was summoned to the Council of Constance in 1414 to answer charges of heresy. Upon arrival, Hus was arrested and held for a year. After a mock trial, he was burned at the stake on 6 July 1415, which would prompt the Hussite Wars a few years later. Luther most certainly had Hus in mind when the former was summoned in 1521 to Worms to answer charges of heresy. The Czech people hold Hus in high regard for his independent stance against the long-standing stranglehold of both religion (Catholic church) and external rule (German-dominated Holy Roman Empire). Jan Hus Day is marked annually on the anniversary of his death by burning. 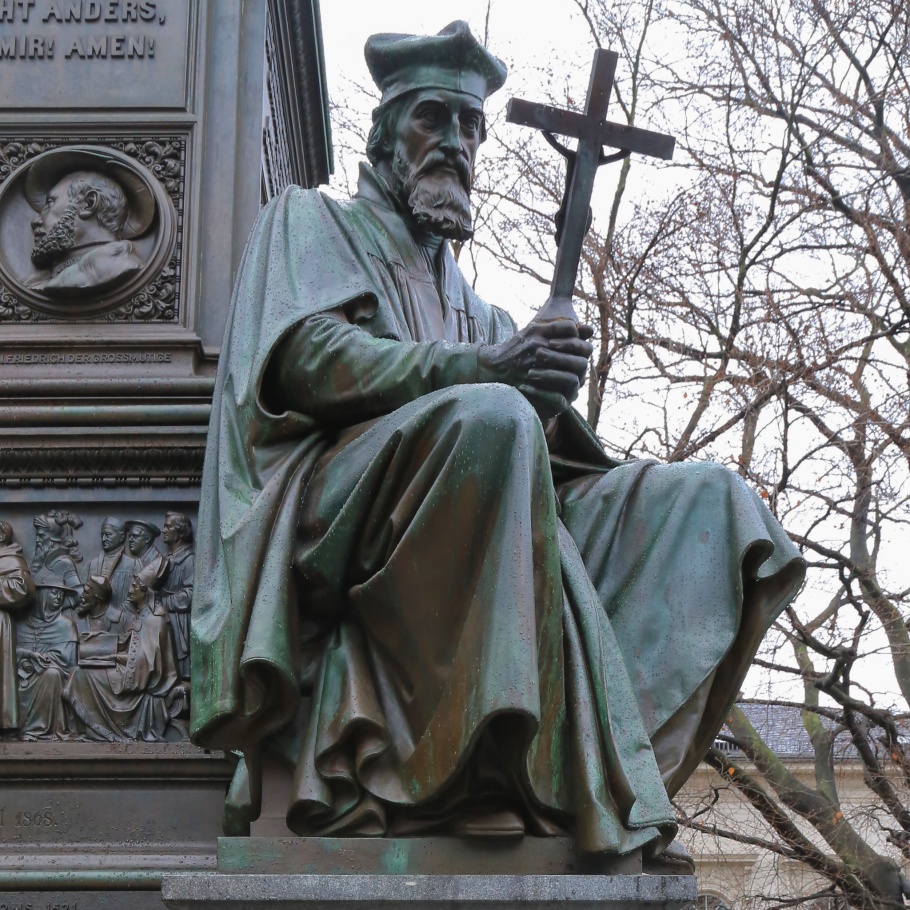 Although he remained Catholic until his death, Friedrich III (known also as Friedrich the Wise) was the Elector of Saxony and Luther’s contemporary and benefactor. Friedrich III founded the University of Wittenberg in 1502, brought Luther to Wittenberg University as theology professor in 1512, and persuaded Philipp Melanchthon to the university to teach Greek in 1518. In 1521, Friedrich III arranged to have Luther “kidnapped” and brought without harm to the Wartburg Castle in Eisenach after Luther was declared an outlaw after his trial at the Diet of Worms. It’s impossible to gauge what further effect and role Luther and his colleagues would have played in the early Reformation had Friedrich III not intervened.

Following Luther’s debate with Cajetan in 1518 and declaration of the Augsburg Confessions in 1530, the city of Augsburg was again an important site where a peace treaty in 1555 between Holy Roman Emperor Charles V and the Schmalkaldic League was signed (see Philip I below). The treaty ended the struggle between Catholics and Protestants, and made Protestantism official within the Holy Roman Empire. A key principle from the Augsburg Peace of 1555 was the statement “cuius regio, eius religio“, where local rulers were allowed to choose Lutheranism or Catholicism as the faith of practice for their respective states.

As a proponent of humanism and an academic expert in Greek and Hebrew languages, German scholar Johannes Reuchlin was the great-uncle of Philipp Melanchthon, providing great influence on the latter’s education and future calling. A common practice of the time, Reuchlin converted his surname into the Greek “Capnion”, a practice which his great-nephew would also follow. Reuchlin also recommended Melanchthon to the University of Wittenberg to become professor of Greek and Hebrew in 1518. Reuchlin quietly supported the printing and distribution of books in Hebrew at a time when his opponents wanted Jews to convert (by force) to the Reformation. 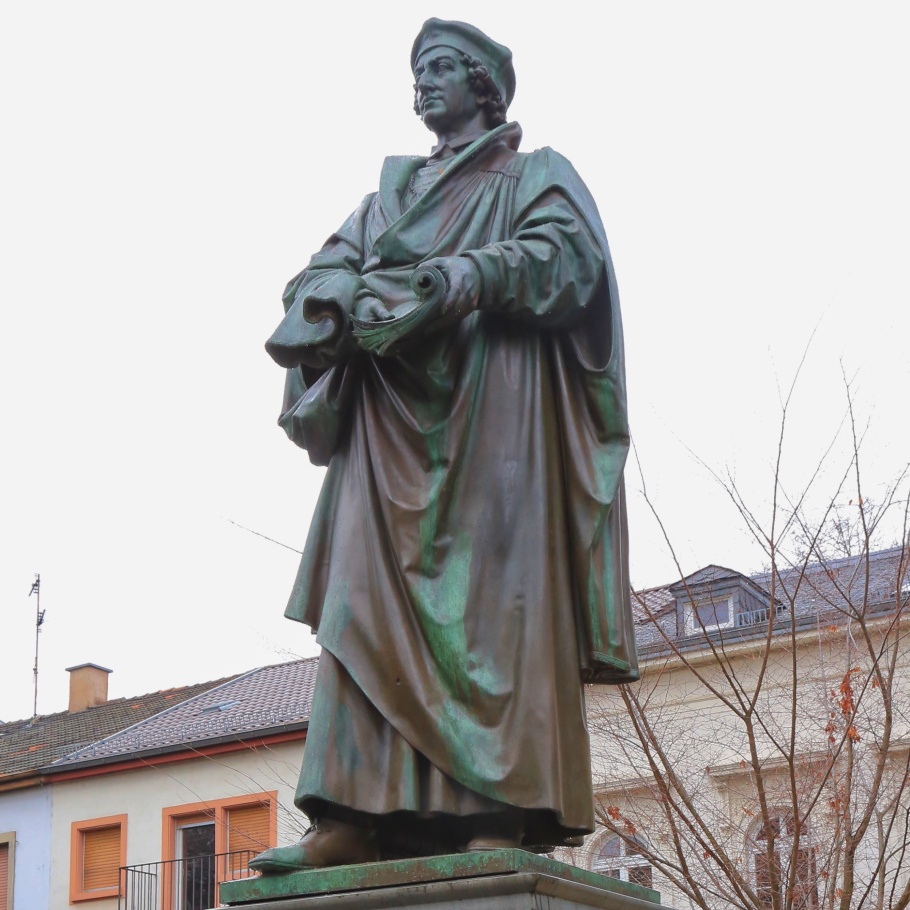 At the Diet assembled in Speyer in 1529, six princes and 14 Imperial Free Cities lodged an official protest against the ban on Martin Luther declared by the Diet of Worms after Luther’s trial in 1521. The Reformation delegates refused to agree to demands to return to Catholic principles, and eventually submitted a “Letter of Protestation”. Followers of the Lutheran movement became known as “Protestants”, and the movement itself would be called “Protestantism.”

Considered the “Second Reformer” after Martin Luther, German Philipp Melanchthon studied Greek and Hebrew; he changed his surname from the German “Schwartzerdt” (‘black earth’) to the Greek version “Melanchthon.” He became professor in Greek and Hebrew in 1518 at Wittenberg University after recommendation from his great-uncle Johannes Reuchlin. He turned his interests to theology and began lecturing on the subject after securing a degree in theology from the university in 1519. A major figure in helping Luther to translate the Old Testament into German, Melanchthon was also an important player in drafting the Augsburg Confessions in 1530. He would be known as “Praeceptor Germaniae” or “Germany’s teacher” for his lifelong dedication to reorganize standards of education for the general public. 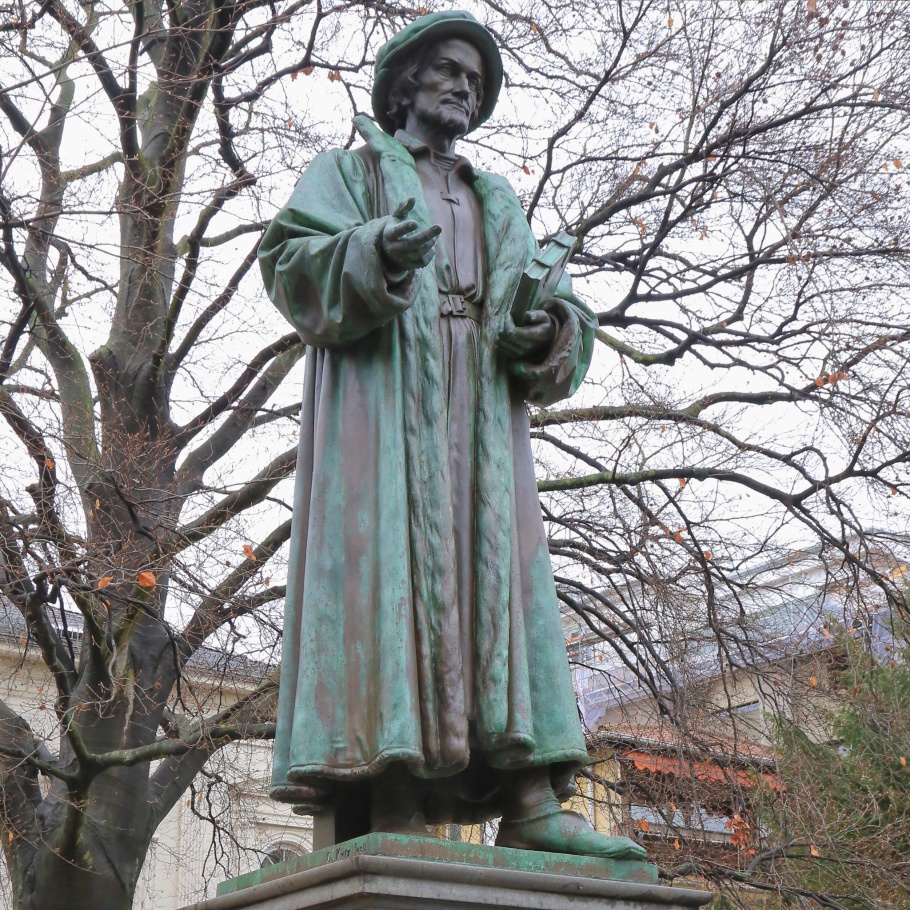 Magdeburg was one of the first cities in medieval Germany to convert from Catholicism to Protestantism. At the city’s request in 1524, Luther gave two sermons which inspired most of the city’s churches to convert to the new Lutheran movement within weeks. As a loyal supporter of Protestantism, Magdeburg was sacked and destroyed by Catholic troops during the Thirty Years’ War. The mourning statue acknowledges the city’s destruction in 1631.

Philip I was an important supporter of the early Reformation, and would become leader of The Schmalkaldic League. Formed in 1531, the League’s primary role was to protect lands practicing Reformed church services. His support for the Reformation was for reasons both religious and political. Philip I supported reforms at the 1526 Diet of Speyer, and was a leading “Protestant” at the 1529 Diet of Speyer. At the Diet of Augsburg the following year, Philip I represented the Protestants and supported the creation and reading of the “Augsburg Confessions” drafted by Philipp Melanchthon.

With regional trains, Worms is about 30 minutes from Mannheim and about 80 minutes from Frankfurt am Main (via Mainz or Mannheim). With a short 5-minute walk from Worms Hauptbahnhof (city’s main train station), the Lutherdenkmal memorial is located on a strip of green along the former city wall, and is open to the public free of charge.

Thanks to Tourist Information Worms for arrangements in the city and regional transport beyond, to Bettina Mauer for a guided tour of the city, and to Romantic Germany for their support in various cities along the Rhine river. I made the photos above on 21 and 22 November 2015. This post appears on Fotoeins Fotografie at fotoeins.com as http://wp.me/p1BIdT-8zw.