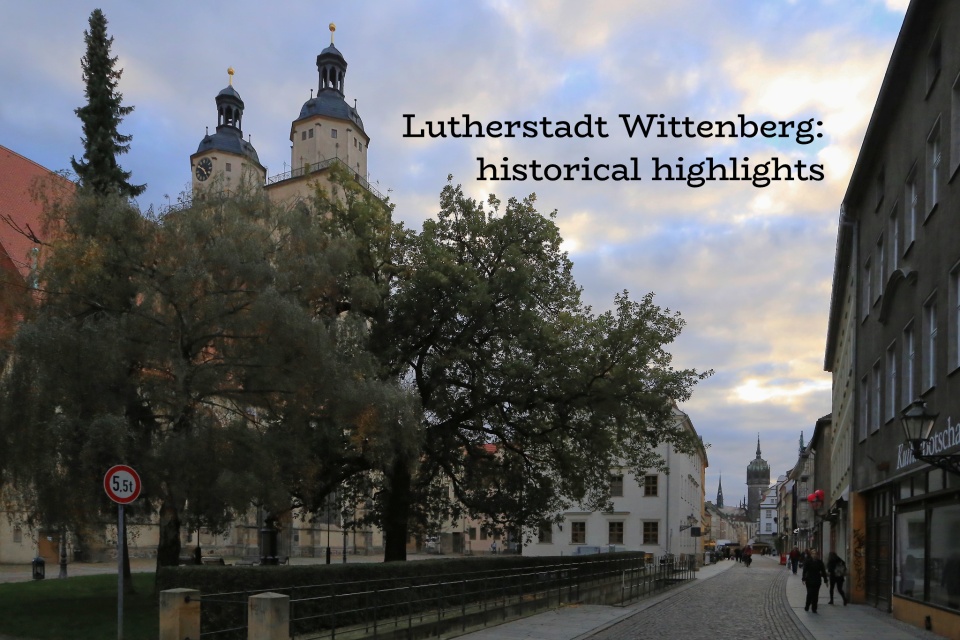 Above: Facing west from Kirchplatz, the Stadtkirche (City Church) and Schlosskirche (Castle Church) at upper-left and lower-right, respectively, are Wittenberg’s major landmarks.

If you’re thinking about or you’re already present in Wittenberg, two words have already provided the marquee reasons why you’re here at this blogsite and there in the town: Martin Luther.

The biggest reason why people will step foot in Wittenberg is to see and learn about how the Protestant and Reformation movement began and took hold, who the major players were, and what their roles were in the movement. For most, they’ll want to visit the four sites which form the basis for the town’s status as UNESCO World Heritage Site (WHS; see below). In addition to these four, there are other highlights for the curious and interested visitor, and all of them are easy to reach in the compact Old Town.

Considered the “Third Reformer” after Martin Luther and Philipp Melanchthon, John Bugenhagen was from 1523 the priest at Wittenberg’s Town Church (where he is buried), lecturer of theology at Wittenberg University, and Martin Luther’s personal adviser. He also became responsible for supporting the Reformation in northern Germany and Scandinavia. He was also known as Doctor Pomeranus for his roots in Pomerania (present-day northern Germany). Bugenhagen led the wedding service for Martin Luther and Katharina von Bora on 13 June 1525. At the northeast corner of the town’s Kirchplatz (Church Square) stands the Bugenhagen House with a sculpture of Bugenhagen nearby. Above the main door of the house a sign reads: 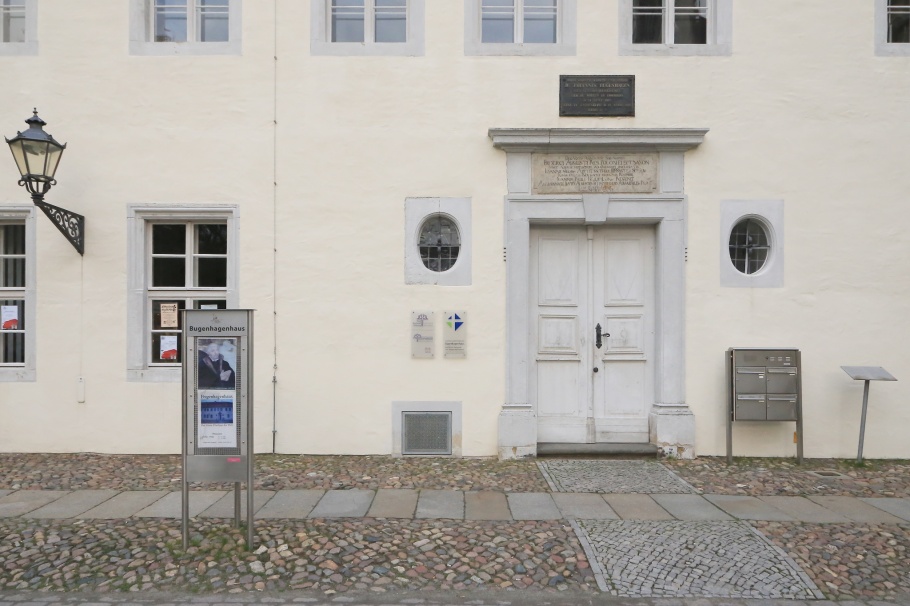 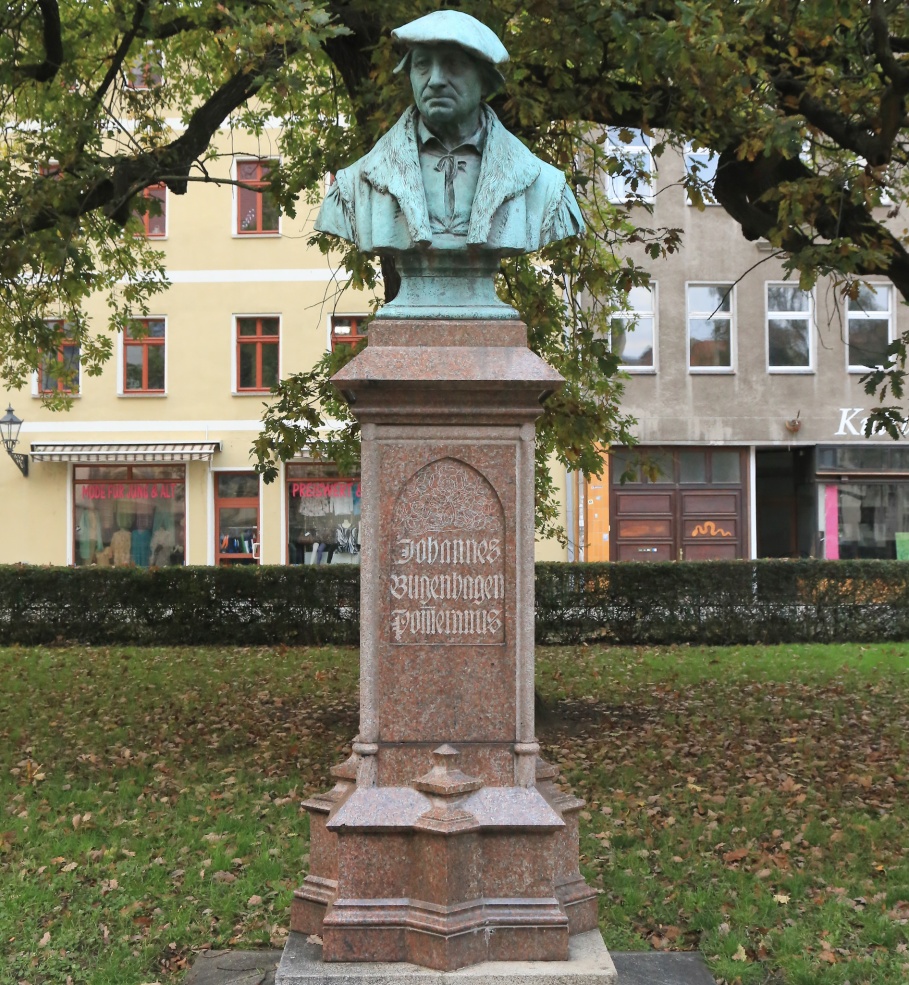 Lucas Cranach the Elder and Lucas Cranach the Younger were both renowned painters in medieval Germany. The Cranach family housed Katharina von Bora after she left the nunnery; the Cranachs became close friends to the Luther family. The Cranachs would also become painters and artists for the Reformation. Cranach Senior was also an astute businessman as he purchased a variety of properties in town. Of his many holdings, two are now owned by the town: Cranach the Elder’s first property at Markt 4 (Cranach House) which he purchased in 1512, and the town’s prominent property at Schlossstrasse 1 which would be his home, painting studio, printing workshop, and pharmacy.

In the courtyard at Schlossstrasse 1, two plaques read:

The sign over the door to the pharmacy reads: 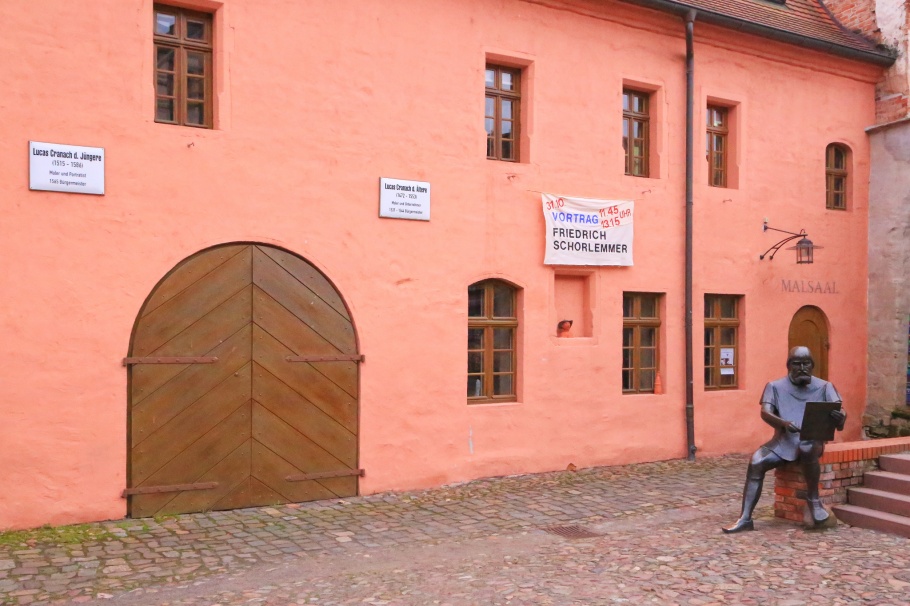 Cranach courtyard at Schlossstrasse 1, with statue of Lucas Cranach the Elder, by Frijo Müller-Belecke 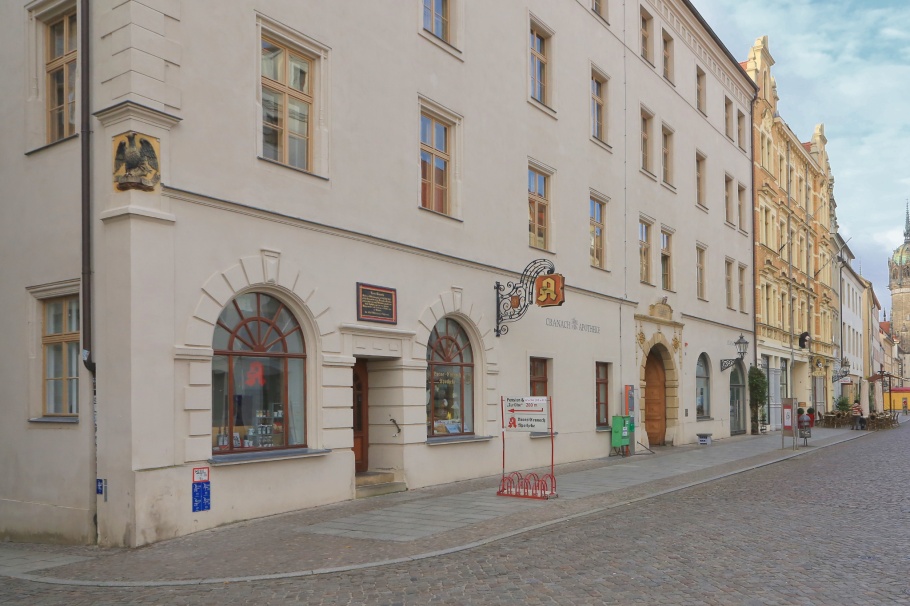 At the present location of the I.G. Schneider clothing store was a former hotel where luminaries such as Grand-Duke Karl August of Saxony-Weimar, French emperor Napoleon I, Russian writer Maxim Gorki, and German writer Friedrich Schiller once stayed. 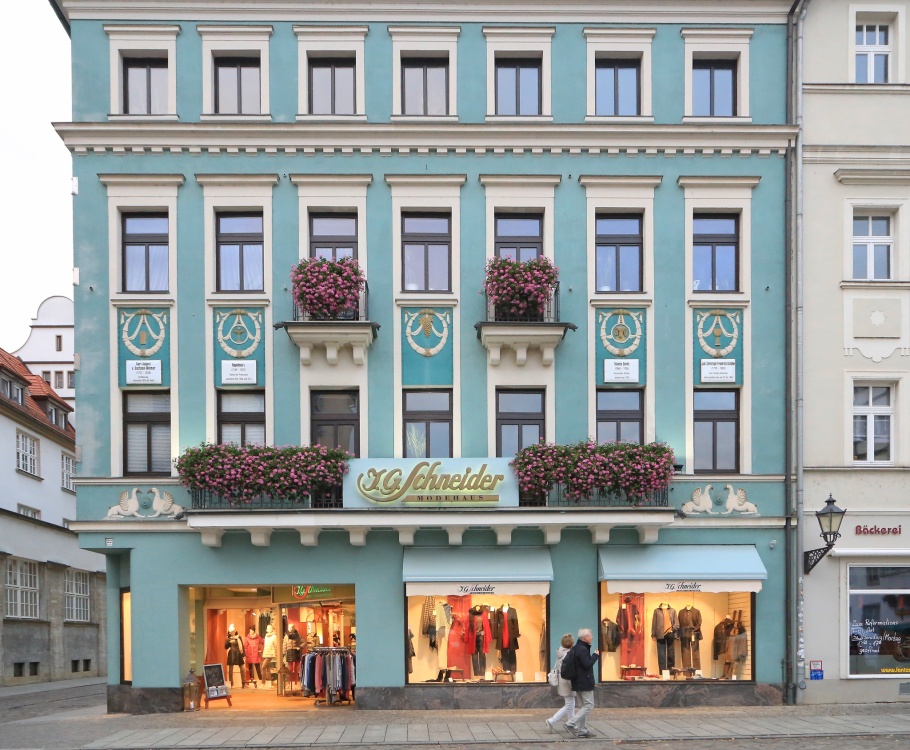 Frederick III (Elector of Saxony, also known as “Frederick the Wise”) founded in 1502 the “Alma Mater Leucorea“, known as Wittenberg University. The word “Leucorea” comes from the Greek “leukos oros” or “white mountain” in reference to the town’s name Wittenberg. The university would become a centre for arts, sciences, humanities, and theology, greatly helped by the arrival and presence of Martin Luther and Philipp Melanchthon. These two would help define the spiritual life of the university and town, and the university would become a vital centre for discussion and dissemination for ideas and spirit for the Reformation. The former “Fridericianum” university buildings would be converted to military barracks and residences. The site is now home to the Foundation for Public Law at the Martin-Luther University Halle-Wittenberg (Stiftung des öffentlichen Rechts an der Martin-Luther-Universität Halle–Wittenberg). 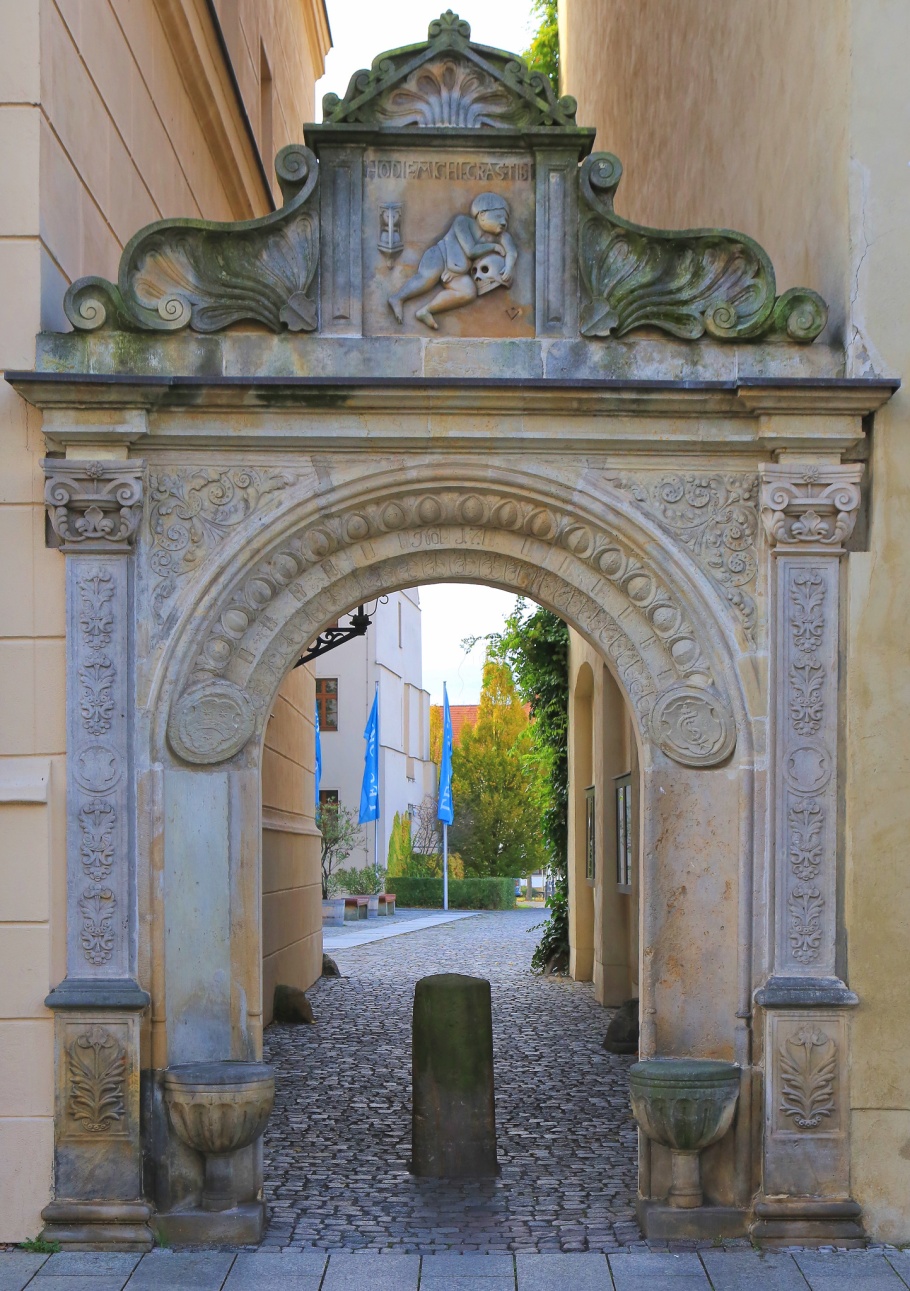 Leucorea (Fridericianum). A closer look at the top of the arch in the image below … 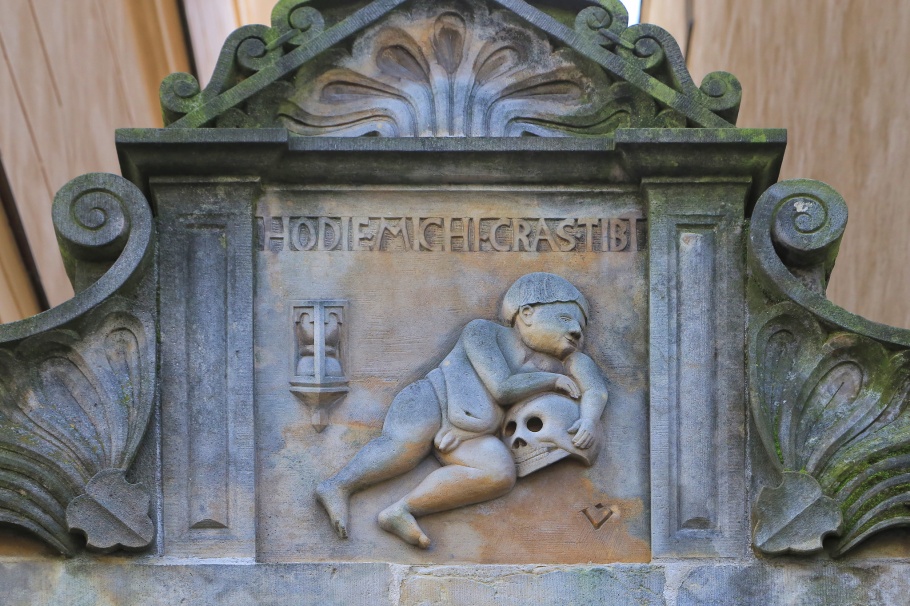 This location was one of the town’s former city gates, the Elster Gate, where it was common practice in Luther’s time (15th- to 16th-century) to burn the clothes of people who died from disease. In 1520 three years after his (apparent) posting of the 95 Theses at the city’s Castle Church, Martin Luther received a ‘papal bull’ warning him of excommunication from the Catholic Church if he continued his “heretical teachings.” Luther promptly burned the papal bull here in front of Elster Gate on 10 December 1520. Stories state that an oak tree was planted at the spot the following day. The tall thick oak tree in the picture below was planted in 1830 on the 300th anniversary of the Augsburg Confession (see Melanchthon). 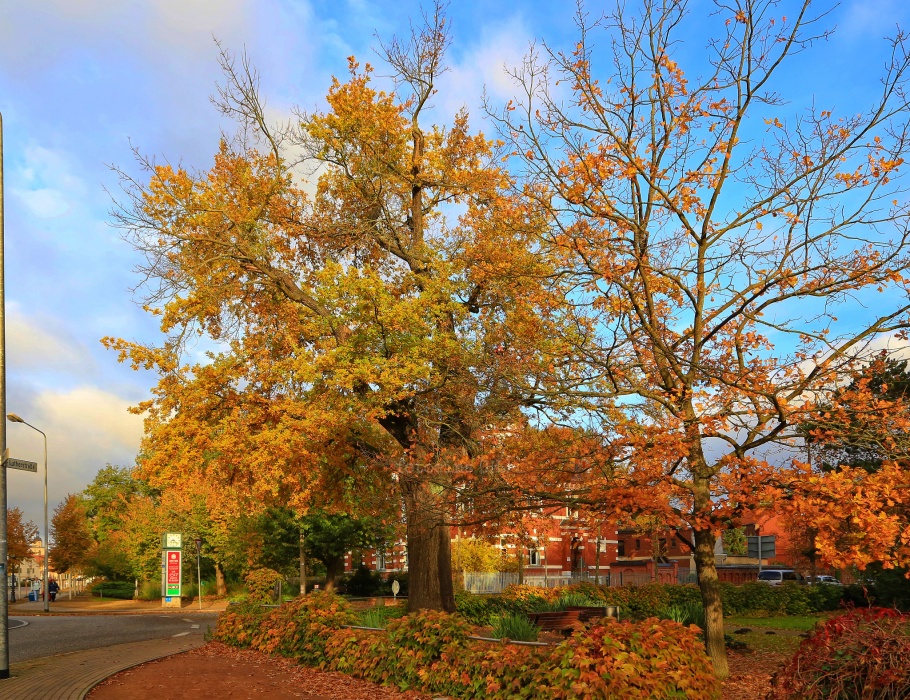 The town’s market square is the location for the Luther Monument (1821) which is thought to be the oldest Luther memorial in Germany. 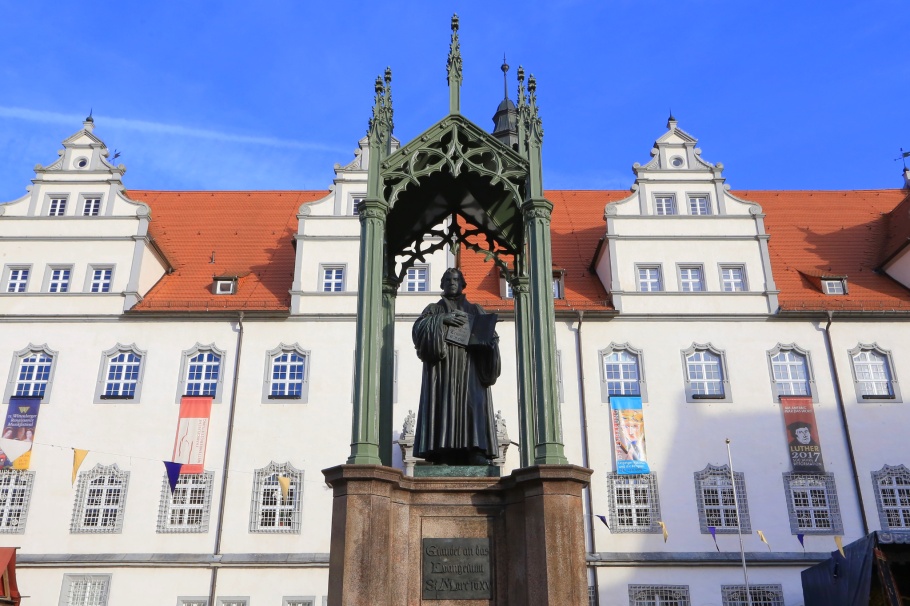 This house is where Martin Luther and his family lived, from his arrival in 1508 until his death in 1546. The building is now museum and testament to his family and to his work. Examples of his home- and work-life merge in and out of the various rooms within the house. Former nun Katharina von Bora married Luther and she eventually took charge of the household and its finances. Her support at home played a critical role in Martin’s life for which he was clearly most grateful; he referred to her as “meine herzliebe Käthe” or “my dearest Kate.” 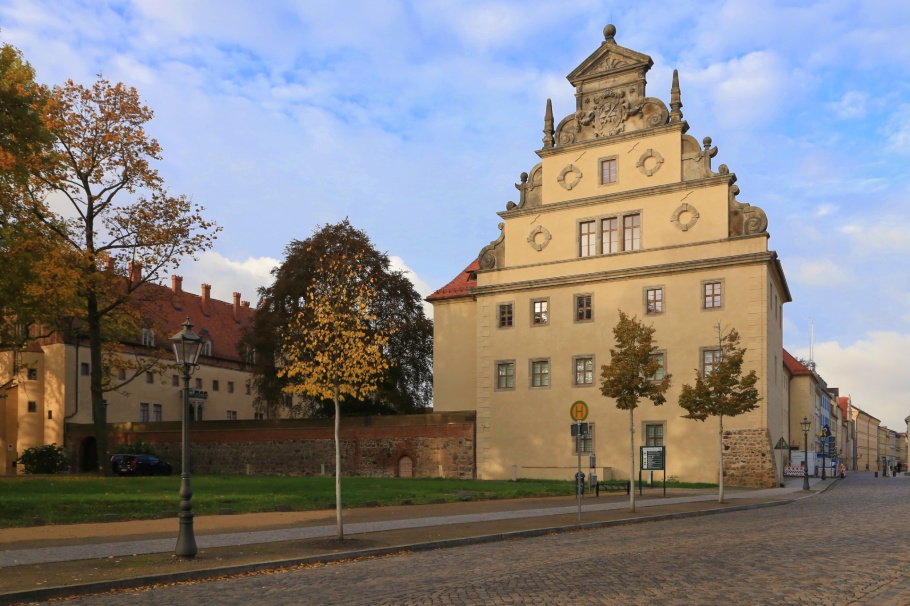 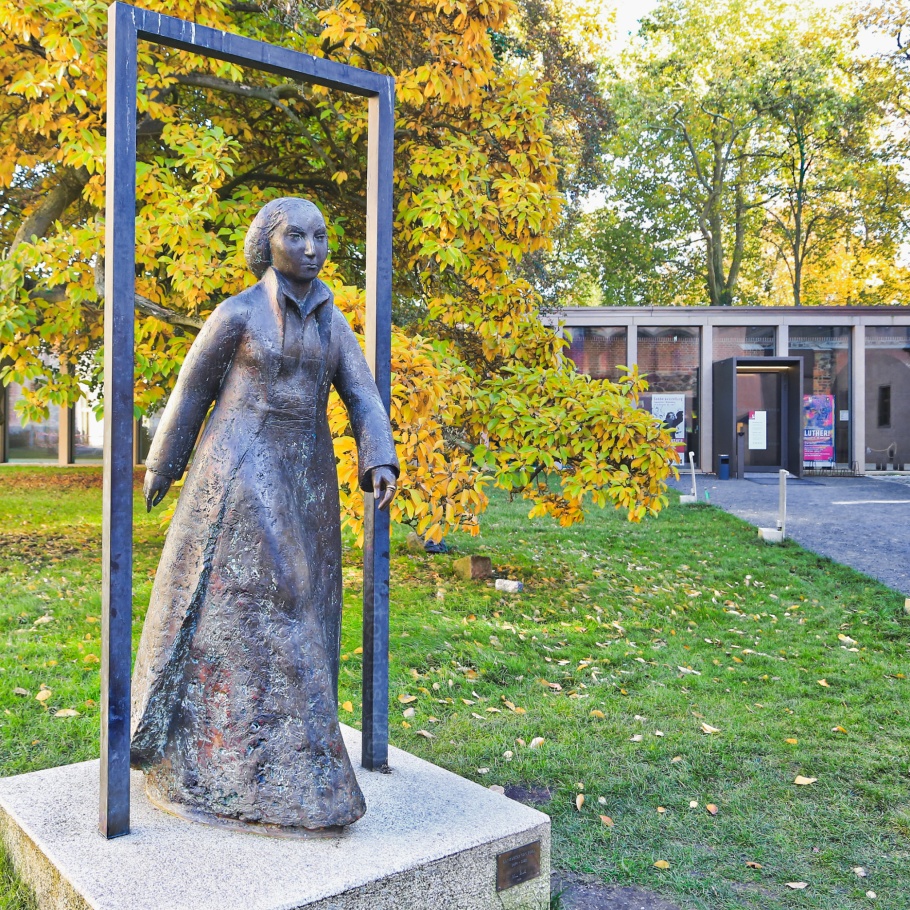 In the Lutherhaus courtyard is Nina Koch’s 1999 bronze sculpture of Katharina von Bora, Luther’s wife. By all accounts, Katharina was the brains of the Luther household. Photo on 30 Oct 2016.

Considered the “Second Reformer” after Martin Luther, Philipp Melanchthon studied Greek and Hebrew, and became professor in Greek in 1518 at Wittenberg University. He turned his interests to theology and began lecturing on the subject after securing a degree in theology from the university in 1519. A major figure in helping Luther to translate the Old Testament into German, Melanchthon was also an important player in drafting the Augsburg Confessions in 1530. He would be known as “Praeceptor Germaniae” or “Germany’s teacher” for his lifelong dedication to reorganize the education system. Wittenberg’s market square is also the location for the Melanchthon Monument (1865). 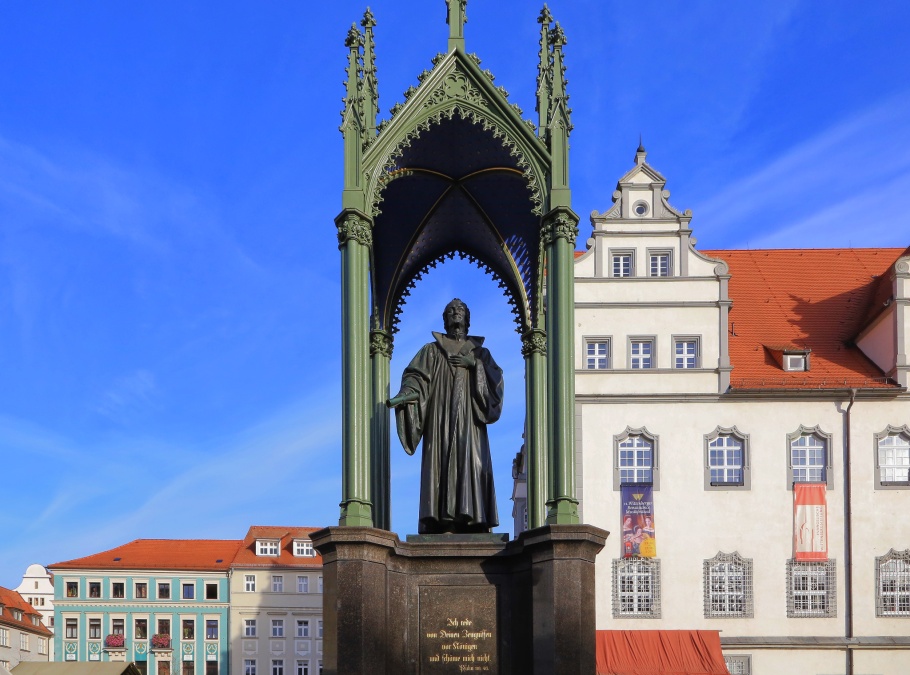 This house was built between 1536 and 1539 for Philipp Melanchthon and his family. The building now houses a museum dedicated to Melanchthon with exhibitions about his work and family life. 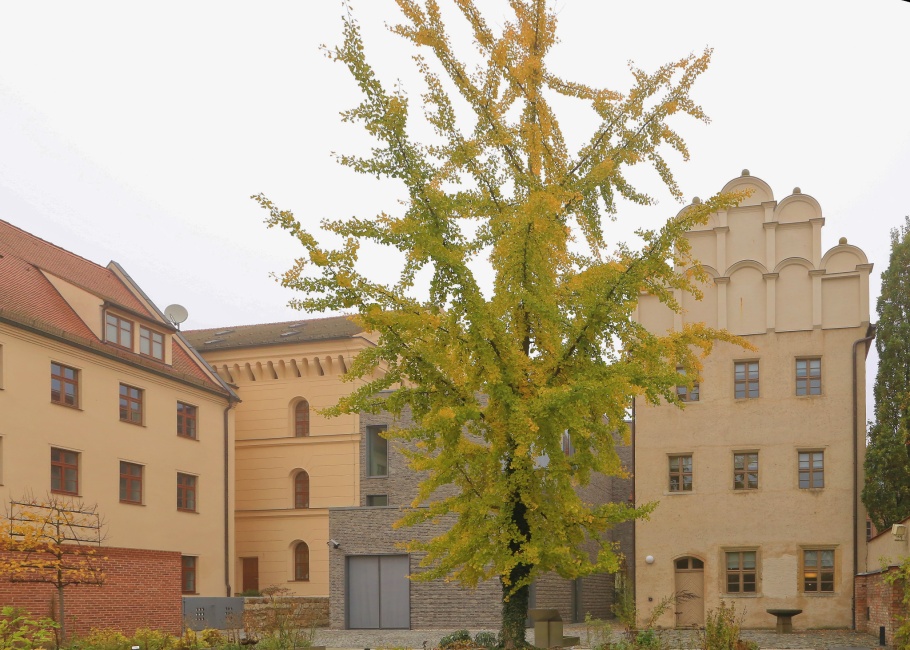 Like most towns, Market Square is the past and present focal point of the town’s activities for commerce, politics, and justice. The Renaissance-style Town Hall was built between 1523 and 1535, and the portico (“raised porch”) in 1573 comes complete with the sculpture of Justicia, the (Roman) goddess of justice, accompanied by six figures representing bravery, faith, hope, love, patience, and wisdom. The square is also home to the Luther monument (1821) and the Melanchthon monument (1865). 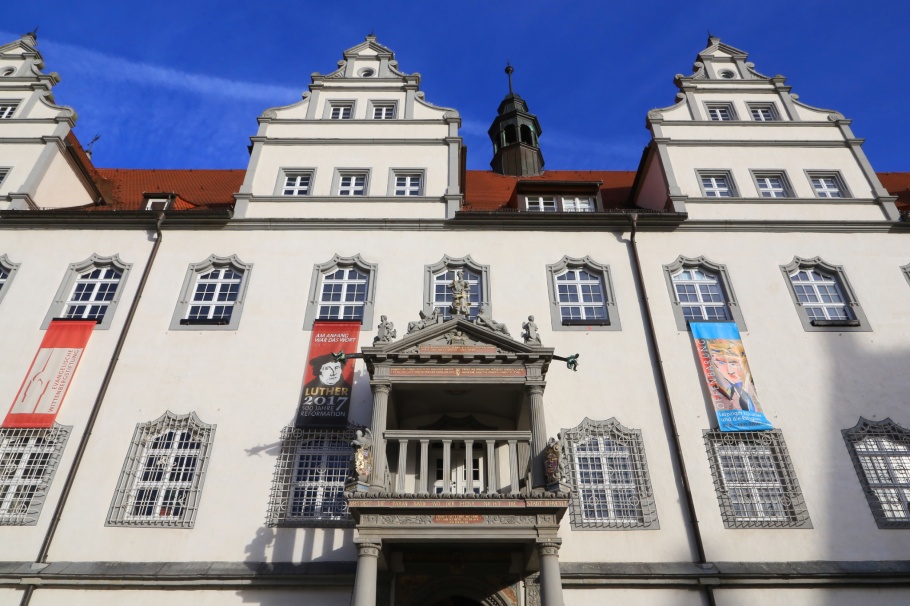 The Castle Church is best known as the location where Martin Luther apparently posted his 95 Theses. Constructed between 1489 and 1525 by Frederick III, the church was part of the original castle compound for the electors of Saxony. The church became the university’s church in 1503 with Protestant services beginning in 1524. The church is home to the graves for Martin Luther, Philipp Melanchthon, and Frederick III. I featured this city landmark in a separate post here. 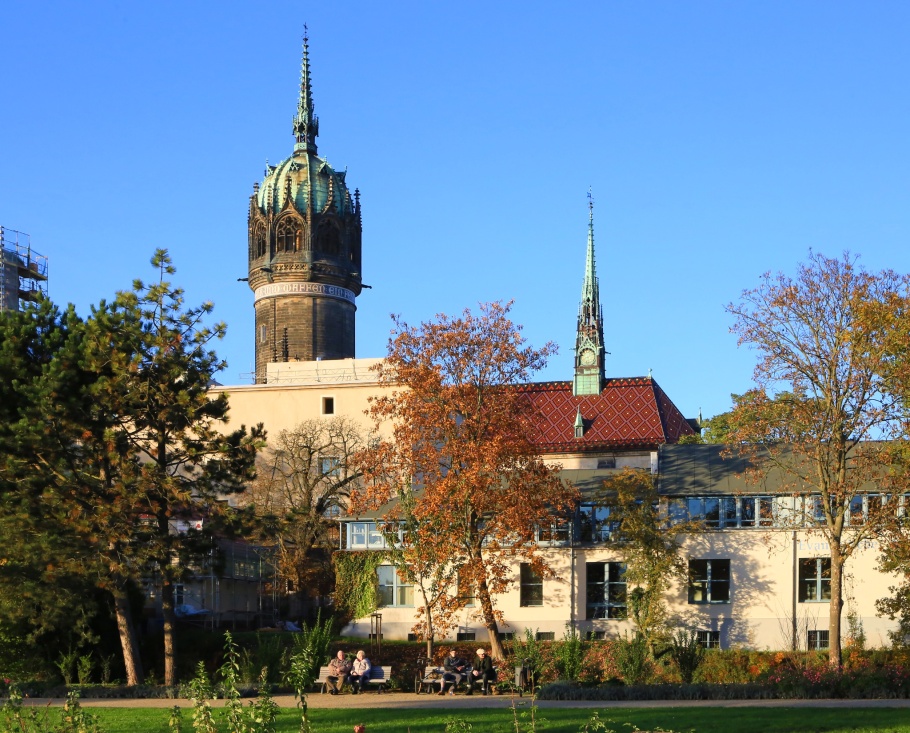 Castle Church, from the Luther Garden

In the Middle Ages (c. 14th-15th centuries AD/CE), the Rischebach and Trajuhnscherbach streams were diverted into the city for water-powered milling. Around the diverted streams were breweries, tanners, and dyers, as well as fishmongers who could keep fresh fish caught from the Elbe river. The city streams were closed in the late 19th-century for reasons of hygiene, but by the 1990s, plans to reopen the streams as free-flowing water through the city came to light, and by 2006, water flowed through the Altstadt along Coswiger Strasse and Collegienstrasse/Schlossstrasse. 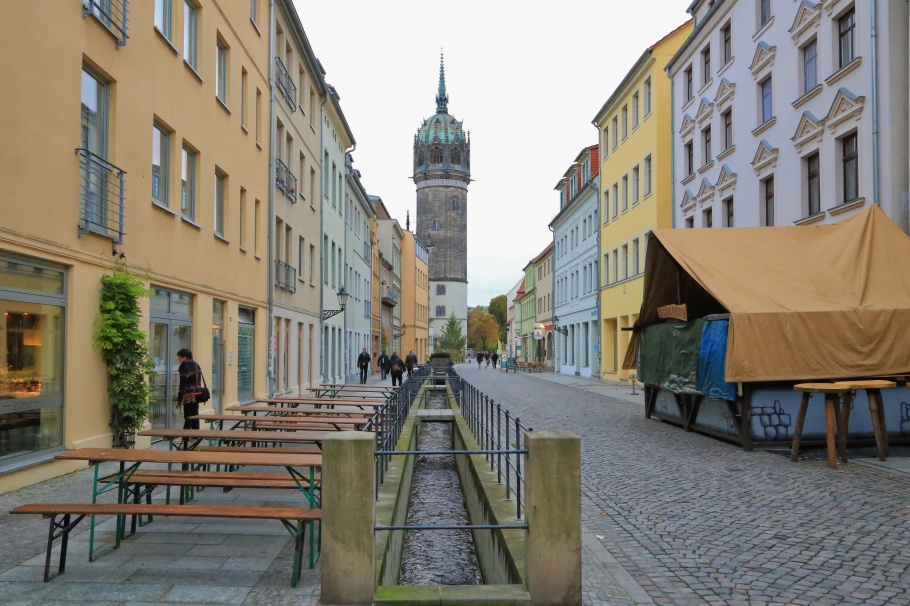 With the original St. Mary’s chapel built around 1280 AD/CE, the church is the town’s oldest building which houses the altar designed and built by both Cranach the Elder and Cranach the Younger. At a time when church services were conveyed only in Latin, the first mass delivered entirely in German is thought to have taken place in this church. I featured landmark in a separate post here. 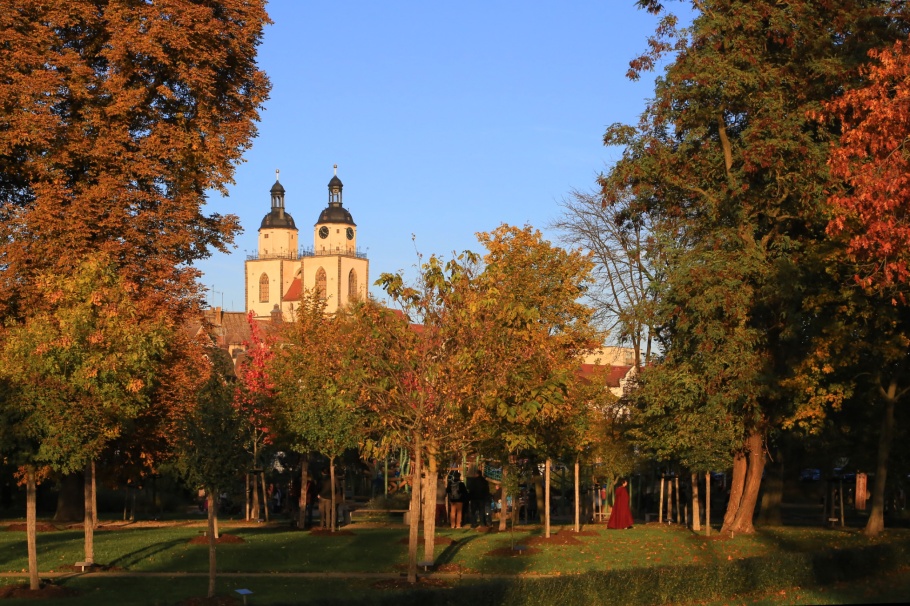 City Church, from the Luther Garden

Click the arrow-window icon in the upper-left corner of the map below to toggle for the legend. Note the two train stations near Wittenberg’s Old Town. “Lutherstadt Wittenberg (Bahnhof)” is the town’s main station served by InterCity Express (ICE) trains and regional trains. Located adjacent to the Luther Garden in the southern part of the Old Town, “Lutherstadt Wittenberg Altstadt” station is served only by regional trains.

My thanks to IMG- and Sachsen-Anhalt-Tourismus, the city of Wittenberg, and the Luther Hotel for their patronage and access to facilities. I made the photos from 29 to 31 October 2016 inclusive. This post appears on Fotoeins Fotopress at fotoeins.com as http://wp.me/p1BIdT-9ew. IMG- and Sachsen-Anhalt-Tourismus supported my visit to the German federal state of Saxony-Anhalt from 25 October to 3 November 2016 inclusive. I also received assistance from the cities of Eisleben, Mansfeld, Dessau, and Halle (Saale).

6 Responses to “Wittenberg: 13 historical highlights in the Lutherstadt”