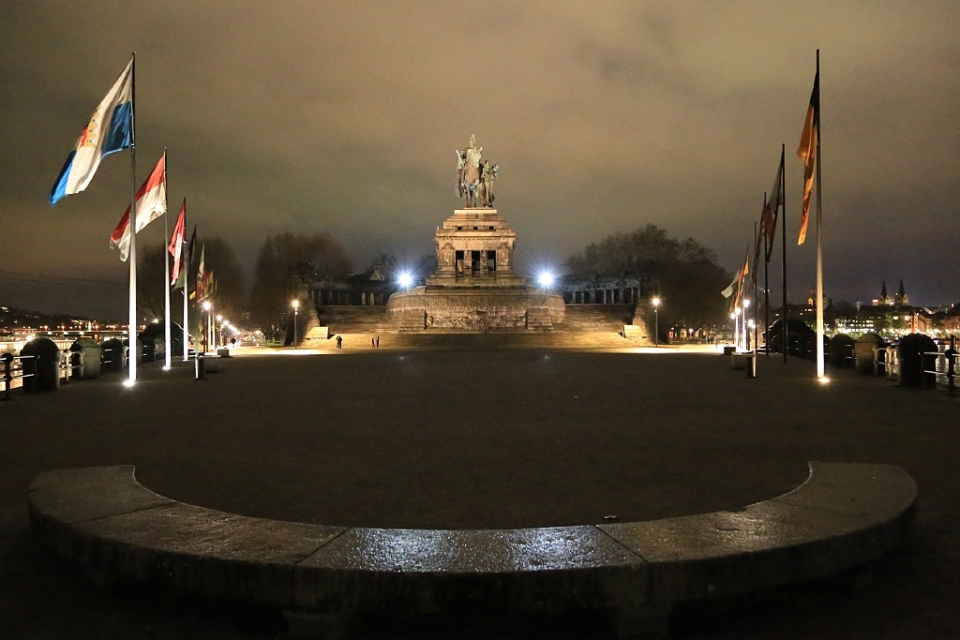 Koblenz lies at the confluence of the Rhine and Mosel rivers, which respectively are at the far-left and -right in the picture above. The present-day Deutsches Eck or “German Corner” includes the towering Kaiser Wilhelm Memorial (at centre in the picture above). Flags placed at the Deutsches Eck represent the Federal Republic of Germany, each of the 16 German federal states (Bundesländer), the European Union, and the United States of America (in place since late-2011). The monument and surroundings are a part of the designated UNESCO World Heritage Site for the Upper Rhine River Valley.

However, this city landmark is the second version of the Deutsches Eck, and that’s the subject for subsequent explanation.

Thanks to Koblenz Touristik and Romantic Germany for their advice and support. Koblenz is one of the cities in the Historic Highlights of Germany. I made the above photograph on 25 November 2015 with the Canon EOS6D, 24-105 zoom, and the settings: 1/10-sec, f/4, ISO25600, and 24mm focal length. This post appears on Fotoeins Fotopress at fotoeins.com as http://wp.me/p1BIdT-7Kd.